Welcome one and all to the latest installment of the NXT Spotlight here at TJRWrestling. We are just 48 hours away as I write this, from the loaded Takeover: Brooklyn card that will be taking place Saturday night. We obviously had a massive change to the card last week, but this is still potentially the best Takeover card ever. With just one last episode before the huge event, let’s get right to the action.

We start with a video package recapping everything that’s taken place with the NXT Championship in the last week. 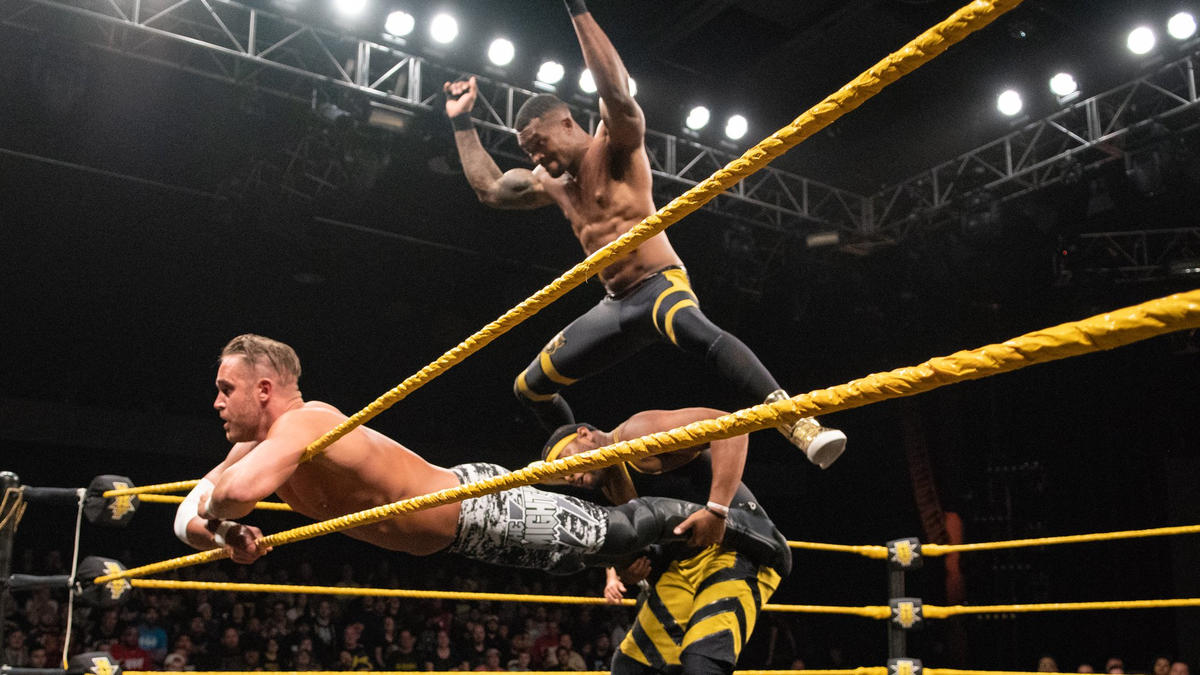 The Street Profits vs. The Mighty

Montez Ford and Nick Miller starting things off for us. Miller with the advantage right away and gets Ford in his corner. The Mighty start to double team him as Shane Thorne becomes the legal man. Thorne goes for a body slam but Ford slides out as Angelo Dawkins makes a blind tag. He sends Thorne down with a shoulder tackle and then they yell out “Wakanda!” as they do a double team back suplex into a moonsault onto Thorne. They then set up Miller in the ropes for the old World’s Greatest Tag Team leap frog. Goes back to Dawkins and Thorne as Thorne moves out of the way of Dawkins’ 360 splash and then gives Dawkins a lariat in the back of the head. Miller comes in now and works over Dawkins, even fish hooking him for a second before the ref has to break it up. The Mighty end up hitting a double back suplex on Dawkins for a two count. Miller with a nice looking spinebuster on Dawkins. Dawkins finally manages to avoid a charging Thorne in the corner and then makes the tag to Ford, who takes out both members of The Mighty. Great looking front flip over a bent over Thorne and then landing on his feet and clotheslining Miller over the top rope. Ford showing fantastic athleticism. Thorne rolls up Ford as he runs into Miller and grabs the tights. Ford is still able to roll through though and now Ford has the tights and he’s able to hold it for a three count.

K-Tank’s Take: This feud should continue with that finish. Montez Ford always does something to either entertain me or impress me with his athleticism. I don’t know if they’re destined for anything in NXT, but if they ever make it to the main roster, I think they’ll be huge.

We see Shayna Baszler backstage giving tips to Aliyah as Aliyah will be taking on Kairi Sane tonight.

We then go to The Undisputed Era. Roddy complains about having to face Moustache Mountain again. They think it’s hilarious that Trent Seven thinks he’s 100%. If he’s 100%, then they’re at least 500%. They also call out War Raiders for trying to call out the champions after the show. They think they’re clever, but that’s the first time idiots and clever have been put together. Adam Cole talks about how one year ago at Brooklyn, The Undisputed Era came together and now a year later, they’re running everything. They will continue to show everyone that this is their Era and that is Undisputed. 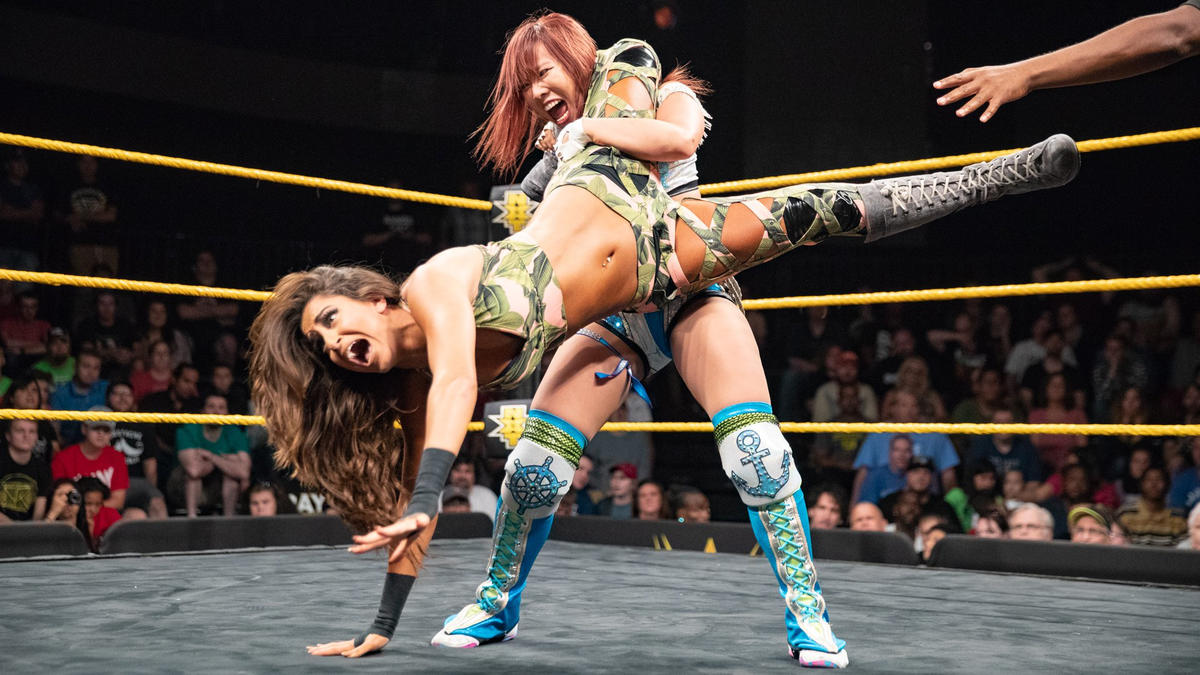 The champ makes her way to the announce table to get a bird’s eye view of this contest. Kairi is distracted early by Baszler being here and Aliyah gets the advantage. Kairi comes back quick though and ends up locking on a Stretch Muffler. You don’t see that very often. Aliyah gets the ropes though. Aliyah with multiple forearms but Kairi trips her down and then hits a couple seated Blockbusters. Kairi comes out of the corner with a spear. She starts to walk the plank and takes out Aliyah with the sliding forearm. She goes to the top rope and here comes the InSane elbow drop. That’s not enough though apparently as she stares down Baszler and here she goes back to the top and she drops a second elbow. That’s still not enough. Here’s number 3! Kairi with a pin attempt but pulls Aliyah up at two. Kairi not removing her eyes from Baszler as Baszler takes off her headphones and stares at Kairi locking on The Anchor and point at Baszler at the same time. Aliyah taps out.

K-Tank’s Take: Loved the story of Baszler being on commentary saying that Kairi has no killer instinct, meanwhile, Kairi is destroying Aliyah while not taking her eyes off Baszler. I really hope they have a great match at Takeover.

We get a video package hyping up the North American Title match between Adam Cole and Ricochet. 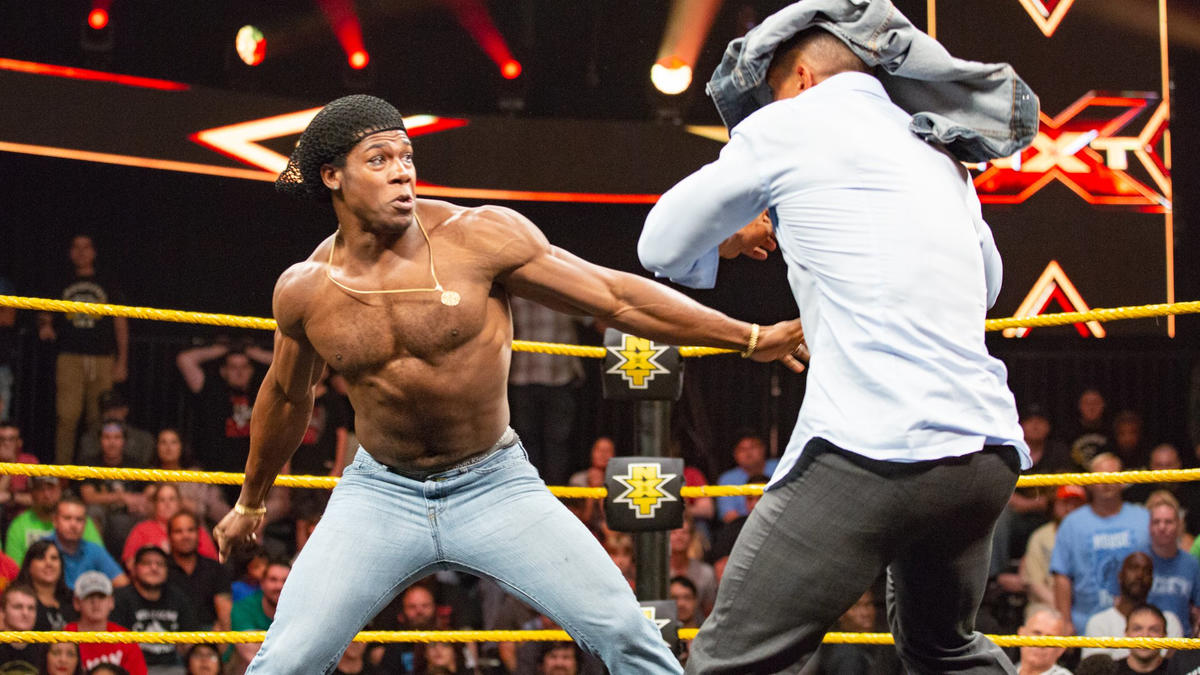 The Dream has come out with something to say. He laughs at the fans that cheer for him. He says they’re funny just like EC3. And just like the fans, EC3 has The Dream’s curiousity. EC3 also has something that no one should want and that’s The Dream’s attention. He’s made an enemy of The Dream. At Takeover: Brooklyn, it’ll be Dream Over. EC3’s music hits and here comes the man himself. EC3 asks is this what it sounds like when doves cry? What a great line. He then mocks Dream’s fanny pack. EC3 says he knows what Dream is trying to do and he shouldn’t. He’s trying to get in EC3’s head but that’s what EC3 does. He builds restaurants and parking lots and condos in people’s heads. Dream’s head is a real fixer upper but he’s going to turn it into a profit at Takeover. He will claim victory after victory after victory… Dream cuts him off and says there is no “after victory”. Dream says in Brooklyn, EC3 won’t have his hand raised and he won’t be laughing. It’ll be Dream Over. EC3 takes off his coat and tells Dream they don’t need to wait til Brooklyn. Dream gets ready for a fight and tosses his jean jacket at EC3 and charges him. Both men trades blows until EC3 gets Dream up for the 1% and drops him with it.

K-Tank’s Take: Tremendous segment with these two. The best interaction they’ve had and much needed as they head into the match on Saturday.

We go to Cathy Kelley who’s been reviewing the footage of Aleister Black’s attack. There’s various angles and basically there are camera angles of literally everyone on the roster, man and woman, that could possibly be a suspect.

We then get a video package for the Ciampa/Gargano match at Takeover.

After that we go to Bianca Belair, who is preparing for her return soon. They make the point that trainers at the PC are saying her attitude is almost unbearable.

Next week on NXT TV, it’ll be Pete Dunne vs. Zack Gibson for the UK Title. 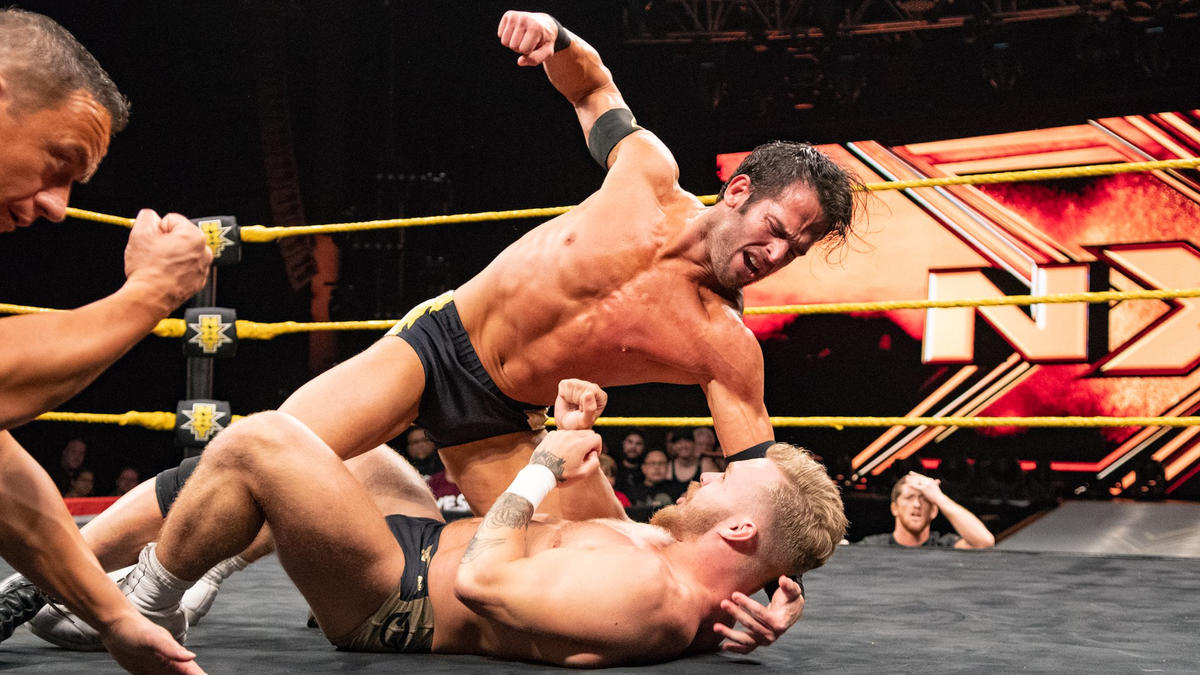 Both men’s partner is in their corner for this match. Bate starts immediately with a running big boot and is all over Strong. Bate with a huge back body drop on Strong and then multiple shots in the corner. Knee lift in the opposite corner, but O’Reilly gets involved, which allows Strong to pull Bate off the ropes and into a backbreaker. Strong with kicks and chops in the corner. Strong with a urinagi into a backbreaker for a two count. Bate with a couple headbutts and a jawjacker. Roddy comes back with a massive chop though and bets Bate on the top rope. He wants a superplex but Bate fights him off. Strong tries a second time but Bate throws him off with a front suplex and then comes off the top rope with a European uppercut. Both men trading blows until Bate lands his sucker punch. Bate with an exploder suplex out of the corner, followed by a running shooting star press, which gets a two count. Bate now tries an airplane spin but can’t hold Strong up long. Bate comes back though with a hurricanrana and then a Saito suplex. Bate tries for the Tyler Driver but Strong escapes. Bate with a big boot and then tries a rolling kick but Strong catches his legs and tries the Strong hold, but Bate turns that into a pin attempt. Strong with a high knee in the corner and then the reverse bodyslam for a two count. Bate reverses a suplex but can’t avoid a backbreaker. Strong tries for End of Heartache but Bate lands on his feet somehow! Bate then reverses a backbreaker into a crucifix pin for two. He gets up and then drills Strong with a running lariat. Strong to the floor and Bate dives over the top rope and crashes into Strong. They gets back in the ring and O’Reilly goes on the apron, but Seven pulls him off. Strong takes out Seven but then Bate takes out Strong with a rolling kick to the back. He goes for the Tyler Driver once more and this time it connects for the win!

K-Tank’s Take: Fun stuff in the last few minutes between these two. When these guys kick it into that next gear, no one can touch them. It’s incredible how fast paced they work. This episode might be showing a lot of “on top at TV, losing at PPV”, with Kairi, EC3, & Bate looking strong heading into their matches.

That’s it for this week. Be sure to check out our official Takeover preview and then John and I will both have coverage of Takeover, though not necessarily live. Until next time, don’t do anything I wouldn’t do… but if you do, name it after me!