Welcome one and all to another installment of the NXT Spotlight here at TJRWrestling. As the calendar turns from July to August, we are getting closer to Takeover: Toronto. We don’t have a full card yet, but there more than a handful of hot rivalries going on right now. Who will make the final cut? Let’s see if anything transpires tonight! Also, as I write this, the news of Harley Race passing away just came out. Harley was one legend I never got to meet, but would’ve loved to. May he rest in peace. 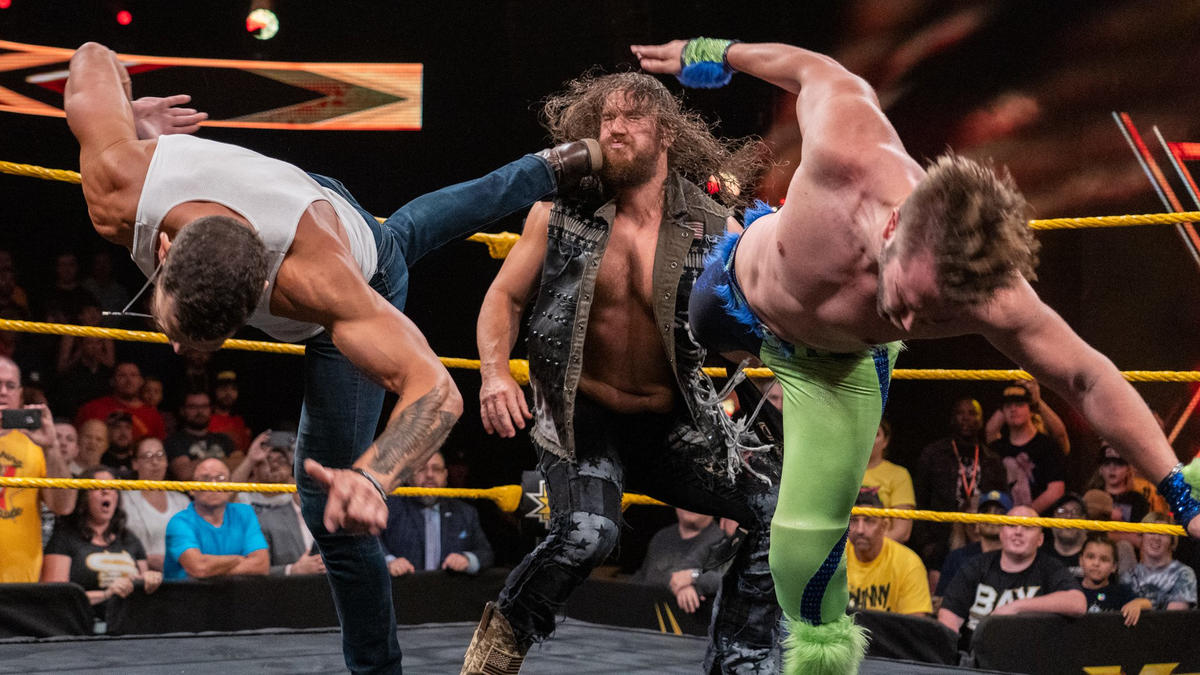 This match stems from a backstage altercation Breeze had with the Sons a couple weeks ago and the Sons saying this was a new NXT and didn’t need any of the previous era here. Ryker overpowers Breeze at first. Breeze fires back for a minute, stomping a mudhole in the corner, but Ryker recovers quickly and hits a urinagi and then proceeds to stomp a mudhole of his own. Big backbreaker by Ryker for a two count. Ryker toying with Breeze until Breeze catches him by surprise with a jumping knee strike. Ryker goes for a chokeslam but Breeze counters it into a victory roll pin and sneaks by with a 3 count!

Post match, Ryker immediately attacks Breeze and it quickly becomes a 3 on 1 assault. They feed Breeze for a powerbomb, but here comes Fandango! A slim and trim Fandango in a tank top and jeans comes out and disposes of the Sons before he and Breeze hit Steve Cutler with a double superkick. Breezango hug it out as the Sons can’t believe what just happened.

K-Tank’s Take: Fandango looks in the best shape of his career. But althought I think Breezango will be much better in NXT than they were on the main roster, I can’t help but be a little disappointed. Breeze solo is what I wanted to see. Hell, Fandango solo is something I want to see as well. Putting them back together just seems like the easy thing to do. Perhaps if Street Profits on their way out though, they felt they needed another top babyface tag team.

We go back to last week when Candice LaRae attacked Io Sharai during her match. We then go outside the arena where it looks like Candice is waiting on Io to show up. 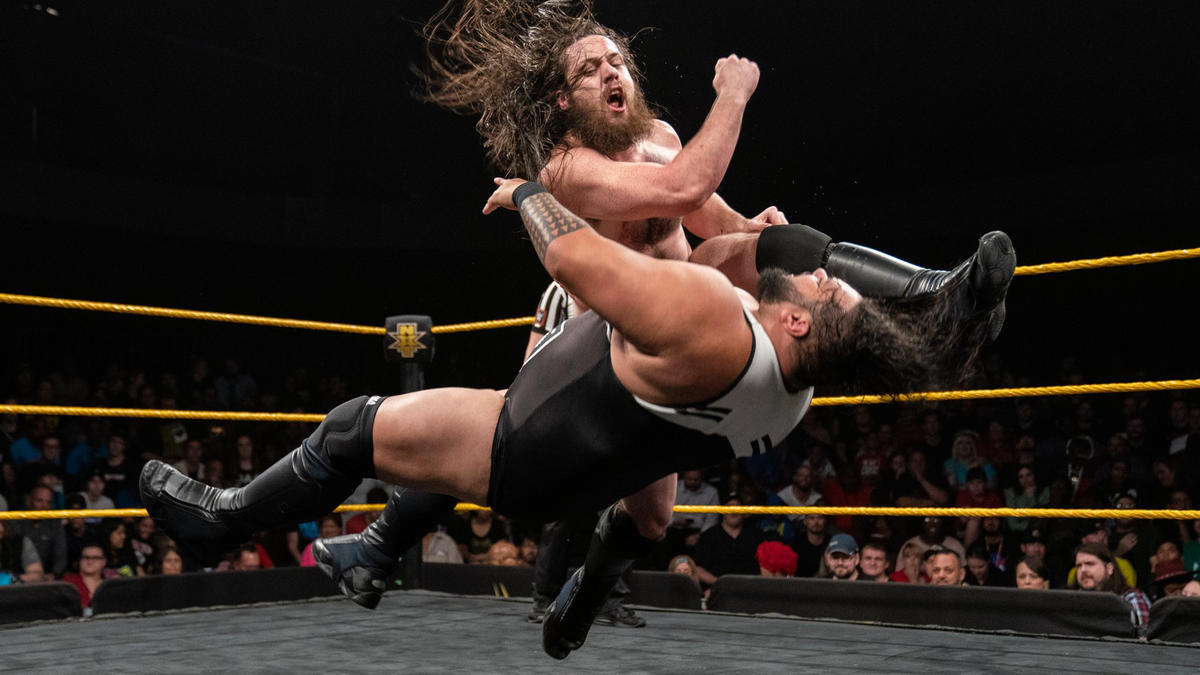 Reed with a go behind on Grimes and then just throws him across the ring. Grimes recovers but gets dropped by a Reed shoulder tackle for a one count. Grimes trys some forearms across Reed’s back but Reed drops him with a running back elbow. Reed clubbing away on Grimes in the corner. Grimes begs off to the floor, which ends up luring Reed into a basement dropkick once back in the ring. Grimes with a big running clothesline that gets Reed off his feet. Standing dropkick by Grimes but Reed doesn’t go back down. Reed with a snap powerslam to try and change the momentum. Avalanche splash in the corner followed by a Samoan Drop by Reed. Running senton splash gets a two count as Grimes gets his foot on the rope.

Grimes with a Superman forearm after stunning Reed in the ropes. Both men trading strong style attacks until Reed tries bouncing off the ropes and Grimes catches him with a standing Coup De Grace. That gets the three count.

K-Tank’s Take: This was not a good match at all. Perhaps the worst of the tournament. I’m not sure why they put Grimes in the finals. He doesn’t have a unique look or anything that really stood out over the others. In hindsight, I would’ve set up Angel Garza in the finals with Jordan Myles. I saw Myles vs. Grimes at a live event back in June and it was a really good match, but I dont know that it was worthy of Takeover and I think I would’ve done the tournament differently.

We get a recap of the Johnny Gargano/Adam Cole feud.

We catch up with Matt Riddle after a workout and he tells Killian Dain to meet him face to face and he’ll return the favor to Dain. It’s announced that those two will face off next week. 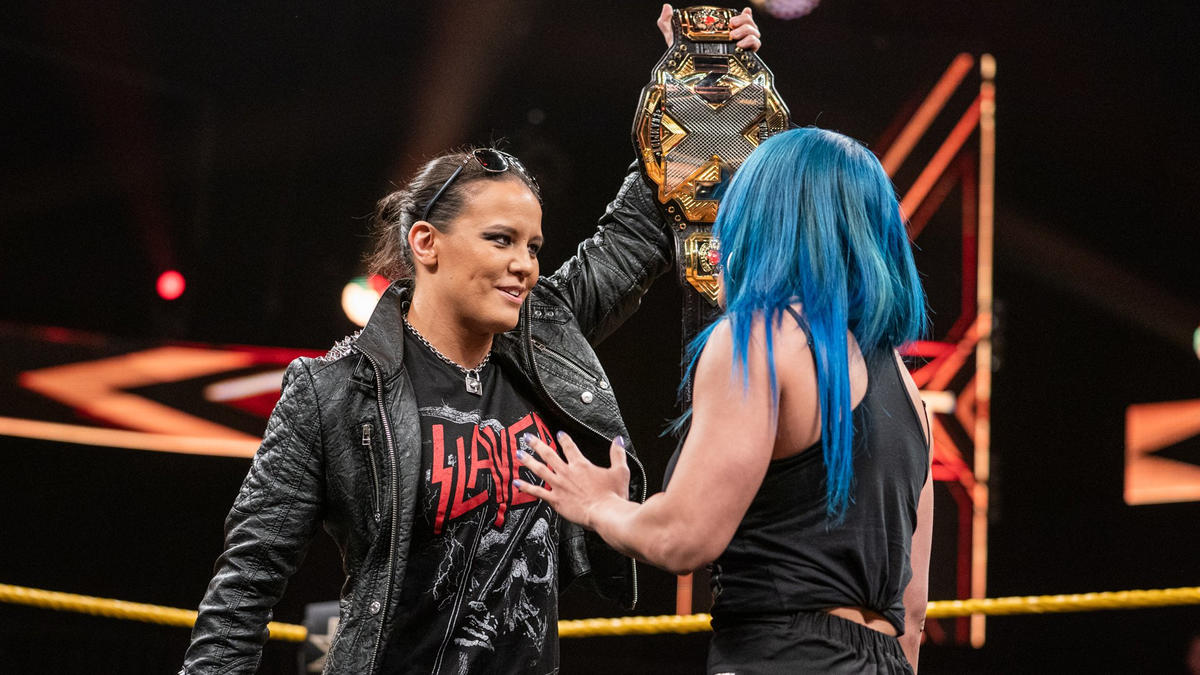 The NXT Women’s Champion, Shayna Baszler, comes out with a purpose and immediately calls out Mia Yim. She says she’s gotten Mia’s message. She’s attacked her friends from behind. This is not the streets. They are professionals here. That’s why she hasn’t gotten to Toronto yet but has already lost. This isn’t the streets, this is her biggest professional moment of her career. And under the bright lights and all the fans around, she’s putting Mia to sleep. Street rats don’t last long in her world.

Mia’s music hit and she accuses Shayna of being scared. Mia says she ain’t seen nothing as it pertains to Jessamyn and Marina. Mia says game recognizes game and Shayna looks real unrecognizable. She’s got nothing to lose and everything to gain. So this street rat is gonna bring a fight that Shayna can’t train for. Shayna says Mia isn’t special. Everyone is going to see that she’s nothing but street trash.

We go back to Candice LaRae outside the arena. William Regal shows up and tells her that unfortunately she won’t get what she wants tonight because Regal told Io not to come anywhere near the arena tonight. Candice says if she can’t get Io tonight then, she wants her at Takeover. Regal agrees to that match and tells Candice to go home now.

Next week will be a contract signing between Street Profits and Undisputed Era for the Tag Title Match at Takeover. 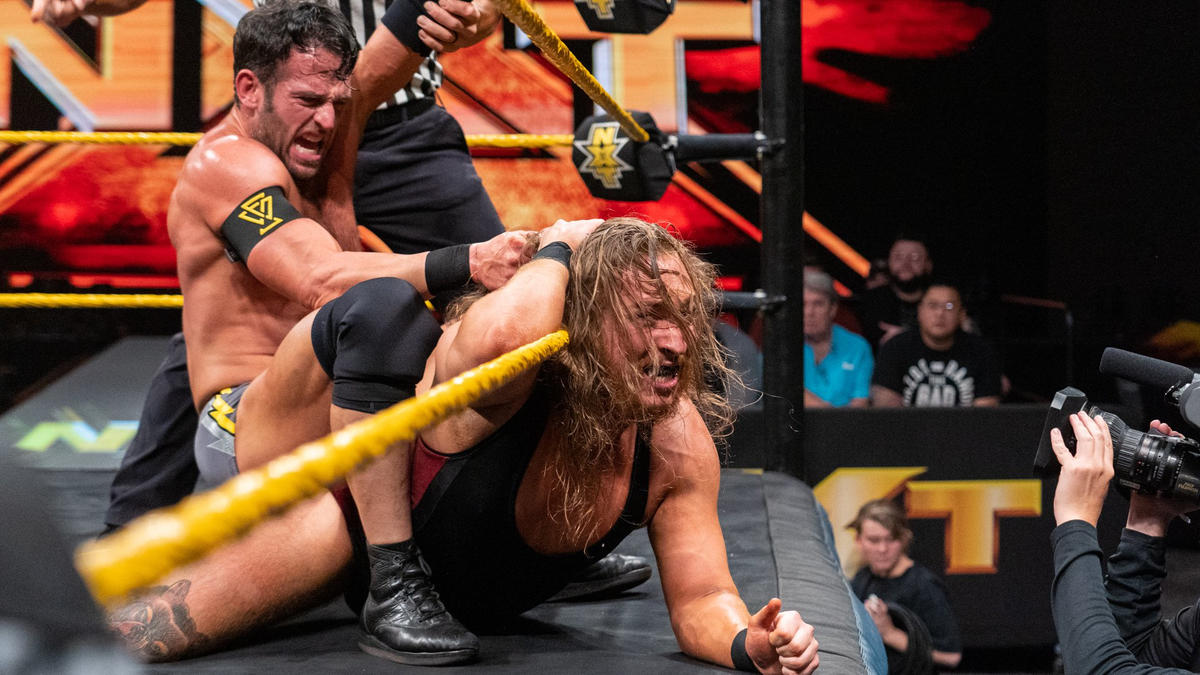 There’s about 18 minutes left in the show as the bell rings, so hopefully that means this is as full tilt as we would hope for. Any time I can write on a Pete Dunne match is a good time. Both men trying to start with a ground base attack before eventually getting back to their feet in a stalemate. Dunne tries to lock on an Octopus Hold but Roddy gets to the ropes. Strong with stiff kicks to Dunne. Both men trading hard chops in the corner before Roddy stomps away at Dunne. Dunne gets up and they have a nice back and forth before Dunne leapfrogs Strong and comes back with a lariat.

Dunne with the big stomp to the exposed elbow of Roddy’s. Dunne now manipulating that left arm and fingers of Strong before hitting a PK to the elbow. Dunne tries his ride up the turnbuckles but Roddy cuts him off and turns it into a backbreaker. Roddy with another standard backbreaker for a two count. Roddy pulling Dunne’s hair, using the ropes and the 5 count for leverage. Dunne firing back with some kicks to the thigh of Roddy, but Roddy comes back with a beautiful dropkick for another two count.

Both men trading haymakers. Dunne put up on the top rope as Roddy wants a Superplex. Dunne reverses it into a front suplex and then comes off with a front dropkick. Dunne this time scales the turnbuckles and flips over Strong to catch him with an enziguri. Dunne follows up with a release vertical suplex and then a PK for a two count. Dunne avoids a half and half suplex and then lands on his feet when Roddy goes for a German suplex. He counters with a sitout powerbomb for a near fall.

Roddy rolls to the floor and Dunne tries a Golden Triangle moonsault. Roddy cuts him off and then ends up using the apron as a source for a backbreaker. He gets a two count out of it. Roddy with some huge strikes followed up by another backbreaker and then his reverse Olympic Slam which gets a near fall. Roddy with a series of running forearms. Both men trade enziguris and then Roddy with an Olympic Slam. Roddy holds on and tries another move, but Dunne turns it into a tornado DDT.

Dunne drops Roddy with a flurry of strikes and then tries to go to the top. Roddy cuts him off again. Dune stomping away at Roddy from the top rope. Roddy with a kick to Dunne’s knee. Roddy sets up Dunne for a top rope Olympic Slam but Dunne gets out of it and then I don’t know what Dunne was trying for, perhaps a sunset flip powerbomb, but both men just end up falling on top of each other in an ugly fall. Roddy escapes the X Plex and hits a jumping knee strike. Double underhook powerbomb for a two count and then Roddy goes to the Strong Hold. Dunne goes after the fingers of Roddy to get out and then locks on a Triangle. He rolls over on top of Roddy and has the fingers isolated. He starts snapping fingers and Roddy taps out immediately.

Post match, Velveteen Dream tries sneaking behind Dunne, but Dunne catches him. Roddy yells that it’s his title. Dream starts to pose but Dunne grabs his hand and snaps his fingers. X-Plex on Dream and Dunne stands talls as our show comes to an end.

K-Tank’s Take: As physical and hard hitting a match as you’d expect. Roddy really shined in my opinion, both with his physicality and his selling of the left arm that Dunne continually worked over. I loved the finish as it came out of nowhere and wasn’t just a simple finishing move for the win. It spoke to the story of how punishing Dunne had been all match long and Roddy just had to tap out to save himself for the title match at Takeover.

That’s it for this week. Next week will be the last show before Takeover, so we’ll have the official preview going up as well. Until next time, don’t do anything I wouldn’t do, but if you do… name it after me!