Welcome one and all to a huge installment of the NXT Spotlight here at TJRWrestling. A match that has been weeks in the making, Tommaso Ciampa challenging for the NXT Title against the champion, Aleister Black. This could be history in the making as the first NXT Title change on NXT TV. Whatever happens, it should be a spectacular match. Let’s see how that and the rest of the show goes down! 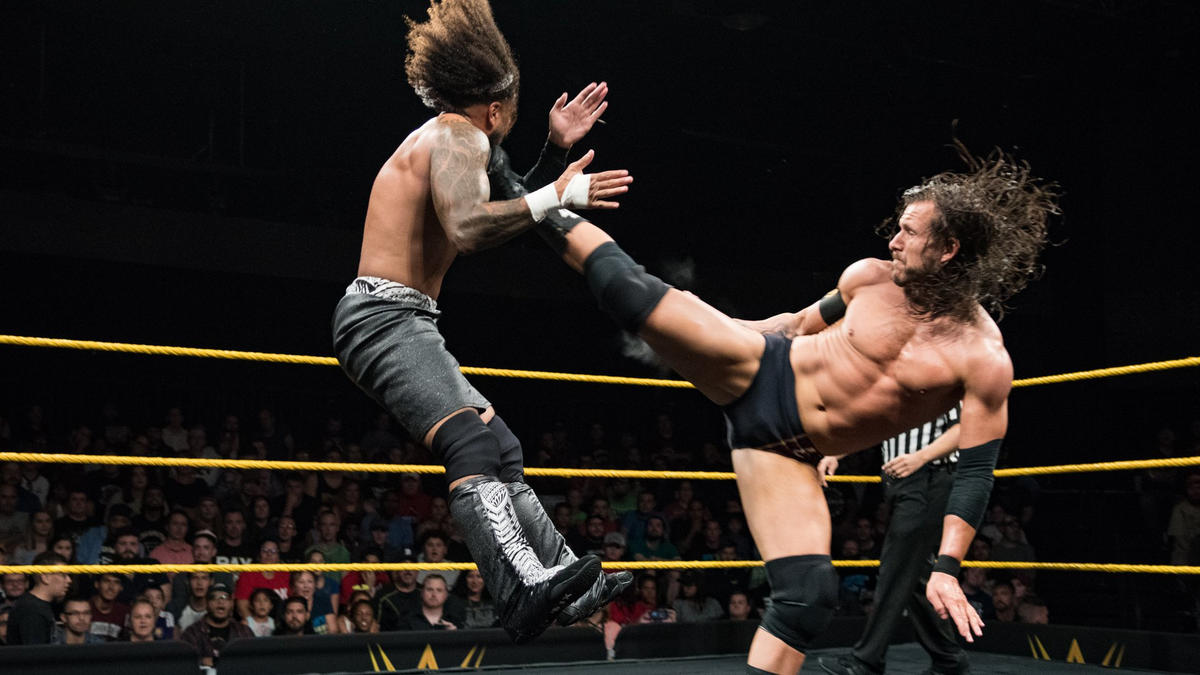 Is Cole the coolest guy in all of pro wrestling? I sometimes think he is. It’s a short list for candidates, right? Cole pie faces Maluta to start with after a tie-up. Cole with a go behind takedown and then paintbrushes the back of Maluta’s head. Maluta gets up and tries a couple quick pins to steal a win, doesn’t work but lands a leaping neckbreaker. He follows that up with a big boot in the corner, but as he goes to the second rope, Cole trips him up and sends him crashing to the mat. Cole beats on Maluta for a bit and then put him on the second rope, but Maluta headbutts him down to the mat. Maluta tries jumping off but gets caught flush in the face with a superkick. It was picture perfect. He then lands his Shining Wizard to the back of the head to get the win.

Cole gets a mic after the match and says he’s the most buzzworthy wrestler on any brand. He defends his title all over the world. Tonight he faced a young upstart who wanted an opportunity,and Cole was the one to give him that opportunity. Cole was about to say if anyone wanted an opportunity, but Ricochet’s music cuts him off and the One and Only comes out. He tells Cole that he owes him an apology for not running from that challenge of Maluta. He continues to take some funny digs at Cole and says he hasn’t shocked the system, he’s shocked everyone by being a coward. Cole can prove how good he is though by having a match for the NXT North American Title at Takeover: Brooklyn against Ricochet. Unless he was right about Cole… Bay Bay. Cole says he is so good and that’s why he won’t diminish himself by taking Ricochet on in Brooklyn. With that, Cole walks off. Ricochet says that’s ok and Cole can leave… just like the coward he thought Cole was. Cole makes like he’s going to charge the ring but Ricochet fakes a dive and Cole backs off. Cole says he doesn’t need to prove anything to Ricochet. O’Reilly and Strong come to back Cole up and it looks like it might be 3 on 1 but then War Raiders music hits and they end up running off the Era. They run towards the announcer’s area but now it’s Moustache Mountain that come up behind the champs and they get a couple shots in before Era runs off anywhere they can to safety.

K-Tank’s Take: Ricochet vs. Adam Cole at a Takeover: YES PLEASE! Talk about a match that will steal the weekend. The North American Title should be showcased more for sure, so this is a great rivalry to go with.

We get a recap of the issues between EC3 and Velveteen Dream. It’s announced that next week EC3 will have to take on Kona Reeves first on next week’s show. 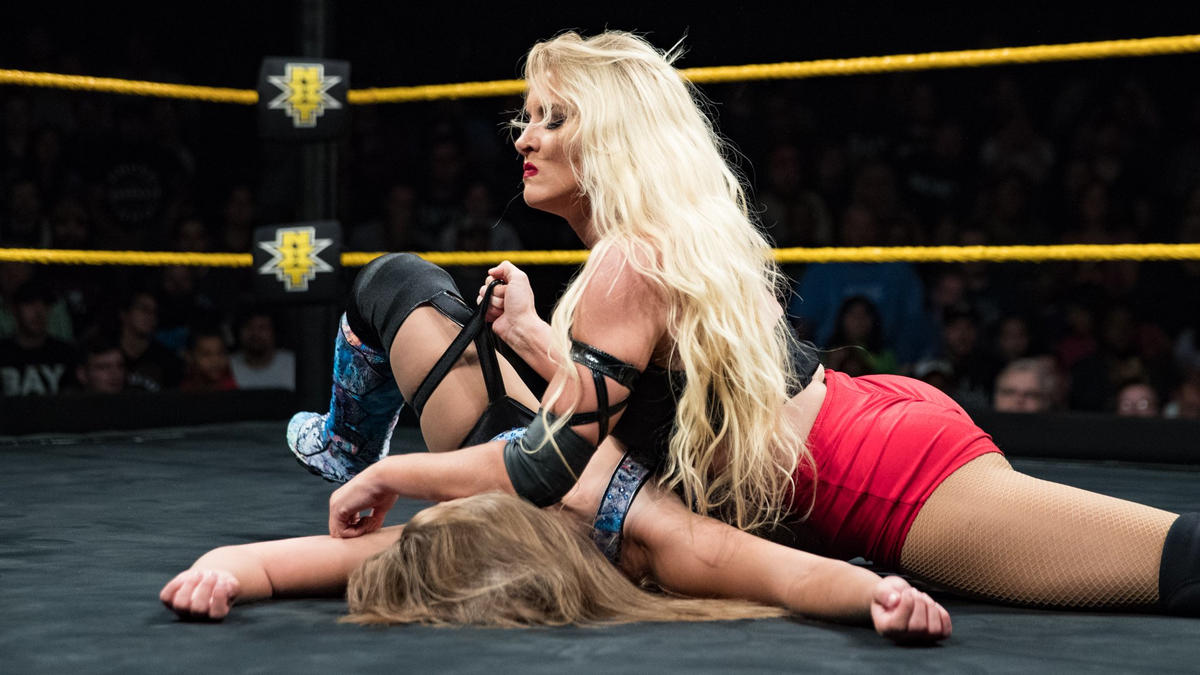 K-Tank’s Take: Evans’ offense has been really good as of late. I love her aggressiveness. She has a look and a character that will translate well on a bigger stage as well. The women’s division is looking really strong again.

We now go backstage to Bianca Belair, who is asked about her recovery from injury and why she missed the fatal 4-way match last week. She says she doesn’t need to explain herself to anyone. She’s undefeated. Why should she have to work three times as hard? Everyone’s gonna learn when she gets back, and she’s gonna get what she deserves.

We find Shayna Baszler again and it’s Candice LaRae who’s confronting her now. Candice wants a fight but Serena Deeb is back with her and tells her now is not the time. Candice is convinced to walk off but she says she’s going to find the time. 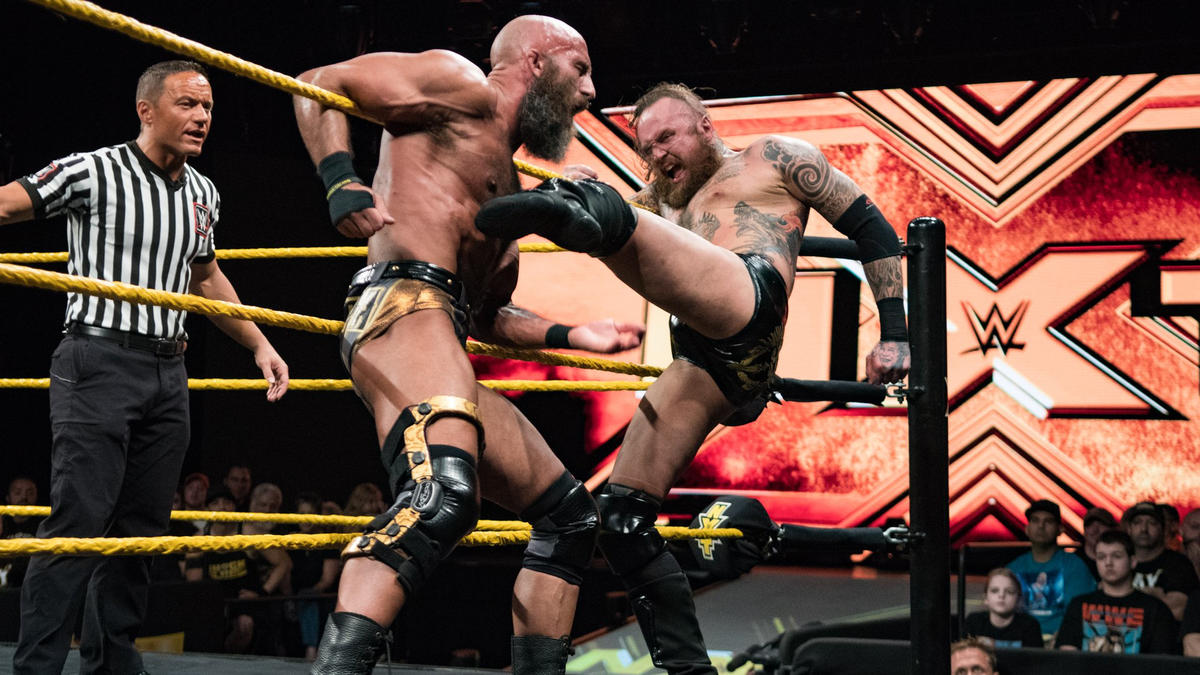 Right at 25 minutes left in the show after big match introductions, so they will get plenty of time it would appear. That’s good news. Ciampa looks collected and Black is clearly angered. Ciampa starts working on the left arm. Some chain wrestling after that. Black has a front face lock but Ciampa gets out and turns it to a side headlock. Black shoots him off and Ciampa lands a shoulder tackle. Ciampa comes off the opposite ropes and goes for an Oklahoma Roll, which Black kicks out of. We have a reset and both men exchange holds again. Black avoids another shoulder tackle and now he’s the one trying a quick pin but Ciampa kicks out. Ciampa gets up and walks into an arm drag takedown. Ciampa pie faces Black and then ducks a kick from Black. Ciampa goes to the outside and tries to bait Black, but it doesn’t work. Ciampa with a roundhouse to the chest on the floor. Ciampa goes back on the attack though when both men get back in the ring. Black sidesteps Ciampa in the corner and lands another roundhouse to the chest. A third one and Ciampa goes to the apron, where Black hits a big boot, sending Ciampa to the floor. Black with his fakeout lionsault and mocks the waving bye motion that Ciampa is known for now. Ciampa gets back in the ring but can’t avoid any of Black’s attacks until Black goes for the Lionsault again and Ciampa ends up being able to toss him over the tope rope. Ciampa immediately attacks Black on the floor and sends him hard into the steel steps. Back in the ring and Ciampa with a low dropkick to the side of Black’s face and then goes for a pin but Black kicks out. Backbreaker by Ciampa as he starts to wear down the champ. Ciampa with an abdominal stretch but grabs the top rope for leverage and the ref makes him break it. Ciampa tries a suplex but Black blocks it. Black tries a German suplex but Black sells his back. Ciampa instead now locks on a Texas Cloverleaf. That’s a submission that should be used more. Black is able to get the ropes.

Both men end up on the apron and start trading blows. Black with a series of kicks and ends up getting Ciampa back in the ring. Black is going to the top rope but Ciampa cuts him off. Ciampa on the second rope and tries an Irish Curse off of there, but Black slides out and kicks Ciampa in the knee. Both men attempt pins to steal the win but neither work and then both end up running into each other and cracking heads. Black starts to fire up as they both get up and has the advantage. Multiple strikes by the champ and then a big kick to the head, followed by a standing lionsault. Ciampa is able to kick out. Black gets dumped to the apron and Ciampa tries his hanging DDT but Black escapes and goes back to the kicks. Big running knee to the side of Ciampa’s face but again Ciampa kicks out. Ciampa cowers to the corner and wants a timeout but Black comes in with some hard kicks anyways. Ciampa goes to the apron and Black goes to follow, but Ciampa trips him up and Black lands spine first on the apron. Ciampa throws him back in the ring, goes to the second rope and lands a nasty jumping DDT. Black still somehow kicks out. Ciampa setting up for his running knee in the corner but Black blocks it. Ciampa ducks a kick and drills Black with a lariat but Black still kicks out. Ciampa pulls his kneepad down and goess off the ropes, but Black catches him instead with his own knee strike to the face. Ciampa kicks out again. Black picks up Ciampa with his boot and goes for Black Mass but Ciampa ducks, rolls up Black and grabs the tights… Black kicks out! Black comes off the second rope with diving knees and then a bridging German suplex but Ciampa kicks out still and rolls to the floor. Great sequences there. Black with the Golden Triangle moonsault to the floor but Ciampa moves and Ciampa shoves Black into a cameraman. The ref is distracted checking on the cameraman, so Ciampa goes under the ring and grabs his crutch, slams it into Black’s throat, goes for a pin but Black is still able to kick out. Ciampa goes for his DDT in the ropes again but Black dumps him to the floor. Black with a huge somersault dive over the top rope! Black gets Ciampa back in the ring but Ciampa comes right back and this time plants Black with his hanging DDT… great near fall! The crowd is going nuts and rightfully so. Ciampa back to the outside and is working to pull the protective mats up to expose the concrete. He drags Black and tries to hit his DDT on the concrete but the ref stops it from happening. Both men are back in the ring and Black ends up shoving Ciampa into the ref, who takes bump off the apron onto the concrete below. Ciampa turns around and is hit with Black Mass but there’s no ref! The crowd counts to 10 but this match continues. Ciampa basically fish hooks Black’s eye after Black checks on the ref. Ciampa gets the NXT title and brings it in the ring, but here comes Johnny Gargano! Gargano superkicks Ciampa and grabs the belt, but Ciampa is still holding on to it and and Gargano ends up turning around and hitting Black with it as he yanks it away from Ciampa! Gargano can’t believe it & Ciampa throws Gargano out of the ring and hooks Black in the sitout Pedigree (Angel Wings from Christopher Daniels) and 1…2…3! New champion!! The match went 22 minutes.

The crowd has come unhinged for that finish as the boos rain down. Of course that’s all you hear as there’s no music for Ciampa. Ciampa makes the ref put the belt around his waist and hold his hand in victory. Ciampa reminds everyone all it took was one moment. That ends our show with no replays.

K-Tank’s Take: Well there you have it. If you were looking for spoilers on our site last week, you knew this was coming. Those last 10 minutes or so were really something special. I haven’t talked to John, but I would probably give this 3.75 stars (Note from John: I’d go 4 stars for this loved it!). This will clearly lead to a triple threat match at Brooklyn, to which I would expect Black to move on to the main roster after that and then that leaves Ciampa and Gargano for the huge blowoff in November at Takeover: War Games. This was very well done and the crowd was as hot for this finish as anything I’ve seen in Full Sail. 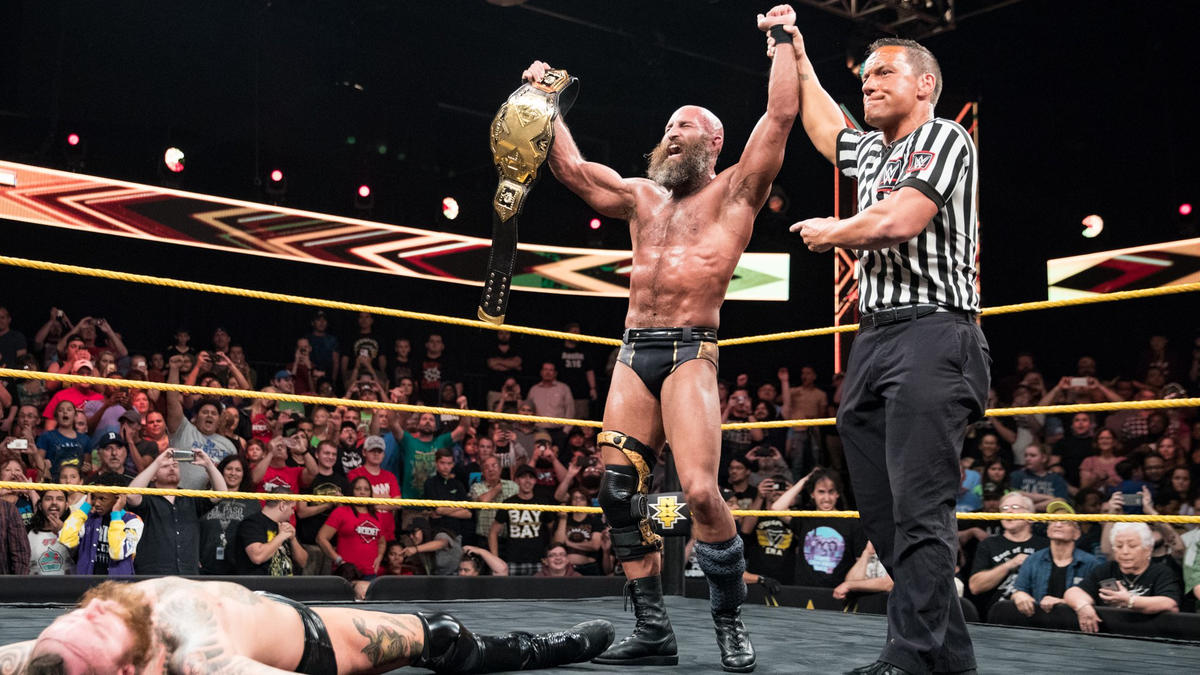 There was nothing announced for next week, but I’ll be here for whatever they bring us! Until next time, don’t do anything I wouldn’t do, but if you do… name it after me!