Welcome one and all to another installment of the NXT Spotlight here at TJRWrestling. Things are red hot in the brand and we’ve always got a lot going on. Tonight we will have our first match for Takeover: Brooklyn set as we have a #1 Contender’s Match set up to see who will challenge Shayna Baszler for the NXT Women’s Title. This was supposed to be a Fatal 4 Way, but Bianca Belair was pulled due to injury. No word on what that injury is though and if she’ll be out for any amount of time after this. Let’s get to the action. 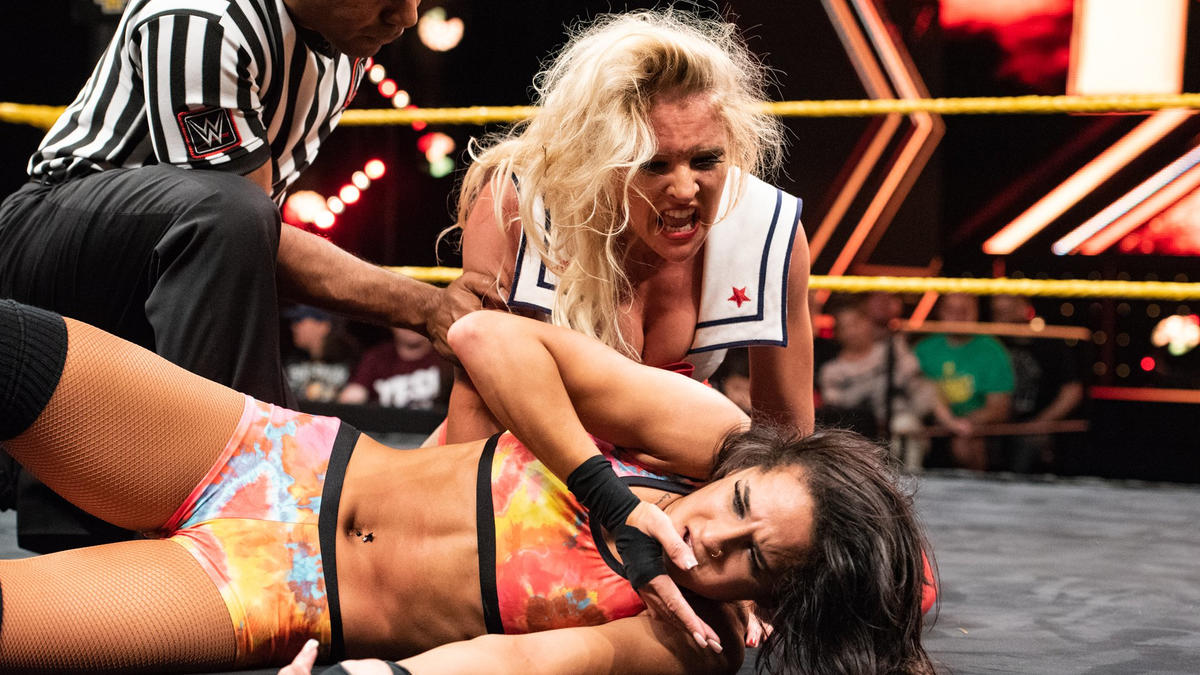 Lacey mocks the kicking actions of Dakota to start, and Dakota immediately makes Lacey look stupid for doing it. A couple early pinning predictaments for Dakota but Lacey kicks out. After a couple kicks from Dakota, she sets up Lacey for the running face wash, but Lacey moves and Dakota is caught in the top rope. Lacey proceeds to use the tag rope to hogtie Dakota to the top rope and then comes in with her push up bronco buster from a unique position. Lacey now stomping away at Dakota. Big knee to the small of the back. Dakota sneaks in a rollup pin but Lacey kicks out and goes right back to work. She gets a single leg takedown and then punches Dakota right in the stomach. Lacey is working all areas of the body. Lacey locks on a version of the STF and grinds down Dakota. Lacey lets that go, only to switch to a bow and arrow with the knee right in Dakota’s spine. Lacey almost goes into the splits and digs her foot into the back of Dakota as she pulls back even further on the arm. Lacey is doing everything she can to grind down and work over Dakota. She goes over the top rope with a slingshot elbow drop but Dakota still kicks out. Lacey to the second rope now and goes for a moonsault, but Dakota moves out of the way. Dakota with a series of fast kicks to the face of Lacey as she tries to fire up. The crowd finally gets into the match as Dakota nails two running face wash kicks. She makes it a trio as Lacey is in a seated position in the corner. Dakota pulls her out and goes for a pin but Lacey kicks out. Lacey ends up catching Dakota with a pump handle slam to get some separation again. Dakota comes back with a kick but Lacey trips Dakota down. Dakota gets back up but she turns right into the right hand of Lacey and that gets the win.

There was a lot of post match trash talk from Lacey to a prone Dakota.

K-Tank’s Take: Lacey randomly got her first shirt on WWEShop, so I don’t know if that combined with this win, is a sign of a push for her. Her offense was strong in this match, no wasted moves while she was working over Dakota, but the problem was just the crowd wasn’t into the match at all. Maybe after a win like this, they’ll take her more seriously now.

We go to Ricochet backstage. He says it’s no secret that he doesn’t like the Undisputed Morons who are tag champions, but at least he knows they’ll defend the titles. Unlike Adam Cole, who has barely defended his North American Title since he won it. A couple months ago, he was this close to becoming that champion until Cole found a way to steal. Cole also found a way to steal a win over Ricochet a couple weeks ago. He’s hiding behind the title and everyone knows it. He’s coming to be the next North American Champion.

We catch up with The Street Profits on the basketball courts. They say just because you’re on a cold streak, doesn’t mean you stop shooting.

We then go to EC3 backstage, who is asked about interrupting Velveteen Dream recently on TV. He says it was a nonfriendly reminder that he remembers Dream’s betrayal at Royal Albert Hall. A guy interrupts and asks for a selfie, which he grants and tells the guy to tag him on Instagram. Another guy complements his suit and EC3 pulls out his new t-shirt and gives it to him. He makes a funny comment of “You can have it, Idon’tt need your money. I’m rich.” EC3 ends up walking into Kona Reeves, who says that everything EC3 isn’t the finest. EC3 steps up to him and challenges him to fight but Kona wants nothing to do with it. EC3 says it’s because he knows he’ll get the top 1% beating of his life and walks off. Kona then says that he’ll fight EC3 but they could’ve been the finest of friends.

We then get a video package for next week’s NXT Title match between Aleister Black and Tomasso Ciampa. If you’re so inclined to know how that plays out since NXT had their latest tapings this week, we have all that info on the TJR homepage. WWE spoiled it, so we might as well do it too. 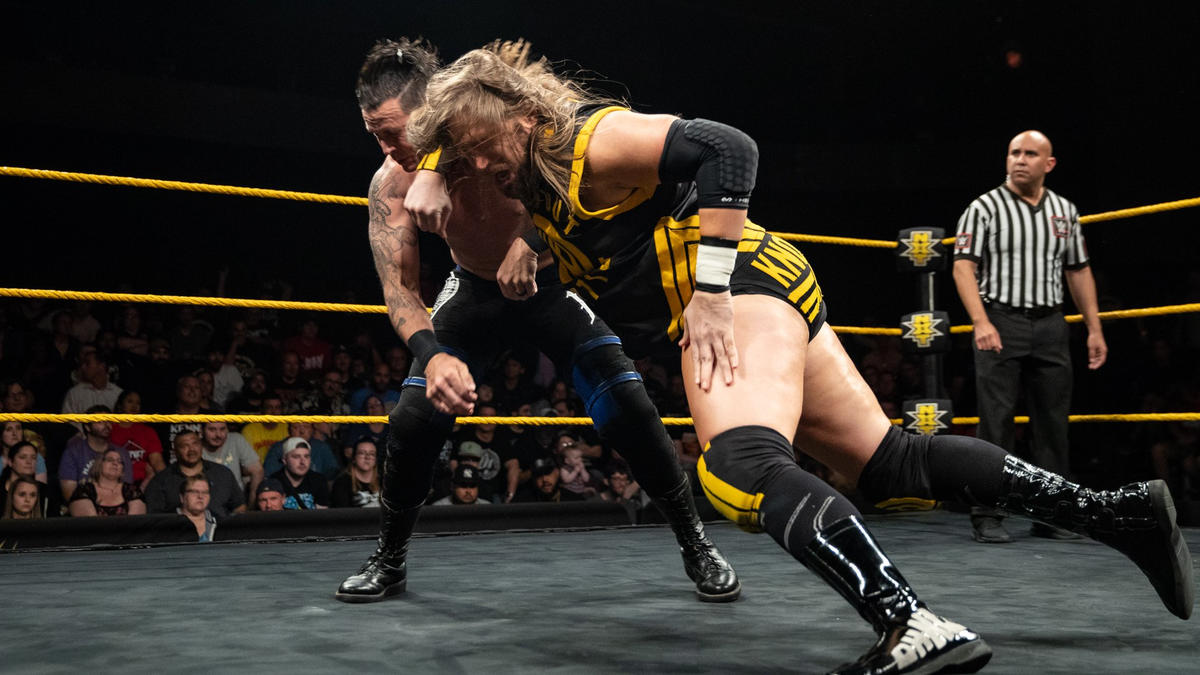 Ramirez with a go-behind, but Ohno reverses it and slams him down face first. Ohno comes at Ramirez with his discus knockout elbow shot and that’s it.

K-Tank’s Take: Ohno had a much more serious demeanor in this brief action. Maybe a heel turn coming? He needs something. A squash match like this does nothing for him since everyone is conditioned to know he won’t win a big match.

Now we’re with Undisputed Era backstage, who says there was never any doubt that they’d get thier tag titles back. Cole calls Ricochet a joke and says he doesn’t speak loser as it pertains to Ricochet saying he’s been close to becoming champion. He advises Ricochet to not get too close before he gets hurt.

We get a video package learning the history of War Raiders. It was a well done production, as is the norm for NXT. It talks about Rowe’s major motorcycle accident in 2014, which he was lucky to survive. They came across strong in their interview portions of the package. I’m sure Moustache Mountain will get a rematch against Undisputed Era, but this package would lead me to believe the War Raiders are soon to get a big push & probably gun for the titles.

Now we’re backstage with The Velveteen Dream. He snaps his fingers and everything goes black. He then summons his “experience” s the lights go purple and smoke is around him. He says he can still hear the people buzzing about what the next experience is going to be. War Games, everyone said his name. Philadelphia, the Dream had a knockout performance. New Orleans, the Dream rose to heights no one could imagine. Chicago, another match of the year for Dream. For Takeover: Brooklyn, everything will still shine the brightest on the Dream. I can’t do that production justice. That was so fantastic and just perfect for Dream. 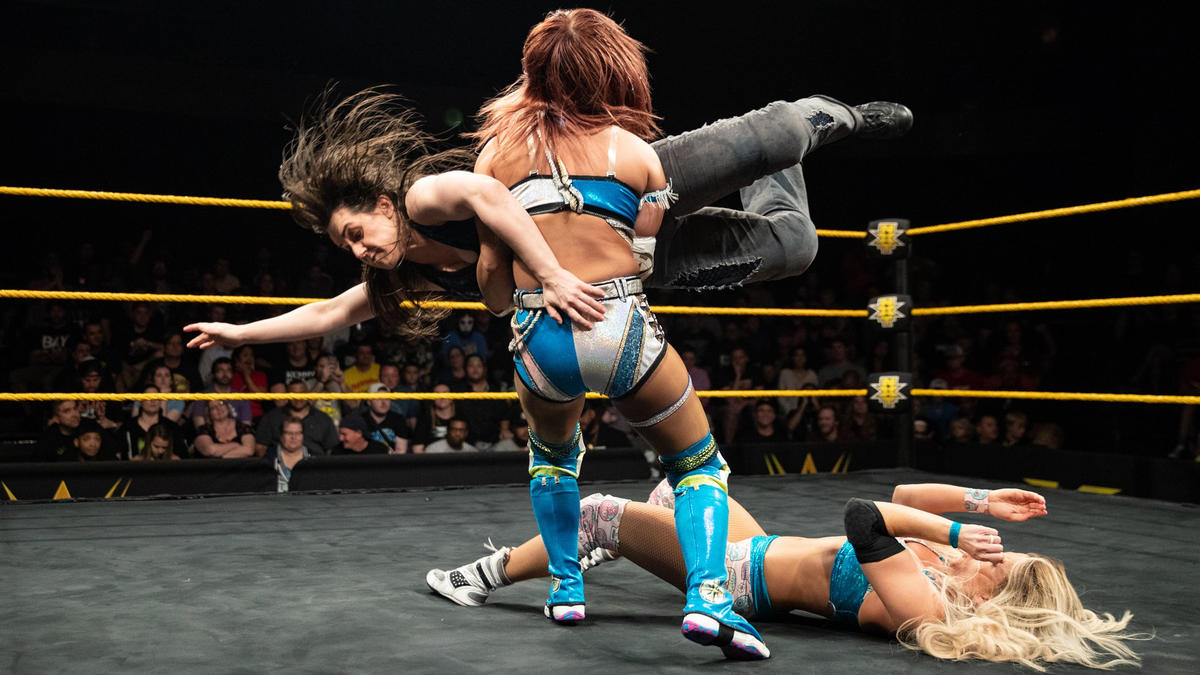 Before the match can get underway, the champ herself, Shayna Baszler makes her way to the announce table to get a view of her future challenger. Nikki is waving at Shayna, which made me laugh. About 13 minutes left in the show as the bell rings. All three women try quick roll up pins to start. Candice ends up getting knocked to the floor by Nikki. Kairi with multiple chops in the corner to Nikki. Nikki avoids the running forearm smash in the corner though. Candice ends up diving through the ropes and taking out Nikki. She tries it again but Nikki meets her this time with a forearm. Nikki traps Candice in the ring skirt and beats Candice repeatedly in the back. And then hugs and smiles. Nikki is so great. The crowd likes all three obviously, but they’re strongest for Nikki. Nikki locks on the Rings of Saturn and then rolls it over into a crucifix pin, which Candice kicks out. Nikki gets Candice up in the tree of woe in the corner and then stomps away. Nikki turns around and walks into a spear from Kairi. Kairi goes to the top turnbuckle above Candice and nails a double foot stomp while Candice was still hung up. Kairi with a pin but Candice kicks out. Kairi hooks The Anchor submission she debuted last week, but Nikki breaks it up. Nikki with a sleeper hold and Candice breaks that up with a dropkick. Candice chopping away at Nikki and then lands a running hip strike. She goes straight to the apron and lands a senton splash on Kairi on the floor. Nikki comes out and grabs Candice on the ramp and lands a reverse DDT. Kairi now comes off the apron and drills Nikki with a forearm smash and all three women are down. Kairi up first and throws Nikki in the ring. She tries to go to the top rope and Nikki cuts her off. Nikki trying for a superplex and it of course leads to the tower of doom as Candice powerbombs Nikki down at the same time. All three women striking each other while struggling to get to their knees. Nikki clotheslines Kairi, Candice enziguris Nikki. Candice goes after Kairi, but Kairi drops her with a back fist. Candice comes right back and ends up hitting a combination DDT/Flatliner on both her opponents. Candice with a lionsault onto Kairi and goes for the pin but Nikki breaks it up. Nikki drags Candice out on the apron and lands her swinging neckbreaker off the apron onto the floor. Nikki goes after Kairi and hits a back suplex. She hits two more, folding Kairi in half on both of them. Nikki wants her fisherman’s neckbreaker but looks back at Shayna and then ends up putting Kairi on the top rope. Candice crawls back in and tries to stop Nikki and ends up catching her with a small package but Nikki kicks out. Candice lands the Killswitch on Nikki and then follows with another Lionsault. She goes for the pin but Kairi off the top with her InSane elbow drop. Nikki rolls to the floor, Kairi covers Candice and Kairi Sane is the new #1 Contender!

Kairi and Shayna look at each other from across the arena as our show comes to an end.

K-Tank’s Take: Don’t sleep on this match, you should go watch it. It was action packed and never slowed down. Kudos to all three women. I’m obviously sad that Nikki didn’t win, but hopefully they can go back to her after Brooklyn. Kairi has been getting a renewed push now that the injury bug has left her, but I don’t know that I’m ready to call for a title change at Brooklyn just yet.

This week was obviously a little light on the in-ring action, but next week is a HUGE main event for the NXT Title. So until next time, don’t do anything I wouldn’t do… but if you do, name it after me!