Welcome one and all to another installment of the NXT Spotlight here at TJRWrestling. We’re gearing up for our Takeover event in Toronto next month, and although no matches have been made official yet, the signs are there for certain matches to be signed. Will we learn anything tonight? Let’s find out! 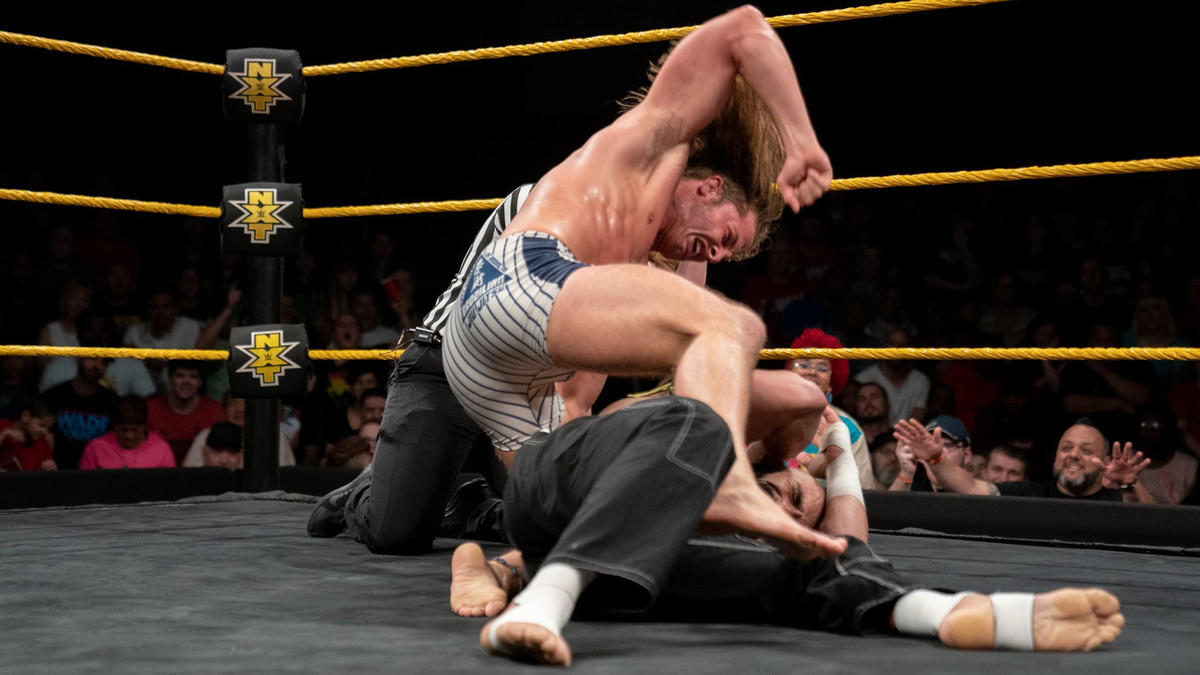 Ruas went by a different name previously, but it escapes me what it is. He’s a Brazilian ju-jitsu expert. Both men working early on the ground, Mauro called it, “great scrambling by both men.” Ruas tries a standing triangle that Riddle fights off so Ruas just bodyslams him instead. Both men trade armbar attempts. Both men facing off like a Street Fighter fight. Riddle taken to the mat but gets the ropes. Both men trading standing kicks. Ruas with another takedown. Riddle escapes the mount. Back to trading kicks. Another takedown on Riddle and hammerfists, but Riddle gets up and then lays out Ruas with a heel kick. Riddle with ground and pound on the mount position and the ref calls for the bell as she declares it a TKO victory for Riddle.

Post match, Riddle is celebrating and a man in a zipped up hoodie attacked Riddle from behind. He unzips the hood and it’s Killian Dain! Dain all over Riddle as he throws him out of the ring. Dain is relentless and then hits a senton splash on the floor. Dain takes Riddle up to the top of the ramp and then does another senton splash, but this one sends Riddle all the way through the stage. That looked gnarly! Refs finally get Dain to leave the area as they check on Riddle.

K-Tank’s Take: The match was interesting as it was fought basically as an MMA fight. I don’t mind doing something that makes Riddle look unique and it worked for the most part. Obviously, the story here is Dain returning and returning in what looks to be a high profile way. Riddle seemed to be poised for an NXT Championship shot but they pivoted and went here. It makes Dain’s return more meaningful, that’s for sure. The dive through the stage was impressive and got a good reaction.

It’s time for another Street Talk with the NXT Tag Champions, The Street Profits. They say there are some individuals that don’t believe they’re actually the tag champs. They try to run the place. Kyle O’Reilly and Bobby Fish don’t run this place. Whenever they want the smoke, come find the champs. Because they’ll still be NXT Tag Champs and THAT is undisputed.

We go to footage from a live event last weekend where Mia Yim takes out Marina Shafir in the parking lot and beating her up with her own rental car. 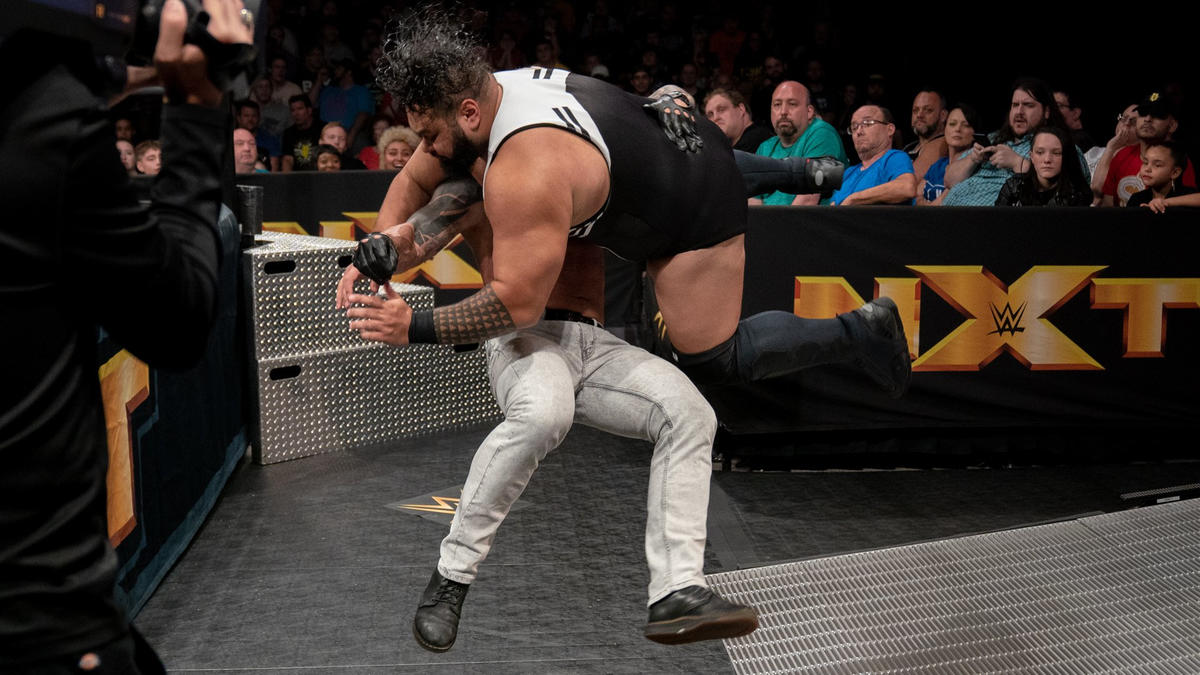 Lumis is the former Samuel Shaw from Impact Wrestling and Reed is Jonah Rock from the indies and international fame. Lumis with a very creepy and uncomfortable type entrance. Very criminal like. Reed with just a simple babyface entrance. All the announcers putting over how creepy Lumis comes across. Reed with a shoulder tackle but Lumis escapes a bodyslam and hits a back elbow that sends Reed to the floor. Lumis tries a nice somersault dive over the top rope but Reed moves and yet Lumis is able to land on his feet.

Lumis misses a clothesline and Reed with a standing cross body splash on the floor. Lumis with a thrust to the throat when they get in the ring, and now pounding down on Reed. Lumis with a neck vise and then randomly licks Reed in the face and smiles about it. Reed gets up and hits a big powerslam. Reed making his comeback and drops Lumis with a back body drop. Running avalanche by Reed, followed up by a senton splash. Lumis gets out of a back suplex and delivers one of his own to Reed. Big leg drop for a two count.

Lumis to the top rope and goes for a swanton, but Reed moves. Reed with a spike back suplex on Lumis and now it’s his turn to the top. Big Superfly splash by Reed and that gets the win.

It will be Reed vs. Grimes and Garza vs. Myles in the semi-finals.

K-Tank’s Take: Not sure what to make of Lumis. It’s a hard character to get over with no introduction. It just comes off as weird with no explanation or vignette to show who he is. Both men showed flashes and obviously, Reed is not a small man to be coming off the top rope like that.

We go to a Tyler Breeze photo shoot, who is asked about bouncing back from his loss against Roderick Strong. He says NXT is all about having backup now. So he has two options, adapt or… then The Forgotten Sons show up. They say Breeze isn’t a real man and the new NXT is about real men. Breeze says he’s a real man, check out his beard. He points out Jaxson Ryker and asks if he used to be Buddy Murphy. That was funny. The Sons try to intimidate Breeze but he says he’s seen everything and walks away.

We go back to last week where we see the reveal of the new side of Io Sharai. Next week she will take on Kacy Catanzaro. 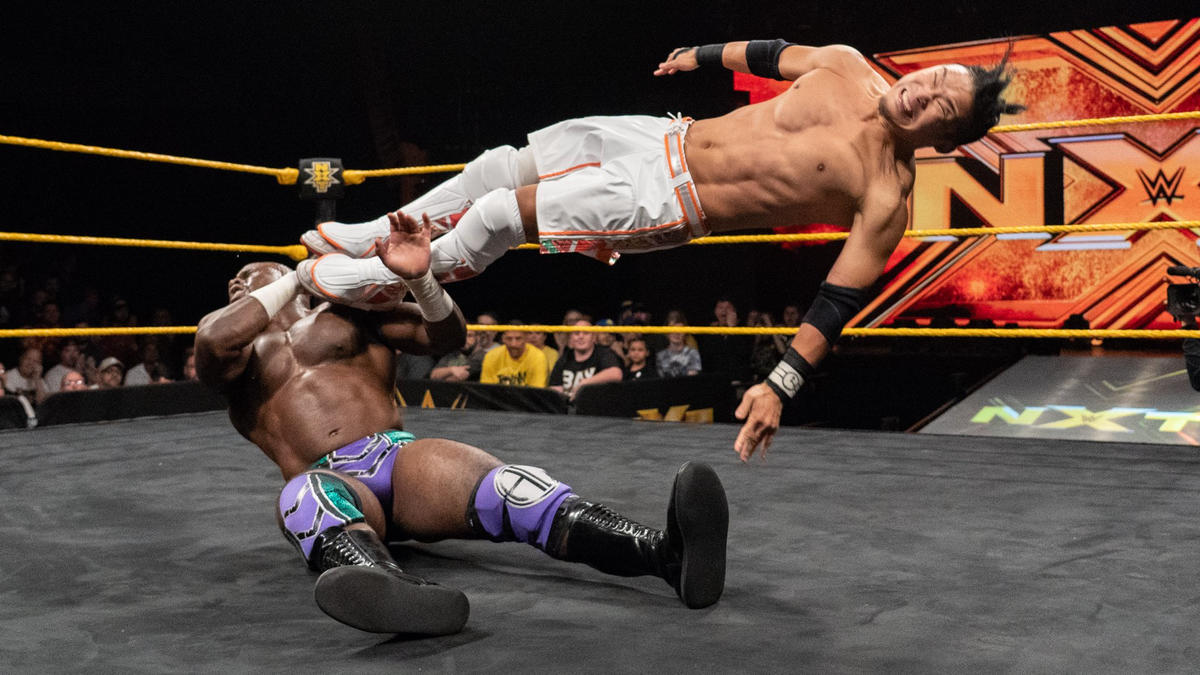 Both men testing each other out to start. Crews with a go behind takedown. KUSHIDA shows off his ground attack on Crews before they come to a stalemate. Crews with multiple drop downs and leapfrogs, showing off his athleticism and then hits a picture-perfect dropkick. Corner clothesline by Crews. KUSHIDA comes back with a handspring kick that kicks Crews to the floor. They get back in the ring and Crews catches KUSHIDA with a pop-up gutbuster. Crews follows up with a standing delayed vertical suplex for a two count.

Deadlift German suplex by Crews and then he hangs on and hits a trio, the third one flipping KUSHIDA head over heels. Crews with a standing shooting star press for a near fall. Crews tries a gorilla press but the arms give way. KUSHIDA with a flatliner into the turnbuckles. KUSHIDA with a springboard hurricanrana but Crews rolls through into a sunset flip pin and gets a two count. Both men knock each other out with kicks. Crews goes to the top rope but KUSHIDA cuts him off. Crews forearms him down to the mat but KUSHIDA gets right back up and hits another handspring kick. KUSHIDA back to the top rope with Crews and he somehow comes crashing down with Crews in an armbar submission. That was awesome. Crews fights out of that but KUSHIDA turns it into a Hoverboard Lock and that gets the win.

K-Tank’s Take: This was the best Crews has looked in a LONG time and really just a reminder of how he was plucked from NXT far too soon. He could certainly use a reboot there like Tyler Breeze. This may have been KUSHIDA’s best match in NXT too. Definitely go out of your way to watch this one.

We go to Keith Lee being interviewed earlier, and he’s asked about his year in NXT so far. He says a tenure to him means progress. But are we talking about all his start and stops? He’s been a year and all he heard about was how opportunities would be laid at his feet. But he’s been looked over and passed by instead. There’s 8 guys fighting in a tournament for a title shot, but he didn’t see anything like that when he came in. Now everyone is talking about Damian Priest. Maybe he needs to be the one to change the narrative. It should be him they’re talking about. That’s actually a great idea. So next week, it’ll be Lee vs. Priest. 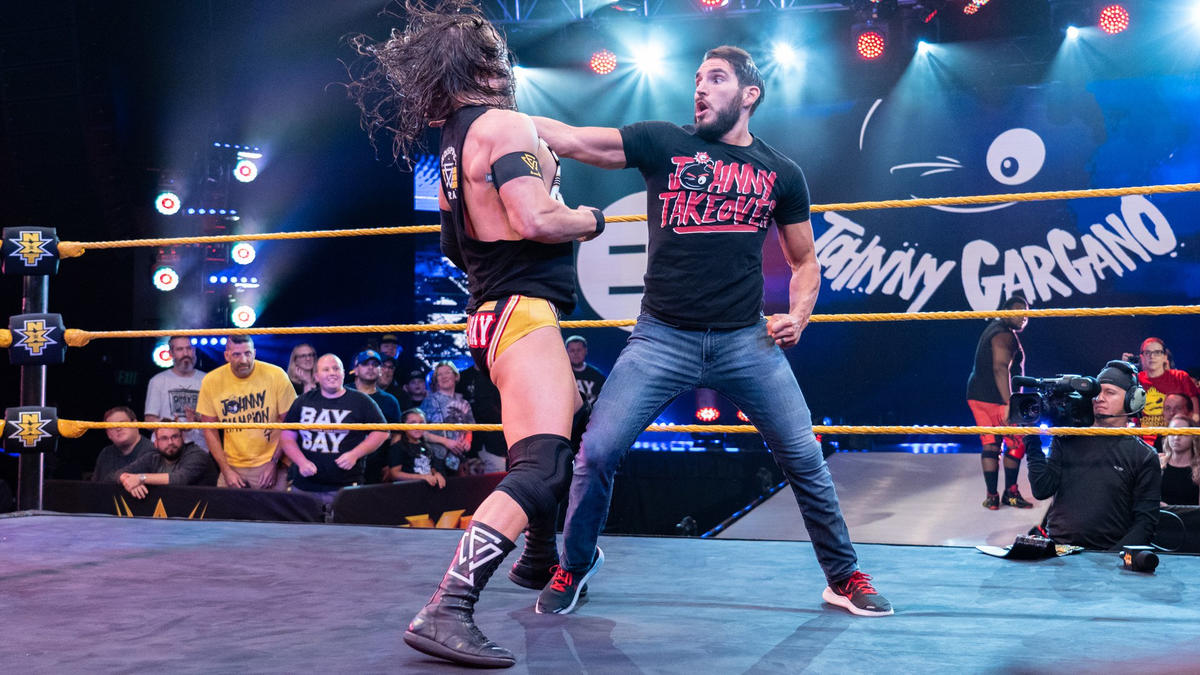 Cole talks about how he’s been all across the world on the Bay Bay championship tour. He’s shown what a true champion is. There is an Undisputed power switch happening in NXT. He never said he wouldn’t be a fighting champion, so he’s putting the NXT title on the line tonight. And it’s going to be against…

He cuts to a video of Johnny Gargano at a wrestling school, showing off his NXT Championship to some of the students. Cole tells one of the students to come on down. Twan Tucker is his name. Cole says he’s giving Twan the opportunity of a lifetime. There will be no Undisputed Era so he’s giving Twan a fair chance. Twan says that’s too bad it’s just them two because he didn’t come alone. There’s Johnny Gargano’s music and Johnny has finally returned to NXT. Gargano takes out Cole with a combo of superkicks as they end up fighting through the crowd.

Cole hits a stiff back elbow to try and get some separation but it doesn’t last long as Gargano goes right back to attacking Cole through the crowd. The refs finally get them separated and Cole tries to hold up his title and shake it off but Gargano comes flying from the ramp and takes him out with a huge cross body. They fight back into the ring and Gargano hits a couple more superkicks before locking on the Gargano Escape. Cole taps out repeatedly but Gargano will not let go as the refs pull on him. Gargano finally lets go and holds up 3 fingers and says one more time as our show ends.

K-Tank’s Take: Great way to bring back Gargano. That segment went perfectly and really reignited the feud. It was announced after the show by William Regal that they will have another 2 out of 3 falls match at Takeover: Toronto. This time, however, it’ll be a 3 Stages of Hell match. Cole can pick one stipulation and Gargano can pick one stipulation. Should they need the 3rd fall, Regal himself will pick that. Some people will complain with all the dump 2 out of 3 fall matches Raw and Smackdown are doing that NXT is doing one too, but in my opinion, this is totally different. It makes sense in the story and the fact that it’s 3 Stages of Hell takes it to another level.

That’s it for this week. Until next time, don’t do anything I wouldn’t do… but if you do, name it after me.