Welcome one and all to another installment of the NXT Spotlight here at TJRWrestling. I apologize for the lack of review last week, work and the 4th of July holiday made it tough for me to find time to watch the show and write. The results from last week were Mia Yim defeating Aliyah, KUSHIDA defeated Jeff Parker, Cameron Grimes (Trevor Lee) defeated Isaiah “Swerve” Scott (Shane Strickland/Killshot) in the NXT Breakout Tournament, & Roderick Strong defeated Tyler Breeze. This week we have a title match on the card, along with the 3rd match in the NXT Breakout Tournament. So let’s get to it! 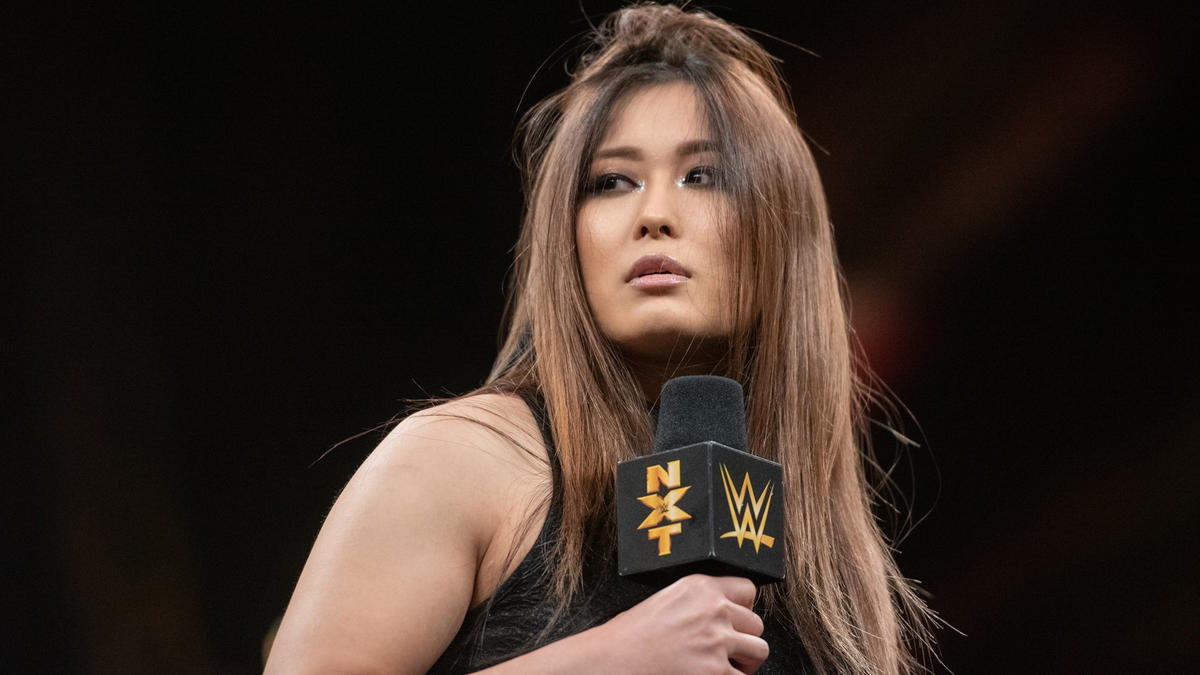 The New Side of Io

Io Sharai starts our show with a totally new entrance and look. All black and white lighting with new music as she wears all black and looks tormented while yelling at some of the NXT Universe. We see the recap of what she did to Candice LaRae two weeks ago after her cage match with Shayna Baszler. Io hesitates to speak at first as the crowd boos her relentlessly. She finally says she doesn’t need any friends and she doesn’t need any of the fans. She drops the mic and makes her way back up the ramp.

We go to a media room where Velveteen Dream is holding court. He says he’s here to answer any of the questions that are rumbling around NXT. The first question is in regards to who the first challenger will be for his North American Title. The Dream did not approve that question. Cathy Kelley has a question, which makes Dream smile big and remove his sunglasses. She asks about Roderick Strong continually asking for a title shot. Dream calls her “Queen Cathy”. (They’re dating, which is what makes this tongue in cheek and very funny.) He says with love and respect, she needs to calm down with that question, because Roderick hasn’t proven anything to show he’s a contender for Dream. That’s enough questions for the Dream. 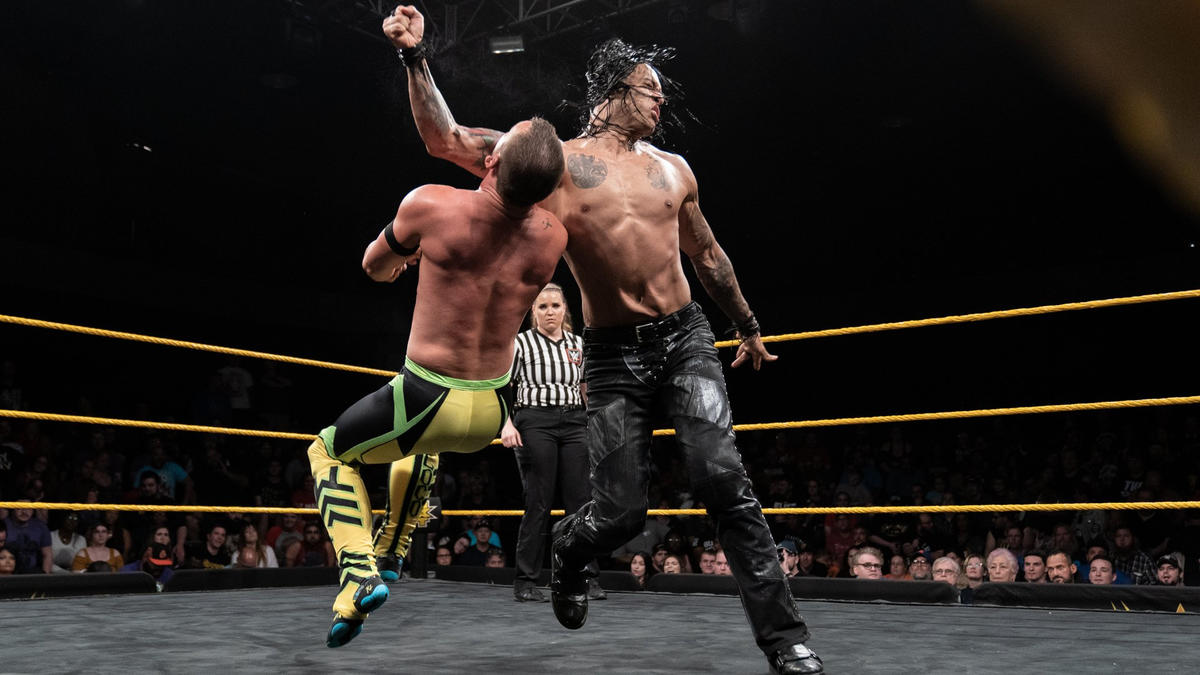 Loco is hailed from, “Mexico, New York”. Does that actually exist? The bell rings and Priest hits a pump kick to the back of Loco’s head. Big back elbow in the corner followed by a release vertical suplex. Loco with a right hand, but that was a bad idea as he runs into a brick wall and gets turned inside out. Priest throws him into the ropes and drills him with a lariat. Priest with his cyclone kick out of the corner and then hits his version of Cross Rhodes, which Mauro says is known as The Reckoning.

K-Tank’s Take: I think Priest is in line for a big push. He has an “it factor” in my opinion that is undeniable. I may be higher on him more than others but I see a ton of potential.

So weird to see an Evolve Wrestling commercial.

We get a new Killian Dain vignette. He’s telling a harrowing tale of where he grew up with all the violence and riots. Really good stuff here and makes him look beyond intense. 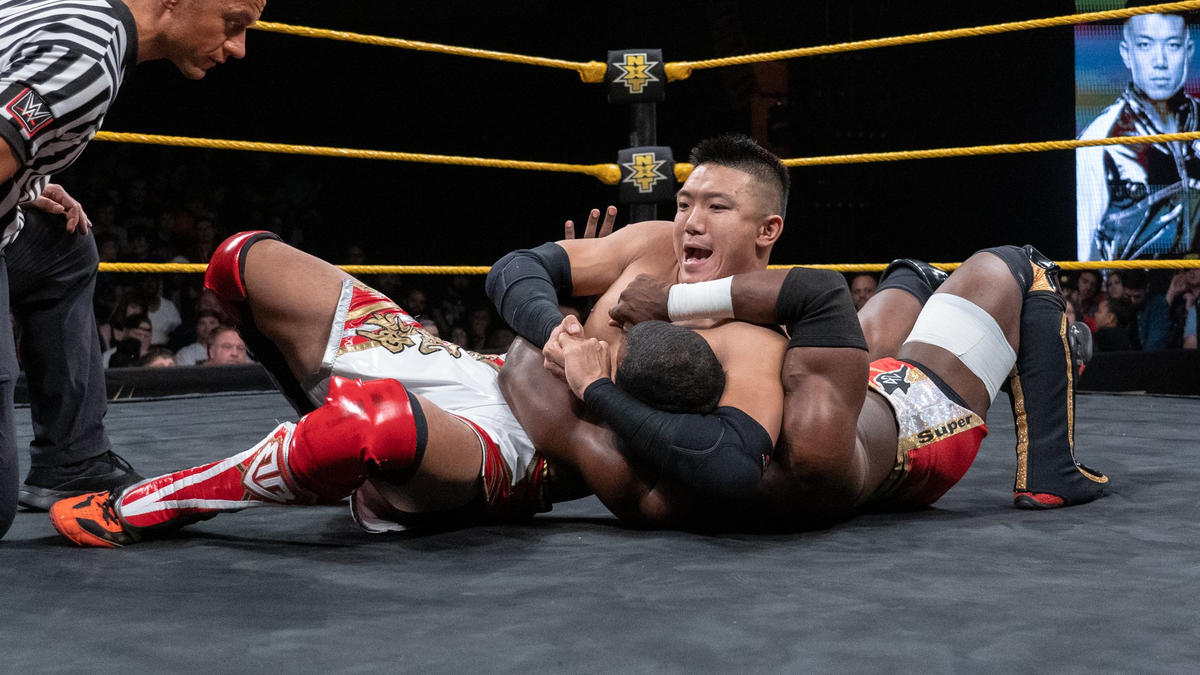 Myles is the former ACH and BOA is a Chinese recruit for the Performance Center. Myles is still wearing his ACH gear. Myles goes for a handshake and BOA bows to him. Myles had a funny reaction to that. BOA has the size advantage in this one. BOA goes for a kick against the ropes but Myles ducks. BOA with a headlock takedown. Both men countering each other’s attempts at headlocks and armbars. BOA with a wrist lock that Myles springboards off the top rope to escape. Myles showing off his athleticism now after a deep arm drag. He backflips away from a BOA kick and then hits a dropkick. Double leg takedown followed by another wrist lock.

BOA escapes and goes for a back body drop but Myles catches himself and turns it into a pinning attempt. BOA kicks out and then drops Myles with a big kick. BOA with a Mui Thai clinch and bringing his knees to Myles’ face. Myles gets tied up in the ropes and BOA brings him down with a strong ax kick. BOA with a standing submission but doesn’t hold on long and instead feeds kicks to Myles in the corner. Single leg shotgun kick sends Myles back into the corner. BOA brings him out with a nice butterfly suplex for a two count. BOA tries a cross arm breaker but Myles stacks him up for a two count to break it. BOA with strong kicks to the sternum of Myles as he’s down on his knees. Myles starts calling for more and then catches one of the kicks. Big chop and then Myles unleashes kicks of his own. Myles with a couple running forearms and then a dropkick.

BOA in the corner and Myles hits a discus clothesline. Myles to the top rope and hits a 450 Splash, which Mauro calls Midnight Star, for the win.

K-Tank’s Take: Not as good as the first two matches in the tournament, but a solid showing for both nonetheless. They’re doing a “smiles for Myles” thing with Myles as he’s constantly doing a huge cheesy grin throughout the match. I don’t necessarily like it, but maybe it gets over. He was my favorite when the tournament was announced and I’m going to stick to it.

Shayna Baszler is now with the media and is asked about Mia Yim calling her out recently. Shayna says she’s holding the biggest target in the division. She says Mia has a great story, but it’s the most common story ever. It’s going to take more than a great story to impress her. The result will always be the same, tap, nap, or snap.

We get a vignette for Keith Lee. He says he’s been here for almost a year. He’s faced freaks, knockout artists, and all type of other athletes. He’s never been “the chosen one” though. No one looks at him to put the company on his back. He’s always said though that he is limitless and everyone will bask in his glory. He says in year two, there’s going to have to be some changes. He’s going to have to be so much more than he has. Limitless isn’t going to cut it anymore. He wants to be The Guy, The Money. He will be the main event. He will prove that by becoming infinite. That was a DAMN good promo/vignette. Hopefully, it’s leading to something for Keith finally.

We go to William Regal outside Full Sail and he talks about how a lot of athletes from outside NXT want to come to NXT just for the ability to face KUSHIDA. Next week will continue that trend as Apollo Crews returns to NXT to take on KUSHIDA. Also, Adam Cole will apparently have an NXT Title defense next week, but the opponent is not named. 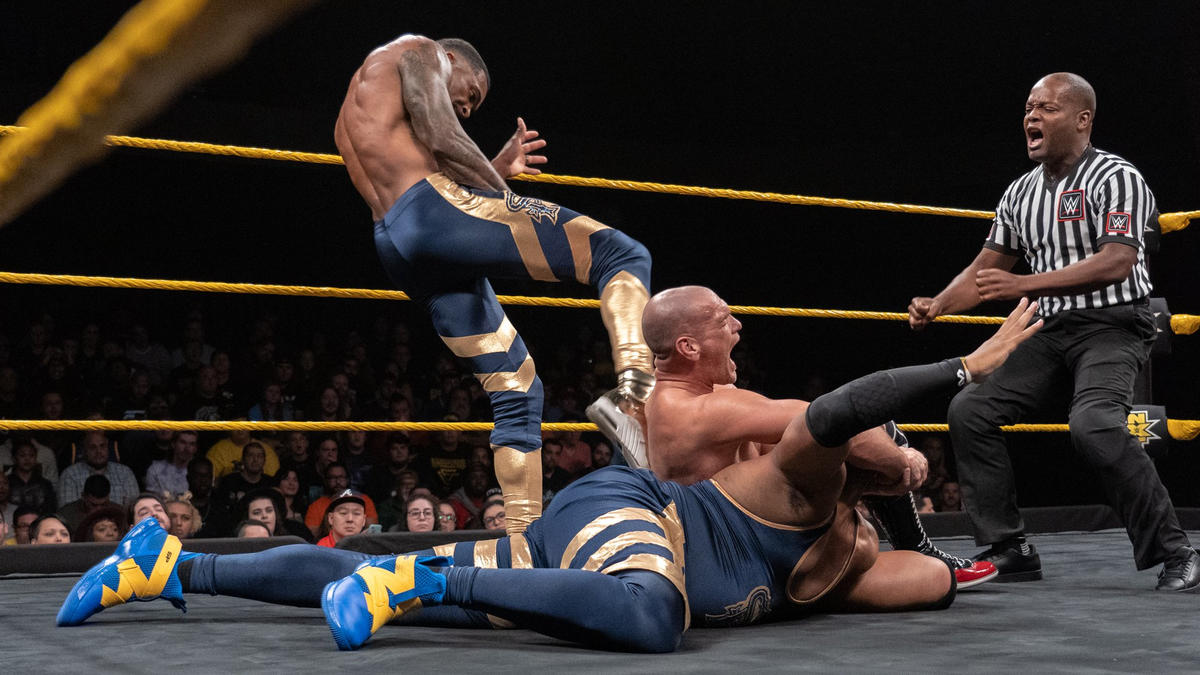 There are about 12 minutes left in the show as the bell rings. Lorcan and Burch want to shake hands, which The Profits accept, so good sign of sportsmanship to start. Lorcan and Montez Ford start us out. Ford uses his athleticism to escape a wrist lock and turns it into an armbar. Dawkins with a blind tag and Lorcan runs into a shoulder tackle from Dawkins. Dawkins rolling around with Lorcan caught in a front face lock. Lorcan escapes and is able to tag in Burch. Burch with a side headlock that Dawkins powers out of. Dawkins with a couple of leapfrogs on Burch, Ford sneaks in the ring and they drop Burch with a double flapjack. Lorcan comes in and they flapjack him onto Burch. Dawkins sets up both opponents on the ropes and lifts them up by the legs as Ford comes from behind with a leapfrog splash across his opponents, ala World’s Greatest Tag Team.

Burch and Lorcan regroup on the floor and then Burch comes in the ring and looks for another handshake as Dawkins extends his hand. This time though, Burch with the cheap shot. Burch off the second rope with a front dropkick. Dawkins brought to their corner as Lorcan tags in. They hit a double team Russian Leg Sweep. Dawkins tries to fight off both men but they end up hitting a double suplex and Burch gets a two count. Burch stomping a mudhole in the corner and then locks on a crossface submission. Dawkins tries rolling through it, but Burch keeps it hooked and Ford has to come in to break it up.

Burch goes for another front dropkick off the second rope but Dawkins moves out of the way this time. Lorcan and Ford are able to tag in. Ford tries a back body drop on Lorcan but there’s a little bit of a hiccup, but he’s able to seamlessly turn it into a spinebuster. Well done by him. Dropkick on Burch. Back suplex on Lorcan, followed by a standing moonsault for a two count. Dawkins tags back in and he hits Lorcan with his cyclone avalanche. They hit a double team Acid Drop that leads to another two count. Ford is back legal and now They set up for Doomsday Device, but this time it’s Dawkins going to the top. Lorcan is able to send Ford into Dawkins though. Shotgun dropkick by Burch, who is now legal. Huge half and half suplex on Ford and that leads to a two count for the challengers.

Ford is able to prevent Burch from tagging in Lorcan, but Burch hits a release German on Ford. Ford ends up in his corner, so Dawkins tags back in. All four men in now as everyone is taking out everyone. Ford and Lorcan are left in the ring. Lorcan with chops, Ford with kicks. Ford charges Lorcan, who moves out of the way, and Ford just does a huge somersault dive over the top rope to take out Burch instead. Back in the ring, Dawkins with his version of Sky High on Burch after taking out Lorcan on the floor, Ford back up top with his awesome Frog Splash and the champs retain.

Post match with the Profits celebrating, Kyle O’Reilly and Bobby Fish show up and give them mock applause as our show comes to an end.

K-Tank’s Take: Really good stuff here from my two favorite tag teams. I would’ve liked to see them get a couple more minutes but they really made the most of it. Street Profits continue to get better, which is a good sign since they’re seemingly headed to Raw. With Undisputed Era making their intentions known at the end, I wouldn’t be surprised to see a quick title change soon. Perhaps they stretch it out to Takeover, though.

That’s it for this week. Thanks as always for tuning in and until next time, don’t do anything I wouldn’t do… but if you do, name it after me.