Welcome one and all to another installment of the NXT Spotlight here at TJRWrestling. We are now past all the action that took place in Chicago and back in Full Sail. However, the United Kingdom somehow found its way in between Chicago and Orlando, and during that stop we now have new NXT Tag Team Champions. Moustache Mountain, Tyler Bate & Trent Seven, defeated Undisputed Era in the shows from Royal Albert Hall that aired this week on WWE Network. I have not watched the match yet, but I’ve heard it’s fantastic. So will it be a long reign? Time will tell. So let’s get to the action! 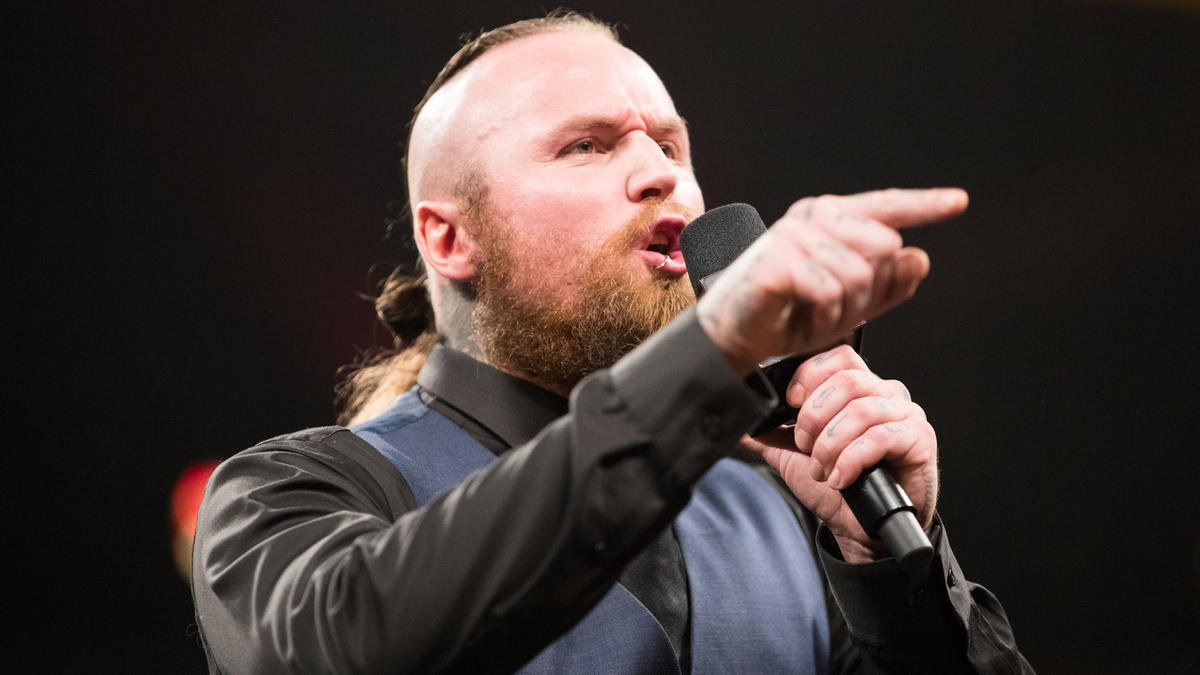 Aleister Black kicks off our show with a promo. He says that Lars Sullivan did something he didn’t think was possible and proved he truly is a freak. However he faced that adversity and made it fade to Black. Tommaso Ciampa walks out now and says he may have stood face to face with adversity, but now he’s face to face with the devil. He doesn’t buy what Black is all about. Black may be the NXT champion, but the title is what makes Aleister Black. He barely got by Lars Sullivan, but in the main event, Ciampa beat Johnny Freaking Wrestling. Not only did he beat Gargano, he did it with his hands tied behind his back. Now that all that is in the past, he can focus on the title of Black’s, because he has something that Ciampa wants. Black says that if Regal makes the match happen, Ciampa will realize what everyone else knows, he will kick Ciampa’s head off. Ciampa says that something Black needs to understand is when he beats Black, he will lose a lot more than the title. He will lose the mystique and all he needs is one title and one moment. In that moment, his title reign will fade to Black. Ciampa sits in Black’s seated pose and waves bye. Black isn’t happy and gets out of the ring to confront him but Ciampa gets up and makes his way out as Black stares him down.

K-Tank’s Take: Ciampa came across great here. Black had a couple lines that felt very forced and I think anyone would agree the mic work isn’t his strong point yet. He’s getting better though. This is an interesting turn of events. Perhaps a triple threat match in Brooklyn and then the finale to the feud between Gargano and Ciampa in November?

The announcers show that Lars Sullivan finished his match with Aleister with a broken jaw. They show an x-ray and it is cracked straight through, just off his chin. I would imagine that happened when Black got the knees up on his diving headbutt. Unfortunate injury for Lars, who has had a bit of injury problems as of late.

Now we go to “earlier today” where Vanessa Borne is meeting with the media. She asks them why Kairi dresses like a pirate? It’s stupid. What’s worse is that everyone admires her for it. They should all be admiring her instead. She’s now going to take Kairi into the ring and make sure she doesn’t walk out. 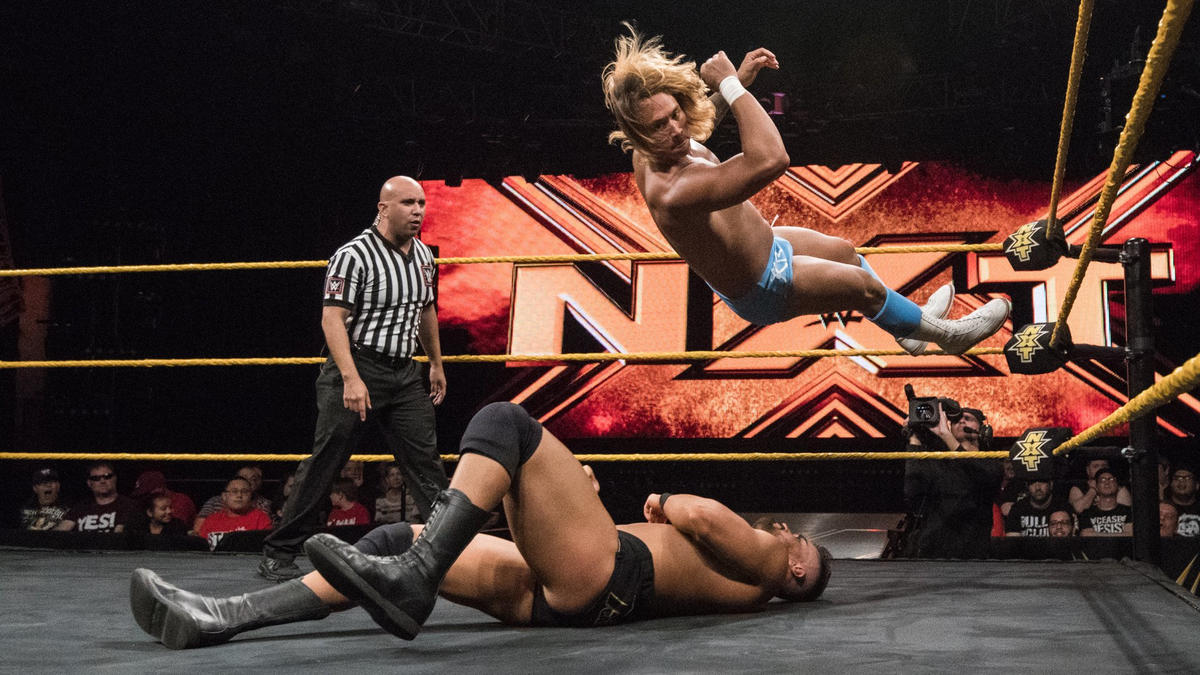 Max Humberto gets a chant even though his tights say Max Castellanos. That’s the most interesting part of this match. Kona with very basic offense and then dumps Max to the floor. Reeves with aggressive punches and kicks. Double underhook suplex out of the corner and then his trust fall elbow drop off the second rope. Max with a couple punches but then runs into a big boot, which leads to the Hawaiian Drop.

K-Tank’s Take: NEXT! There’s just too much talent in NXT for this. I know at the heart, this is what NXT is for, but I think we’re past this. He’s not the next Velveteen Dream, as it’s clear he doesn’t have that much charisma to demand TV time and attention. 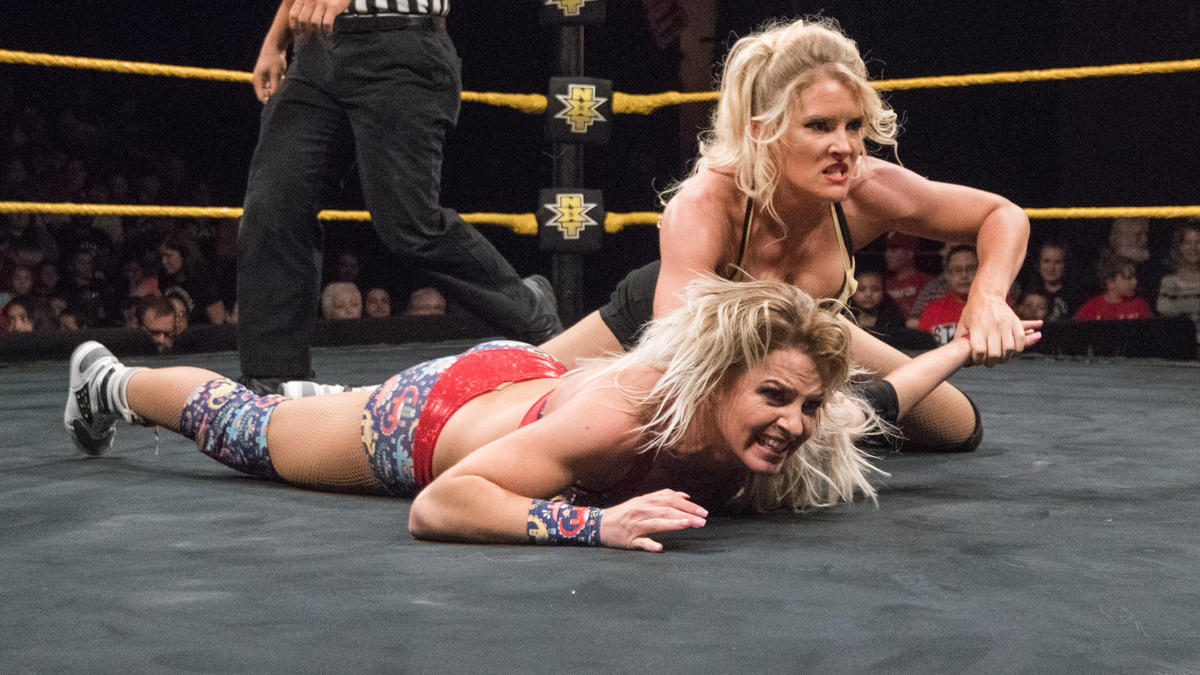 Big shoulder tackle from Lacey to start. Make that two of them. Candice trips her down, but Lacey returns the favor. Candice gets up and lands two arm drags and then a Japanese arm drag. Lacey kicks out of a pin. Lacey sends Candice into the corner and then attacks the left arm of Candice. She ends up wrapping it around the ring post before going for a pin, but Candice kicks out. Candice tries to surprise Lacey with a roll up but doesn’t work and then Lacey goes right back to the arm. Lacey really wrenching on the arm in the corner, using the 5 count to her advantage, before coming at Candice with her popup Bronco buster. Lacey hooks on a lazy cobra clutch. Candice escapes and then does the snapmare, rolling neckbreaker ala Mr. Perfect. Candice only able to use her right arm, but laying in the forearms and chops with it. Running back elbow in the corner and then comes off the 2nd rope with a facebuster. Candice drops Lacey with a Unprettier and then comes off the second rope with a beautiful lionsault for the win.

K-Tank’s Take: Kind of clunky at the end but Candice with great selling throughout the match and I really liked her last few moves. Mauro called the Unprettier a Vertebreaker and it made me laugh because he typically doesn’t mistake moves like that. Since we don’t know the fallout from Shayna and Nikki yet, not sure where Candice stands in terms of a title shot.

We go to backstage now with Johnny Gargano. He’s asked how he’s recovering after his match at Takeover. He says Candice LaRae is his favorite wrestler, but it’s hard to focus when he’s replaying what happened at Takeover over and over. When he thinks about what Ciampa did with Gargano’s wedding ring and then winning the match, he doesn’t let Ciampa win. they’ve each won once and so he’s going to Regal to make it happen again. He doesn’t care if it’s next week, in Brooklyn, in the streets, or in the grocery store. This ends when Ciampa does.

Now we go to Heavy Machinery who are in their abode grilling some meat. They’re calling out The Mighty and the fun and games are over.

We now see a tweet from William Regal that says Gargano needs to move on from Ciampa, so next week he will take on EC3.

Now we’re back to Candice LaRae backstage and she’s asked how hard it is to focus with everything going on. She says she’s learned from the past in terms of letting what’s going on in his life, stopping her from achieving her dreams. He’s inspired her to go after her dreams. Nothing is going to stop her now from going after the women’s championship.

Back to ringside, Moustache Mountain, the new NXT Tag Champions, come out for their first appearance as champions. It looks like they’ll be taking on a couple of enhancement talents but Roderick Strong comes flying out of nowhere and takes out both of them with one flying knee. That was pretty cool. Both men are easily disposed of by the Undisputed Era. O’Reilly tells the champs that what happened in Royal Albert Hall was a fluke. They only won because they went above their abilities thanks to their lame country fans. Undisputed Era are taking the titles back because this is their Era and the champs are just living in it. It looks to be a 3 on 2 attack until Ricochet’s music hits and he comes crashing the scene and charges the ring to even the sides! 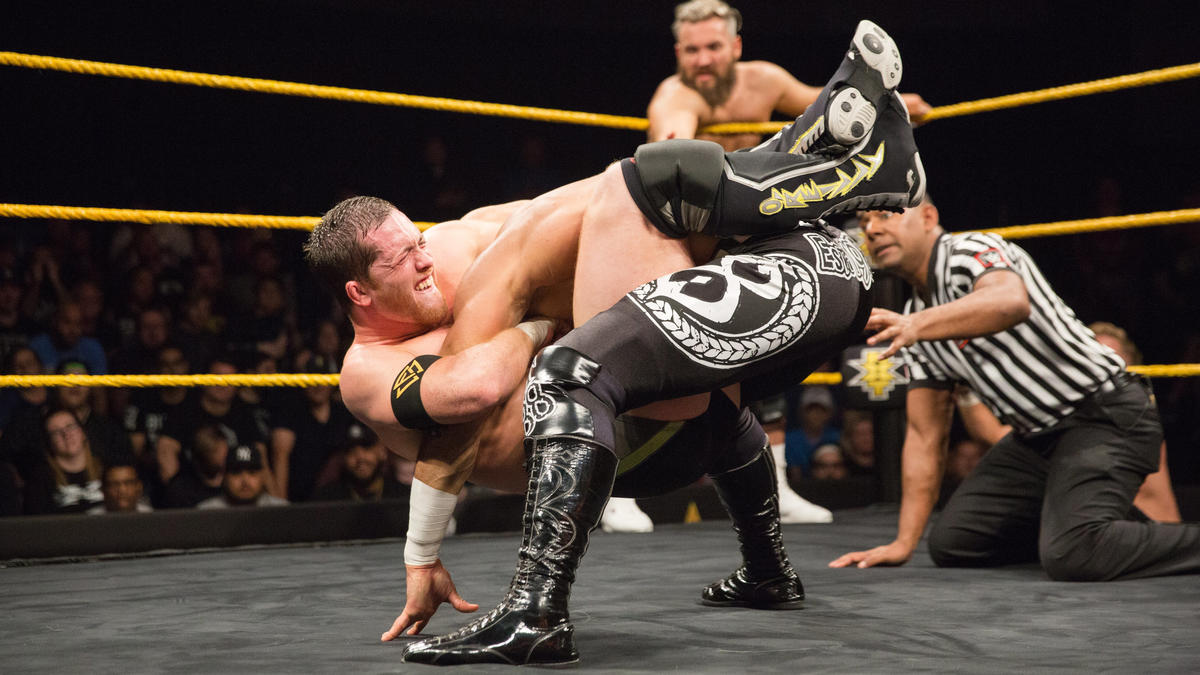 We went to a commercial after Ricochet came out and then when we return, this six man match has been created. Bate and O’Reilly start things out. Bate with a couple dropkicks and then Seven tags in. He drops O’Reilly with a fireman’s carry, using his feet to hit a charging Adam Cole first, and then Bate and Ricochet land some tope’s on Cole and O’Reilly. O’Reilly manages to gather himself to get Seven into his corner and tag in Cole. Seven with two thunderous chops, and as Cole tries to avoid a 3rd, Seven drops him with a DDT instead. Bate tags in and as Roddy comes in to try and even the side, both Era members get bodyslammed. Seven gets “propelled” by Bate to land a senton splash, that was funny, and then Ricochet comes in and he’s actually able to be propelled by Bate for a moonsault onto both members. Ricochet with a pin but Roddy kicks out. Bate back legal now. Roddy with a knee and a forearm but Bate still catches him with the suckerpunch. Bate ends up making it 3 for 3 on Era members with the sucker punch. Era still manages to use the numbers to their advantage though and Cole lands a cheap shot that leads to a Roddy backbreaker on Bate. Era now works Bate over in their corner with quick tags and strikes in the corner. Roddy drops Bate with a fantastic dropkick. Cole comes in and nails a snap suplex with a pin but Bate kicks out. More quick tags and wear down offense from the Era. Roddy drills a shoulderbreaker, something you don’t see very often these days. Roddy with a series of elbow strikes. Bate finally connects with an exploder suplex that gives him some separation and allows him to tag in Ricochet. O’Reilly tags in for the Era. Ricochet is going 100MPH and is taking out all three members. Just lightning fast offense. Huge springboard European uppercut off the top rope onto O’Reilly. Ricochet lands a northern lights with a bridge, but O’Reilly somehow flips him over and turns it into a choke. Ricochet manages to get to his corner and tag in Seven. Seven ends up nailing a Michinoku side slam for a two count. O’Reilly charlie horses Seven’s thigh and now Era triple team him but Ricochet makes the save during a pin. Cole is now legal with Seven as Cole pulls down his knee pad. Seven fires up though with a huge lariat. Ricochet tags back in now it’s chaos with all six men landing finishers. Cole and Ricochet are the last two to fall as Cole hits a superkick but Ricochet fires back with an enziguri. The crowd is going nuts, and rightfully so. We’ve got four men fighting on the apron and two in the ring. O’Reilly with a flying knee onto Seven, Roddy with a backbreaker on the apron to Bate. Ricochet with a lariat to Cole. Ricochet somehow back handsprings out of the way of Total Elimination from O’Reilly and Roddy. That was insane. Ricochet with a jumping flatlinter on Cole and then sets him up for the 630. He nails it! Ricochet with a pin but O’Reilly pulls Cole out of the ring! Ricochet dives onto O’Reilly but Roddy comes from behind and drills a release suplex onto the edge of the ring on Ricochet. Roddy throws him back in the ring and Cole covers for the win. That went about 14 minutes.

K-Tank’s Take: Yeah, I had no chance of keeping up with that match. That was insanity. That was a Takeover level match. Pretty surprising to see Ricochet take a pinfall loss but if it’s leading to him vs. Cole for the North American Title, bring it on! Obviously Roddy and O’Reilly will get their rematch sooner than later with Moustache Mountain and it wouldn’t surprise me in the least if it was a short reign.

That’s it for this week. Until next time, don’t do anything I wouldn’t do… but if you do, name it after me!