Welcome one and all to another installment of the NXT Spotlight here at TJRWrestling. We are back to Full Sail this week as we start to head towards SummerSlam weekend in Toronto. John has posted the expected lineup on the website, so if you’re into spoilers, you can check those out. Regardless if you want to know or not, we have to see how we get to that point so let’s get started! 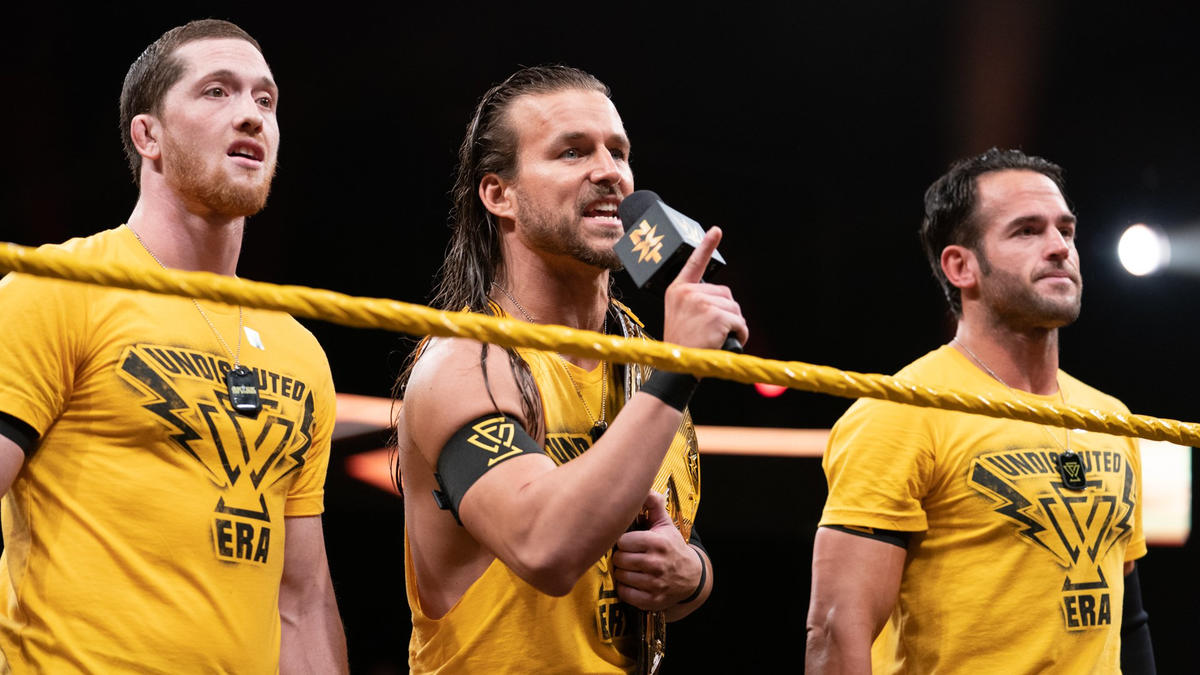 This Era is Undisputed

Our show kicks off with all 4 members of the Undisputed Era coming out to the ring. Adam Cole gets a huge welcome from the fans as the new champion. He says he told us all that the Undisputed Era would be draped in gold in 2019. His NXT title is just the start of that. The Era doesn’t start at the bottom and hope their work pays off. They go after the top guys. They take whatever they want. Anyone that gets in their way, they make sure they’ll regret it. Starting with the NXT title, they’re going to remake NXT into an Undisputed image. They then proceed to show a new NXT open with footage just of them and say that’s how the show should start every week. It was pretty well done.

O’Reilly says it was just something he threw together last night. Cole says they have Undisputed power. So this is a message for the other champions in NXT, they need to shine up the titles they have because he wants them to look pretty for Roddy, Kyle, & Bobby. They will have all the power in 2019 and they will not stop until they do. No one can touch them, not even Triple H himself. Cue up Velveteen Dream’s music to cut them off.

Dream says he’d like to touch Cole if he thinks no one can touch him. It’s cute they think the Era is the reason NXT has gone to the heights it has. It’s really about Dream Over though. The NXT Title would look amazing paired with his North American title. Roddy cuts in and tells him to Dream On. He doesn’t even deserve to be the North American Champion. Now cue Matt Riddle’s music. BRO. Riddle wonders how hard did he hit Roddy at Takeover? He’s beaten Roddy and he’s beaten Cole too. Cole says he runs his mouth about something he doesn’t know. Riddle cuts him off and says he knows he’s insanely good looking and is a stallion. Cole calls him a moron. He says Riddle is jealous because Cole has held every title in NXT. He’s jealous because Riddle has dropped the ball on every title opportunity he’s gotten. He tells Riddle to go back to writing reviews online about matches involving people in the Attitude Era. Riddle’s era will never come.

Now let’s cue Tyler Breeze’s music. Tyler says he was listening to all this while talking to William Regal. He doesn’t care about who is undisputed, he doesn’t care about who’s better looking (it’s him), but what he does care about is the Era trying to take credit for building a brand that he was the one to build before any of them were even here. So Regal took his suggestion for tonight and it’s going to be Breeze, Dream, & Riddle vs any three members of the Era tonight.

K-Tank’s Take: Good promo to start things off. Johnny Gargano is rumored to have a knee injury. He’s not listed on this weekend’s loop of Texas, so in case you were wondering why it wasn’t a 4 on 4 promo, now you know.

Next week there will be a steel cage match for the NXT Women’s Title between Shayna Baszler and Io Sharai. We get a recap of their feud after the announcement is made. 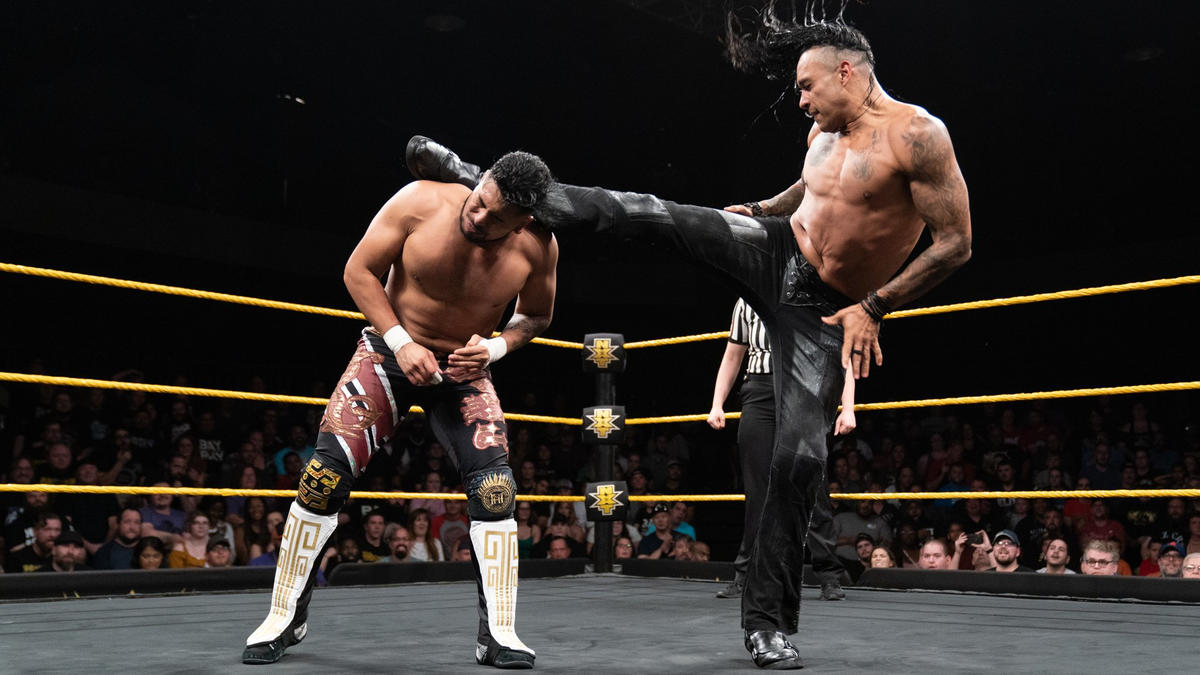 Priest is the newly named Punishment Martinez. Priest gets a unique entrance, definitely a superstar treatment for NXT. Priest comes out of the corner and gives Mendoza a big boot. He follows that up with a big forearm. Priest with the arm clap around the ears of Mendoza and then another forearm. Mendoza fighting a way out of the corner and then comes off the second rope with a roundhouse kick. Priest stays on his feet. Mendoza tries a springboard attack but Priest moves. Mendoza lands on his feet and hits a dropkick but Priest still up. Mendoza back to the top rope and walks across it and comes off with a dropkick that sends Priest to the floor but he stays on his feet. Priest is angry now. Mendoza dives through the ropes but Priest catches him and chokeslams him on the apron. He throws Mendoza back in and hits a spinning kick to the back of the head and then connects with a version of Cross Rhodes for the win.

K-Tank’s Take: Priest is being called the “Archer of Infamy”, and some of his entrance had to do with that. He was presented as a star and came across as a big deal. I liked that he never left his feet but still gave Mendoza a little bit.

We go to William Regal’s office, who announces we have more talent in the PC than ever before. He’s going to give some of those that haven’t been on TV before will now get an opportunity. There will be an 8 man tournament starting next week called the Breakout Tournament. The winner gets an NXT title opportunity of their choosing. The 8 men are Jordan Myles (FKA ACH), BOA (WWE prospect from China), Cameron Grimes (FKA Trevor Lee), Isaiah “Swerve” Scott (FKA Shane Strickland), Dexter Lumis (FKA Sam Shaw), Bronson Reed (FKA Jonah Rock), Angel Garza (FKA Humberto Garza), & Joaquin Wilde (FKA DJZ).

K-Tank’s Take: What a great concept to get some guys on TV. Wouldn’t the main roster benefit from something like this instead of the 24/7 title? They did put up the FKA’s on the graphics, just in case anyone was wondering. There is a ton of talent in this tournament and should be a lot of fun to watch.

We get a good video package hyping up Mia Yim, who talks about her upbringing and where her career has taken her to get to where she is now in NXT. The fans got her here and she’s not going to let them down. She says she’s going to be the protector of the women’s locker room as long as Shayna is champion. She’s the HBIC and for Shayna, she is Hell and the high water. 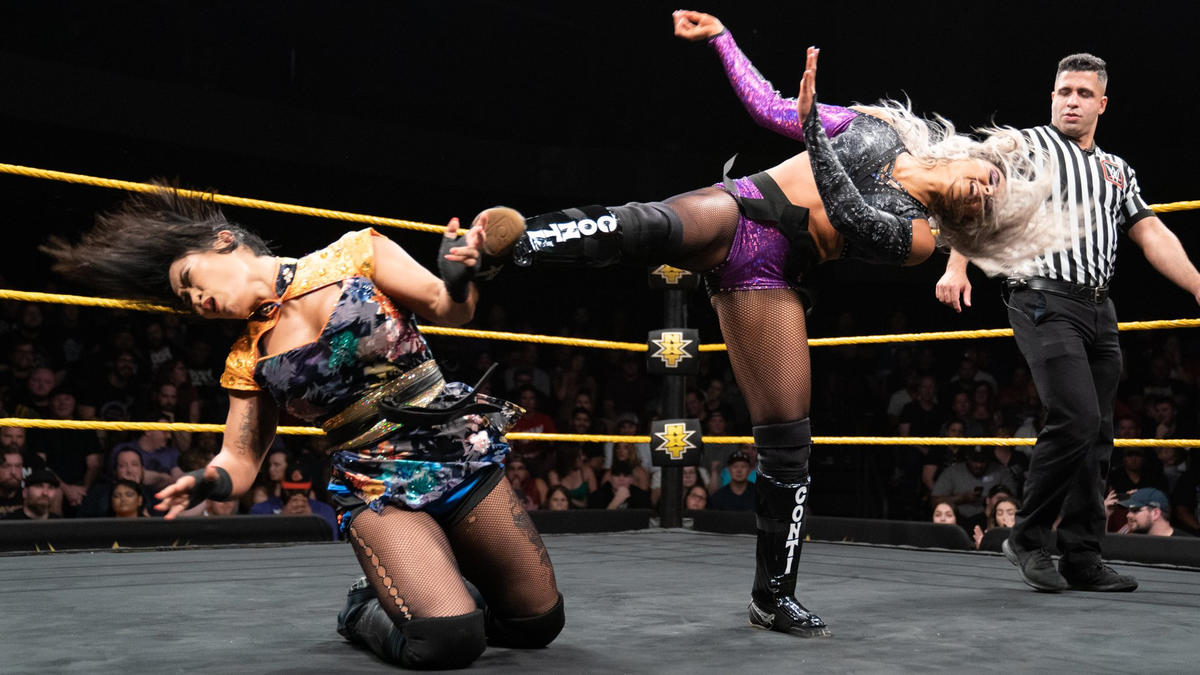 We get a handshake to start the match. They go to a test of strength. Conti is able to turn that into a package pin but Li kicks out at one. Conti with a Judo throw but misses a follow up kick and Li rolls her up for a pin but Conti kicks out. Li unleashes a flurry of kicks but Conti avoids them. Some sloppy action until Li hits a shotgun dropkick. Li goes for another kick but misses and gets caught in the ropes where Conti kicks her in the back of her knee. Conti with a couple pins but Li kicks out. Hard kick to the spine and another pin but still nothing. Conti just getting frustrated and trying multiple pins to no avail. Conti stomps Li into the corner but then misses a double running knee attack. Li sweeps the legs and then hits a couple kicks. Li comes off the second rope, misses Conti but lands on her feet and hits a roundhouse kick for the win.

K-Tank’s Take: I did a column last week talking about the state of NXT and things I want to see more and less of. I said I wanted to see less meaningless matches. This was exactly what I was referring to. Not a good match and didn’t really accomplish anything. Conti was randomly a babyface at first, until she wasn’t, it was just weird.

It’s now time for a special edition of Street Talk with the new NXT Tag Champions, The Street Profits. Next week they have their first challenge against the Forgotten Sons. We then see them celebrating with the fans outside of Full Sail. 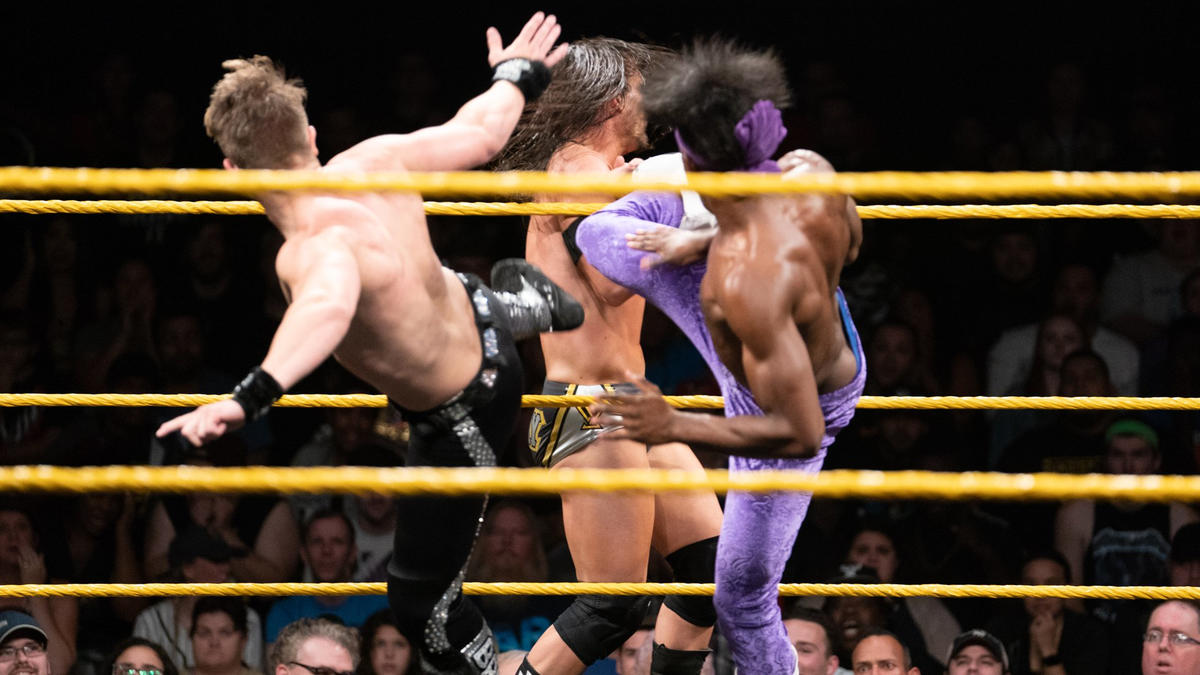 We’ve got about 11 minutes left in the show. O’Reilly is the odd man out for the Era. He mentioned on Twitter he’s been dealing with a back injury. Riddle and Cole start us off. Riddle with a go behind takedown right away. He then goes for a rolling knee bar but Roddy prevents it from happening. Cole gets Riddle in his corner and tags in Fish. Fish with some strikes in the corner and tags in Roddy. Roddy gets caught in a couple gutwrench suplexes by Riddle, who then tags in Dream. He holds Roddy up as Dream comes off the top with a double ax handle. Dream then hits a dropkick. Dream back to the top, but looks over at Cole and as he comes off, Roddy hits him in the midsection and is able to tag Fish back in.

Fish working over Dream but Dream springboards off the top rope and comes off with another double ax handle. Dream clears the Era’s corner and then hits a facebuster. He then hits an ugly looking Lionsault that had to rock Fish. Luckily it didn’t catch him in the face. The ref checks on Fish and as Breeze gets tagged in, Cole is able to tag in. Cole drops Breeze with a punch and tells him he doesn’t belong here. But as he comes off the ropes, Breeze catches him with a dropkick. Riddle is tagged back in and hits a fisherman’s suplex for a two count. Riddle goes for a deadlift German suplex, but Cole fights out of it. Riddle with a ripcord knee strike instead. Roddy and Fish come in the ring and they get disposed of immediately by Dream and Breeze. Riddle with two forearms and then an exploder suplex out of the corner on Cole, followed by the Bro-Ton. O’Reilly gets on the apron and that allows Fish to come in and take out Riddle.

Cole tags in Roddy and now the Era start to work over Riddle. Backbreaker by Roddy before tagging in Fish. Fish with kicks and then tags in Cole, who hits some knees to the spine and then a side headlock. Riddle gets up and hits a pump kick. Riddle tries something but Cole ends up turning into a backstabber for a two count. Roddy tags back in. Roddy quickly tags in Fish, who comes in with a slingshot senton. Snap suplex by Fish gets a two count. Cole back in and he attacks Dream. Riddle starts to fight back but Cole stomps on Riddle’s toes. Cole goes to the second rope, maybe for a Panama Sunrise, but Riddle catches him with a jumping knee.

That allows Riddle to tag in Breeze and Cole tags in Fish. Flying forearms by Breeze on everyone. Breeze ends up hitting the Beauty Shot but Roddy pulls Fish out of the ring before the three count. Breeze looks to dive to the outside but Dream tags in and that catches Breeze off guard. They superkick Cole off the apron but Roddy comes in, hits a jumping knee on Breeze and then connects with The End of Heartache on Dream and he’s just pinned the North American Champion.

K-Tank’s Take: Basic 6 man match, but some fun action. The story is Dream shouldn’t have tagged in and cost the team the match, as well as got pinned by someone who is now gunning for his title.

That’s it for this week. Next week looks to be loaded with the Steel Cage match, The Street Profits and the Breakout Tournament starting. So until next time, don’t do anything I wouldn’t do… but if you do, name it after me!