Welcome one and all to the latest installment of the NXT Spotlight here at TJRWrestling. We are just 3 days away from the huge Takeover event in Chicago, and with all the matches already set for the card, we just have a small amount of unfinished buisness before we get there. Let’s get to the action! 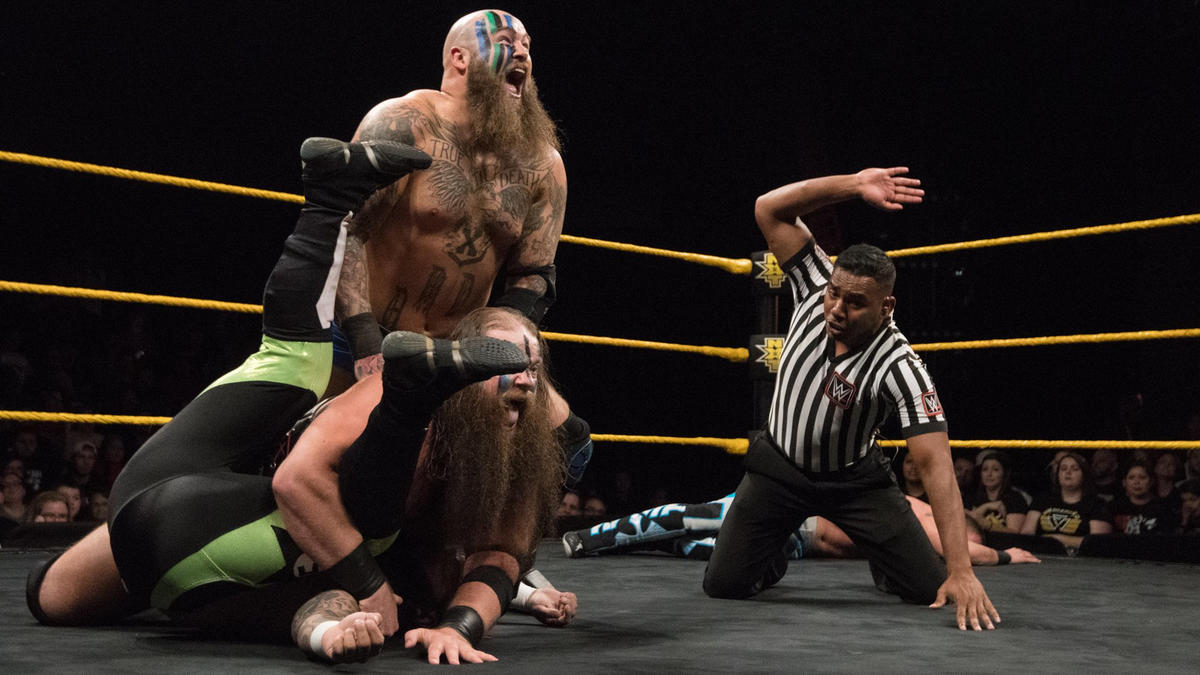 Hanson and Storm start off. Hanson throws Storm down immediately. Hanson cartwheels and then lariats Storm. Storm gets tossed into the wrong corner as Rowe tags in and the Raiders double team him out of the corner. Rowe drags Storm to his corner just so Martinez can tag in. Rowe dares Martinez to attempt something but Martinez just instead eats a headbutt and forearm smash. Hanson tags back in, more double team work in the corner. Rowe basically spinebusters Hanson into Martinez in the corner. Storm comes from behind Hanson and immediately regrets it. Rowe takes him out with a knee and now it’s time for The Fallout on Martinez.

Post match, the Raiders have mics and call out out The Mighty. They then proceed to almost kill Storm with a pop up powerslam that Hanson doesn’t catch him clean on so Storm comes damn close to being spiked on his head.

K-Tank’s Take: It’ll be good for War Raiders to have a feud to get involved in. These squash matches only go so far and they’re established as physically dominate at this point. Same for The Mighty as they’ll have someone to truly showcase their abilities against.

A fantastic Johnny Gargano/Tomasso Ciampa video preview for their match at Takeover is shown. You can watch that on our NXT Takeover Official Preview that John Canton joined me for. 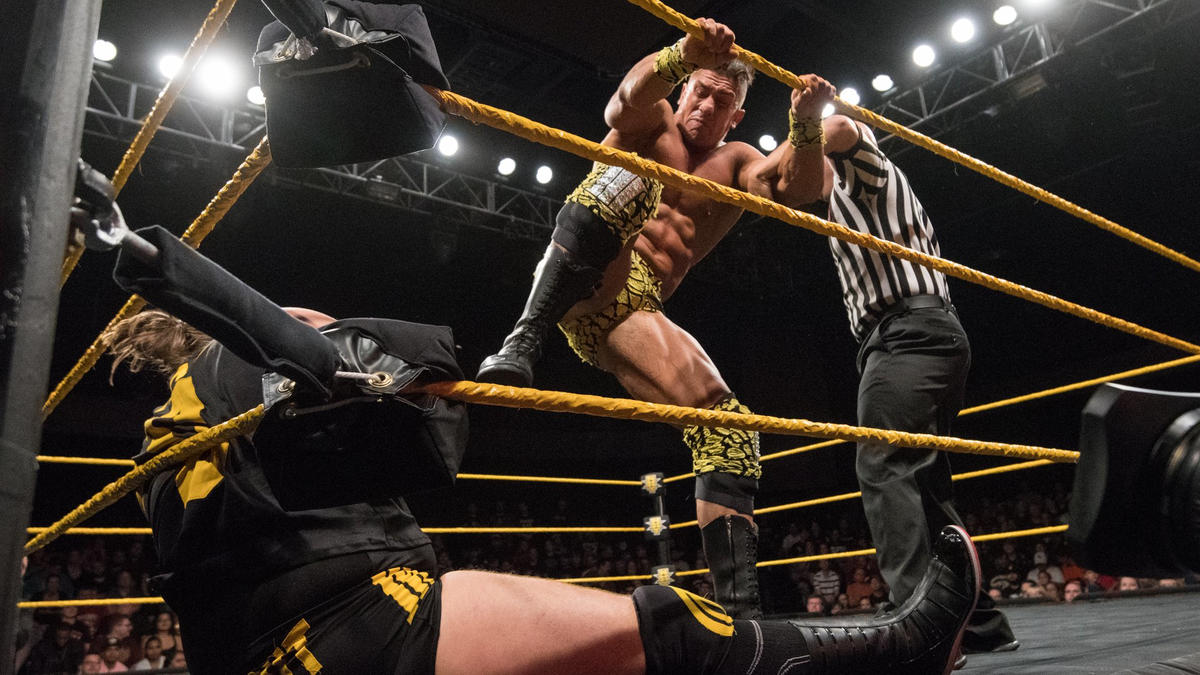 Agressive start as both men shove each other and Ohno punches EC3 right in the face. EC3 goes to regroup on the outside but Ohno follows him out there and lands a series of chops before putting him back in the ring. More chops from Ohno. Bodyslam and then tries a senton splash but EC3 got the knees up. EC3 on offense now in the corner and uses the 5 count to his advantage. EC3 continues to wear down Ohno but Ohno eventually catches a kick and plants a knee in EC3’s face. Two big forearm shots and then a cyclone kick, followed by two big senton splashes. EC3 has to roll to the outside again but Ohno just follows him out and lands a 3rd senton splash on the floor. They get back in the ring and EC3 manages to hang Ohno up on the top rope, which leads to EC3 getting him up for the One Percenter for the win.

K-Tank’s Take: I just don’t know that beating Ohno means anything. He’s basically their top jobber. Can anyone remember a match he’s won against a marquee opponent? The only one I can think of is Hideo Itami when he was on his way to the main roster. EC3 should’ve been on Takeover in some fashion. Still don’t know if they’re going heel or face with him, but he’s a star regardless. 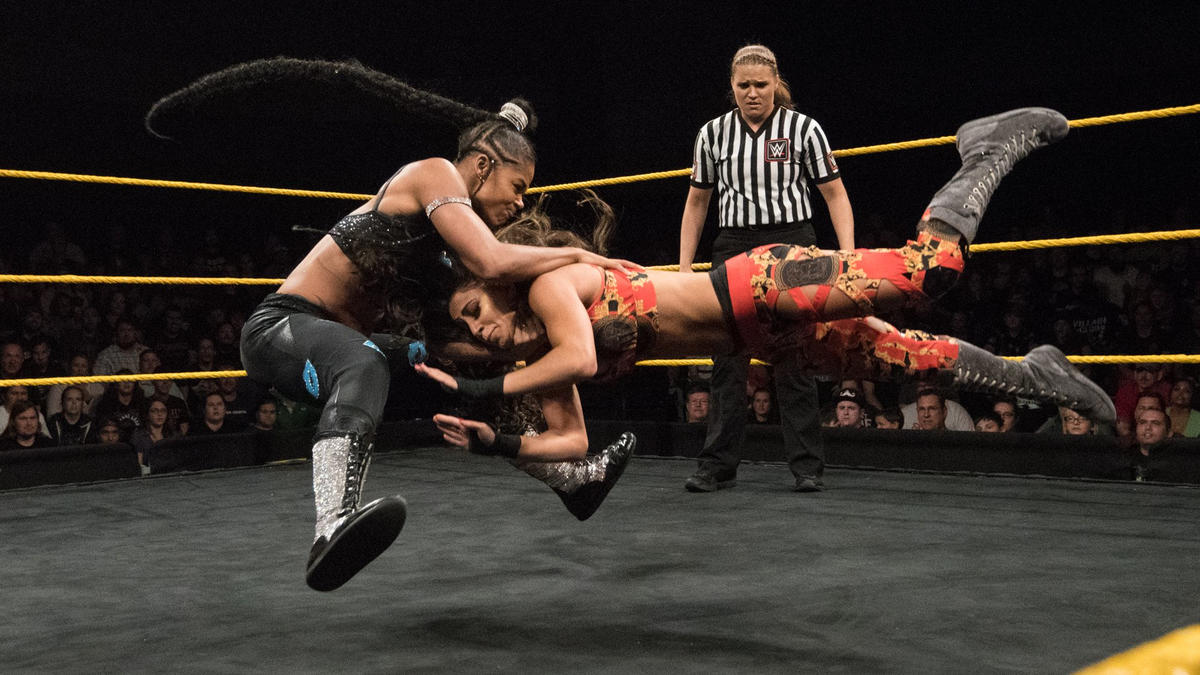 Shoutout to Belair for wearing the Carolina Panthers blue lipstick to match the same blue in her outfit. Belair drops Aliyah with a big forearm immediately. Follows that with a shoulder tackle. She leapfrogs over Aliyah in the corner and comes back with a huge shoulder into the midsection. She goes for a vertical suplex but Aliyah gets out and turns it into a front choke. Belair switches her positioning and lands a snap suplex to get out of it. A standing frog splash by Belair and then she proceeds to clean and jerk Aliyah over her head before delivering Snake Eyes into the top turnbuckle. Belair gets Aliyah up in a torture rack and flips her over for a sitout reverse Death Valley Driver for the win.

K-Tank’s Take: Man, how can you not be impressed with Bianca? She has unlimited potential. That clean and jerk spot is just tremendous. The crowd was REALLY into her and with her moveset, it’s hard to boo her. She’s trying to stay a heel though so we’ll see how long that lasts.

We now get a video package for Shayna Baszler and Nikki Cross at Takeover. Another well done package as Nikki burns a Queen of Spades playing card at the end.

We now go to Dakota Kai backstage who is asked about what she would change from her loss to Baszler for the NXT Women’s title recently. She says she came really close and if she had another, she’d win the title this time. Bianca Belair comes in and questions why Dakota is being questioned after what she just did in the ring. Belair says she is the EST of NXT and Dakota isn’t gonna do anything except fail like she did against Baszler. Dakota challenges her to a match next week and Belair says she likes that, but Dakota won’t. Really strong promo from Belair. 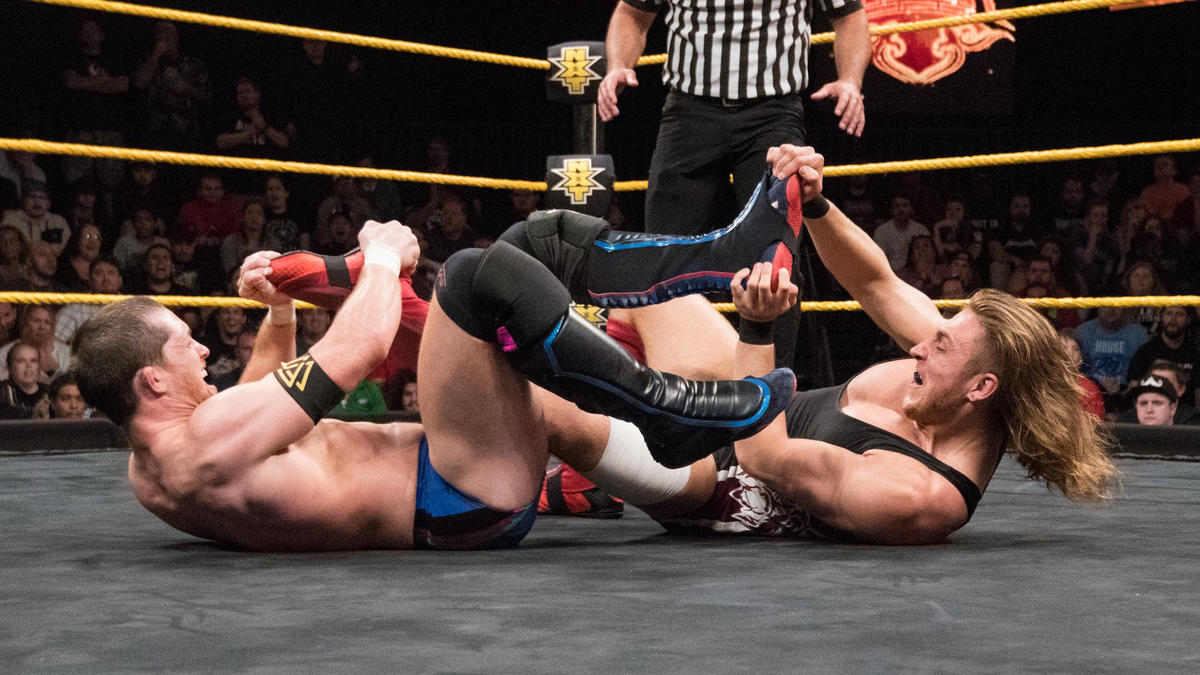 The crowd is red hot for this one, solidly behind Dunne. Both men show tremendous grappling skills to begin with, as to be expected. Multiple reversals by both men. Dunne cartwheels over a seated O’Reilly and then grabs the arm to start the joint manipulations. Dunne focusing on the left arm. O’Reilly ends up running right into a hard clothesline from Dunne and then both men go to the floor. Dunne with a release suplex on the apron as O’Reilly lands hard. They get back in the ring and Dunne starts to surfboard O’Reilly but instead just pokes and prods at the ears, arm, and mouth of O’Reilly. Dunne tries to scale the turnbuckles but O’Reilly kicks out the leg from under Dunne and he falls hard to the mat. Dunne has the left quad area taped up and that’s what O’Reilly is focused on. Back suplex by O’Reilly and then goes a submission on the leg. Both men get up and they trade slaps for kicks until Dunne hits a step up enziguri. Dunne fires off with a flurry of punches. O’Reilly tries a release German suplex but Dunne lands on his feet, kicks O’Reilly and then lands a sitout powerbomb. Pin attempt but O’Reilly turns it into a triangle choke attempt. Dunne wrapped around O’Reilly and tries a Kimura lock but O’Reilly gets out. Penalty Kick by O’Reilly, followed up by a brainbuster, but Dunne kicks out of a pin. O’Reilly with a series of kicks to Dunne and Dunne fights them all off to finally knock O’Reilly down with a forearm smash. Dunne tries The Bitter End but O’Reilly turns it into a front choke in mid air. Dunne then turns that choke into a X Plex, but O’Reilly recovers quickly to grab Dunne in a ankle lock. Dunne gets out of that and both men knock each other out going for a headbutt. Both men just unloading on each other now as they get up. O’Reilly misses a kick, Dunne misses a dropkick. O’Reilly with a stomp, Dunne right back with an enziguri. O’Reilly right back with a jumping knee strike. Dunne with a massive right hand and both men are down again. Insanity!!

Both men try to get up and O’Reilly lays in the forearm smashes. Dunne won’t let go of O’Reilly’s hand though. O’Reilly pulls Dunne’s mouthpiece out of his mouth and Dunne comes back with with a finger dislocation, followed by Bitter End and that gets the win! That went about 1o minutes.

Immediately after the match, here comes Cole and Strong to attack Dunne. Right after them is Lorcan and Burch. It’s chaos in the ring as Dunne and Cole fight to the backstage area and it’s left to the two tag teams. Lorcan and Burch dump the champs to the floor and are left standing tall.

K-Tank’s Take: That was a ton of fun to watch! I would love to see these guys get 5-10 more minutes and put on an absolute classic. Their styles just work really well with each other. It’s odd that last year in Chicago is when Dunne had his breakout match against Bate and now he’s not on the card. It just shows to the stacked level NXT is at right now, but he’s obviously doing just fine as champion and as a newly formed babyface. 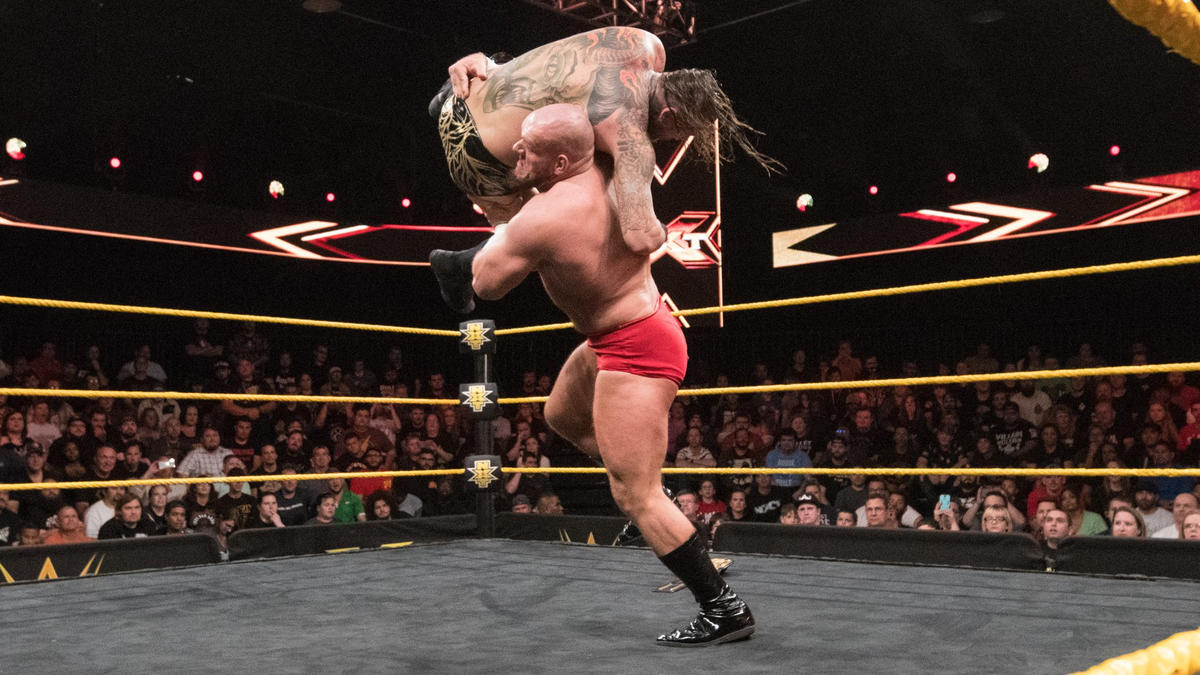 The NXT Champion, Aleister Black comes out to finish our show. He’s in his ring gear. He says that Lars Sullivan thinks he’s got Black’s number just because he caught the Black Mass strike. It may have caught Black by surprise, but Sullivan will still feel the Black Mass in Chicago. Sullivan’s carnage isn’t imminent because he will simply fade to black. Cue Sullivan’s music and Black gets ready for a fight as Sullivan charges the ring. Sullivan ends up taking Black out with a massive lariat and then right away goes for the Freak Accident. Lars says he’s not through and there’s a second Freak Accident. Black is out cold and Lars picks him up and drops him with a 3rd Freak Accident. Lars still isn’t done and now he’s carrying Black out of the ring and takes the title with him. Lars ends up dumping the champ on the announce table and tells him that he will be the one that fades to black. Lars stands over Black on the table with the title raised high. Lars says this is Black’s reality in Chicago as his music begins playing and our show comes to an end.

K-Tank’s Take: Well that’s about as definitive a statement that you can make for Black retaining on Saturday. It makes the finish too predictable in my opinion. I know you’ve got to make Lars look like a monster and credible foe to take the title, but as I put in my preview, I don’t know that Lars was ready for the title shot anyways.

That’s it for this week. They announced that Bianca Belair vs. Dakota Kai and War Raiders vs. The Mighty will take place next week, so Adam Cole won’t wrestle in Chicago, which is mindblowing to me. Be sure to check out our preview piece, John will have your live coverage of Takeover, and I’ll have all the follow up after that. Until next time, don’t do anything I wouldn’t do, but if you do… name it after me!