Welcome one and all to another installment of the NXT Spotlight here at TJRWrestling. With just two episodes left of NXT before we go to Takeover XXV, we still only have two matches officially set. I would suspect this week’s episode will fill in the blanks for us, so let’s get right to it!

We start inside William Regal’s office, who talks about how we’re left without tag team champions after last week. There are many deserving teams in NXT and he thinks he’s come up with a solution for the division. He’s going to take the tag titles and put them above the ring, and Street Profits, Undisputed Era, Forgotten Sons, & Lorcan and Burch will compete for them in a Ladder Match! 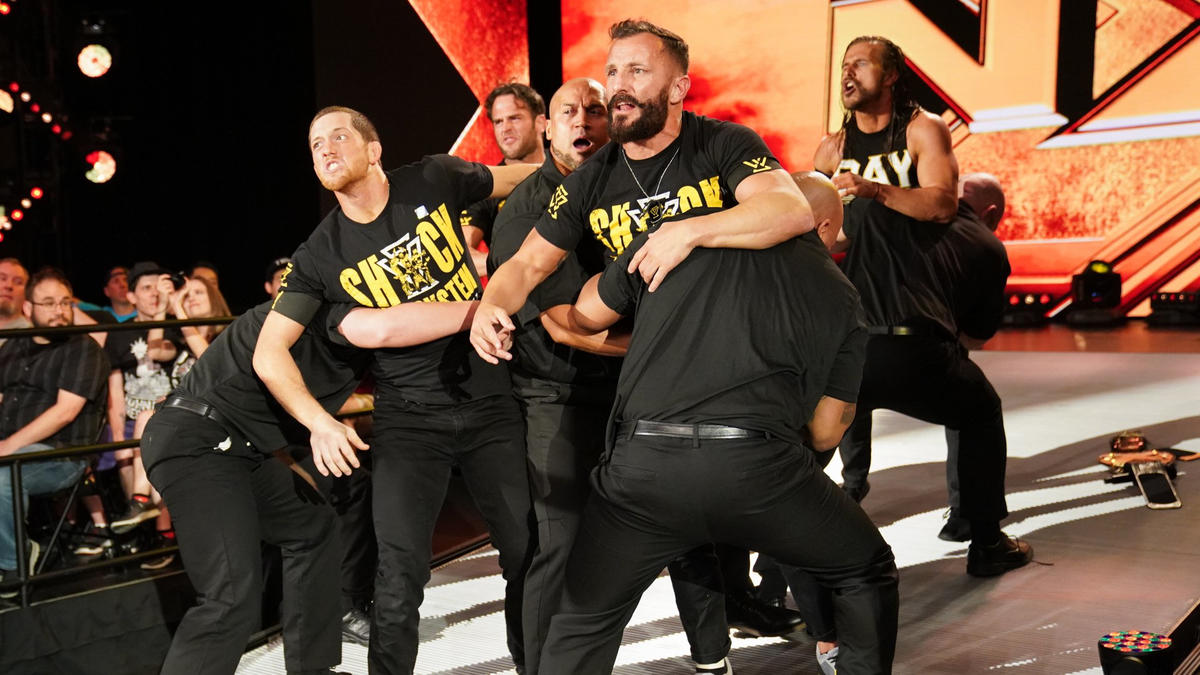 The Undisputed Era Is Together

That cues up Johnny Wrestling’s music and here comes the champ. Gargano says he wants something from Cole, he wants Cole to tell the truth for the first time. The reason he’s got his boys back together is because he knows he can’t beat Gargano on his own. Cole asks what kind of idiot Gargano is. Cole reminds him that he won the first fall in New York. Gargano says that Cole calls him an idiot, but can Cole do math? He clearly didn’t shock the school system growing up. In a 2 out of 3 falls match, he has to win 2 falls. Cole only won one. Gargano won two falls. That’s why he’s the NXT champion. Cole tells him to shut up. He can be as condescending as he wants, but he knows it eats Gargano alive that Cole pinned him in New York. In two weeks, he’s going to do it again. As for tonight…

Matt Riddle comes from behind the Era and he attacks them all. Gargano decides to join the fray and the two of them clear the ring. All the refs come into the ring to separate the two groups.

K-Tank’s Take: The “shock the school system” line from Gargano was pretty funny. Nothing we haven’t heard from these two otherwise though. Hopefully this ends any potential for the Era breaking up anytime soon. 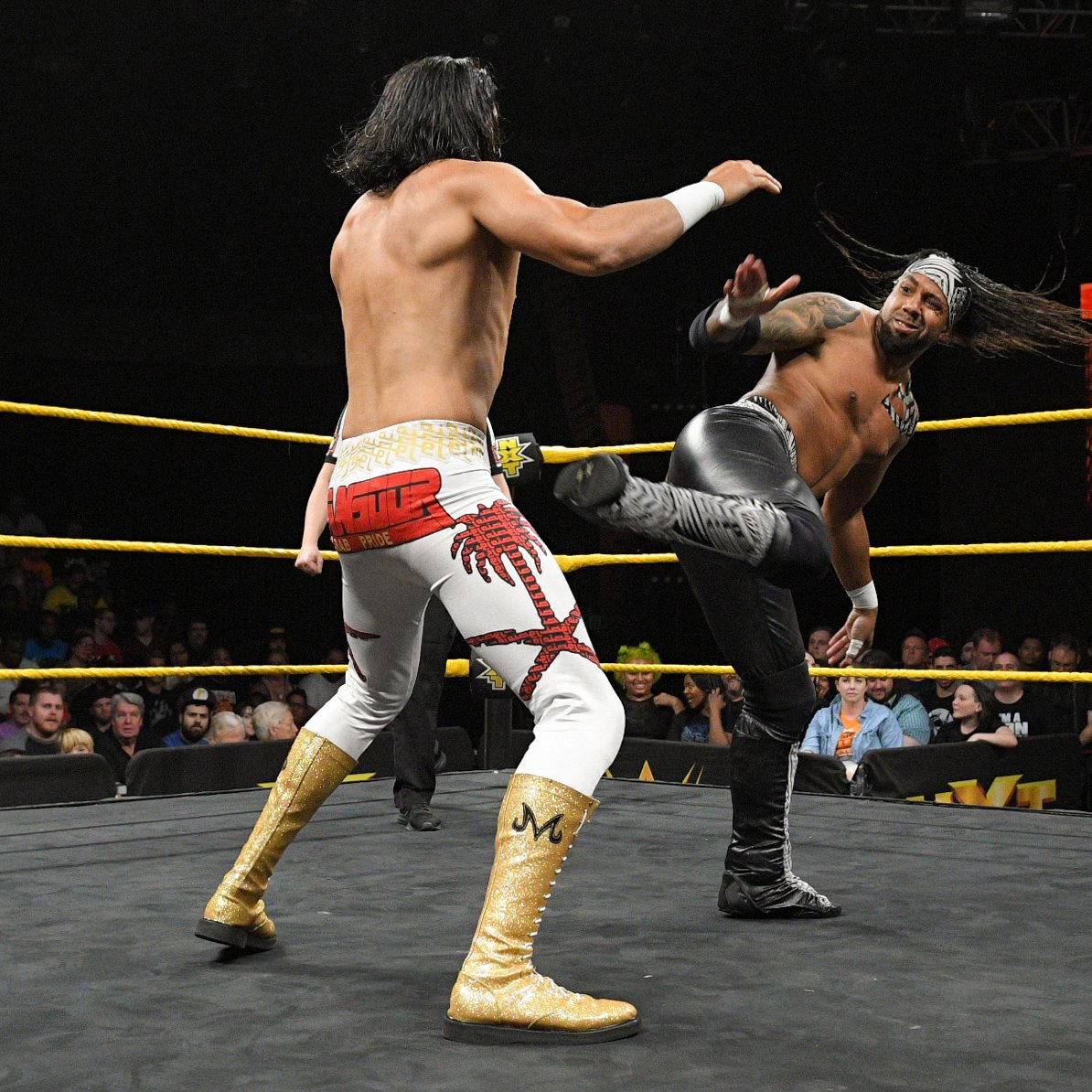 K-Tank’s Take: I don’t know if they’re going to potentially push Mansoor, but this was just a random match. Not much to say.

We go to Cathy Kelley outside Regal’s office, where the Undisputed Era come out angrily. He’s asked about what happened at the beginning of the show. He says the way the Era has conducted themselves over the last two week, that’s not how they do things in NXT. Because of it, Roderick Strong will take on Matt Riddle at Takeover. Also, tonight’s main event will be Gargano and Riddle vs. O’Reilly and Fish. 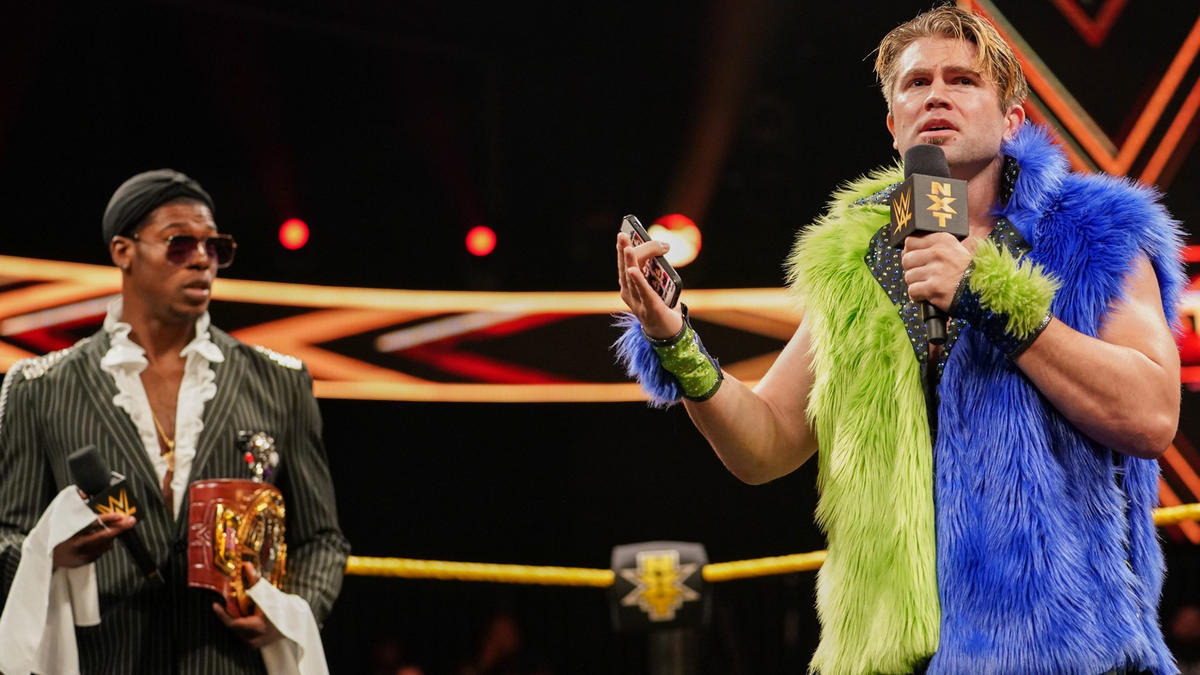 Dream is a Breeze

All of the sudden, Tyler Breeze’s music hits and Prince Pretty has come out to a HUGE ovation. He’s got a new shorter hair cut, but he has his original phone case, which is a nice touch. A big “welcome home” chant as he begins to speak, which he says, “Prince Pretty is home.” Much like Dream, when he was in NXT, he had everyone talking about him. Ever since the Fashion left NXT, it feels lifeless and dull. There’s wannabe impersonators, cheap knockoffs, and although that’s flattering, there can only be one Prince Pretty Tyler Breeze.

Dream says to allow him to welcome Breeze back to NXT. They do something a little differently in NXT now. The spotlight of NXT wants a real man in it now. Not a boy. Especially not a boy who plays Cops & Robbers. Just because he couldn’t cut it on Mondays and Tuesdays, doesn’t mean he can come back to NXT and demand a spotlight. Breeze says let’s not confused “couldn’t cut it” to “uninspired.” Dream inspires him. The North American Title inspires him. An inspired Tyler Breeze is too much and too big for Dream to handle.

Dream calls Breeze a dollar store detective. Maybe he forgot sitting in catering on Mondays and Tuesdays, but they do things differently in Dream’s NXT. The line starts outside the building. The Dream doesn’t want to start things off badly with Breeze, so how about a selfie with the Champ? Breeze laughs and asks if he should take a selfie with the champ? It’s a monumental moment. He decides to do the selfie and as they get set up, he says he has one last piece of advice for Dream. When he puts his number on his tights and no one calls, that means no one is interested. Dream is incredulous and that leads Breeze a chance to punch him in the face and leave him laying.

After a commercial break, Cathy Kelley catches Breeze outside the arena and asks his motivation for doing what he just did. He says he’s an NXT OG. All he wanted to do was introduce Dream to an inspired Prince Pretty.

K-Tank’s Take: Man is it good to see Tyler Breeze back in NXT! I gather this is a semi-permanent thing, as we’ve seen in the past some main roster guys come down that have nothing on the main roster. He fits perfectly on the brand and clearly none of the tarnish from his main roster run carries over back to NXT. The crowd loved to see him. He is one of the true NXT pioneers and was treated as such. Breezango had some fun moments, but he was a can’t miss prospect coming out of NXT and he just became another person they didn’t do right by in the main roster. This was a VERY good segment with some fun lines by both men. The match for Takeover is official now and should be a highly entertaining match. Hopefully this feud gets more than two weeks and there’s more to come after Takeover. 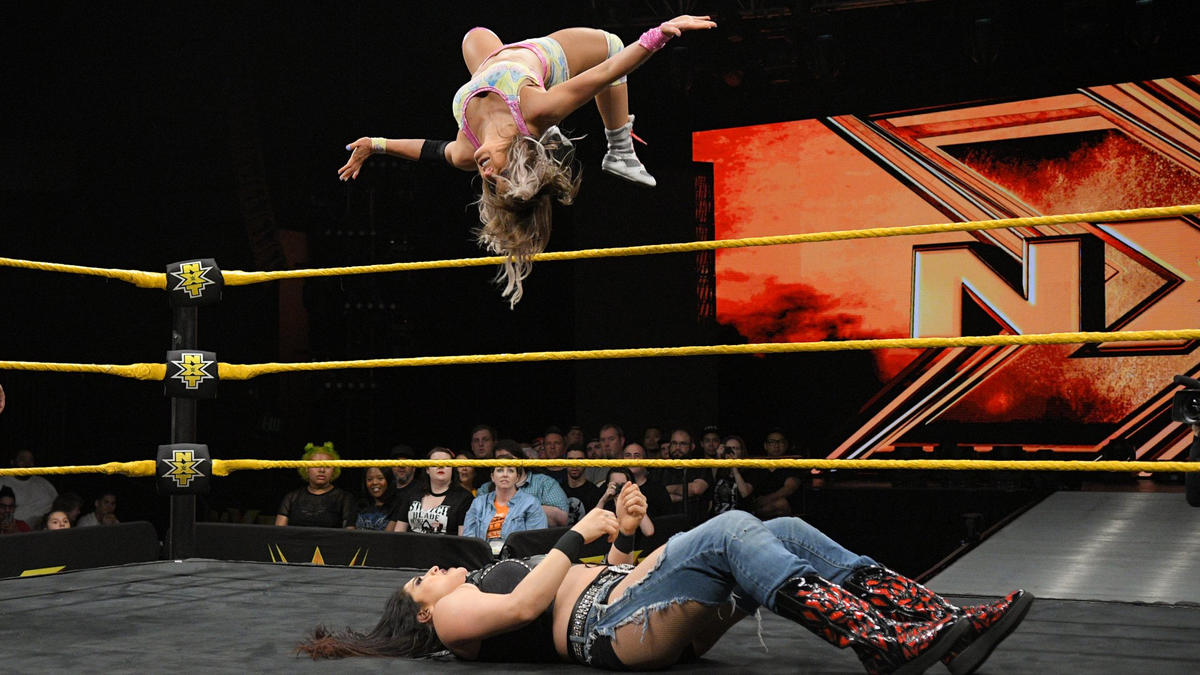 Reina with a big size advantage in this one. Candice fighting from underneath to start. Spinning powerslam by Reina but Candice kicks out. Candice sidesteps Reina in the corner and then does a Codebreaker on Reina’s arm. Reina tries another spinning powerslam, but this time Candice escapes and ends up school boying Reina to the outside. Baseball slide by Candice and then a springboard crossbody to the floor but Reina catches her. Candice escapes and sends Reina into the steel steps. Back in the ring and Candice comes off the top rope with a hurricanrana. Candice with a splash in the corner and then goes back to the top rope with a missile dropkick. Candice with a Lionsault that she doesn’t catch much of, but still enough for the pin.

Post match, the Horsewomen come out and surround Candice. She tries to strike first, but it’s a 3 on 1 attack. Here comes Io Sharai with a kendo stick. Io is absolutely unloading on all three women. She ends up breaking it over Baszler before she gets pulled to safety.

K-Tank’s Take: Good showing by Io with the kendo stick. She was really laying them in. Not much to say about the actual match. If Shayna somehow gets by Io at Takeover, perhaps Candice will be her next challenger. But I think Io will win.

Next week it’ll be the rematch between Mia Yim and Bianca Belair along with KUSHIDA taking on Drew Gulak. 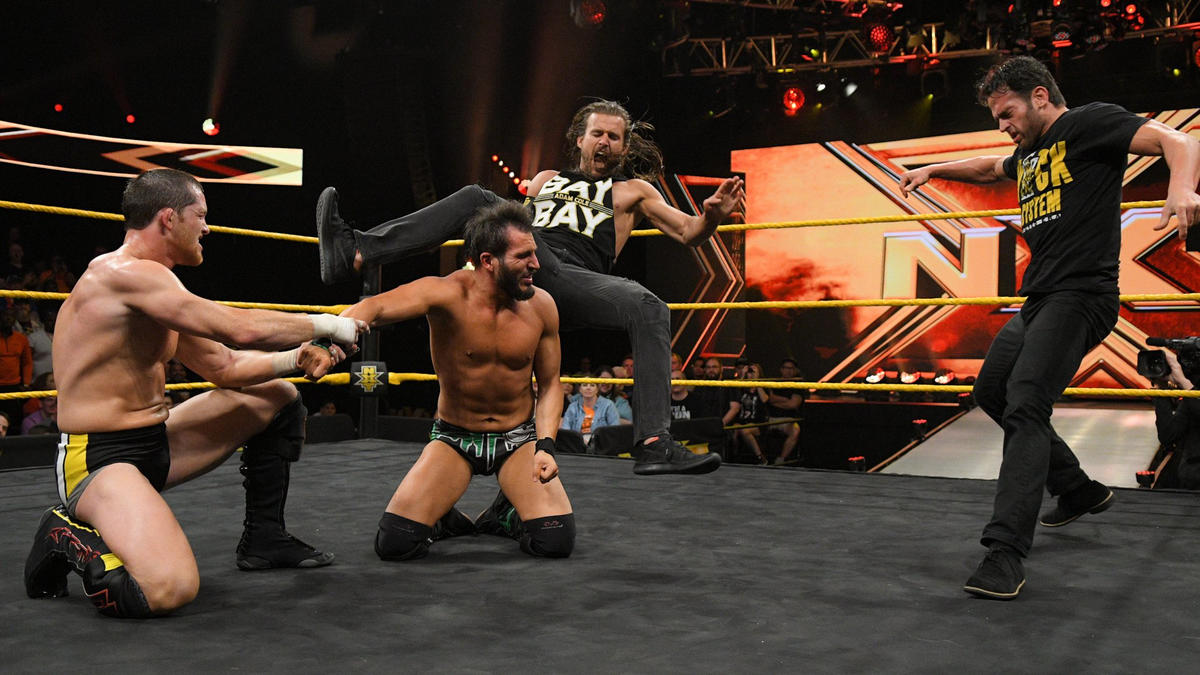 15 minutes left in the show as the bell rings, so this could be a very good main event. Cole and Roddy are not out at ringside. Riddle has kinetic tape on both sides of his ribs. Gargano and O’Reilly start us off. Great chain wrestling to start as you’d expect. O’Reilly gets a triangle choke, but Gargano reverses it into a Gargano Escape. O’Reilly escapes that and tags in Fish. Fish tries a cheap shot on Riddle, but Riddle moves out of the way. O’Reilly then tries to sneak up on Riddle, but Riddle kicks him in the face. Fish ends up taking out Riddle anyways, but then Gargano superkicks Fish from the apron. He throws Fish in the ring and tags in Riddle officially.

Riddle with repeated open hand strikes to Fish. YES kicks in the corner and then Riddle with a series of flying forearms. Exploder suplex out of the corner by Riddle. O’Reilly tries to come in and gets an overhead kick for his troubles. A trio of Gutwrench suplexes by Riddle and then O’Reilly comes in the ring and gets one of his own. Riddle’s ribs start acting up and that gives Fish an opening. O’Reilly tags in legally and they work over Riddle in their corner. O’Reilly with repeated knee strikes to the injured ribs.

Fish tags in and they hit a double team snap suplex for a two count. Fish with a slingshot senton splash on Riddle for another two count. O’Reilly back in and has a seated abdominal stretch. Riddle escapes and both men counter each other until Riddle lands a jumping knee strike that allows him to tag in Gargano. Gargano taking on both opponents. Overhead belly to belly throw on O’Reilly. Clothesline/Bulldog combo on both men. Tornado DDT on Fish for a two count.

O’Reilly makes a blind tag and they hit Chasing the Dragon, but Gargano kicks out. That was a great finisher in ROH. Fish back in and they go for Total Elimination, but he kicks both men to avoid it. Riddle is in and gets German suplexed by O’Reilly, but he pops right back up and hits one of his own. Big kick by Riddle and all four men are down. Riddle ends up making a blind tag of his own and Gargano and he do a double team superkick and senton splash. Riddle to the top rope and hits the Floating Bro, but O’Reilly breaks up the pin.

O’Reilly gets kicked in the head and then Gargano lawn darts him into Riddle’s flying knee. Fish back in and Riddle catches a kick and turns it into a powerbomb. Big knee strike by Riddle but O’Reilly pulls Fish out to break the pin. Penalty kick by Riddle on the apron and now here comes Adam Cole. Gargano sees him and dives through the ropes to take him out. Here comes Roddy though from the other side and takes out Riddle. Backbreaker on the apron and he throws Riddle in the ring, which sets up Total Elimination and they pin Riddle for the win.

Post match it becomes the 4 on 2 beatdown you’d expect. They hold up Gargano so Cole can hit the Last Shot from behind. The Era stands tall over Gargano as the show comes to an end.

K-Tank’s Take: Very good match. Watching Riddle in this match, it’s so obvious how physical his match with Roddy will be at Takeover. I know there’s a ladder match now, but these two could legitimately steal the show with their styles. At the very least, it’ll probably be the hardest hitting match we see under a WWE/NXT banner all year. I really enjoyed seeing The Undisputed Era back strong. There’s a lot left with that group and I thought any talk of breaking them up was premature. Obviously, it could still happen after Takeover depending on how the results play out for them, but I hope not.

That’s it for this week. I will be gone next week and for Takeover 25 as I will be at a Family Reunion all week, but I’ll have a Takeover Preview for you guys before I leave and John will have you covered for Takeover. So until next time… don’t do anything I wouldn’t do, but if you do, name it after me!