Welcome one and all to another installment of the NXT Spotlight here at TJRWrestling. We are about a month out from our next Takeover event in Chicago, and even though no matches are signed, some feuds that are likely to play out there have come to fruition. With all the talent in NXT, there is no such thing as a bad show anymore and this week’s episode is no different. Let’s get to it! 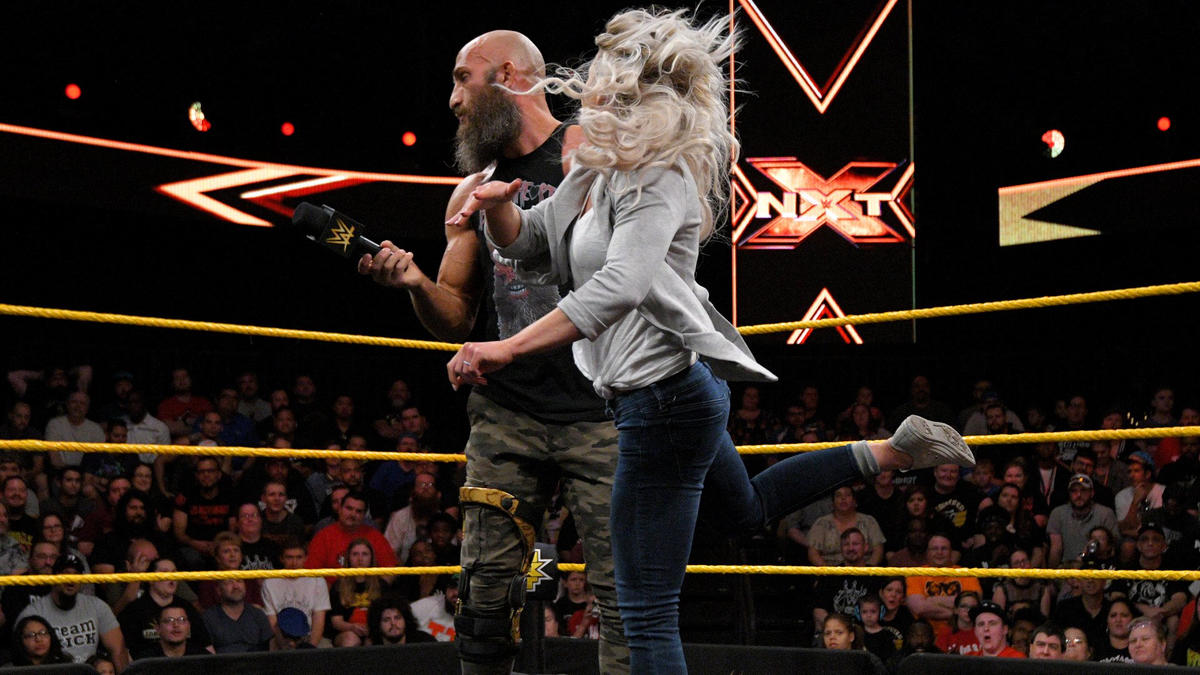 Johnny Wrestling’s music hits to start our show, but unfortunately Tommaso Ciampa comes out instead. Ciampa has a mic as he walks down and says that everyone says Gargano won at Takeover. He may have won the battle, but Ciampa will ALWAYS win the war and that’s why Gargano is in a neckbrace right now. Piece by piece, he has broken Gargano. He broke his heart, his mind, his spirit, and now his body. Johnny Wrestling is gone, Ciampa wins. With that, here comes Candice LaRae down the ramp and into the ring. She steals the mic from Ciampa and asks who is he? She used to think she knew Tommaso but she doesn’t recognize what he’s become. He’s obsessed with ruining the Gargano’s lives and she doesn’t know why. The only thing truly broken is him. Ciampa mocks crying as Candice says she’s done shedding tears for Ciampa’s cruelty. She’s tired of wondering of what happened to the man she considered family. He is a monster that she will never forgive. And even if Johnny never comes back, Ciampa will always know that Johnny was better than him. With that, she drops the mic at Ciampa’s feet.

Ciampa picks it up and says maybe. But she knows and he knows, that boy that she calls a husband isn’t half the man Ciampa is. That’s why his wife came out here instead of Johnny himself to confront Ciampa. He lived with Johnny and Candice for two years and he’s always known she’s more of a man than Johnny is. The crowd chants “mess him up Candice, mess him up” and Ciampa mocks her to do it. Ciampa has always wondered how she could marry such a big… and before he finishes, Candice slaps him and the mic out of his hand. Ciampa just smiles and and waves goodbye as he leaves the ring. She storms out and to the back as Ciampa tells her he wins.

K-Tank’s Take: Great promo by both participants. It’s a no brainer that we’ll have a rematch at the next Takeover, the question is what type of match they’ll have after the last one being unsanctioned. 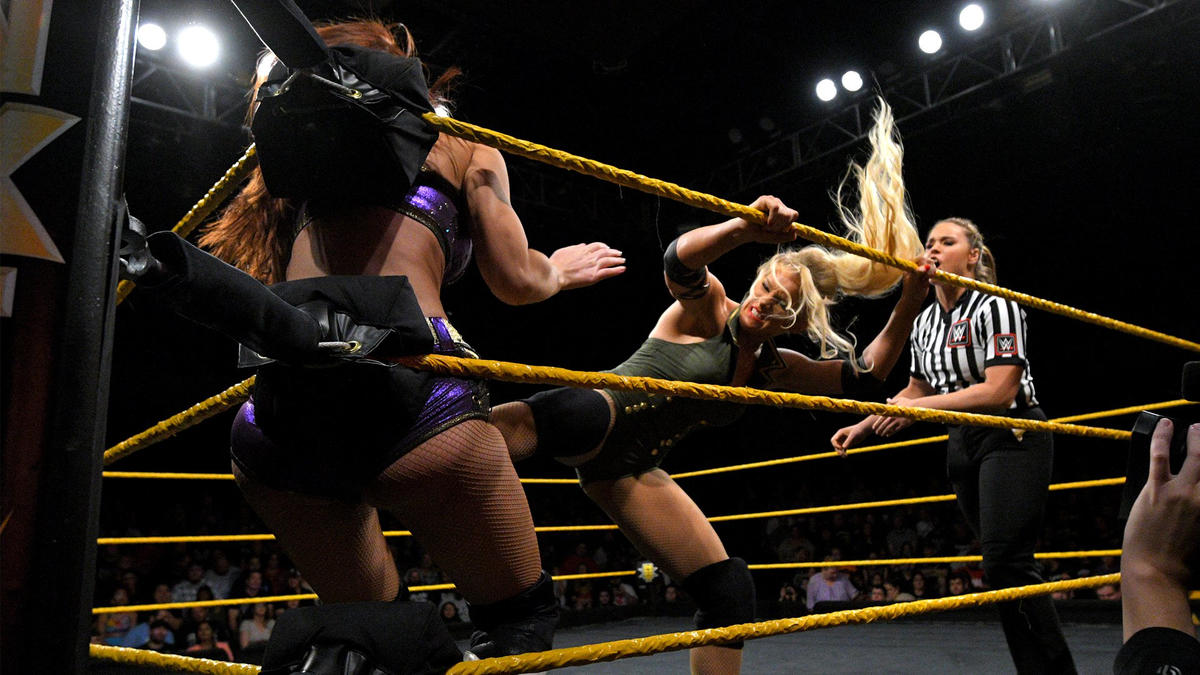 Lacey got new theme music and ring attire. More towards her military roots now. Lacey goes right after Brandi and stomps away at her in the corner. She then does a propelled bronco buster. She gets on the apron and comes back in with a nice looking slingshot elbow drop. She then goes to the second rope and hits a just as nice looking moonsault. That’s not enough though as she picks Brandi up and lays her out with a right hand. That picks up the win.

Post match, Lacey is headed up the stage and here comes Kairi Sane to attack her. Kairi has a new hairdo and she attacks Lacey back into the ring and tries to set up for the InSane elbow drop, but Lacey rolls out of the ring and goes to higher ground.

K-Tank’s Take: Odd that Lacey got a makeover of sorts as I really thought she had come into her own finally. She’s gotten a lot better and far more confident. Still seems odd that Kairi is nowhere near the title picture.

We get a recap of the confrontation between Ricochet and Velveteen Dream last week which leads to the match we’ll have between the two this week. We then go to Aleister Black from “earlier tonight” who is asked about both men wanting a shot at his title. He’s learned that he’s got a bigger target on his back after becoming champion. If it’s him and Dream, everyone knows the history they have. If it’s Ricochet, they better call him the one and only for a reason. Either way, they better know that if they get in the ring with him, THEY are the target.

We go to “earlier today” where Dakota Kai is with the media again until Nikki Cross shows up and runs everyone off. She has a phone and holds it up to Dakota’s face and wants to know when she’ll fight Shayna. Dakota can’t answer her and Nikki says with fear comes opportunity. She grabs Dakota and tells her to face her fears and fight! Nikki then does her maniacal laugh and walks off. 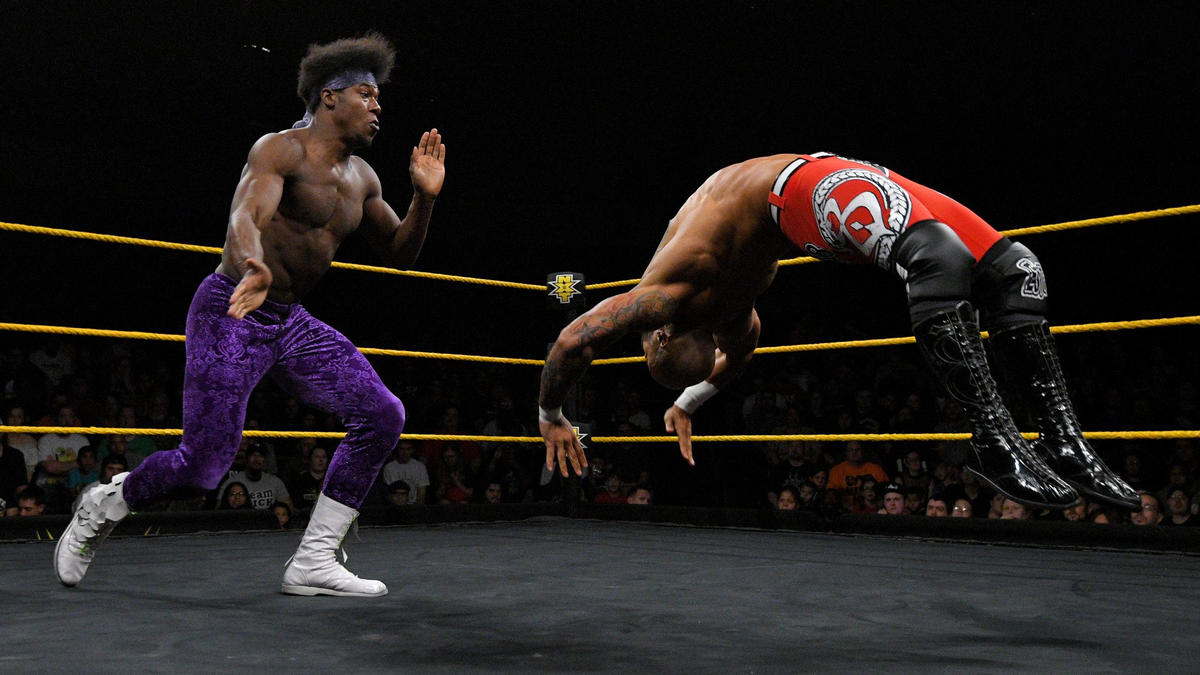 Ricochet vs. The Velveteen Dream

Dueling chants for both men right away. TVD with a wristlock that takes down Ricochet, but Ricochet gets right back up and reverses it. TVD turns it into a side headlock but Ricochet turns it to a headscissors. TVD gets back to the side headlock until Ricochet breaks out and starts working over the arm. Now it’s Ricochet with a side headlock of his own. Both men then show off their incredible athleticism with a sequence I couldn’t even keep up with. TVD ends up getting dropkicked off the apron and then Ricochet fakes a dive attempt and TVD slides into the ring and they come to a stalemate that gets a HUGE ovation. That was outstanding. They end up fighting in the corner and then after a reversal from Ricochet, they end up cracking heads. They both get up and start fighting again until the crowd starts booing and the reason being is because Lars Sullivan comes in the ring and destroys both men. He gives the Freak Accident to both men and stands tall, declaring that he is the next NXT title contender.

K-Tank’s Take: That 30 second sequence is all I needed to see to know we need A LOT more between these two. I’m going to a NXT live event this weekend and they’re the main event. I cannot wait to see what they do. Odd run-in by Lars, but they’re finding ways to keep him strong. 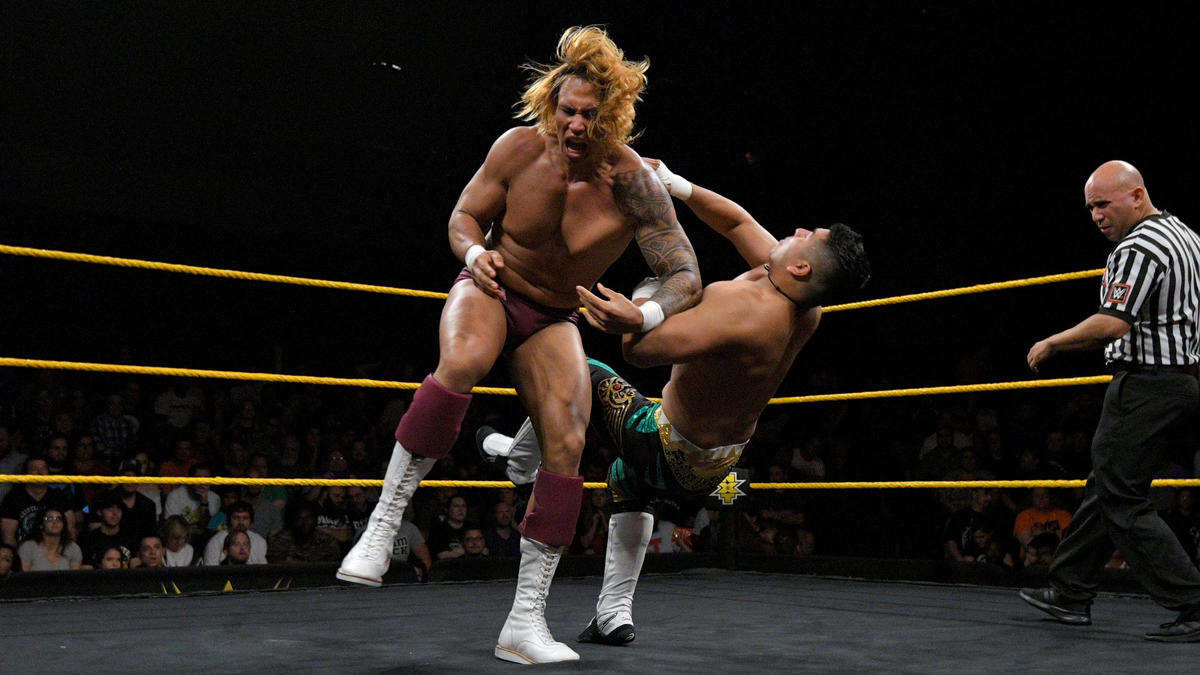 Reeves immediately goes to work on the left arm of Mendoza. Mendoza with a back elbow but Reeves just locks on a side headlock. Mendoza shoots him off but Reeves back with a shoulder tackle. Mendoza gets up and tries a headscissors takedown but Reeves reverses it and beats him down in the corner. He pulls Mendoza out and lands a vertical suplex. a Ted DiBiase like fist drop follows, then he goes to the second rope and does his trust fall elbow drop. Now he locks on a cobra clutch. Mendoza connects with a jawbreaker to break it and then starts to fight back. He comes off the ropes with a step up enziguri and then a flying forearm in the corner. He ends up on the apron and lands another enziguri. He tries to springboard but Reeves catches him with a big boot in mid air. Reeves gets Mendoza up and lands his Hawaiian Drop for the win.

We go to Cathy Kelly outside of William Regal’s office wanting to hear something about what happened during the Ricochet/TVD match. Both men show up at the door of Regal’s office and they both agree they have something in common in wanting Lars Sullivan. Ricochet holds the door open for TVD as they both go into the office.

We go to “earlier today” where Heavy Machinery is in the PC. They’re talking about “bulking season” until TM61 shows up. Heavy Machinery calls them cheaters and TM61 says it doesn’t matter how you get there, all that matters is the sweet taste of victory. Which is the only thing Heavy Machinery probably hasn’t tasted in a while. Heavy Machinery challenges them to a fight next week and TM61 accepts. 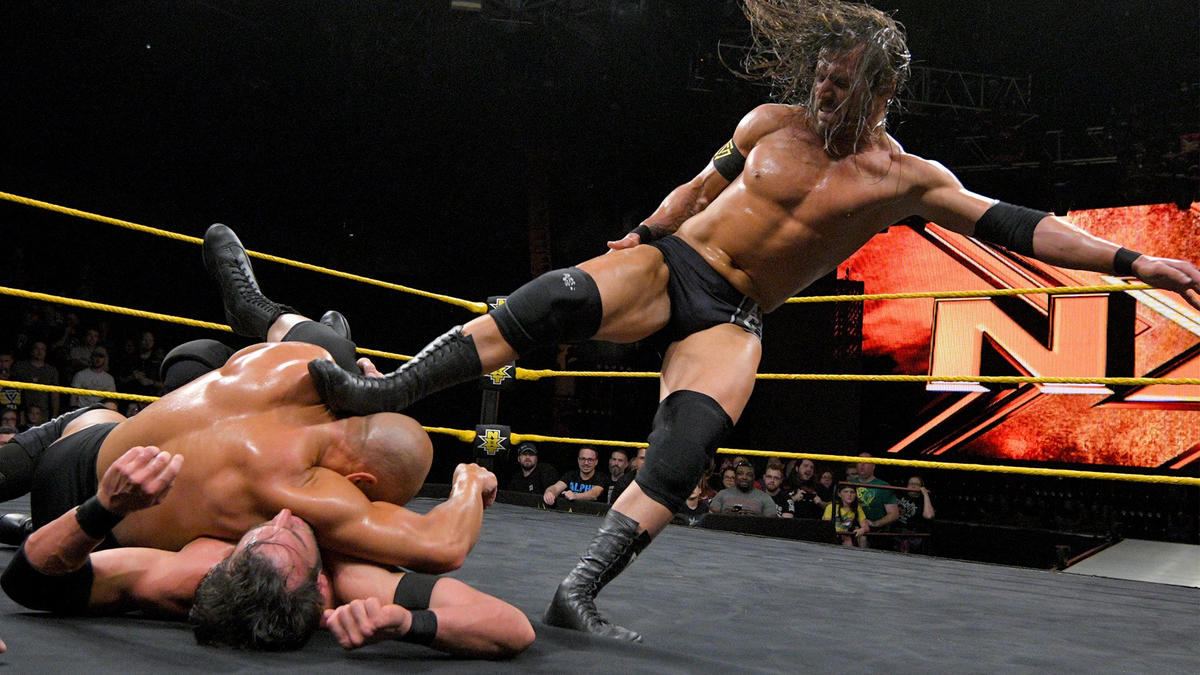 13 minutes left in the show as the match begins. Roddy and Dunne look to start as Roddy throws his shirt in Dunne’s face but then tags in O’Reilly. Dunne decides to tag in Burch and now we start. Great back and forth until O’Reilly hooks a leg lock that makes Burch go for the ropes. O’Reilly lands some kicks to the leg of Burch and manages to tag in Cole. Cole calls Burch a joke as he attacks him with punches and kicks. O’Reilly tags back in and gives a headbutt to the ribs of Burch. Big kick to the spine and then Roddy is in the match now. Immediately to one of his backbreakers. Roddy then taunts Dunne with a stomp to the arm/elbow of Burch, just like Dunne is known for. Roddy showboats a little too much and this allows Burch to grab him and tag in Dunne. Dunne is all over Roddy now. He yanks Roddy’s arm back and punches him in the ribs before going to the finger manipulation. Cole and O’Reilly come into the ring to help him but Lorcan and Burch are in to even the sides and all three babyfaces wishbone the fingers of Undisputed Era. They go to the floor to regroup. O’Reilly and Cole manages to distract Dunne until Roddy comes from behind and gets the advantage. He wastes no time in tagging in Cole. Quick tags by the Era as they beat Dunne down in their corner.

Cole is in the ring with some knees to the spine and Dunne comes back with a forearm, but Cole lands a big boot. O’Reilly tags in after that and more of the onslaught. Stiff knees to the torso of Dunne. Now it’s Roddy’s turn. Dunne does everything he can to tag in Lorcan and finally gets him in. Lorcan is all over Roddy and O’Reilly. Awesome half and half suplex on Roddy and then Cole gets in the ring but is nailed with a running blockbuster. He tags Burch in and then dives over the top rope to take out the Era. He gets Roddy back in and they hit a double team atomic drop into a lariat. Burch with a pin but Cole breaks it up. Now it’s a free for all with all six men. Roddy throws Lorcan into Dunne, which leaves him with Burch. Big high knee in the corner and then Cole tags in to land his DVD over the knee. O’Reilly in with a sliding kick and goes for the pin but Burch kicks out. Cole and Roddy ends up dumped over the top rope and then Burch locks on a Crossface. Roddy comes in but he’s stopped by a Lorcan half crab. Cole now in and Dunne cuts him off with a mounted kimora lock. Roddy manages to power out of his submission which dominos into all the holds being broken. Dunne suplexes Cole over the top rope but on the way down, Cole hooks a neckbreaker over the top rope. The other four are in the ring and O’Reilly with a miscommunication on Roddy, which gets him taken out. Lorcan with a double running blockbuster. Lorcan now with a Wheelbarrow on O’Reilly and Burch lands a DDT in that position and they get the win! Adam Cole can’t believe it!

K-Tank’s Take: WHOO HOO!! I love seeing Lorcan and Burch getting a push finally. I’ve been praising these guys for months it feels like. This was a really fun match and makes me want to see more. Perhaps two title matches for Takeover come out of this? I’d love to see it stretched out that way.

Next week will be Lars Sullivan vs. Ricochet and Velveteen Dream in a handicap match. That’s it for this week, so until next time… don’t do anything I wouldn’t do, but if you do, name it after me.