Welcome one and all to another installment of the NXT Spotlight here at TJRWrestling. My apologies for missing last week, I had my wedding anniversary and mother’s day responsibilities at the end of the week and couldn’t get to it. However, we coming close to out next Takeover event, which will be the 25th Takeover already. Crazy to think about, but also really just feels like the start still. We have two title matches announced for the show already, Johnny Gargano and Adam Cole will have a rematch for the NXT Title, while Io Sharai will get her first 1 on 1 title opportunity against Shayna Baszler. Let’s see if this week adds any matches to the card!

Our show kicks off by saying that Percy Watson has decided to go into a new career and so replacing him is The Glamazon, Hall of Famer Beth Phoenix. Talk about an upgrade! 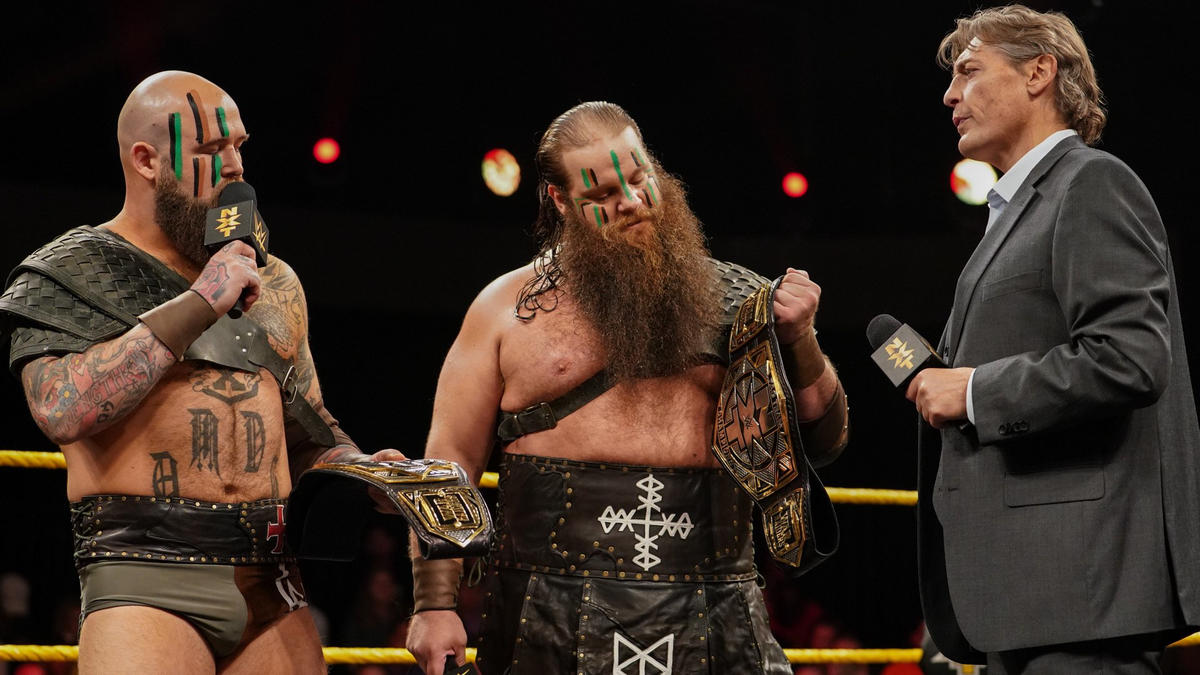 The NXT Tag Champs make their way to the ring with a statement to make. They say they have raided Monday Night Raw and brutalized the tag division. They’re far from done on Raw, but since they still have the NXT Tag Titles, they ask for William Regal to join them.

Regal makes his way to the ring. The Raiders say since they know there is no one that can take the titles from them, they’re here to relinquish them. They hand the titles to Regal. Regal says that’s a surprise and then the Street Profits music hits and they come out to a big ovation. The Profits question if the Raiders actually said no one. Everyone seems so scared of the big, bad Viking Raiders. But a few weeks ago, the Profits brought the fight to them. Even if the Profits didn’t win the match, the NXT Universe and the Raiders both realized something. The Street Profits CAN beat the Viking Raiders. The Raiders know it deep down. If of course, The Viking Raiders are their real names. Great line.

The champs take their titles back and tell Regal to make the match. We have a Tag Title Match tonight!

K-Tank’s Take: I know Full Sail isn’t the best indicator sometimes, but they were REALLY into The Street Profits here. Which is a really good sign. I’ve always been on board with them and so hopefully we’re in the midst for a true push for them. Next tag champions would be A-Ok by me.

We get a recap of last week where Adam Cole tapped out to Matt Riddle and the dissention between Cole and Roddy Strong continued. After the show ended, we get an exclusive video of them yelling at each other outside the arena. Cole calls Strong a “little bitch”. Cole says that maybe Strong doesn’t deserve to wear the band of the Undisputed Era.

Now we go to the lovely Cathy Kelley, who is with The Era, minus Strong. They’re asked for an update and Cole says he doesn’t know where Roddy is. But there’s never been a question of who the leader is. It’s Cole. There’s some commotion going on behind The Era and now Roddy ends up showing up, clearly after something physical. He tells Cole that they work better together and the Riddle problem has been solved. He hands Cole one of Riddle’s flip flops and there are drops of blood all over it. Cole smiles and hands Roddy his UE band back to wear. 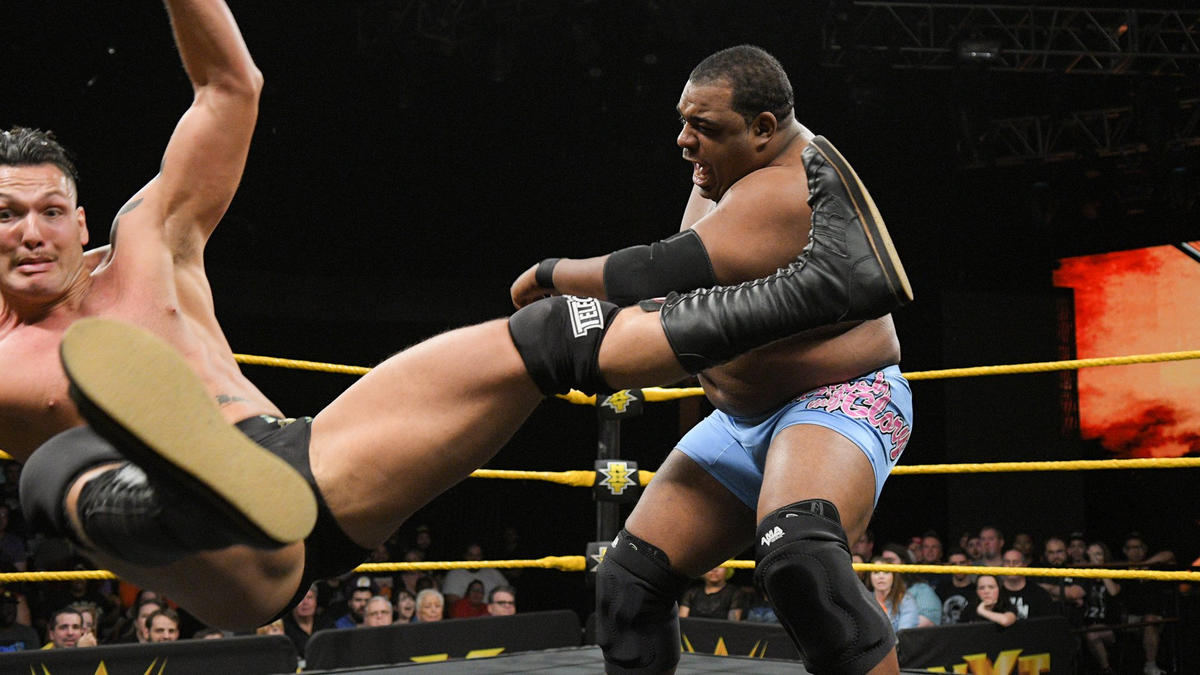 Mauro makes a point to say that Keith has been snakebit by injuries and that’s why we haven’t seen him. Also notes that “his rival” Dominic Dijakovic is now hurt with a torn meniscus. So they want to go back to that feud at some point it would seem. Not sure what Keith’s injuries were though as they were not reported on. I know he’s mentioned he’s had some family issues going on.

The crowd is clearly happy to see him again as they do a loud “Bask in his Glory” chant. Bononi charges Lee, Lee avoids him, nice leapfrog, and then a shoulder tackle. Lee gets Bononi in the corner and loud chop. Bononi manages to drop Lee into the ropes and then hits a jumping kick. He ties Lee up in the ropes for a bit and then drops him to one knee with a shoulder tackle of his own. Lee grabs his wrist and won’t let Bononi get any separation as much as Bononi tries. Lee fires up and lands a massive elbow strike in the corner. POOOOOOOUNCE on Bononi, followed by the Spirit Bomb for the decisive win.

K-Tank’s Take: GREAT to see Keith Lee back. I would assume they’re going to bide time with him until Dijakovic is back, but hopefully that feud is given it’s opportunity soon enough.

We see a video from the PC where The Horsewomen are doing a sparring session and Io Sharai shows up to attack Shayna Baszler from behind. They have to get pulled apart and then we get the announcement of the NXT Women’s Title Match for Takeover 25. The Forgotten Sons show up to Regal’s office and say they want to talk about The Street Profits being just handed a tag title match. Once again they’re being Forgotten but they’re going to remind everyone why they shouldn’t be forgotten. 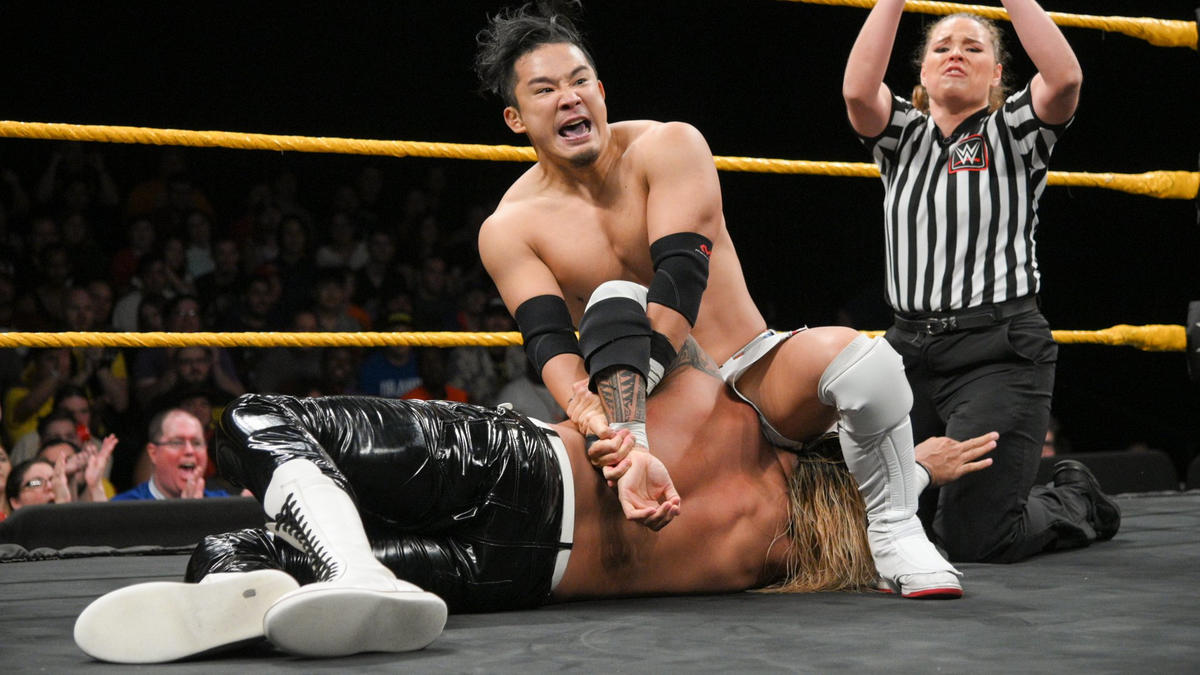 Reeves with a go behind takedown to start, as he shows off his size advantage. KUSHIDA comes back with a front face lock. Both men exchanging holds. KUSHIDA with a couple of arm drags. He has a hammerlock on as Drew Gulak shows up on the stage. He’s watching intently as KUSHIDA hits a hurricanrana. Reeves bodyslams KUSHIDA into the turnbuckles. Big knee by Reeves as KUSHIDA is in the ropes. Reeves with a suplex for a two count. KUSHIDA with an enziguri from the apron and then a springboard ax handle smash. Back handspring elbow from KUSHIDA. Hiptoss followed by a basement dropkick for a two count.

KUSHIDA tries to go for the Hoverboard Lock but Reeves escapes. Reeves goes to the ropes but KUSHIDA catches him with a handspring back kick. Reeves goes to the floor and KUSHIDA follows up with a somersault dive from the top rope to the floor. They get in the ring and this time KUSHIDA goes for the Hoverboard Lock and is successful. Reeves has to tap out.

Post match, Gulak has a little smirk on his face as he walks to the back.

K-Tank’s Take: No surprise seeing KUSHIDA back on TV this soon. Not sure where the Gulak thing is headed, but obviously KUSHIDA meets the 205 Live criteria so they pair up well. Not sure that signals good things for KUSHIDA’s future though.

Backstage, Bianca Belair is dragging Cathy Kelley around to get an answer for her next title shot. She sees Mia Yim come out of Regal’s office and Mia tells her she’s not going for a match with Shayna, she wants a rematch with Bianca. She didn’t handle anything last week.

Now we see Matt Riddle getting his ribs iced and taped up as Johnny Gargano checks on him. Gargano is asked about his condition. He says Bro is angry and the Era won’t like when Bro is angry. 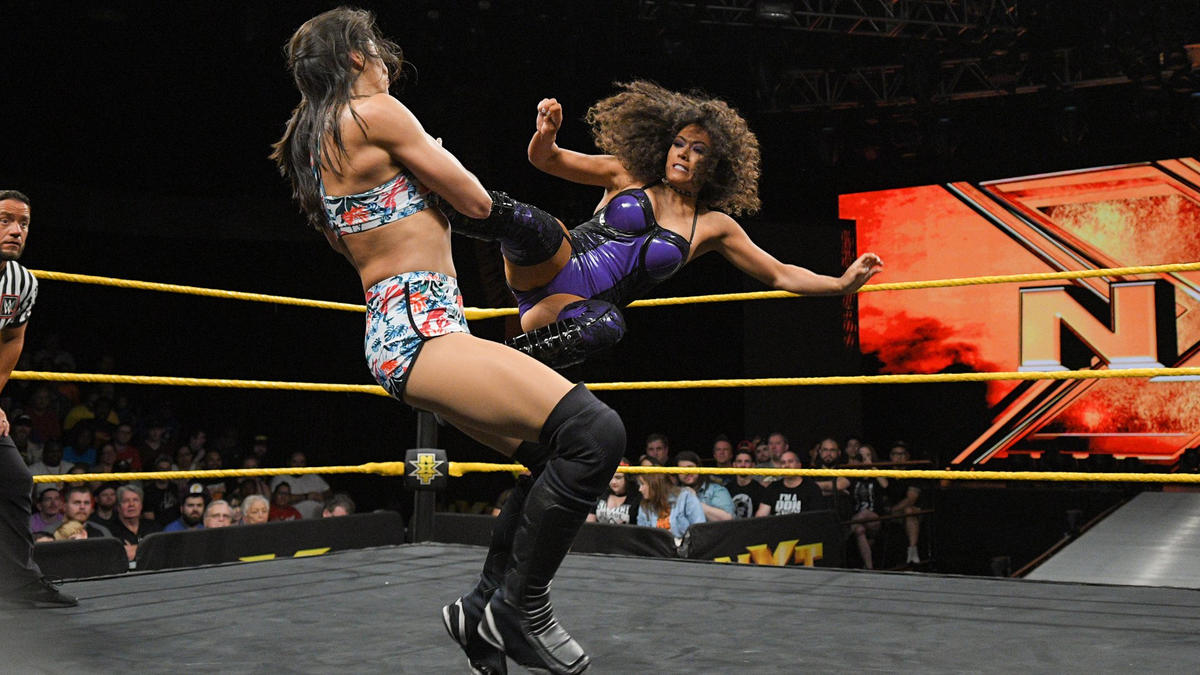 When they get back in the ring, Jesse tries a couple quick pins to steal the win. Spinning heel kick by Jesse but then she misses a big splash in the corner. Headbutt by Borne and then a reverse spinning neckbreaker by Borne gets the win.

K-Tank’s Take: Not much to this. I like the pair of Borne and Aliyah but they obviously don’t do much. 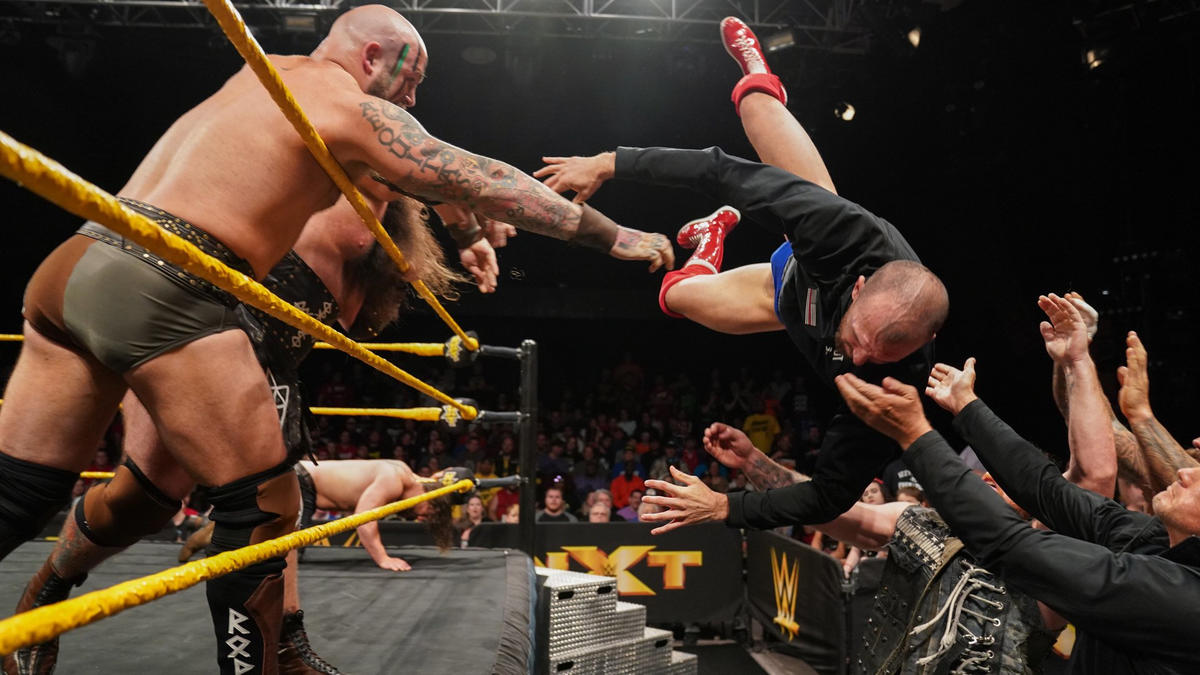 There’s less than 6 minutes left in the show as the bell rings, so don’t expect much. Erik with a running double knee to Dawkins right off the bell. Ford tags in and gets a knee strike to the face. Ivar tags in and they double team Dawkins in the corner. They get Ford and try their pop up powerslam, but Dawkins breaks it up. Ford is trying to steal a pin and gets a near fall. Dawkins and Ivar trade cartwheels and Dawkins hits the Sky High. Ford tags in, hits his high Frog Splash but Ivar manages to kick out.

Ivar escapes another double team and tags in Erik. Erik with another knee strike to Dawkins and gets a two count. As expected, here comes the Forgotten Sons. They attack Ivar, and the bell rings.

All six men start brawling on the floor and here comes Oney Lorcan and Danny Burch to join the fray. There are bodies everywhere and eventually, the Raiders dump everyone to the floor. Ivar with a somersault dive off the apron to take out the Forgotten Sons. The Profits get Erik up in a Doomsday Device and Ford drops him with a Blockbuster. Dawkins makes a fast count for his partner and The Profits run away as if they’ve defeated the tag champs. The Raiders aren’t happy and they take out Lorcan and Burch and then hit the pop up powerslam on Wesley Blake. The Raiders grab the titles and lay them across the mat with a ceremonial bow, more than likely to say goodbye.

K-Tank’s Take: It was announced after the show that the titles were officially relinquished. This has to end with the Street Profits becoming tag champions at Takeover. They’re finally fully established and the crowd is way behind them. They’re one of, if not the, most entertaining act in NXT right now. It’s not a very strong tag division, but they’re a team that can make things interesting while the division builds around them.

That’s it for this week. Thanks as always for tuning in. Until next time, don’t do anything I wouldn’t do… but if you do, name it after me!