Welcome one and all to another installment of the NXT Spotlight here at TJRWrestling. The calendar has flipped over to May and while we thought we had about 6 weeks until the next Takeover event, just a few minutes before I started writing this, it was announced that the Takeover event was moved to June 1st. Location to be announced on Monday. This is all because, of course, the Saudi Arabia shows mean more than anything else to WWE so they’ve had to reshuffle a PPV and a Takeover event. With that news coming out, we probably won’t see much of match development tonight, but they will have to make a card in a hurry now. For now, let’s see what this week brings us!

The show starts with a hype video of KUSHIDA’s debut tonight. They are definitely making him a big deal. 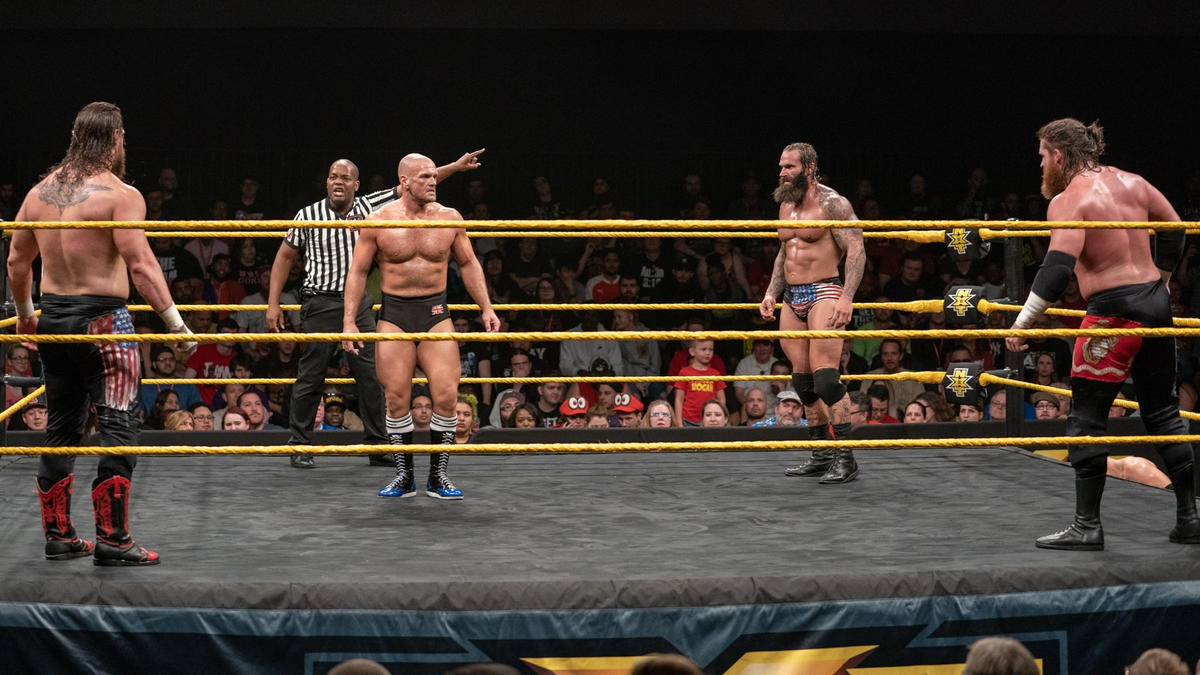 Lorcan and Cutler start us off. Cutler gets Lorcan in the corner but Lorcan comes back with some chops. Lorcan misses a dive off the second rope but comes right back with a running blockbuster and then a running European uppercut that sends Cutler to the floor. All three Sons are on the floor and Lorcan dives over the top rope to take them out. He comes back in the ring with Cutler and tags in Burch. Burch with a couple of shots and then quickly tags in Carillo. Carillo sends Cutler back to the floor again and the Sons try to regroup.

Blake tags himself into the match and Carilli is all over him. Nice springboard Japanese armdrag to Blake, but Ryker makes a blind tag so Carillo turns around into a spinebuster. The Sons make quick tags and work over Carillo in the ropes. Cutler hiptosses Blake onto Carillo’s back as he’s draped over the middle rope. Double neckbreaker on Carillo as Ryker comes off the middle rope with a diving headbutt for a two count.

Ryker with a cobra clutch on Carillo and tries the Bret Hart spot, kicking off the turnbuckles, but only a two count. Ryker tags in Cutler, who knocks Lorcan off the apron but Carillo is still able to tag in Burch. Burch with a couple of dropkicks and then a German suplex to Cutler. Burch with a front dropkick off the second rope and then locks on a Crossface. Ryker breaks that up. Carillo off the top rope with a missile dropkick to Ryker that grazes his shoulder. Carillo with a roundhouse kick to Blake and then Lorcan clotheslines Blake over the top rope. Carillo tries to dive onto the Sons but they pull Lorcan in the way and it’s friendly fire.

Back in the ring, it’s a 3 on 1 situation for Burch. Carillo tries a springboard attack but gets caught in mid-air with a double ax handle from Ryker. Carillo and Burch get powerbombed into double knees by Cutler. Ryker sets both men up in reverse DDT’s and it’s a double curb stomp that picks up the win.

K-Tank’s Take: That was a fun 6 man match. Good to keep the Forgotten Sons strong after an impressive showing in the Dusty Classic. I still don’t think the fans are fully invested in them yet, but I’m a fan.

We go to “Earlier today” where the Horsewomen are entering the arena. Cathy Kelley asked if they have any remorse for what they did to Kairi and Io. Shayna says there is no remorse. Cathy asks if they did it because Shayna has never beat Io. Shayna gets angry and slaps the mic out of Cathy’s hand.

We go to the PC earlier this week and see a confrontation between Mia Yim and Bianca Belair. Bianca tells Mia to keep her name out of her mouth. Stokley Hathaway made an appearance, but in was no way involved. I just think he’s entertaining. The confrontation has led to a match for next week between the two ladies. 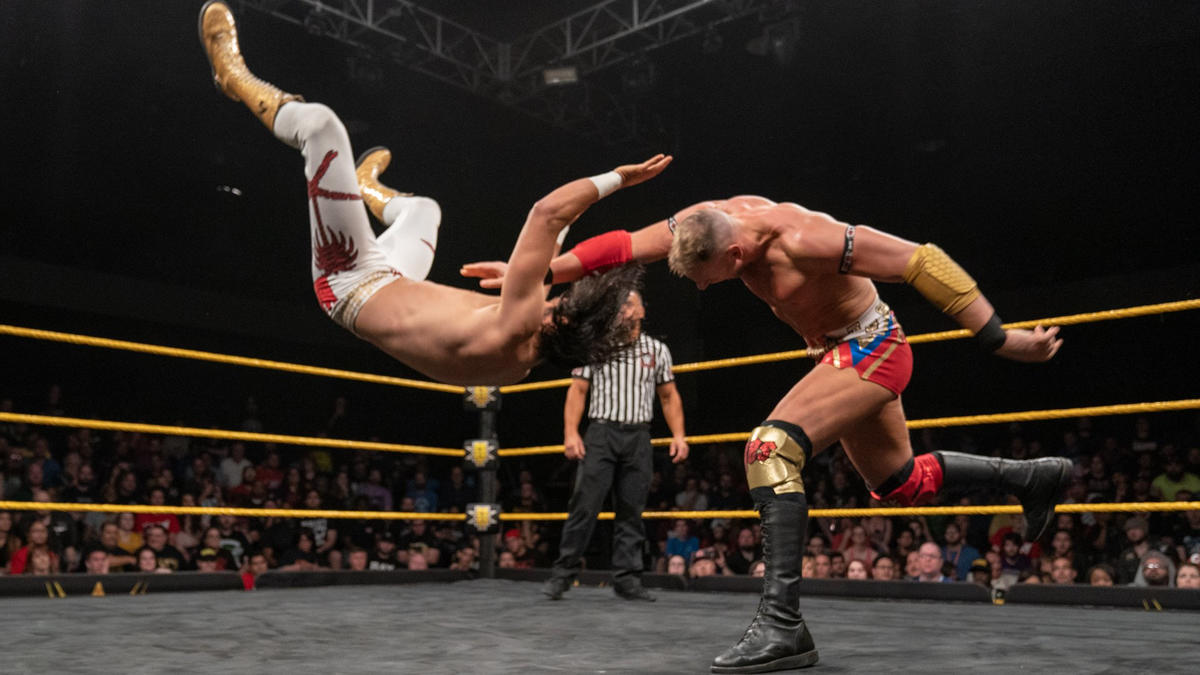 Dijakovic goes for the cyclone kick but Mansoor gets out of the way. Mansoor tries hanging on to a headlock but it doesn’t work. Mansoor with a chop to no avail. He does land a hurricanrana that sends Dijakovic to the turnbuckles. He goes to the top rope with a cross body but Dijakovic catches him in mid air and then just tosses him brutally over the top rope. Mansoor with a hard fall to say the least. They get back in the ring and Dijakovic with his toss suplex but Mansoor kicks out at two.

Post match, Dijakovic dumps Mansoor to the floor. After some replays, the Velveteen Dream’s music hits and he is brought out on a velvet couch with two ladies by his side. Dream says he’s got some works for Dijakovic after he had some words for Dream. Dream proceeds to sing his own version of the National Anthem. Afterwards, he tells Dijakovic, just like that it’s Dream Over.

K-Tank’s Take: So all of this was just…weird. I’m sure why Mansoor was chosen to have a good match with Dijakovic, when in his last match, he literally won after one match. If you’re trying to build Dijakovic to a program with someone like Dream, he needs to do more and take less from his opponent than he did here. And then for Dream… I think we all feel he can do no wrong, but this version of the Anthem may disprove that. I’m not offended by it or anything, I just thought it was a miss all around. The crowd cheered it because they cheer everything Dream does, but this did not get me excited for a potential matchup.

Next week will be Matt Riddle vs. Adam Cole. We then get a recap of the dissension between the Undisputed Era last week. We then go to an Undisputed Era promo. They say that Gargano is the luckiest man in the world. He is officially on borrowed time. Next week though, they’re going to show Matt Riddle how the Era is stronger than they’ve ever been. They focus on the future, not last week when Roddy dropped the ball. Roddy cuts him off and walks off on the rest of the group. Cole says he can’t take a joke or a loss like a man. Fish tells Cole that his timing for a joke is awful and goes after Roddy and that brings the promo to a halt. 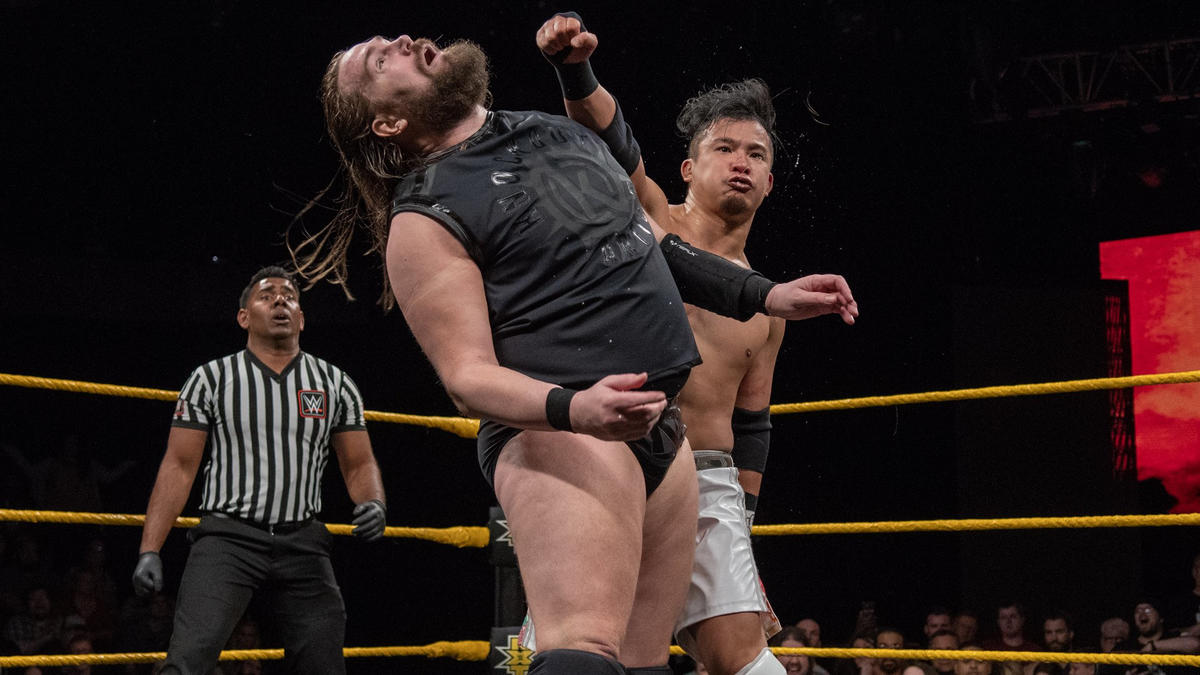 KUSHIDA with a really cool entrance. He’s in full Back to the Future mode like he was in New Japan, nothing looks to have changed. They had a countdown using his eyes on the Titontron and then some cool effects with blue lighting.

KUSHIDA wants to shake hands before the match and Ohno just kicks it away. Ohno with a go behind and just throws KUSHIDA to the mat. Ohno with a side headlock that KUSHIDA escapes and turns to a wristlock. Ohno reverses that and does a standing surfboard. KUSHIDA reverses it into a headlock. KUSHIDA with a front face lock that Ohno can’t escape until KUSHIDA lets him up freely. Ohno gets KUSHIDA down again but misses a legdrop. KUSHIDA with a dropkick to the face as Ohno is seated. KUSHIDA with a standing moonsault but Ohno catches him in a submission. KUSHIDA turns it into a pin attempt and Ohno has to let go and we’re at a stalemate.

Ohno tells KUSHIDA he’s good and now wants a handshake. KUSHIDA accepts it but of course Ohno with a cheap shot and then a big boot. Ohno with a knee drop and gets a two count. Ohno with a big chop against the ropes. KUSHIDA with a kick and then an enziguri from the apron. Springboard tomahawk chop and then a dropkick to the arm. KUSHIDA misses a roundhouse kick and Ohno gets him up in an Electric Chair, which he then turns into a sitout facebuster for a two count. KUSHIDA is now bleeding from the nose.

Ohno tells him that he doesn’t belong here, but KUSHIDA comes back with a flatliner into the turnbuckle. KUSHIDA with a springboard hurricanrana that he doesn’t connect cleanly with, and gets a two count. Big kicks and punches from KUSHIDA and now he makes Ohno shake his hand. KUSHIDA comes off the ropes with a back handstand but Ohno catches him in the back of the neck with an elbow strike. Only a two count though. Ohno with a big boot against the ropes. He then comes off the ropes again but KUSHIDA catches him with the windup punch. KUSHIDA with a penalty kick to the arm and that sets up the Hoverboard Lock, which makes Ohno tap out.

K-Tank’s Take: It’s a nice pairing of the fans treating KUSHIDA like a big deal, while the brand itself treats him like a big deal as well. Nothing extraordinary in this match, but it was a good showcase for a newcomer. Obviously, Nakamura and Asuka have shown he’ll be just fine in NXT, it’s once it potentially comes time for him to move on that will become the issue.

Thanks for joining me once again! Until next time, don’t do anything I wouldn’t do… but if you do, name it after me.