Welcome one and all to what should be a unique installment of the NXT Spotlight here at TJRWrestling. As we learned last week, Tommaso Ciampa had a serious neck injury get to a point where surgery could not be put off and he was going to have to be going away for quite a bit of time. So all Takeover plans were basically thrown out the window and tonight we’ll find out what the powers to be have decided is the course of action. We were supposed to get Keith Lee vs. Dominik Dijakovic tonight, but I don’t believe that’s happening anymore due to these circumstances. So let’s get to it.

Triple H himself comes down to the ring, holding the NXT Title in his hand. You know it’s a big deal when he’s making this announcement instead of William Regal. Of course the crowd is fired up to see him and is chanting like crazy. He says the chants show him he doesn’t need to tell anyone how special this place is. It’s here in NXT, in the NXT ring, that dreams can become possibilities. For some people, the dream starts in the ring. For others, it takes a long time. Miles up and down the road with no destination in sight, just to get to this point. The reality is, that dream can end at any moment. He was going to announce tonight that the main event for Takeover: New York was going to be Johnny Gargano and the NXT champion, Tommaso Ciampa. A match years in the making.

The truth is though, reality has made that match impossible. For Ciampa, the dream has been put on hold because reality mandated he have neck surgery, which has already taken place. So while he sits in a neck brace, he had to relinquish the title. So where one dream ends, another begins. The dream continues for Johnny Gargano, who will go to New York to compete for the NXT Title still. Against who? We’ll find out tonight when 5 men compete, Ricochet, Adam Cole, Aleister Black, Velveteen Dream, & Matt Riddle. They will have an opportunity to live their dream and go to Takeover: New York and compete for the NXT Title against Johnny Gargano.

That match needs to be competitive and decisive, so it’ll be 2 out of 3 falls. The winner will write his name in history and become the new NXT Champion.

K-Tank’s Take: Obviously the match will speak for itself, so just want to send well wishes to the former champ as he has a long recovery ahead of him. It sucks to see major injuries knock him out right in the middle of greatness in both 2017 and 2019. The style these guys wrestle at nowadays, it can lead to injuries like this. It’s just the era we’re in now. Some times a price is paid for the greatness we witness in the ring. The match tonight makes sense and obviously anyone who wins, it’s going to be a kickass match at Takeover.

We go to backstage with Cathy Kelley, who’s outside the men’s locker room. Kona Reeves comes out and says the news tonight is all right, but it’s not the finest. The Forgotten Sons come out next and talk about how they’re being forgotten again, because next week’s main event is what matters. Them vs. Ricochet & Aleister for the Dusty Rhodes Tag Team Classic. They hope Ricochet or Aleister win, because that means they’re not focused on the tag division and that makes it easier for them to cement their legecy in NXT. They won’t be forgotten no more.

We get some video packages hyping up the participants for tonight’s main event.

We get a video package following Tommaso Ciampa’s visit to Birmingham and how his surgery went. The doctors say this could take up to a full year of recovery. They talk about his resolve of how many surgeries he’s had in the last two years and still able to come back. There are some small clips of his wife and baby.

We get more videos hyping up tonight’s main event.

We go back to Cathy Kelley who catches up to Kairi Sane and Io Sharai, who are doing a photo shoot. They say they’re very excited for tonight’s main event. They’re asked about the Fatal 4 Way match they’ll be in at Takeover: New York. Io says nothing can come between their friendship and may the best woman win. Kairi says they both want the title and they’ll fight each other if needed. Bianca Belair shows up and says if it wasn’t for Shayna last week, they wouldn’t be in the match because she would’ve become #1 contender. She’ll just have to run through both of them now and there’s nothing they can do about it since she’s un-de-feat-ed. 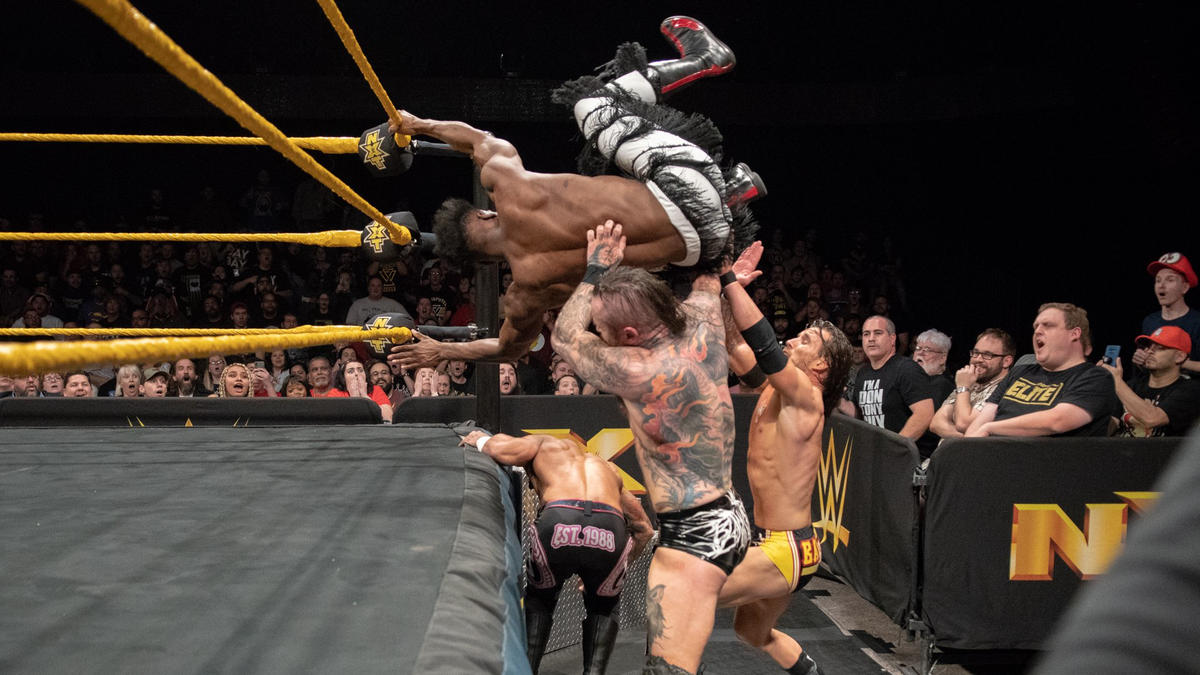 There are about 16 minutes left as the bell rings. With 5 guys, it’ll be hard to keep up with everyone, so I’ll just hit the highlights. Dream with the first quick pin on Black. Black with a huge big boot on Dream after countering a Dream Valley Driver attempt. Ricochet comes in and connects with his handstand headscissors on Dream. Riddle comes in and hits a three amigos of gutwrench suplexes on Ricochet. Cole comes in and hits Riddle with an enziguri.

Black and Ricochet double team Cole. They shake hands as they decide to face off. Cole cuts it off quickly. Cole with a neckbreaker that only gets a one count. Cole with a snap suplex on Ricochet, followed by a belly to back suplex. Ricochet comes back with a dropkick but Dream with a running knee that knocks him to the floor. Dream comes off the top rope and hits a double ax handle on Black and then sends Cole to the floor. Dream goes right back to the top and hits another double ax handle on Cole on the floor. He throws Cole in the ring and once more goes to the top. Riddle comes in the ring and catches him and hits him with a German suplex.

Black comes in and Riddle catches a kick and somehow turns it to the Bro-mission. Dream breaks it up. Black with strikes to Dream and then as Cole comes in the ring, he hits a double standing lionsault. Roundhouse kick to Dream that gets a two count. Black wants Black Mass but Cole pulls him out of the ring and throws him into the steel steps. Cole gets back in the ring and faces off with Riddle. they trade blows but Cole stomps on Riddle’s foot and then goes for a superkick but Riddle catches it and yet again turns it into a Bro-Mission. Yet again as well, Dream breaks it up.

All three men on their knees throwing haymakers. Riddle with a massive open hand strike to Dream, Cole with a pump kick to Riddle, and Dream with a superkick to Cole. Ricochet shows up and hits Dream with a Pele. Now all 5 men are just trading their styles of kicks until all five are down. Ricochet is first up and pulls Riddle in place as he then goes to the top. Cole cuts him off. Cole goes for a superplex but Ricochet fights it off. It ultimately leads to all 5 men with a tower of doom as Ricochet takes the worst of it.

It goes down to Dream and Black left in the ring. Black with a double knees attack of the second rope. He lands a bridging German suplex on Dream, but Riddle comes in and breaks it up. Riddle then hits a fisherman’s brainbuster on Black, but Cole breaks that up. Cole with a superkick and then the brainbuster over his knee, but Ricochet breaks up that pin. Ricochet with an ax kick to Cole. Cole comes back with two superkicks, one to the front and back of Ricochet. Ricochet avoids the Last Shot and hits a reverse hurricanrana instead.

Ricochet with an amazing back handspring moonsault over the top rope to take out Cole. Incredible! Riddle and Dream are in the ring now. Both men countering each other until Riddle with a nasty jumping knee strike! Riddle locks on a submission, but Cole pulls out the ref before Dream taps. Riddle takes out Cole but walks into Black Mass. Black then walks into the Dream Valley Driver. Dream to the top rope, but Ricochet comes out of nowhere and hurricanranas Dream onto Black and Cole on the floor!

Ricochet back to the top and hits a shooting star press halfway across the ring on Riddle. Ricochet with a pin on Riddle, but he’s sitting up and Cole comes from behind and hits the Last Shot mid-pin, turns Ricochet over and gets the three count! It went about 15 minutes.

K-Tank’s Take: WOW! What a match. I know John Canton gave it 4.5 stars and I probably would give it the same. Just nonstop action for the 15 minutes they had. It gets the K-Tank, “go watch this match!” seal of approval. They laid it all out for the opportunity and I loved how important it was to each competitor. Everyone had their moment to shine. I think at face value it would be obvious to see Cole winning this match. Ricochet and Black are doing their thing as a tag team, they’ve been building Dream and Riddle (which was announced for Takeover as well after this show ended.) So really, Cole was the only one that didn’t have anything going for him. He and Gargano will tear the house down, especially in two out of three falls. I think the right thing to do is have Gargano finally win the title and right all the wrongs of the past year, but I could also see them giving it to Cole and having Gargano come up short yet again. It’s going to be an interesting show to say the least!

That’s it for this week. No mention at all of Keith Lee & Dominik Dijakovic, which is disappointing. Maybe they’ll be the NXT show taped in New York. Next week is the Dusty Classic finals. So until then, don’t do anything I wouldn’t do… but if you do, name it after me!