Welcome one and all to a holiday edition of the NXT Spotlight here at TJRWrestling. I hope all of you had a very Merry Christmas with your loved ones. My Christmas wrapped up with some food poisoning, which is BRUTAL, so that’s why this edition is a little late this week. My apologies for that. As our last episode of 2018, we have two huge matches lined up. Heavy Machinery will get their much anticipated tag title match against Undisputed Era. We will also find out our second match for Takeover: Phoenix, as the #1 Contenders Fatal 4 Way Match for the Women’s Title will be tonight. A lot to get to, so let’s go! 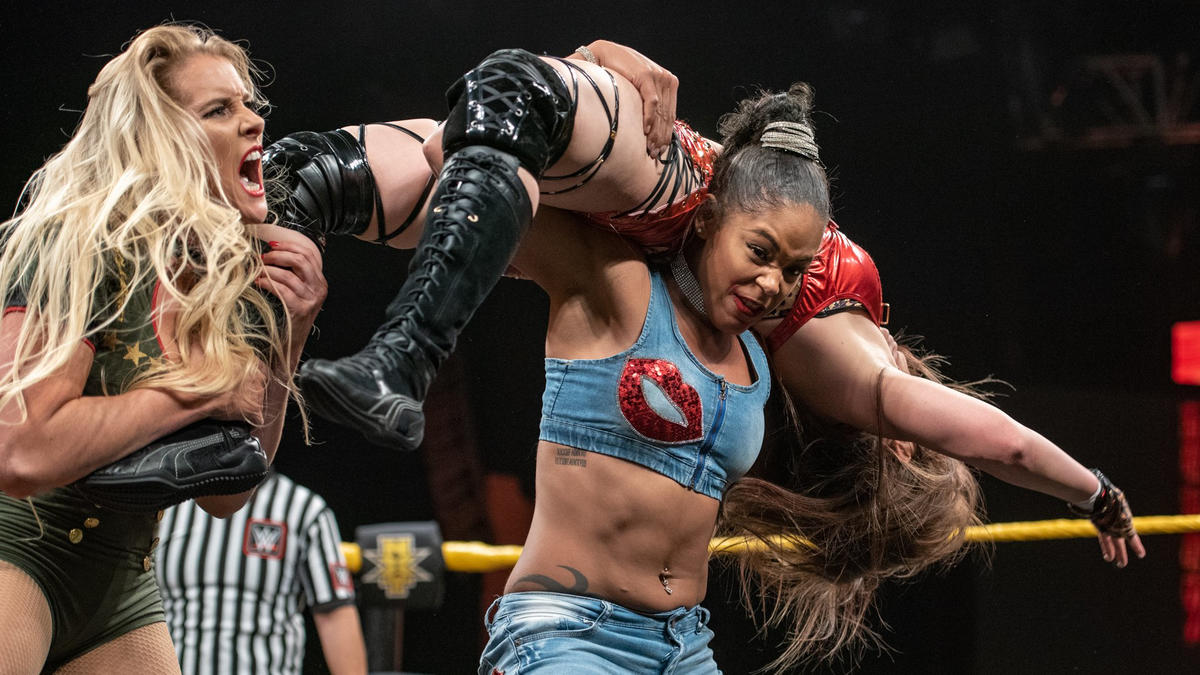 Lacey leave the ring and determines the other ladies can fight it out. Mia and Bianca go face to face, which leads to Io trying to roll up Bianca for a quick pin. Io and Mia team up to knock Bianca out of the ring. Mia dives through the ropes and lands awkwardly on Bianca, could’ve been bad new for Bianca. Lacey comes from behind on Io and whips her hard through the ropes, where she absolutely destroys Bianca and lands full force on her face. Bianca is not enjoying the beginning of this match, I can assure you that. Mia and Io go back in the ring and team up once again on Lacey. Mia with a cannonball in the corner, followed by running double knees by Io. Io holds up Lacey for Mia, but Lacey moves out of the way of a Mia kick, which connects on Io. Lacey gets the advantage on Mia and hits a nice slingshot elbow drop. Mia set up in the corner, Lacey drop toe holds Io into Mia, and then props them both up for her pop up Bronco Buster.

Mia goes out of the ring and Lacey now working over Io. Bianca is now back in the ring as Lacey whips Io into her, which leads to a shoulder tackle. Io gets Bianca out of the ring again though. It’s back to Io and Lacey until Mia breaks up a pin. Mia gets dumped to the floor herself and then Io tries another quick pin but Lacey kicks out. Lacey back on the offense but Bianca comes back in and gets Io up in the torture rack. Lacey pulls Io off and her and Bianca start talking trash. Mia comes in but they both take her out. They go for a double suplex but Io prevents it. Io cross bodies both of them, they catch her, but Mia dropkicks Io to be able to knock them down. All four women exchanging pinning attempts now to no avail. Lacey and Bianca are not getting along. Mia with a Saito suplex on Bianca. Io with a springboard dropkick on Lacey, and then Bianca with a spear on Io.

Bianca tries to pin all three opponents and all kick out. Bianca tries a Glam Slam on Io, but Io rolls out of it and it leads to a 619. Io to the top rope and hits another dropkick, but Lacey breaks up the pin and sends Io to the floor. Mia back in and striking Lacey until she turns right into the Woman’s Right. Io is able to break it up at the very last second. Io with a palm strike and then a bodyslam before going to the top rope and hitting her moonsault. Bianca comes in and starts whipping Io with the ponytail to break it up. Bianca powerbombs Io over the top rope and sends her into Mia on the floor. She gets Lacey up for the KOD and we have a #1 contender.

K-Tank’s Take: No surprise on my end with this result. Lacey is on her way out, so makes sense for her to take the fall and Bianca has been really pushing her undefeated streak, so makes sense to give her a title shot now as the women’s division does a bit of a turnover. I like the freshness of this matchup as it’ll be completely different than any match Shayna has had thus far. I do think Lacey is going to do well on the main roster. She comes ready with a TV character that they can do more with on a bigger stage. 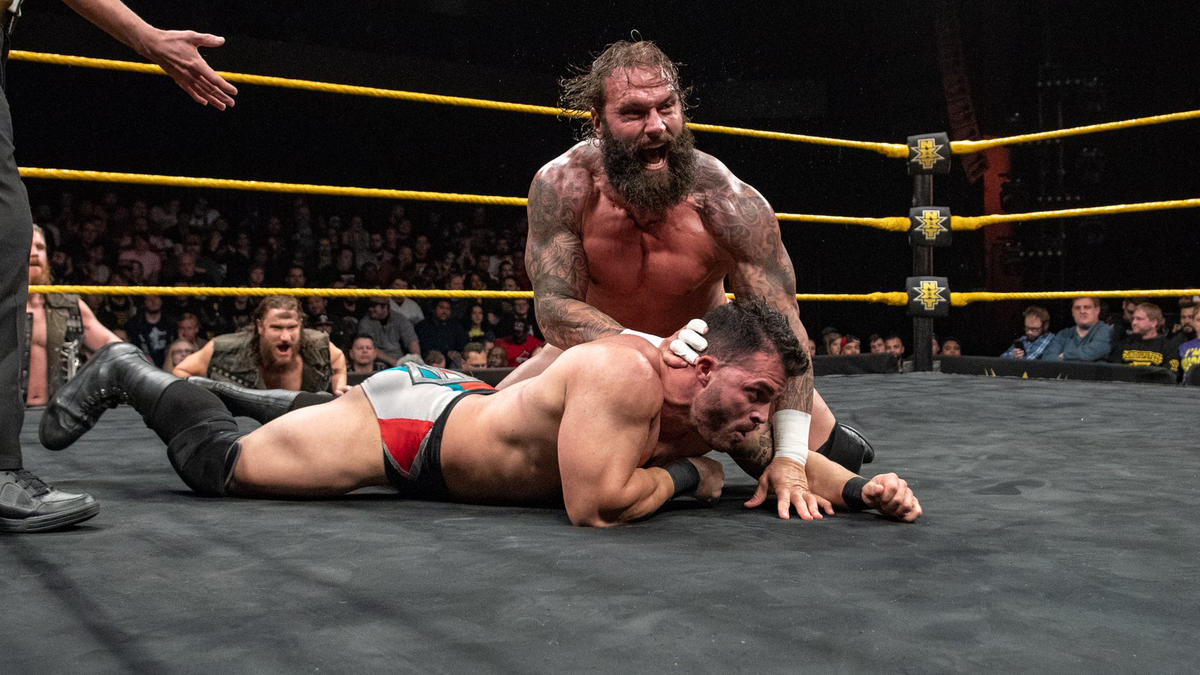 Ryker immediately gets Taverna in the corner and starts beating on him. Goes for a bodyslam but Taverna escapes and chops Ryker. Ryker doesn’t flinch and as Taverna comes off the ropes, Ryker catches him in a spinebuster. Ryker starts wiping Taverna’s face into the mat. Ryker hot shots Taverna over the top rope, which Taverna almost misses completely, and then sets up for his slingshot powerbomb. That gets a sarcastic pop from the crowd because they know it’s over, as they were dead silent for everything else.

K-Tank’s Take: I like the Forgotten Sons, but gotta call it like I see it. The fans were dead for this. They did not care at all. The finisher looks cool, but that’s about it.

We get a great video package for Velveteen Dream, where he recaps his year. Great stuff in here where he shows quotes from John Cena, Kurt Angle, Shawn Michaels, Triple H, & Hulk Hogan talking about how much potential they see in Dream.

We now go to The Champ for one of his backstage chats. He says when he makes a promise, he delivers on them. Sometimes though, he feels like a broken record. Like he’s in a room by himself talking to a wall. Last week was his vindication though. Someone has been listening this entire time. Johnny Gargano listens and followed his lead. He pinned the man that’s getting a title shot at Takeover: Phoenix. So where does that leave Gargano? He can’t get a shot at the champ because that’s already taken. Maybe he could challenge for another title though. Maybe the North American Title. He tells Johnny to think about it. This is everything they ever dreamed about. Two kids coming into NXT without contracts. Every car ride and hotel, they talked about DIY taking over NXT. This is their Takeover. Takeover: Phoenix ends with Tommaso Ciampa as NXT champion and Johnny Gargano as NXT North American Champion. Two kids taking over the world. Johnny, the possibilities are endless.

K-Tank’s Take: Well that’s a hell of a way to try and set up a title match for Takeover, but if this leads to Gargano vs. Ricochet 1 on 1… YES PLEASE!!

Next week’s episode will show us the nominees for the 2018 NXT awards, as well as Matt Riddle vs. Kassius Ohno in their rematch. 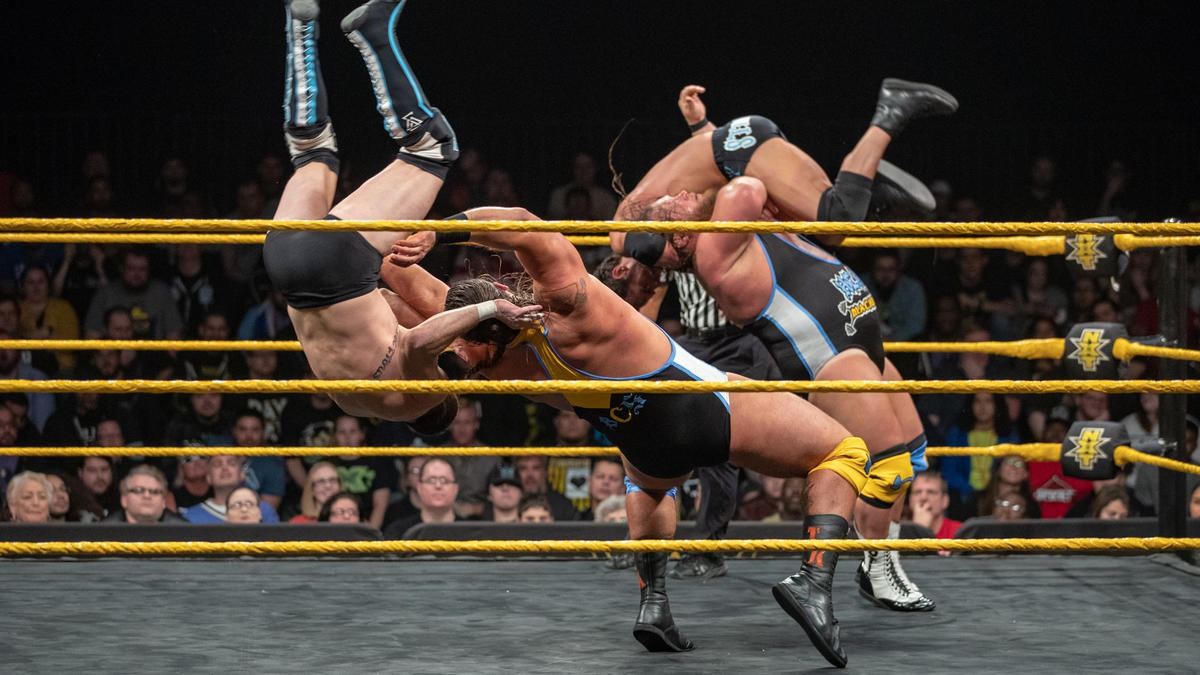 No Cole or Fish out with the champs. 13 minutes left in the show as the bell rings. Strong and Knight start things off. O’Reilly tries an early distraction but it doesn’t work and Knight shows off some amateur wrestling skills on Strong. O’Reilly makes a blind tag, but Knight is able to knock him down as he gets in the ring and hiptosses Strong. O’Reilly recovers quickly and lands a few kicks to the back of Knight’s leg. Strong back in the ring but Knight drops them with a double clothesline and tags in Dozovic. Dozovic rams Strong into the turnbuckles and then splashes O’Reilly. Heavy Machinery start double teaming Strong and showing off their power.

All four men end up in the ring and Heavy Machinery with a double team bear hug collider and then a double overhead belly to belly throw. Belly bump to Strong. Knight and O’Reilly are legal as O’Reilly tries to run away. Knight runs over Strong and then clotheslines O’Reilly on the apron. O’Reilly grabs Knight’s leg and the ref pulls him off, which leads to Strong coming from behind and trying to back suplex Knight on the apron, but he misses completely and Knight lands hard on the floor. I dunno if Knight was heavier than Strong expected but that couldn’t have felt good.

Now the champs have Knight in their corner and are working him over. Knight is doing everything he can to get out of their corner, even back body dropping Strong over the top to the floor. O’Reilly goes back to that left leg though and is able to stop his momentum. The champs with a double team in the corner and then Strong with an Olympic slam for a two count. Strong with a submission on Knight and as Knight crawls to his partner, O’Reilly comes in and pulls them back toward the champ’s corner. Knight finally escapes and then gets up and clotheslines Strong. Dozovic finally gets the tag and is all over both champs. Awesome head and leg suplex on O’Reilly. Double avalanche splash in the corner. Here comes The Caterpiller on Strong. O’Reilly back in but Dozovic catches him in mid-air and tags in Knight. All four men end up in the ring and start brawling. Strong is disposed of and then they do a double team catapult into a Judo throw, which they’re calling the Hoss Toss.

O’Reilly is down and Knight going for broke with a moonsault but O’Reilly moves. Knight ends up in the corner as Strong tags in, but Knight moves out of the way of a jumping knee and tags in Dozovic. Dozovic plows over Strong, but Strong comes back with an enziguri. Dozovic comes back with a big lariat for a two count. Now Dozovic decides it’s his turn to go to the top rope. Strong stops him with an enziguri. Strong tries for a superplex, and then O’Reilly comes from underneath to help propel Dozovic over. Dozovic kicks out. O’Reilly kicks Knight off the apron and they set up Dozovic for a double team strike to the head, but Dozovic still able to kick out. They ensure Knight stays out of the ring and now go for Total Elimination, which gets the pin.

K-Tank’s Take: The crowd did not once think Heavy Machinery had a chance to win, which took away from the match. A little unfortunate as this was a good match and probably Heavy Machinery’s best effort thus far. It makes sense to move a team to the main roster as the tag division is absolutely stacked in NXT right now, so they need to make some room somehow. I think they’ll be entertaining obviously, but with the recent track record of NXT mid-carders who get called up out of the blue, I don’t like their chances.

That’s it for this week. The next time we’ll meet is in 2019. So Happy New Year to everyone and be safe! Until next time, don’t do anything I wouldn’t do… but if you do, name it after me!