Welcome one and all to another installment of the NXT Spotlight here at TJRWrestling. We are closing 2018 with one of the biggest TV main events of the year, Johnny Gargano vs. Aleister Black inside a steel cage. We’ve also received the news that the likes of Lacey Evans, Nikki Cross, Heavy Machinery, & EC3 are joining Lars Sullivan up on the main roster. That’s going to open a lot of opportunities for some of the guys that haven’t received their push yet like Keith Lee and Dominik Dijakovic. One of those we’ll see in action tonight. Let’s get to the action! 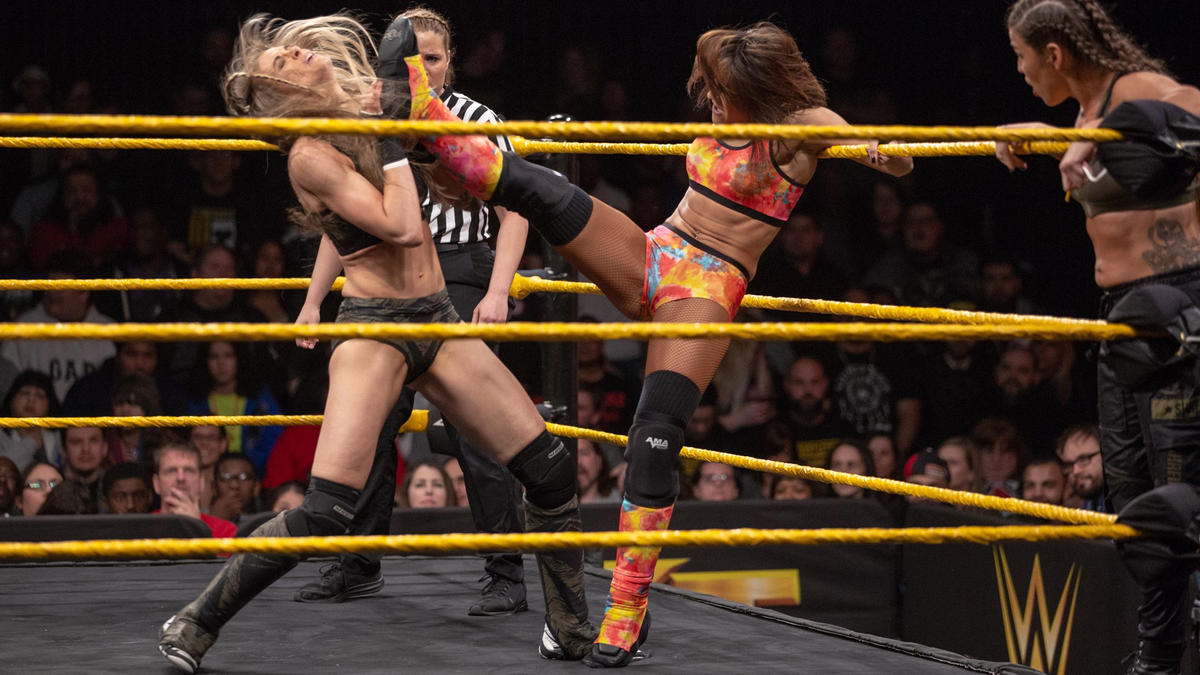 Duke and Shafir come out to Shayna Baszler’s theme for those interested. Dakota and Duke will start this. Duke overpowers Kai after the tie-up. Duke with a takedown after Dakota avoids her in the corner. Dakota nails her with a seated kick and then a double foot stomp for a two count. Another kick to the face but Shafir comes from behind and kicks her in the spine. That allows Duke to get the advantage and lay in some punches. Dakota trapped in the wrong corner as Shafir tags in. Shafir with a standing Dragon sleeper. Dakota with some knees but Shafir with a strong takedown for a two count. Dakota thrown hard back in the Horsewomen corner and Duke tags back in.

They double team Dakota and Duke with a seated kick of her own for a two count. Dakota with a nice running back kick that finally allows her to make the tag to Io . Io and Shafir now in the ring. Io with running forearms. 619 by Io and then a nice springboard front dropkick. Shafir set up in the corner and Io comes at her with running double knees. Io sets up for a moonsault and Duke tries to distract her, but Dakota comes in with a running big boot to knock her off the apron. Io leaps with her moonsault and lands it perfectly for the win.

K-Tank’s Take: Kairi Sane missed these tapings due to having hand and mouth disease, so they’re just killing time until they can get back to having the 6 woman storyline. Shafir and Duke looked fine in their first TV match. I wouldn’t expect them to look bad in the ring as they’re obviously great friends with Ronda and Shayna, so they can all bounce ideas off each other, and Shafir was just recently married to Roderick Strong.

We get one last vignette for Dijakovic before his debut tonight. Feast your eyes.

We go to two weeks ago when Matt Riddle defeated Punishment Martinez, but was then attacked by Kassius Ohno after the match. We then go to some comments from Matt Riddle. He says that he’s not too happy about it. He can’t blame Ohno though, he knocked Ohno out in 7 seconds before. He dares Ohno to get in the ring with him again though, because he’ll knock him out in 7 seconds again. Bro. 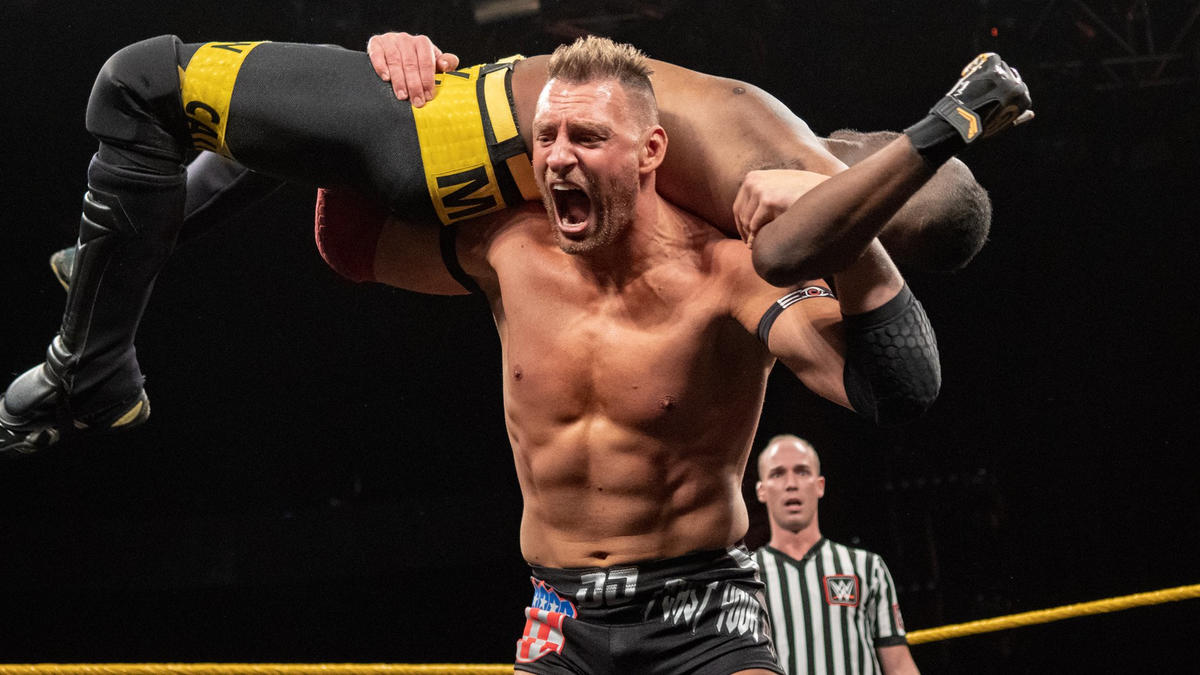 We’re apparently using Dijakovic’s first name after all. Sorry Rusev & Cesaro. Maybe it’ll happen. Big punch to the midsection by Dijakovic. Forearm smashes and then a clothesline. Throwing suplex that sends Mackey across the ring. Running forearm in the corner and then a standing backbreaker followed by him just throwing Mackey across the ring again. He yells it’s time to Feast Your Eyes, and that leads to a Burning Hammer into a strong knee lift. That looks impressive. That’s the finisher.

K-Tank’s Take: The biggest takeaway from this match is I’ve been pronouncing his name Di-jak-o-vic. They’re pronouncing it Di-ja-kovic. Looks like he’ll be a heel, which is fine as all the new indy stars can’t be faces. He and Keith Lee have had some INCREDIBLE matches on the indies and I would love to see that feud immediately started up here in NXT. They’ve also been a tag team, but I don’t see Keith turning heel.

We get a vignette for Heavy Machinery as they’re in action next.

We find out that William Regal has decided after tonight, Io Sharai will be the 4th woman in the Fatal 4 Way #1 Contender’s Match next week. So it’s Bianca Belair, Mia Yim, Lacey Evans, & Io Sharai. 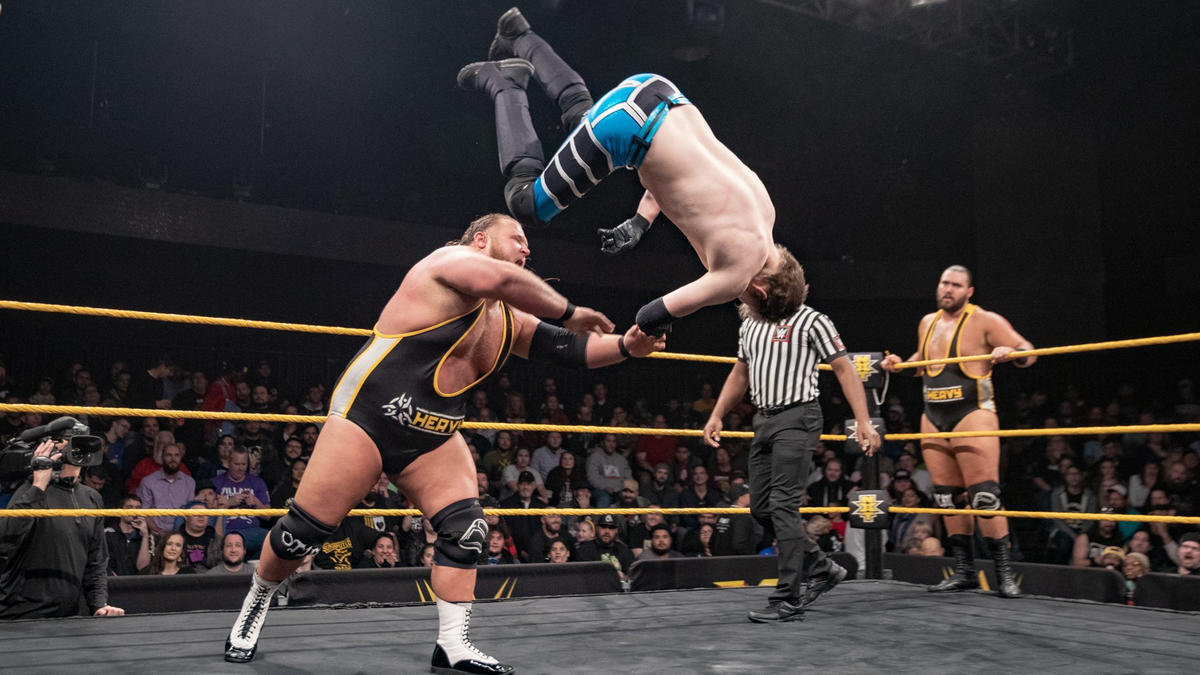 Otis throws Howell across the ring, who immediate goes to tag in Dakarto. That doesn’t go well as Tucker comes in and they do a super collider from the powerslam position. Howell gets thrown out of hte ring and now Tucker is just running corner to corner with Dakarto and ramming his back into the turnbuckles. Undisputed Era shows up to watch now. Dakarto tries a forearm to the back of Tucker, but that obviously doesn’t work. Otis tags in and they do the Compactor to Dakarto, but Otis pulls him up at two to leave a message to the Era. Howell now gets Compacted. That’s still not enough as Otis manhandles both guys, gets them both up in a bodyslam and it’s a double Compactor that finally finishes them off.

K-Tank’s Take: Call it a hunch, but I don’t think Heavy Machinery are winning the NXT tag titles. That’s why I hate the random NXT call-ups. Much like I don’t think Lacey Evans is winning the fatal 4 way. They’re an entertaining team. I don’t know that they’re ready for the main roster, but with them moving on, maybe we can bring back the Street Profits who haven’t been on TV in seemingly forever.

We see Aleister Black warming up for his Steel Cage match, and are reminded that he’ll be taking on Tomasso Ciampa at Takeover: Phoenix for the NXT Title. 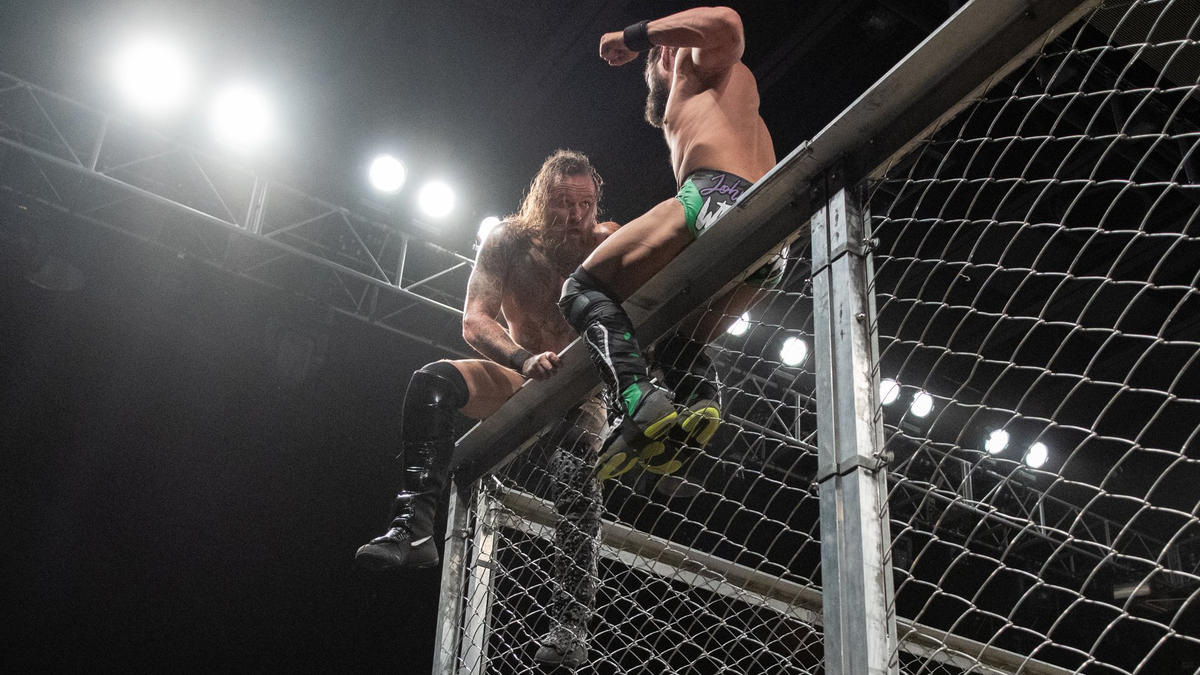 Black makes his way around the cage on the outside, and then as he goes to go inside the structure finally, Gargano attacks! He sweeps out the leg and Black hits face first on the edge of the cage door. They start brawling all over ringside. Gargano rams Black into the cage and then throws him into the steel steps. Black recovers and throws Gargano in the cage, and we still have 20 minutes left in the show as the bell rings.

Gargano immediately tries to escape but is cut off. Black slides out of a bodyslam attempt and then kicks Gargano down. Black misses a Lionsault attempt but lands on his feet and comes back with a vertical suplex. Black tries to kick Gargano’s face into the cage but Gargano moves and starts to climb again. Black follows him up there, but Gargano ends up crotching him over the top rope. Black is the first one to taste the steel as Gargano throws him face first into the cage. Gargano grinds Black’s face into the cage. Gargano works over Black in the corner with chops. Black whipped to the other side and that’s where Black avoids Gargano and starts a comeback. Gargano brings him down with a catapult attempt. Black grabs the cage and tries to climb but Gargano cuts him off. Black makes his way to the top turnbuckle and does a beautiful standing moonsault.

Now it’s Gargano’s turn to be thrown into the cage on all four sides. Big flurry of kicks by Black. Pump knee strike on Gargano that gets a two count. Black now makes his way to get out of the cage. He’s sitting on top of it and it looks like he could easily win, but he shakes his head no and comes back into the ring. He jumps off the top rope but Gargano kicks him in the midsection and sends Black back into the cage. Black tied up in the ropes and Gargano superkicks him straight in the face. Now it’s Gargano on top of the cage but Black gets to him. Both men on the top rope and Gargano, out of nowhere, somehow does a sunset flip powerbomb for a two count. That was incredible.

Dueling chants from the crowd as both men on their knees. Black with a brutal looking European uppercut. Both men trading straight shots. Gargano with a superkick but Black immediately comes back with a jumping knee strike. Gargano caught between the ropes and the cage as Black delivers a big boot twice to him. Gargano ends up by the door and as Black does another knee strike, the door opens and Gargano is halfway out. Black is able to pull him back in. Gargano with an enziguri and once again is halfway out before Black pulls him back. Huge kicks by Black. Black goes for the Lionsault but Gargano jumps on the second rope with him and Russian leg sweep off the second rope. Gargano immediately locks on the Gargano Escape! Black breaks it once, but Gargano immediately hooks it back on. Somehow Black gets out again and throws Gargano into the cage. Gargano catches himself and starts to climb. He ends up on the other side, but Black stops him and now both men are seated on top, trading punches. Gargano pulls Black onto the top rope and starts delivering headbutts. Gargano looks like he wants an RKO type move off the top, but Black just throws him off.

Black jumps off the top rope with a double knees, and then a vicious German suplex that gets a two count. Black goes to pick up Gargano with his foot and tells Gargano he’s making him do this again. Gargano moves the leg and traps it in the ropes, which leads to Black getting superkicked. Black gets lawn darted into the turnbuckles and then gets lawn darted into the cage. Gargano pulls Black up and tells him that he’s absolving Black of all his sins. But he can’t do anything as Black comes out of nowhere with Black Mass! Both men are down.

Gargano is somehow the first to his feet. Gargano is trying to climb out as Black is crawling to the door. Gargano is on the other side first, and as Black gets to the door, here’s Tomasso Ciampa to slam the door in Black’s face! Ciampa gets in the cage and starts beating on Black. Gargano had the match won, but he comes back in the ring and stares down Ciampa. They’re on opposite sides of the ring as Black is in between them… could it be? Oh my, it is! The DIY tag team finisher! Duel knee/superkick! Gargano stares at Ciampa and can’t believe what he’s done. Ciampa has a smirk on his face. Gargano decides to cover Black and he gets the pin!

After the bells rings, Ciampa walks up the ramp, clapping for Gargano. Gargano props himself up against the ropes and assesses what just happened. He then does Black’s seated pose next to him before finally leaving the cage with a sly smile as our show comes to an end.

K-Tank’s Take: Man, that was fantastic. Not as good as their Takeover match, as the cage came into play a lot here. Not necessarily complaining as I liked the old school approach to the cage match. I’d probably give this match 3.75 stars. It was really good and that ending was fantastic. It adds so much intrigue to not just Black vs. Ciampa at Takeover, but everything beyond that. Sometimes this storyline feels like it’ll never end, and that’s not a bad thing.

That’s it for this week. Thanks for tuning in again. Until next time… don’t do anything I wouldn’t do, but if you do, name it after me!