Welcome one and all to the latest installment of the NXT Spotlight here at TJRWrestling. The last time we were all getting together, NXT was destroying Los Angeles with a fantastic Takeover event, headlined by WarGames. Last week’s episode of NXT TV was mainly squash matches and reviews of that Takeover show. It did, however, set up tonight’s main event between Keith Lee and Lars Sullivan. Hopefully Keith is able to show what he can do finally. Now that Los Angeles is in the past, our eyes turn to Phoenix for the next Takeover event in January during Royal Rumble weekend. Let’s get to the action tonight!

We are at San Jose State University for this show. These matches were taped the night before Takeover. 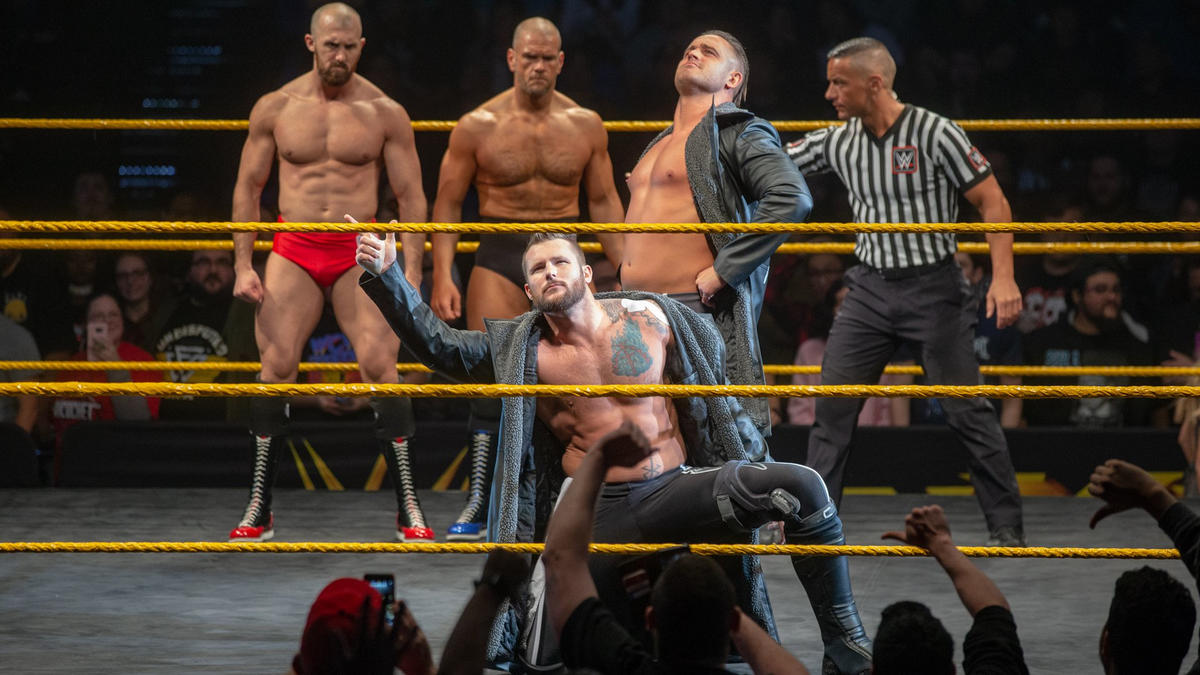 Burch and Shane Thorne to start off. Thorne taunts Burch with a shove before they lock up. Burch gets the advantage and Lorcan tags in early. Quick tags by the babyfaces and work over Thorne’s arm until he’s able to escape and gets Nick Miller in the match. Lorcan catches Miller with a dropkick. After a near fall for Lorcan, all four men get in the ring and The Mighty get trapped in separate submissions, Lorcan gets a single leg crab on Miller and Thorne is tied up in a crossface by Burch. The Mighty escape their predictament and Miller comes back with a belly-to-back on Lorcan. The Mighty start the working over of Lorcan, keeping him on their side of the ring. Multiple tags by both men. They eventually hit a double side Russian leg sweep. More working over of Lorcan after a near fall by The Mighty. Lorcan finally gets enough separation from Thorne to tag in Burch. Burch with the hot tag and knocks down Miller. He goes to the turnbuckles and hits his missile drop kick. Lorcan back in, but Miller sends Lorcan into Burch and that sends Burch to the floor.

Thorne and Lorcan in the ring exchange European uppercuts. Thorne with a dropkick. Lorcan back in and nails a nice suplex and that leads to both of The Mighty on the floor. Lorcan goes for broke and dives high over the ropes to take out his opponents. Burch tags in and Burch tags in Lorcan . Burch gets Thorne on his shoulders and he sends Burch into Lorcan. Miller tags in and they send Lorcan into Burch. Burch with a spear to Thorne and Lorcan with a sunset flip on Miller for the three count. Lorcan and Burch looking for the finish, but The Mighty escape a double team move. All four men in the ring and starting to break down a bit. Burch spears Thorne, meanwhile, Lorcan tries to steal a win with a sunset flip on Miller and it works!

Post match, The Mighty don’t wait around to get some revenge. They take out Burch and then send Lorcan shoulder first into the ringpost before they’re content with their work.

K-Tank’s Take: Always love seeing Lorcan and Burch in action. Hope they can somehow get back in the tag title picture, but for now, this angle will obviously continue.

We get a recap of EC3’s win over Adam Cole a few weeks ago, and the subsequint beatdown by the Undisputed Era that injured his knee.

Now we go to Dakota Kai, Io Sharai, & Kairi Sane. Kairi accepts the ref’s decision to say she lost to Shayna at Takeover, but she knows her shoulder was up and she’s not done with the champ. Dakota will not let The Horsewomen use their numbers advantage, and Io says that Kairi is her best friend and she’s got her back. 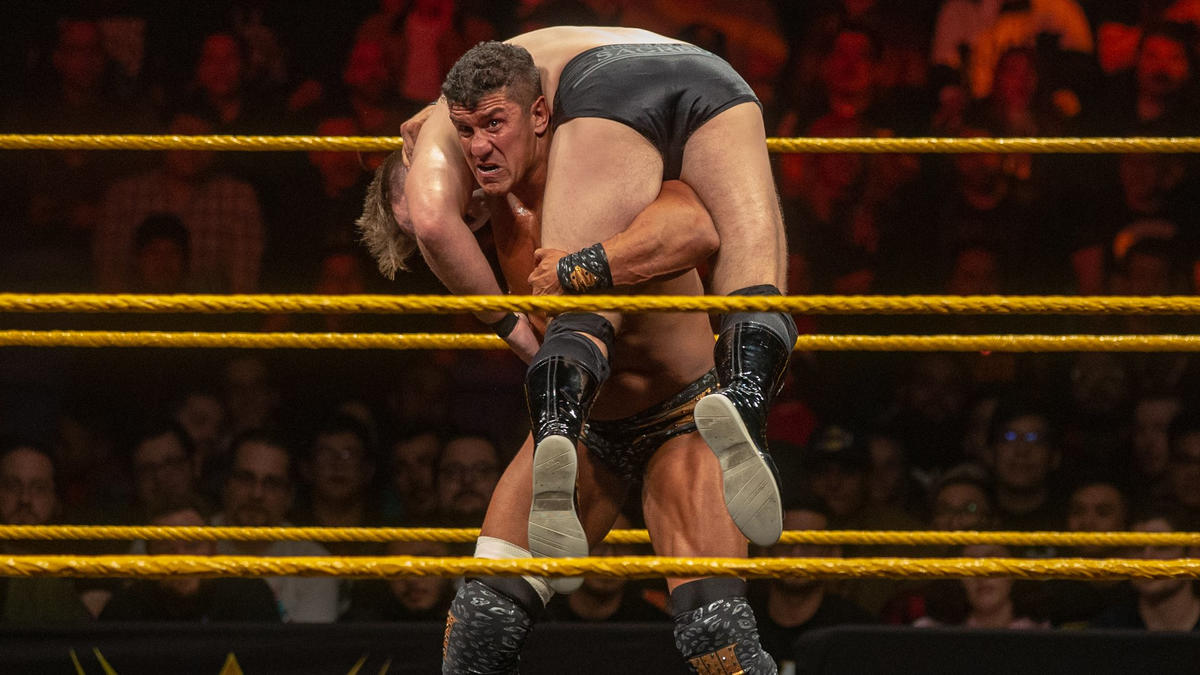 Multiple lockups to start with EC3 exerting his power over Barthel. EC3 with a long side headlock after that. Barthel comes back with an attack in the corner and then EC3 gets tied up in the ropes and Barthel dropkicks him to the apron. Barthel is proud of his work and follows up with an Irish Curse backbreaker for two. Barthel does his best to wear down EC3 after that, but EC3 fights him off and hits a back elbow followed by a bodyslam. EC3 with his choreographed elbow drop and then the One Percenter after that. That’s all she wrote.

Post match, EC3 grabs a mic and says they tried to end him but didn’t finish the job. This really only pertains to Bobby Fish. It’s not eye for an eye or knee for a knee, he’s coming for all of Bobby Fish because he is clearly in the top 1%.

K-Tank’s Take: I like EC3 calling out just one guy specifically. It was definitely Fish that was the difference maker. That will at least get EC3 involved in a top storyline moving forward. Hopefully this one lasts longer than his last two.

We get a vignette for Dijakovic. No more Donovan. On one hand, another first name down the drain in WWE. On the other, He deserves an opportunity because he can do incredible things in the ring. He’s going to impress a lot of you. If he was just going to go by one name, I wish it was simply Dijak instead of Dijakovic.

We see the media outside the PC try to get a word with Candice LaRae, but she doesn’t want to answer any questions. 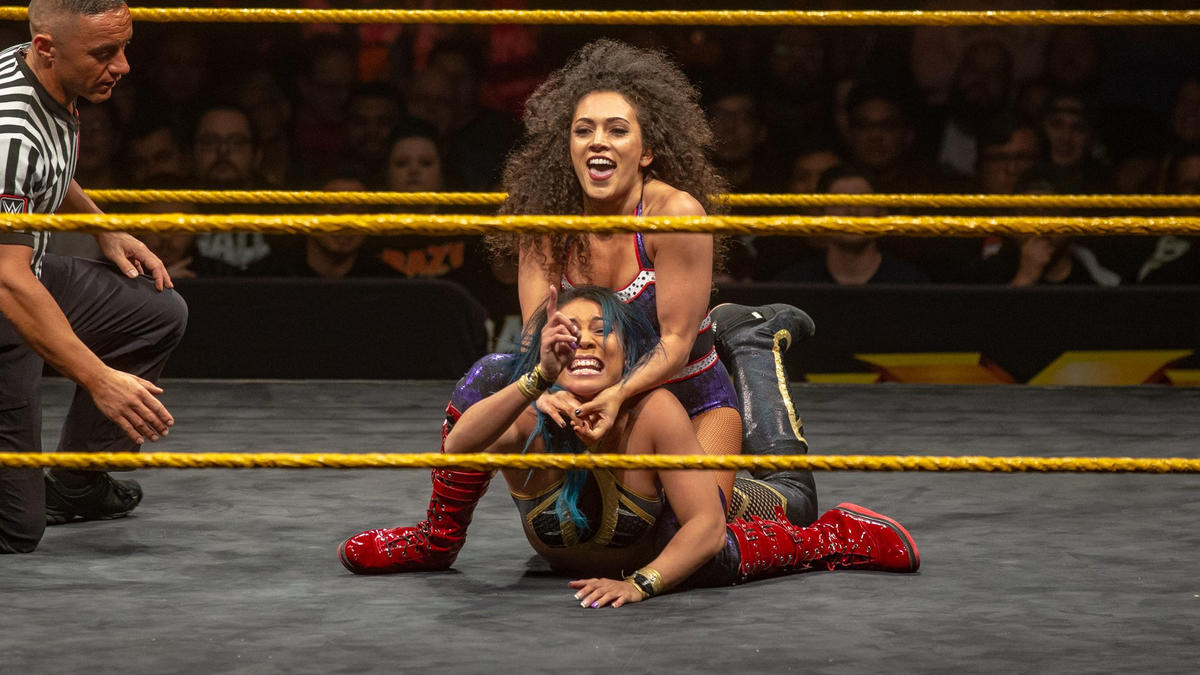 Mia starts by trying to show good sportsmanship with a handshake, to which Borne initially accepts but ultimately just slaps Mia. Mia with a trio of arm drags. Borne doing all she can to get away from Mia, but it doesn’t work. Borne finally gets the advantage in the corner and works over Mia in the turnbuckles, beating her down. Mia is facing away from Borne and Borne with a reverse Bronco buster of sorts, and then headscissors Mia while pounding on the back of Mia’s head. Borne lands a spinning suplex for a two count. Mia works out of a hold to lock on an armbreaker on Borne, but Borne gets to the ropes. Borne sends Mia back into the turnbuckles but Mia comes back with a Tarantula in the corner. Mia with a flurry of kicks and dropkicks. Shotgun dropkick into the corner, followed by a big boot on Borne that Mia did not get all of. It’s enough to get Mia to pull Borne in for Sole Food, which Borne sells fantastic. That’s the finish.

K-Tank’s Take: Big fan of Mia, but clearly by the women’s promo we had earlier, she’s nowhere near the title scene now. I would expect a lot of these type matches in the future.

We still a photograph of The War Raiders inside the training room at the PC, as apparently they’re a little worse for wear after War Games.

It’s now time for another sit down with The Champ. Ciampa tells us that he warned us when he came back that he would be the most dangerous SOB ever in NXT. When he makes his way to the ring next week on TV, he wants everyone to do just one thing… follow his lead. 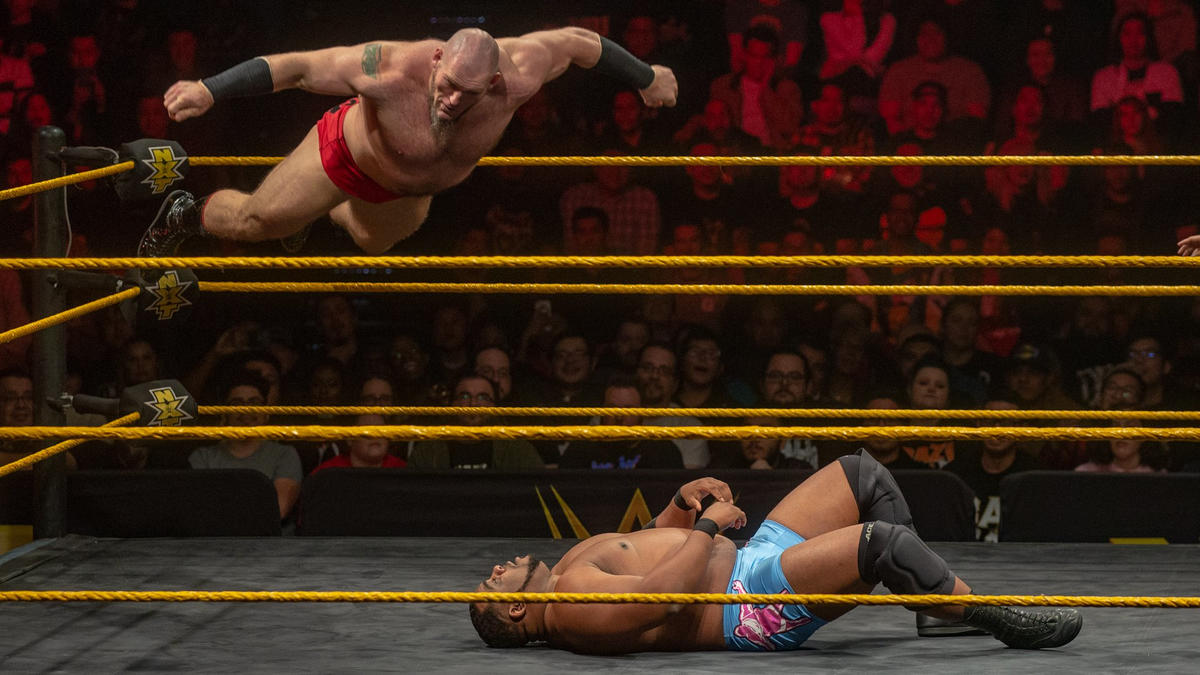 Right at 10 minutes left in the show as the bell rings. Was hoping for a little longer for this match, but unfortunately I think we know where this is headed. Lars had some fog machine effects on his entrance, which lead to a cool visual of fog floating around both big men as they stare down each other. A shoving match breaks out until Lars tries to shoulder tackle Keith to no avail. Keith lets him know he was unsuccessful. Both men try to knock the other down but no one falls. Lars off the ropes and Keith tries a leapfrog, but Lars catches him impressively. Lars rams Keith hard into the turnbuckles. Lars with big blows in the corner, but Keith cuts him off and tells Lars to bask in His glory. Lars comes right back with a running avalanche splash that knocks Keith back into the ropes. That looked impressive. Keith is stunned, but avoids a bodyslam and comes at Lars with a huge cross body.

Lars avoids Keith in the corner and dumps him to the apron. Keith actually slingshots back into the ring, trying to take out Lars, but Lars gives him a big boot in mid air. Lars works over Keith and then picks up Keith in a back suplex and tosses him halfway across the ring. That’s true power right there. Lars with a slidin clothesline, followed by a diving headbutt off the second rope for a two count. Lars wearing down Keith and hitting some clubbing cross face shots. Big splash in the corner by Lars. Keith manages to jump over Lars charging him and Lars hits the ringpost. Keith getting a second wind, but gets dumped to the apron again. This time though, Keith is able to slingshot back in with a cross body on Lars for a great near fall. Both men absolutely unloading on each other. Keith is finally able to drill Lars with a body blow that sends Lars to the floor. Keith Lee with a corkscrew slingshot dive over the top rope to the floor! WOW! The crowd loved that one. Keith rolls Lars back into the ring quickly, but Lars manages to kick out. Keith goes for broke and comes off the second rope with a picture perfect moonsault, but Lars moves! Lars stumbles to his feet, manages to get Keith lifted for the Freak Accident and picks up a very hard fought victory.

K-Tank’s Take: Whoa. What a battle! From a biased perspective, I hate seeing Keith lose his first match already, but no shame in that effort. I don’t know that the powers to be know what they have in Keith yet, but hopefully this match showed them something. He is incredibly gifted. Lars looked good in this match and the result was to be expected when you know that Lars is moving up to the main roster shortly. I can’t say I agree with the decision to move him up, but how often do we actually agree with call-ups? I would love to see more from these guys with more time.

I want to apologize for the delay this week, but I’ll hopefully be back to normal for next week’s episode. That’s it for this week, so until next time… don’t do anything I wouldn’t do, but if you do, name it after me!