Talking Smack begins with our usual hosts, Kayla Braxton and Paul Heyman. Kayla gives her co-host a compliment on his attire which Heyman wondered why it took so long for her to realize. Heyman jokes that she finally got Lasik to realize how good-looking he is and will not go on a date with her. Moving on to Elimination Chamber, Kayla spoke about Roman Reigns retaining his championship. With that, the main event at Wrestlemania will be Edge versus Roman Reigns for the Universal Championship. However, Kayla mentions that on Smackdown, it looks like Daniel Bryan is after the Universal Championship. When asked if Roman is nervous about his main event spot, Heyman remains quiet for a few seconds before crumbling a piece of paper and tossing it away. Heyman says Roman sweats no man and that the champion is THE Wrestlemania main event. Heyman adds that Daniel Bryan can wish and dream about a match against Roman Reigns but it will not happen because Roman is locked in against Edge. Kayla announces that Daniel Bryan will be a guest for Talking Smack later on.

Aneil’s Take: Funny opening between Heyman and Kayla Braxton. Again, I just feel more at ease watching Talking Smack than Raw Talk. Got to love Paul putting over his Tribal Chief, saying he does sweat anyone. Interested to hear what DB has to say after what happened at Elimination Chamber and on Smackdown.

The first guest of Talking Smack is Seth Rollins. Rollins gingerly takes a seat after getting swung around by Cesaro on Smackdown. Rollins says while it was a series of unfortunate events, everything is great now. Looking back at his Smackdown segment, Rollins says Cesaro interrupted him. Rollins claims he tried to offer Cesaro some guidance but ends up getting repaid with a swing from Cesaro. When asked about his thoughts of ‘The Swiss Superman’ having no killer instinct, Rollins says he is still here so it shows Cesaro has none. Rollins believes without his help, Cesaro most likely not find that killer instinct. Heyman tells Rollins that he agrees with his comments and then talks about Reigns watching Rollins’ media appearances. Heyman says Reigns was flattered by Rollins’ kind words but brings up Cesaro being in this dangerous zone as of late. Heyman refers to Rollins as a “visionary” but has concerns that Cesaro can disrupt this vision. Rollins says he believes in Cesaro’s potential but thinks Cesaro wants to go about it the hard way. Rollins sends a message that Cesaro will learn one way or another and that he did not want it to be this way. Assuring Heyman that all will be ok, the special counsel shakes Rollins, thanking him. After the interview, Heyman reveals that his lower back was killing him throughout the day but when he shook Rollins’ hand, he suddenly started feeling better. Heyman ends, saying there is something special about Rollins.

In my capacity as #SpecialCounsel to the #TribalChief@WWERomanReigns, I keep an open mind to all those who can benefit @WWE#Smackdown and the #IslandOfRelevancy.

Ladies and Gentlemen, I can attest.#EmbraceTheVision#TalkingSmack@WWERollinshttps://t.co/NhEaioJUfV

Aneil’s Take: Great storyline development with Rollins talking about wanting to help Cesaro but his guidance being refused. I like the narrative of Rollins showing that he is innocent and merely trying to help Cesaro trying to bring out the killer instinct from him. For me, the issue with Cesaro is similar to Apollo Crews. They are both tremendous wrestlers but they need to work on their character. Nice little touch by Rollins selling the Giant Swing as he made his way on the set. Hilarious part by Heyman saying his back pain mysteriously healed after shaking Rollins’ hand.

The next guest is “The EST of WWE” Bianca Belair. An elated Belair starts dancing on the table, saying she choose Sasha Banks. Thinking twice about interviewing on the desk, Belair is helped down by Heyman. Bianca says while Asuka is a great champion on Raw, it felt right to pick Sasha Banks as her choice. Knowing how big Wrestlemania is and wanting to make it bigger, she chose Sasha Banks since it would be historical having two African American women main eventing Wrestlemania for the first time ever. Kayla asks Bianca if this has all settled in yet. She reveals she was shaking in the ring while making her announcement because of the importance of her decision. On the decision of her opponent at Wrestlemania, Belair says Banks was on her map because of what “The Boss” has accomplished here so far. Bianca says it is not out of jealously but inspiration because she wants to achieve what Sasha has. “The EST of WWE” adds that she is looking to become Smackdown Women’s Champion and wants to prove herself by walking out of Wrestlemania as champion. Heyman shakes Bianca’s hand, congratulating her and saying she earned every bit of it as the interview concludes. Post-interview, Heyman says he did not have much to say because he has spoken to her as a challenger, and looks forward to talking to her as a champion. 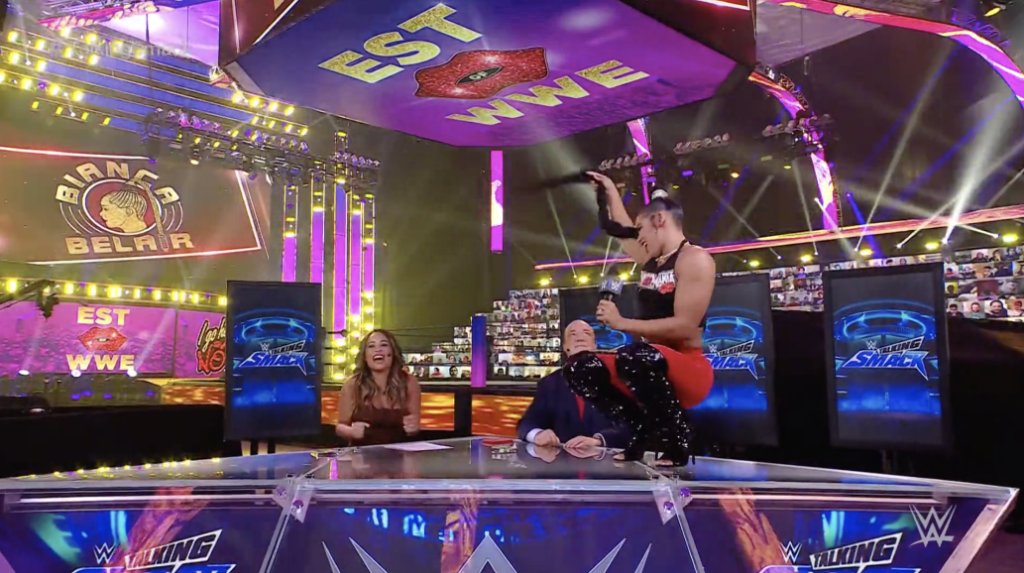 Aneil’s Take: I said it before and I will say it again, I think Sasha Banks versus Bianca Belair should close out Night 1 of Wrestlemania. I think it would show fairness in having the Women’s Rumble winner close out at least the first night of Wrestlemania. Also, you have so much star power in this match. In one corner, you have the megastar in Sasha Banks and then in the other, one of the fastest rising stars on Smackdown in Bianca Belair. I did wonder why Paul did not speak during the interview but his explanation was excellent. He said he told her what he needs to as a challenger and looks forward to talking with her as a champion.

Before Kayla can introduce the final guest, Heyman says the show is over. However, much to Heyman’s dismay, the final guest for Talking Smack is Daniel Bryan. Bryan jokes that he knew Heyman did not want him on because he would bring up Paul having a mullet in the 80s and doing the same dance that Bianca did. 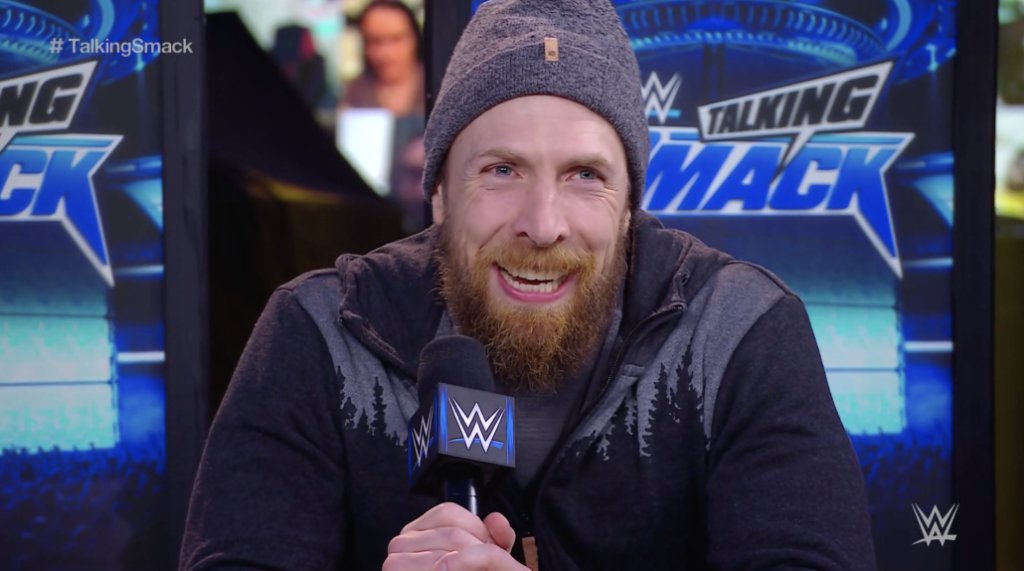 When asked how he feels after Smackdown, Bryan wanted to talk about Elimination Chamber instead. Bryan says while he won an Elimination Chamber match for the third time in his career, at the end of Sunday, he did not feel like a winner. Bryan reveals that over the last year, he has taken a step back because he wants to give a chance to others in the locker room because of the talent he sees in them. Unfortunately, after winning the Chamber match, he would quickly lose to Roman Reigns. Bryan says he is alright with losing, but when Edge speared Roman and pointed to the sign, that is when he felt like an absolute failure. It seemed to bother Bryan knowing that the Wrestlemania main event features “two guys who have a total of three matches this year”. He then spoke about a personality test which the company gave a few years back which he scored in the 1% percentile for lowest ambitions. When the test proctor as how did he achieve so much, Bryan answer that he loved what he does which is why he succeeded. However, to have Edge and Reigns going into the main event, after wrestling more matches than two combined, makes himself feel like a failure. Kayla asks if Heyman had any comments which the special counsel says he will make Bryan’s day.

Heyman informs Bryan that he has the opportunity of a lifetime for him. He has been authorized by Roman Reigns to make the offer to Bryan for a Universal Championship match at Fastlane. However, Bryan will have to beat Jey Uso in a match on next week’s Smackdown. If Bryan wins, Reigns will grant the title shot at Fastlane. But if Bryan loses, then he will have to acknowledge Roman Reigns as his Tribal Chief. Bryan tells Paul that he will take him up on the offer. And if Bryan loses, he swears he will acknowledge Roman as his Tribal Chief and even shake his hand. To make things fair, Bryan adds that he wants the match to be in a steel cage. A troubled look formed over Heyman as Bryan and Braxton chant “Steel Cage match”. Heyman says he is not authorized to accept any stipulation as Bryan talks over him, saying this might expose Roman for being a “coward”. However, Heyman looks to his phone, apparently reading a message from Reigns. Heyman informs Bryan that he has been authorized that the Steel Cage match will happen next week. Bryan says he has a message for Reigns and that is he will no longer put himself on the back burner or anyone ahead of himself. Bryan tells Heyman he is going out to take what belongs to him and says he going to take what he had before CM Punk as being “the best damn wrestler in the world”. Heyman sits there, in anger as Kayla closes out Talking Smack.

Aneil’s Take: Great interview here with Daniel Bryan, especially talking about Edge and Roman being in the Wrestlemania main event. I thought it was interesting to hear Bryan not being upset over losing at Chamber but more of seeing Edge and Reigns being in the main event spot. Before Edge won the Rumble, I thought it was a guarantee that Bryan would be facing Reigns at Wrestlemania especially with his full-time career coming to a close soon. While Edge’s part-time situation is different, there will always be the argument of part-timers coming back to take Wrestlemania spots from full-time guys who believe they deserve it. Also, got to love Jey Uso being featured in the main event spot more often. Never thought he could be such the breakout star he has been right now. Outside of that, the one eyepopping moment at the end of the mention of CM Punk. Does Punk receive royalties anytime his name is mentioned?

Once again, Talking Smack is so much better than Raw Talk. They do such a great job of asking questions and making points that are related to the guest and their storyline. I mean just look at the last segment, we were able to set up the main event for next week’s Smackdown instead of goofing around with no direction. Also, Mr. Heyman, if you ever read this, I hope one day I have the opportunity to meet you and tell you how much of a genius you are.