Welcome to the WWE NXT review here on TJRWrestling. Last week’s Halloween Havoc show and I’m unfortunately not feeling very well this week. I’ve had a lot going on in the last week from my birthday to helping somebody move, which caused a bit of an injury and it’s just tough to sit here writing about a show as usual. I need a bit of a break. Due to that, I’ll just post a quick review after I watched it this afternoon with thoughts on the results of NXT this week.

This is episode #429 of WWE NXT. It took place at NXT’s home called the Capitol Wrestling Center at the WWE Performance Center in Orlando. Check out my past WWE NXT reviews right here.

The announce team was Vic Joseph and Wade Barrett at the CWC while Beth Phoenix was home in North Carolina.

It was a long match where Kai worked over Moon’s left shoulder for a lot of it. Moon made the big comeback, then Gonzalez did a distraction and Kai got the win with a jumping kick to the face. The feud will probably continue from there. They got about 15 minutes here.

Grimes was doing a lot of his comedic selling during the show after being scared by Dexter Lumis last week. That played a part in the finish of this match with Grimes being scared from events from last week and Kushida finished him off with the Hoverboard Lock submission. They went 15 minutes.

Drake Maverick and Killian Dain vs. Ever-Rise was a No Contest

They only went about three minutes when Pat McAfee, Pete Dunne, Oney Lorcan and Danny Burch attacked for a No Contest finish. McAfee’s group were calling themselves the Kings of NXT, so I guess that’s the official name. The group took a selfie, but as you can see below, Pete Dunne is not the smiling type.

"Smile if you're the greatest 4-man in wrestling history!"

There was a promo from the Kings of NXT group where they burned an Undisputed Era flag. When they left, Killian Dain tried to attack, but he was beat up by the group and Dunne kicked a car door into Dain’s head. That should set up a Dunne match against Dain soon.

A video aired with Johnny Gargano at his home talking about being NXT North American Champion.

It was a competitive, back and forth match between two babyfaces. Shotzi challenged Toni because Shotzi hosted Halloween Havoc last week, so she got to pick a match this week. Strom got the win after about 14 minutes. It was not a decisive win. It was more of a creative pinfall move.

After the match, Candice LeRae was in a truck and she drove over Shotzi’s “tank” that Shotzi uses as part of her entrance. Shotzi was devastated by it.

It looks like Jake Atlas is still going after Legado del Fantasma because he went after them in the parking lot with Santos Escobar and friends driving away.

Timothy Thatcher had one of his training sessions. The guy that gave him problems last week was back, so Thatcher left.

Xia Li said that the letters she has been given are from her family and she needs to start winning matches. William Regal showed up to inform her that she has to face Raquel Gonzalez.

Rhea Ripley was featured in a video saying she wants a one on one match for the NXT Women’s Title, so she’s coming for champion Io Shirai. The next Takeover is in one month, so it would make sense to do Shirai vs. Ripley there.

Next week on NXT: 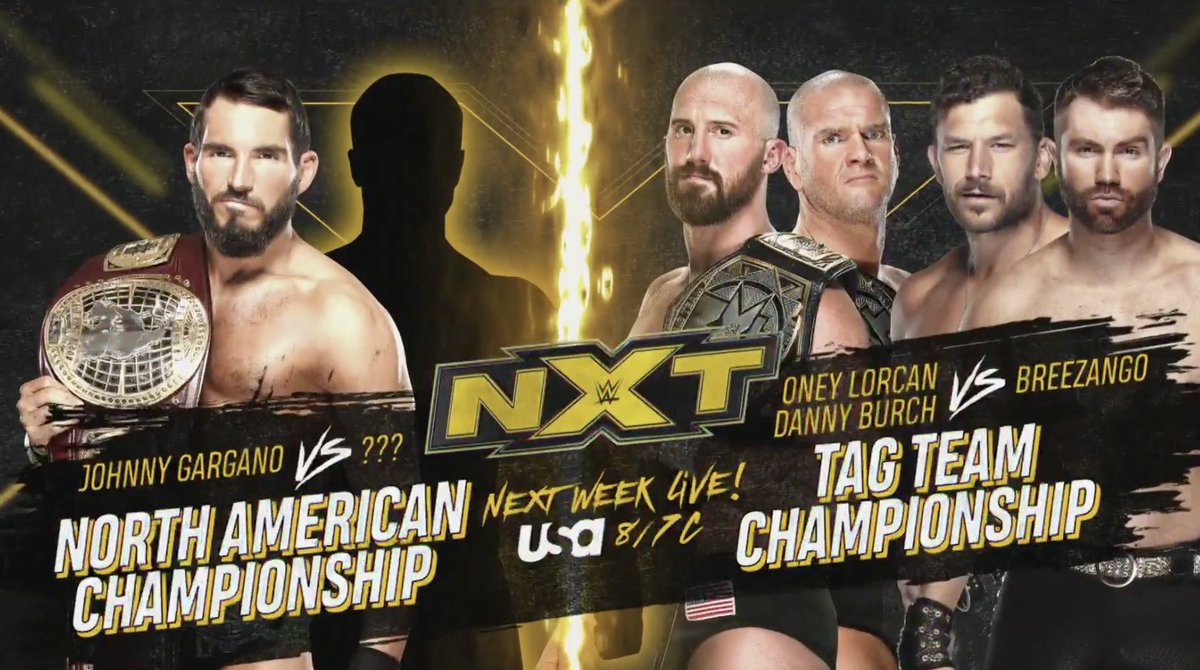 The story of the match was Ciampa working over Dream’s arm that was in a cast like it has been for several weeks. Dream tried to cheat with a chair, but the referee got rid of it and Ciampa finished him off shortly after that. Ciampa hit the Willow’s Bell followed by the Fairytale Ending for the win. It went about 13 minutes.

Here’s a great speech from Ciampa after the show where he talked to the fans about what NXT means and how they’re excited about performing in front of a crowd again in the future.

A very good show just like last week with entertaining matches from top to bottom. There wasn’t one match that stood out more than everything else although I liked Moon/Kai a lot as well as Ciampa/Dream. I really like the way Pat McAfee’s “Kings of NXT” heel group has been booked as well and so far they haven’t really been beaten up at all. They look strong, which is good to see. The women’s division continues to be a strength of NXT as well.

Sorry for not doing a longer, more proper review. Hopefully I can return to normal next week.