The hardest thing about doing a list like this is not the order, it’s the Chris Benoit story. Since Chris Benoit killed his wife and son before killing himself ten years ago, he has been blacklisted from WWE, which is something I agree with. While WWE won’t mention Benoit anymore, they haven’t edited out his content on WWE Network.

When it comes to this list, I find it impossible to completely ignore Benoit. He’s going to appear on this list a few times. When his matches come up, I’m going to write a lot less about him because frankly it’s still tough to write about him.

I hope you understand my decision to include Benoit matches. I realize that some people can’t even watch his matches after what he did and I totally understand that. I’ve been able to watch his matches, but it’s hard to get emotionally attached to them like I did when he was a favorite of mine. Here’s a closer look at Angle vs. Benoit at WrestleMania 17.

If you’ve missed anything in the countdown so far, the WrestleMania’s Greatest Matches archives are here.

Where: Astrodome in Houston, Texas

Kurt Angle was the WWE Champion heading into 2001. He ended up dropping the WWE Title to The Rock in a great match at the February 2001 PPV event called No Way Out. Following that event, we didn’t really know what he might do at WrestleMania.

The match was set up with a promo on Raw with Angle in the ring talking about how great he was and Benoit interrupted. It led to them talking trash about who was the better man. They had some matches before this – including a triple threat at the previous WrestleMania with Chris Jericho, but this was clearly their biggest match to date.

It was a good idea to put them together since Angle was a former WWE Champion while Benoit was a popular upper midcard face.

What I Thought Back Then

I was excited. Angle was really turning a corner by this point as one of the best all around performers in WWE. Looking back, it’s hard to believe he was so good without that much experience, but he really was a special talent.

Benoit was always a guy I rooted for because he wasn’t pushed strong enough in WCW. When he got to WWE a year before this, there were definitely a lot of fans wondering if they were going to use him right or if he would struggle to get over as much as he should.

Here’s my full review of the match plus the analysis, which was written in 2012. 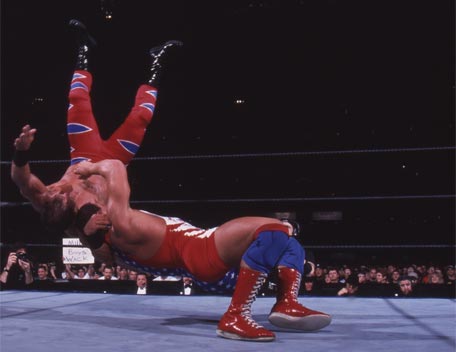 Kurt Angle made his entrance. He was a heel and was the World Champion from October to February until he lost the title to The Rock at No Way Out. He needed a WrestleMania opponent, so Chris Benoit challenged him and the result was this match. It was time for the show to become great. Pre-match, Angle cut a promo ripping on Texas. Best part was when he said: “Lose the freaking cowboy hats. You’re not seven years old anymore. Please!” Benoit got a good reaction coming out. I was so excited for this match because they were two of my favorites and it was their first PPV singles match.

The first few minutes saw some tremendous mat wrestling with each man going for holds and the other countering it. When they broke, the crowd applauded. It happened again. They continued to exchange holds on the mat until Benoit attempted a Crossface and Angle made the ropes. Angle went to the floor out of frustration. Angle decked Benoit with a cheap punch to the head as Heyman said Angle was making this a brawl. Angle whipped Benoit back first into the steel steps. In the ring, Angle hit some suplexes on Benoit. Benoit fought back with chops, but Angle slowed the momentum down with two belly to belly suplexes. Crowd reacted well to everything in the match. Clothesline by Benoit as both guys were down.

After a chopfest, Benoit hit a knee to the stomach and then a back elbow for two. Suplex by Benoit. Benoit hit a superplex for two. Rolling German suplexes by Benoit. After the second one, Angle tripped hi up and went for an Ankle Lock. Benoit countered the Ankle Lock into an Ankle Lock of his own. Angle kicked out of it and Benoit put him in the Crippler Crossface, which Angle countered into a Crossface of his own. What an amazing technical wrestling sequence this was. Heyman: “I have never in my life seen a greater display of holds and counter holds than I have tonight between Kurt Angle and Chris Benoit.” Well said. Angle went for the Ankle Lock again, Benoit kicked him off and Angle hit the ref, which knocked the ref down. Crossface by Benoit. Angle was tapping. Crowd was cheering loudly. No ref. Angle back up and he hit the Angle Slam. Ref recovered to count the pin for a two count. I remember thinking that was it. Angle hit a body slam and then he went up for a Moonsault, but Benoit got his knees up to counter it. Benoit went to the top rope and hit the flying headbutt that earned him a two count. Crowd thought that was it. They were popping for everything. Benoit grabbed a waistlock, Angle hit a low blow that the ref didn’t see because it was a backwards kick. Benoit pinned him after a take over, Angle reversed it, he grabbed the tights and won via pinfall thanks to the tights grab. Match went 14:02.

Analysis: ****1/4 This was like the 2000’s version of Steamboat/Savage at WM3 or Hart/Hart at WM10. It was straight up wrestling save for that little brawl out on the floor. I loved how they told a story from the opening minutes of freestyle wrestling to the point where Angle decked Benoit because he was frustrated. That’s the perfect way to portray a heel. I also enjoyed the parts where Benoit put the Ankle Lock on Angle and Angle put the Crossface on Benoit. The counters were believable and the crowd was reacting positively to everything. The reason this match wasn’t higher rated is because of the ref bump and the finish could have been better executed. The finish was done like that to build to rematches at Backlash and Judgment Day, though, so in hindsight the finish made a bit more sense. If you want to see the best Angle/Benoit match seek out their match at the 2003 Royal Rumble because that was a five star match.

You can read my full recap of WrestleMania 17 right here.

It was tough to find Angle comments about it, so I’m going to skip this part for this match.

What I Think Now

It’s amazing to see how great Angle was when he had only been on WWE’s main roster for about 18 months at this point. He made everything look so easy as he mixed in technical wrestling with speed and he was aggressive too.

I have seen the aforementioned Royal Rumble 2003 match more than I have seen this match. It’s fair to say that they took what they did here, improved on it and had better matches as they got more familiar with eachother.

The result of the match didn’t really matter. I figured Angle would go over since he was the former WWE Champion

They had a lot of matches together for the next several years. There were matches at the next two PPVs after this as well. In late 2002, they became tag team champions on the Smackdown brand even though they argued a lot. If you want to check out their best match, I recommend Royal Rumble 2003. If I ever did a list of the best WWE matches ever it would be in the top ten for sure and maybe the top five. It’s definitely a five-star match.

Angle went on to become a regular part of WWE’s main event scene over the next five years of his career in WWE. He had a lot of great rivals as a heel and a face. I think Benoit was arguably the best of them all just based on how many matches they had.

As for Benoit, his big breakthrough was three years after this at WrestleMania 20 in 2004. That match will be covered later in the countdown.

I liked watching the match again although it’s difficult to enjoy Benoit matches the way I used to for obvious reasons. If you can try to forget about that for 15 minutes and appreciate the good in-ring work then you can still enjoy this match.

If you’re wondering, this is the first of three WrestleMania 17 matches that will be on the countdown. Best WrestleMania and WWE PPV ever.