Welcome to this special one match NXT UK review. I don’t review NXT UK regularly. I’ll admit that I don’t even watch it every week because I watch a lot of wrestling in the week in terms of current shows that I review and retro content, along with all of the other writing that I do. My plate is full, so to speak. If I do watch NXT UK it is usually while I’m sitting on the couch relaxing and watching a show without reviewing. When we had an NXT UK reviewer on the site, he did a great job, but the views were so low that it told me that the interest in this fourth WWE brand was pretty low. The reality is the average wrestling fan can only take so much pro wrestling in their life. For this one match, I thought I would review it because frankly I read/heard a lot about how amazing it was, so I had to check it out.

This match is between NXT UK Champion WALTER and Ilya Dragunov as the challenger. Walter has been the champion for 573 days going into when this match aired. It was taped at the most recent NXT UK tapings. The match was rated five stars by Dave Meltzer in this week’s Wrestling Observer Newsletter, which is high praise for sure.

The NXT UK tapings took place at an empty BT Sports Studios with no crowd. The announcers are Andy Shepherd and Nigel McGuinness. There are some people in the building making noise, but not like it’s a regular crowd.

Ilya Dragunov made his entrance as the challenger. He is from Moscow, Russia. Walter was up next as the long-term NXT UK Champion and he’s from Vienna, Austria. Dragunov earned this title shot back in April after winning a battle royal. There was a long delay to having the match due to NXT UK tapings being on hold due to the COVID-19 pandemic. Since they returned to tapings recently, it’s time for the match.

Dragunov charged with a kick, Walter came back with chops and kicks to the chest. Dragunov with a chop, Walter with a boot. Dragunov avoided a Powerbomb, then a forearm and a running knee that knocked Walter down. Dragunov went to the top rope, he had to fight Walter off to put him down and Dragunov hit a senton splash onto Walter. Dragunov charged, Walter caught him and Walter hit a suplex that dropped Dragunov on his head in as safe a manner as possible. They exchanged chops, Walter kicked him in the back, Dragunov with slaps and chops. Walter blocked a chop, then whipped Dragunov hard into the rips so that Dragunov took the bump on his neck. Ouch. Walter rocked Dragunov with multiple forearms to the face. Walter with a knee drop to the face. When Dragunov went for a suplex, he couldn’t do it and Walter hit him with a forearm to the back of the neck. Dragunov tried to fight back, but Walter hit him with another hard slap to the chest. Walter wrenched on the head/neck of Dragunov. They exchanged chops/slaps again and Walter stomped on the head/neck of Dragunov along with a move where Walter used his feet to twist the neck of Dragunov. Walter hit a release German Suplex across the ring. Walter continued to wrench on the head/neck of Dragunov and step on the neck. Dragunov got back into it with chops, but then Walter crushed him with a huge chop. That sounded brutal. Walter set up Dragunov on the top rope, more hard chops and Walter stretching Dragunov across the top. Walter sent him to the floor as we could start to see visible red scars on the chest of Dragunov. Walter stepped on the neck of Dragunov across the apron. Walter set up Dragunov against the ropes, Walter with some hard chops to the back and Dragunov kept on fighting back with repeated punches to the chest. Walter came back with a boot to the face leading to Dragunov hitting a German Suplex. Dragunov was grabbing the neck, so Walter hit a clothesline to the back of the head and Dragunov came back with another German Suplex! Wow. They exchanged forearms to the face and Dragunov hit another German Suplex! Stephens: “Dragunov is not human!” A good way of putting over his willingness to fight. Dragunov with a leaping kick, then two enziguri kicks and Dragunov hit a delayed German Suplex for a two count. McGuiness talked about how this was like the Golden Era of Japanese wrestling and he’s right about that.

Dragunov attacked with punches and stomps to keep Walter down. Walter came back with a kick along with a chop. Walter with a forearm to the side of the head. That sounded brutal! Dragunov with a hard chop to the chest, then a clothesline and Walter slapped on a sleeper, but Dragunov got to the ropes. Dragunov with a rollup, he tried a bridge, Walter with a sleeper again with Dragunov countering into a two count. Dragunov got some momentum off the ropes leading to a stiff clothesline for a two count. When Dragunov charged again, Walter swatted him with a hard slap to the face. McGuinness was saying this was unlike anything he had ever seen. Walter with an arm wringer leading to another hard chop to the chest. Walter picked up Dragunov again just so he could chop him again to knock him down. Dragunov fought back with punches, but then Walter hit a huge clothesline and a Powerbomb got a two count. Walter bounced off the ropes leading to a huge clothesline for two. Walter grounded Dragunov with a dragon sleeper on the mat to keep Dragunov down, but Dragunov rolled towards the ropes to break it. Walter with a kick to the back, Dragunov with punches, they locked hands and Dragunov hit some headbutts. Dragunov with knee lifts to the chest followed by a double chop to the back of the neck. Dragunov went up top and hit a missile dropkick for a two count. Nigel: “You’ve gotta be kidding me!” It was just a missile dropkick, but still a good nearfall. Shepherd: “This is brutality like we have never seen.” Walter and Dragunov were speaking in some foreign language, more chops exchanged and Dragunov with three clotheslines to the chest. Dragunov tried to lift Walter and managed to hit a slam for a two count. Dragunov was bleeding from the mouth while also dealing with heavy scarring on his chest. Dragunov with a hard chop to the chest and the back of the head. Dragunov hit the running forearm to the back of the neck, but Dragunov was too hurt to make a cover since Dragunov was selling the neck injury. Dragunov tried to charge, then he collapsed while grabbing the neck, but then Dragunov charged and hit a running knee to the face for a two count. Walter went to the floor, Dragunov followed and Walter hit a head/arm suplex on the floor, so that’s another bump on the neck. Walter kicked Dragunov back first into the steel steps. Walter with a Powerbomb on the ring apron to work on the back/neck again. Walter with a Powerbomb in the ring. Walter jumped off the top with a Superfly Splash for one…two…and no because Dragunov kicked out! Nigel: “Oh! Come on!” Walter beat on Dragunov with vicious elbows across the face and then a sleeper with a body scissors on the mat. Dragunov looked like he had passed out, so the referee called for the bell. It went 25:10.

Post match, both guys were down on the mat selling the physicality of match. Replays aired after that. Nigel goes: “This was the damndest thing I have ever seen in my life.” Well said.

Analysis: ****3/4 This was an excellent match. I’m not going five stars, but it’s really close. It’s right there for sure. Maybe it needed a bit more to get there and maybe without a crowd it was hurt a bit by that because if there was a crowd this would have been even more fun to watch. That’s not the fault of the performers, though. Amazing performance by both guys It was so physical and brutal the whole way. It’s one of the most hard-hitting matches in WWE history, no doubt about it. Dragunov was selling the neck for most of it after bumping into the ropes, Walter was merciless in his attacks against the neck and I really admired the way that Dragunov kept on fighting back. There were several believable nearfalls for both guys, especially Dragunov, who probably got more nearfalls in the match. Most of the match was contained in the ring until they went to the floor near the finish with Walter hitting the head/arm suplex, the kick into the step, the Powerbomb on the apron and then Walter finished off Dragunov in the ring. When the announcers mentioned the Japanese strong style of wrestling it certainly was a valid point because that’s what it reminded me of too. I don’t know how many chops there were or how many shots to the back of the neck, but this was as rough of a match as I’ve seen in a long time. The thing is also that Walter’s a nearly 300-pound guy delivering these blows, so it’s not a surprise that Dragunov had those welts on his chest plus a bloody nose. My favorite Walter match in WWE remains the classic with Tyler Bate from August 2019 (the Alex Podgorski review is here), but this is still awesome. Great job by the commentary team of Shepherd and McGuiness too. They were really into the match and that always helps.

I will definitely be re-watching this match and considering it as a contender for WWE Match of the Year in 2020. It was special. Please check it out if you can. 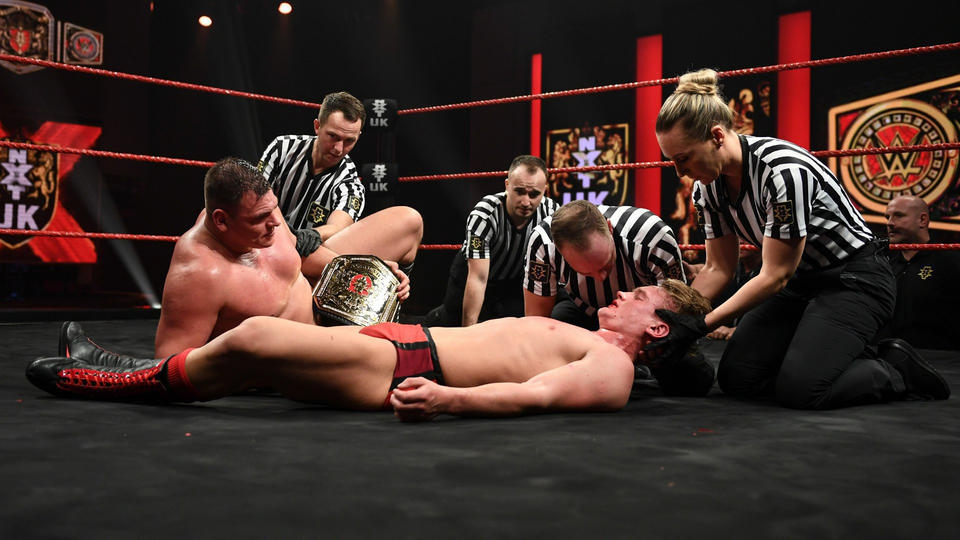 Walter was back to his knees while cradling the NXT UK Title. Referees checked on Dragunov, who was still selling like he was knocked out. The show ended with Walter slowly walking to his feet while Dragunov was helped to his feet.

One of the most physical fights in a @WWE ring. If you haven’t seen this #NXTUKTitle match…go watch it NOW on @WWENetwork!!! #WeAreNXTUKhttps://t.co/MWsVdCjbJ5