Live from Memphis, Tennessee, this is 205 Live for episode #140. Follow me on Twitter @johnreport. Please visit TJRWrestling.net daily for our regular updates on the wrestling business featuring WWE news coverage along with reviews about wrestling’s past and present.

The opening video package aired showing the history between Drake Maverick and Mike Kanellis leading up to their main event match.

The commentary team for 205 Live is Vic Joseph, Nigel McGuinness and Aiden English. 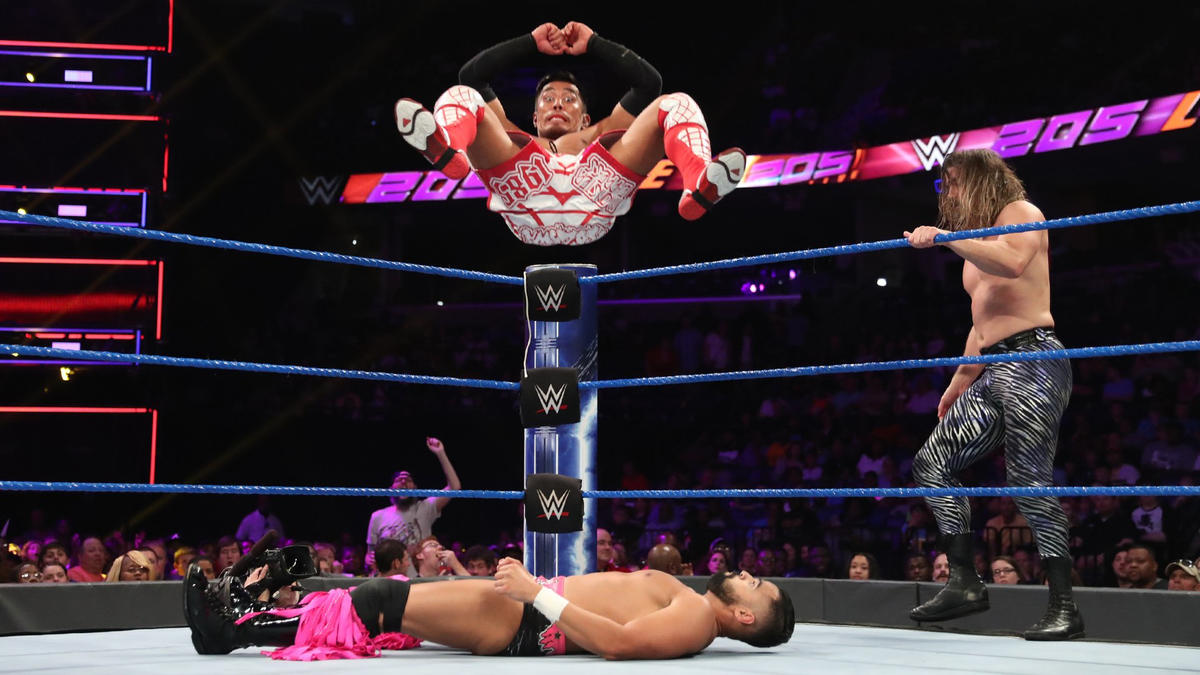 Akira Tozawa and Brian Kendrick vs. Samir and Sunil Singh

Tozawa worked over Samir with punches, Kendrick tagged in with a double team hip toss and Tozawa with a senton splash on Samir. Kendrick and Tozawa hit a double team move on Samir with a kick by Tozawa. When Tozawa was legal, he ran the ropes, Sunil tripped him up and the Singhs took over. Tozawa was grounded with a headlock, he fought back and Samir hit him in the back to knock him down again. Sunil tagged in leading to a double team whip into the turnbuckle. Sunil with a running splash on Tozawa and Samir tagged in with a headlock. Tozawa was whipped into the corner, he avoided an attack and hit a jumping spin kick along with an enziguri kick. Kendrick got the hot tag with clotheslines, high back elbows and a forearm smash. Kendrick with a jumping kick to the face of Sunil for two. Samir grabbed the Bollywood Award that was on the announce table. The referee was distracted by Tozawa, Sunil charged with the award, Kendrick moved, so Sunil hit Samir by mistake. Kendrick hit Sliced Bread off the ropes and Tozawa got the tag. Tozawa went up top and hit the Senton splash off the top rope for the pinfall win after six minutes.

Analysis: ** It was a decent tag team match with the crowd not reacting to much until the finish. Tozawa’s offense is fun to watch. The Singhs try hard with their Bollywood gimmick, but the crowd just doesn’t care.

A video package aired about Humberto Carrillo. They have aired videos with him in the past, so it was a nice way to inform the viewers about what he can bring to the table. Carrillo said he wants to face Drew Gulak for a shot at the Cruiserweight Title. Carrillo said his family is made up of professional wrestlers, none of them have ever won a title in WWE, so he’s going to be the first.

Lince Dorado and his Lucha House Party teammates were influenced by Sarah Schreiber. Kalisto talked about they tore the house down last week with Carrillo and Mendoza. Lince Dorado said they are on the rise and didn’t seem to like Kalisto talking about Carrillo and Mendoza while adding if he was in the match, they would have won. Dorado said let’s go have some fun because he has a match.

Dorado’s buddies Kalisto and Gran Metalik appeared in the arena, but then they went to the back when the match began. 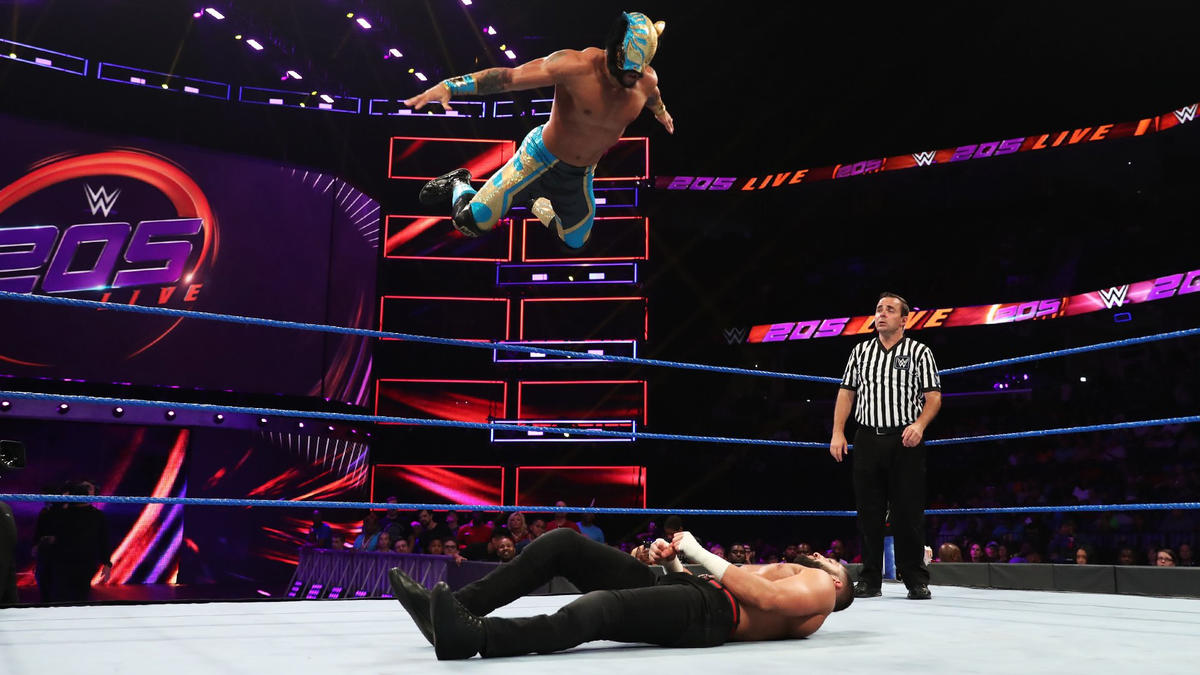 They did some mat wrestling that included counters from both guys, then Dorado went for a move, but Daivari left the ring to avoid it. Daivari turned to walk away, so Dorado stopped him and sent Daivari back towards the ring, which led to Dorado hitting a moonsault off the apron onto Daivari on the floor. Back in the ring, Dorado did a springboard splash for two. Dorado with a dropkick, then he went up top and Daivari shoved him all the way to the floor. Daivari took control back in the ring with a headlock, Dorado broke free and Daivari hit a reverse DDT for two. Dorado fought back with punches followed by a cross body block off the top for two. Daivari came back with a DDT to take control again. Daivari took way too much time on the middle ropes, he mocked Jerry Lawler’s fist drop and Dorado got the boot up to block Daivari’s leaping attack. Dorado with a hard chop to the chest, Daivari to the floor and Dorado hit a springboard cross body block off the top onto Daivari on the floor. They battled on the apron, Dorado with a boot to the face, he jumped off the top and Daivari came back with a superkick for a two count. Nice counter move to set up a believable nearfall. Dorado went for a springboard attack, but Daivari caught him and Dorado rolled through for a two count. Daivari came back for a Rock Bottom-like slam for another two count. Daivari put Dorado on his shoulders, Dorado broke free, rolling kick to the head and Dorado rolled through into a bridging pin for the victory after ten minutes.

Analysis: *** Good match that started slow, but then the action really picked up. They made the most of their ten minutes with Dorado hitting a creative pinning move for the win. I would have liked to see even more of the aerial style of Dorado. The moment where he did do big moves got the crowd into it and I think if he did a big move for the finish, it would have helped the match. Daivari is one of the better true heels on the 205 Live roster. Dorado doesn’t get to wrestle in singles that often, so it was nice to see more of what he can do.

When they showed replays of the finish, McGuinness said that Daivari’s shoulder may have been up with English noting that it is the referee’s call. Dorado celebrated with his LHP buddies.

Mike Kanellis was backstage getting ready for his match with pregnant wife Maria holding her 24/7 Title beside him. She left.

A commercial aired for SummerSlam on August 11 with a focus on the Brock Lesnar vs. Seth Rollins match.

Drew Gulak, the Cruiserweight Champion, did a promo saying he is supposed to defend his title at SummerSlam, but he doesn’t know who his opponent is. He said he’ll watch the main event and if Mike Kanellis wins then he might face him. If not, then he’s all alone again. Gulak said that whoever faces him at SummerSlam will have to deal with pain and punishment.

Analysis: It was a good way to set the tone with Maverick getting his ass kicked, yet he refused to give up. Maverick is a trained wrestler that doesn’t wrestle in WWE regularly, but this story was built well and it’s a fitting main event for this week. 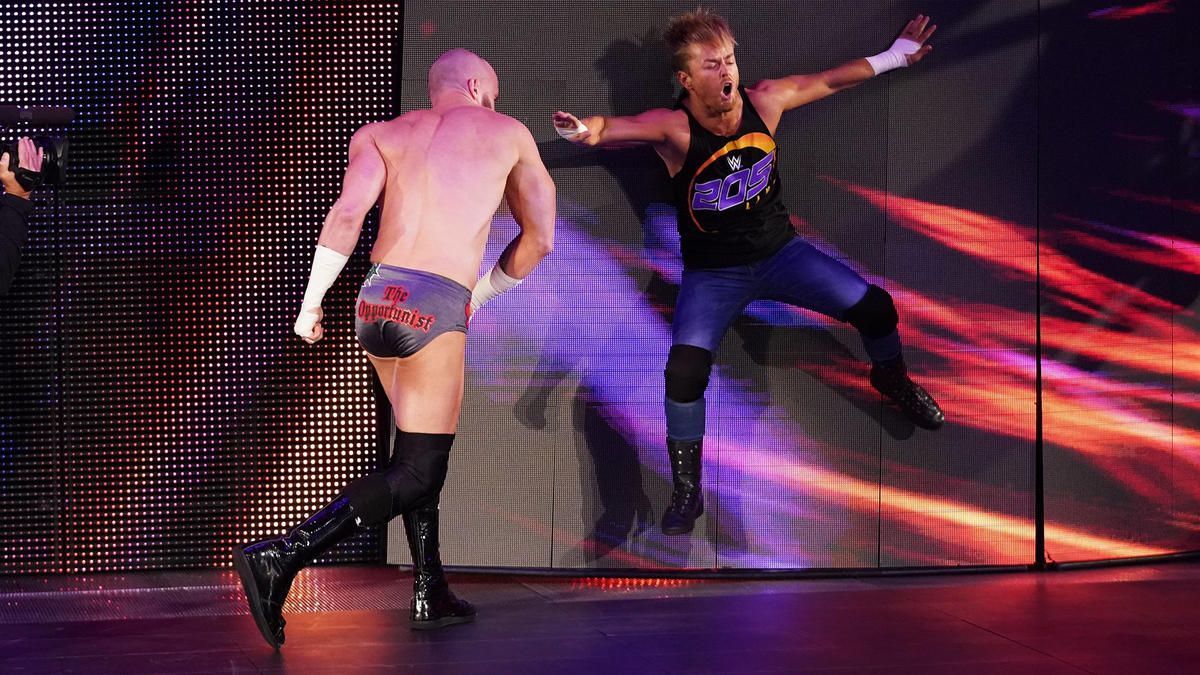 Maverick got the belt and it was payback time as he hit Kanellis in the back a few times. The fans popped for it. Maverick hit a suicide dive that put Kanellis onto the announce table. The fans were chanting “Drake” for Maverick as Drake hit a DDT onto the announce table, which did not break. Maverick went into the barricade, he jumped off with an elbow onto Kanellis on the table, but Kanellis moved and Maverick’s elbow hit the table. Kanellis sent Maverick back into the ring, he teased going for his finisher, but then he looked at the turnbuckle instead. Kanellis set up Maverick on the top rope, he teased a Razor’s Edge off the middle turnbuckle, but Maverick reversed it with a hurricanrana. It was not done perfectly although Kanellis sold it the right way. Maverick hit the Dudley Dog (Spike Dudley’s finisher) that was a bulldog after a walk up to the rope and he covered for the pinfall win after 16 minutes.

Analysis: ***1/4 It was a fun match that came across as more of a fight due to the rules. Kanellis dominated most of it until Maverick got some momentum leading to the upset win. The fans really got into it. The result surprised me a bit because I thought Kanellis would win, but I guess they opted for the babyface win rather than give Kanellis a title shot. Considering it was an Unsanctioned Match, they didn’t use a lot of weapons although the crowd did react to the belt shots, so that worked at least.

After the match, they showed Maria Kanellis watching with her 24/7 Title and she looked disappointed about her husband Mike losing the match.

Maverick had his hand raised as the winner, so that meant that Kanellis wasn’t going to be granted a title match. Kanellis was frustrated about the loss. Maverick celebrated the win some more as the show ended there.

Analysis: It will be interesting to see if Maverick wrestles more on 205 Live because the crowd was invested in this match. The storyline helped for sure, but clearly, Drake is liked by the fans and it wouldn’t surprise me if he wrestles more often. I think Kanellis has done good work as a heel over the last few months.

Three Stars of the Show

It was a slightly above average episode of 205 Live with a strong main event match. The opener wasn’t an exciting match while the middle match was fine. They had been building up Maverick/Kanellis for several weeks and it ended in a happy way with Maverick winning, so I think that’s enough to make loyal 205 Live viewers happy.

We still don’t know who is going to challenge Drew Gulak for the Cruiserweight Title at SummerSlam with one more episode of 205 Live left. I’m going to guess that they will do some 4-Way match to help determine the next challenger. It might be Humberto Carrillo just based on the way he has been pushed in video packages and in the matches he has had. Your guess is as good as mine on that one.