Welcome back to the weekly WWE NXT UK review here at TJRwrestling. Last week, they had an average show, with the main event I Quit match between Toni Storm and Kay Lee Ray for the NXT UK Women’s Championship being the standout match. They also featured veterans like Kassius Ohno and Brian Kendrick, with the former in Ohno picking up a win over Jack Starz. The matches for this week include a WWE UK Championship match between Walter and Dave Mastiff, which should be a great hoss match. Let get to it!

They start the show with a package showcasing the WWE UK Championship match between Dave Mastiff and Walter.

They bring us inside the NXT UK arena with the announce team of Tom Phillips and Aiden English. Phillips talks a little bit more about the main event before sending it down to the ring for the first match. 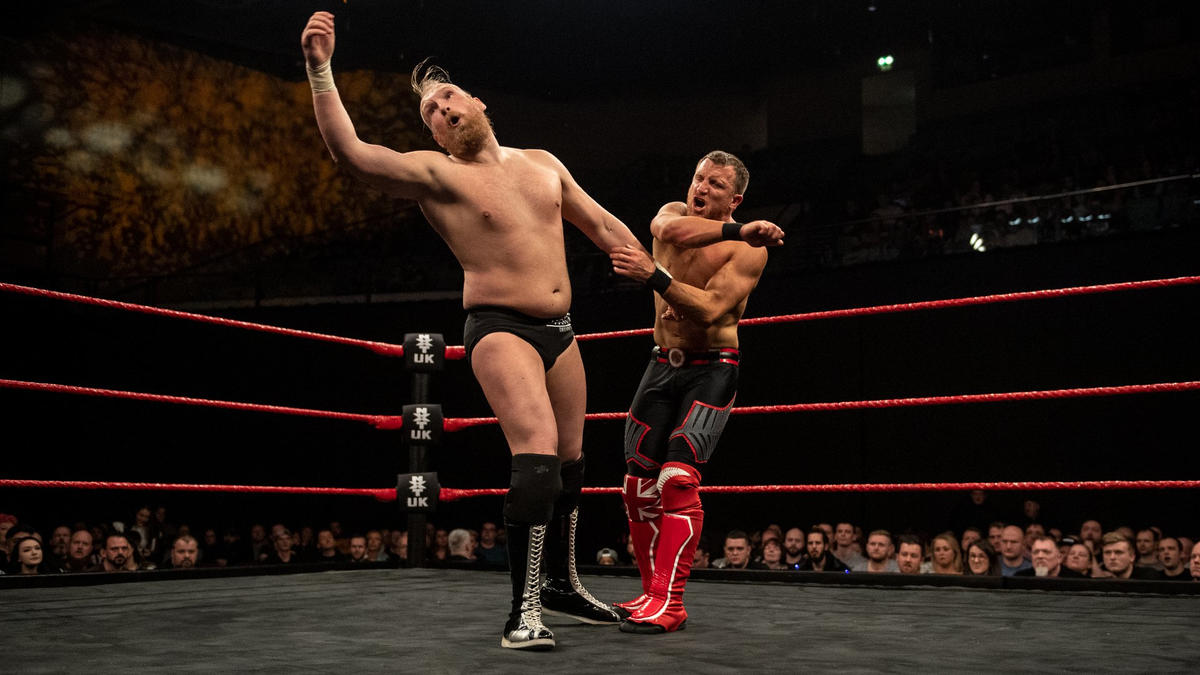 Wolfe tries to start things off quickly but Banks ducks under a clothesline and hits a high knee. Wolfe falls to the outside of the ring, and Banks follows him out with a suicide dive. He rolls Wolfe back in the ring and hits a double stomp from the top rope and gets a near fall. Wolfe rebounds and hits Banks with a stiff kick that knocks him to the mat. Wolfe stomps down on Banks and starts hitting some shots to the head. He works Banks over to the corner before locking in a headlock and hits an elbow to the face. Wolfe with a leg whip and follows that up with an elbow drop and covers for a two count. Wolfe keeps the pressure on with a chin lock in the middle of the ring. Banks makes his way back to his feet, but Wolfe picks him up and slams him down for a two count. He puts Banks in another chin lock before slamming him into the corner. Wolfe continues to assert himself and whips Banks hard into opposite corners of the ring. Banks fights back and hits a big elbow. Wolfe goes into the corner but Banks is right there and hits a dropkick to the face. Wolfe slides to the outside and Banks hits him with a kick to the face. Banks climbs to the top and hits another double stomp and gets a near fall. Banks hits a series of kicks to the back and goes to kick Wolfe in the chest but Wolfe catches him and slams him down. Wolfe hits a spinning suplex for a two count. Both men slowly get to their feet and exchange elbows and kicks before Wolfe hits a Bridging German Suplex. Banks recovers and hits A Slick of Heaven but Wolfe rolls tot he outside before he can make a cover. Banks attempts the Kiwi Crusher on the apron, but Wolfe fights out. He goes to Powerbomb Banks on the apron but Banks climbs to the top rope and hits another double stomp on the apron. Wolfe rebounds and hits some shots on the outside and hits a swinging neck breaker on the outside. He rolls Banks back in the ring and hits a DDT for a two count. Both men hit some strikes in the ring but Wolfe gets the upper hand and hits a Sitout Powerbomb and picks up the win in about 10 minutes.

Collective Thoughts: It was an average match with Wolfe picking up the win and keep the momentum for Imperium as a team moving forward. Travis Banks got some work in and it wasn’t completely one-sided, but Wolfe dominated a lot of it. The crowd was super quiet for most of the match, although they came up a little but towards the end.

After the match, they show replays of the match while Wolfe celebrates in the ring.

Eddie Dennis is backstage and talks about how crazy it is that he went from a Private School Principal to a Professional Wrestler. He says that he has a degree in math and that wrestling is all about manipulating the mind. He said it takes a certain amount to intelligence to manage the mind. He stares into the camera as the vignette ends.

There is a package talking about how deep the NXT UK Tag Team Division is. They go over all the teams in the division and talk about how all of them have to go through Gallus to win the gold. It’s time for the next match. 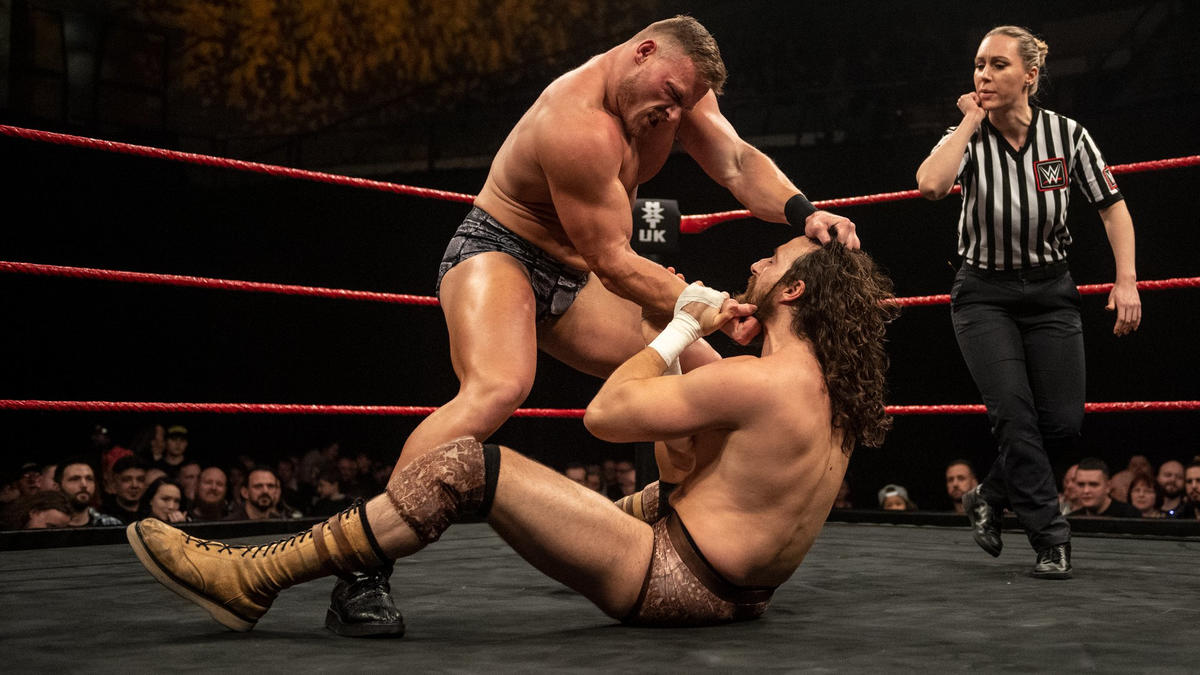 Holland has been hyped up the last couple of weeks and makes his return to NXT UK TV here.

Huxley starts the match off quickly and takes Holland out early. He works him into the corner and hits some strikes but Holland fights out and throws Huxley to the mat. He follows that up with another toss before hitting The Northern Grit. He picks Huxley up and hits another Northern Grit before pinning Huxley in about a minute.

Collective Thoughts: It was an easy win for Holland. He looks great and is probably going to get pushed hard throughout the upcoming months. I think he hit a total of three moves in the match. Easy day at the office.

After the match, Holland walks up the ramp as they show the Tale of the Tape for Mastiff and Walter. These are two large humans.

Jordan Devlin is outside the Performance Center and said this is a message for Johnny Saint and his lackey Sid Scala. He said that he will return home next week and will be at NXT UK. He said that his NXT Cruiserweight Title tour is going global. 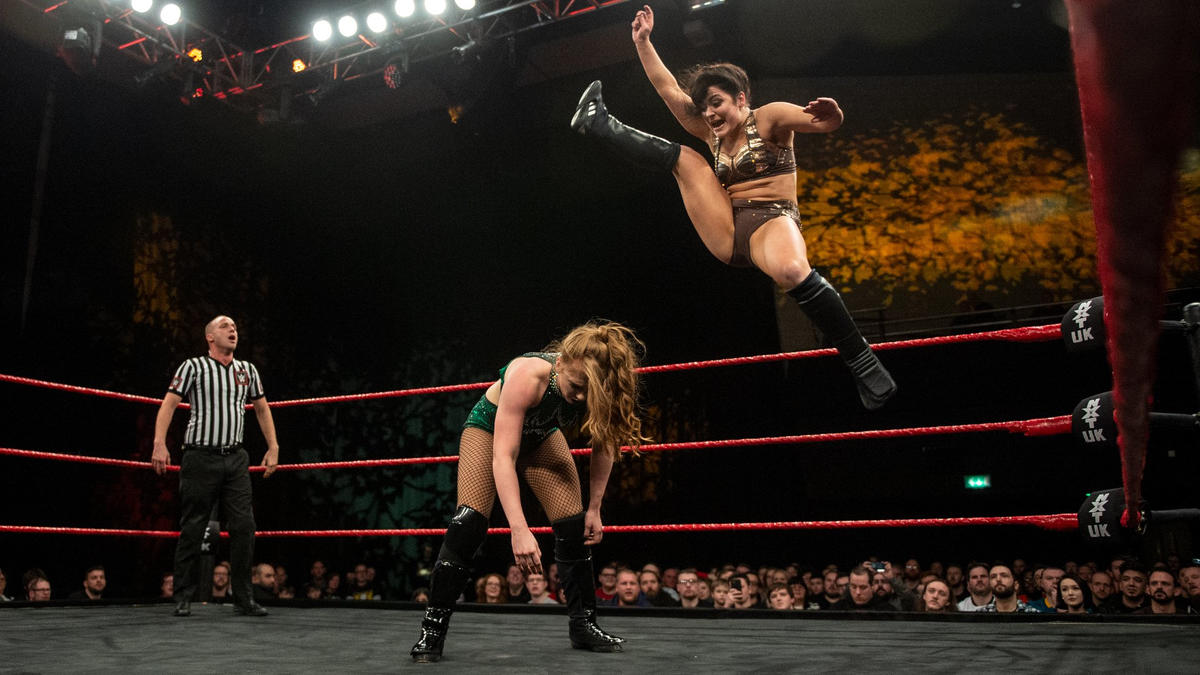 Dawn starts the match off by charging into Valkyrie but she catches her and rolls her up for two. Valkyrie gets her in a backslide for another two count. Dawn fights out and hits an arm drag and covers her for two. She covers her two more times and gets near falls each time. Both women get back to their feet and exchange pinning attempts. Dawn with a backslide got a two count. Valkyrie gets up and goes for a kick but Dawn does a split and she misses. Valkyrie sweeps the leg and hits the Standing Moonsault but only gets a two count. Valkyrie locks the arm of Dawn behind her and as Dawn tries to fight out, Valkyrie kicks her away. Dawn recovers and kicks the legs out from under Valkyrie and hits the Meteora from the top for a two count. Valkyrie recovers and hits a series of kicks to the head before climbing to the top and hitting the scissors kick and picks up the win in about 4 minutes.

Collective Thoughts: That was another win for Valkyrie as she is being pushed hard to become a top star in the women’s division. Dawn put up a fight but it wasn’t enough here. The crowd was silent for most of this and it kind of took away from the match. Also, they had a period of about 2 minutes where all they did is exchange pinfalls, so that was kind of lame.

Walter and Dave Mastiff are shown making their way to the ring and we are ready for the main event. 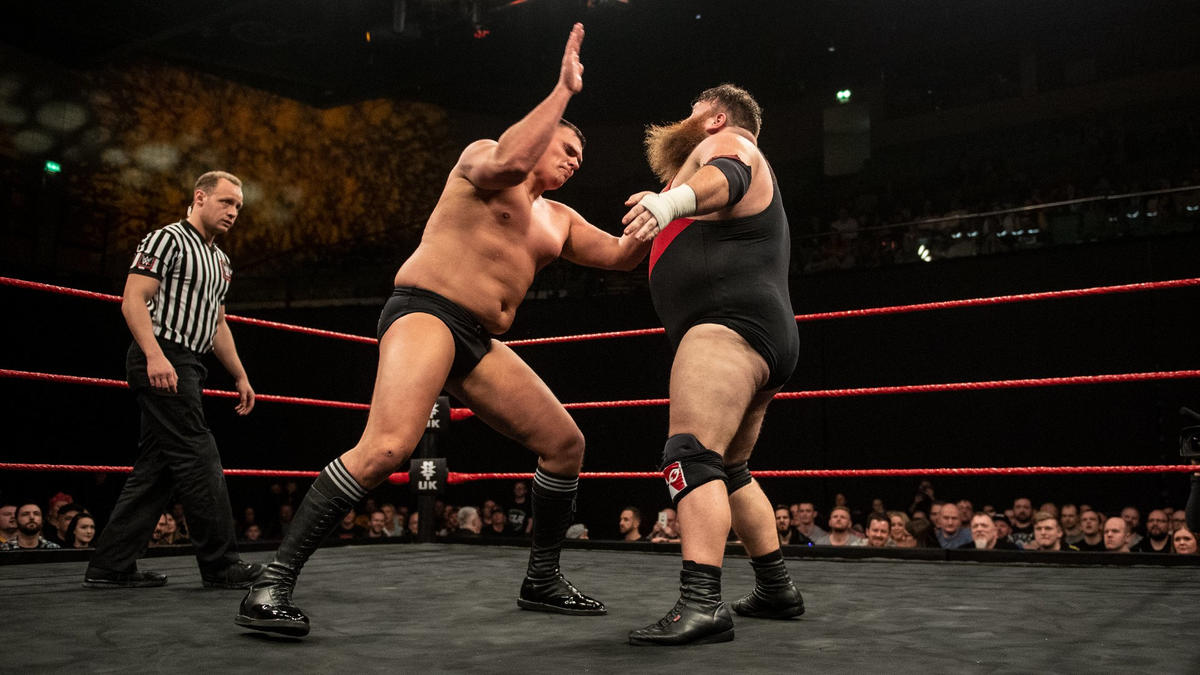 Both men get a championship entrance as they stand in the ring staring at each other.

Mastiff takes control early with working over the arm of Walter. They go into the corner but are soon out to the middle of the ring and trade shoulder blocks with neither man backing down. Mastiff takes Walter down after a final one that knocked him to the mat a well. Mastiff hits some right hands, but Walter fights back and puts him in a sleeper hold. Walter goes to Powerbomb mastiff, but he flips him over and sits down on Walter and picks up a two count. Mastiff continues to hit Walter with some elbows to the back and covers him for a two count. Mastiff hits an elbow to the head and Walter comes back with a chop to the chest. They repeat it a few more times before Mastiff hits a German Suplex into the corner. Mastiff tries to capitalize but Walter cuts him off with a kick to the face. Walter goes for the Powerbomb again but Mastiff picks him up over his head. Walter hits a kick to the face but that only fires Mastiff up, who hits a flurry of punches. Walter goes to the top and attempts a splash but Mastiff rolls out of the way. Mastiff comes over and tries to pick Walter on his shoulders but Walter fights out. Mastiff with a kick to the face followed by a running senton and gets a two count. Mastiff goes for another rolling senton but Walter moves out of the way. Walter goes for a dropkick but Mastiff moves and hits a senton. Walter rolls to the corner but Mastiff hits him again with another senton. Mastiff climbs to the top but Walter takes his legs out from under him and he falls to the mat. Walter goes for a clothesline but Mastiff hits one of his own and both men are down on the mat. Walter goes to the throat of Mastiff and hits a series of chops. Walter gets Mastiff up for a Powerbomb and picks up the win in about 9 minutes.

Collective Thoughts: That was a good hoss match that had a lot of power moves from both men. Walter went for the Powerbomb a couple of times in the match and when he finally hit it, he picked up the win. Mastiff is pretty athletic for a man of his size and the rolling sentons he hit looked good. Walter is building up to his confrontation with Finn Balor so keeping the title on him here was predictable.

After the match, Walter poses in the ring with the title as the show comes to a close.

There wasn’t a whole lot that went on with this show that was very exciting. Wolfe and Banks opened things up and had an average match, and the main event was good, but not great. Holland and Valkyrie picked up easy wins and the show timed out at around 45 minutes. That’s pretty short compared to the other episodes and I feel like you could tell this was the last episode for this group of tapings. I fully expect at least one new announcer next week with Phillips moving full time to Raw and wouldn’t be surprised if Vic Joseph is back on the NXT UK brand.

What did you think of this week’s episode of WWE NXT UK? Loved it? Hated it? Thought it was to short? Either way, keep the conversation going over @collectiveheel on twitter and let me know your thoughts. Support the site. Support each other. I’ll be back soon enough with some more Collective Thoughts.