Here’s the WWE press release on their first quarter of 2019 results. The big things are WWE Network reached 2.0 million subscribers for WrestleMania 35, they lost $6.8 million this quarter and US TV ratings declined by 14% while attendance declined by 11%. They are blaming that on “superstar absences.” The money will go up big time later in the year when the new TV contracts start in October. 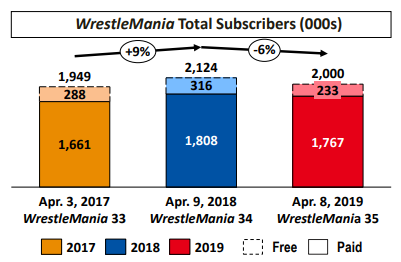 As you can see there, last year had more subscribers for WrestleMania.

* Operating income reflected a loss of $6.8 million as compared to income of $21.8 million in the prior year quarter

* Adjusted OIBDA of $12.4 million was within the range of guidance ($9 million to $14 million), and reflected an anticipated year-over-year decline primarily due to strategic investments

* WWE Network subscribers viewed 23.2 million hours during WrestleMania week, which was roughly on par with the same week last year

* During WrestleMania week, 17.9 million hours were consumed on digital and social media platforms, up 29% from the prior year

“During the quarter, we continued to execute our strategy and achieved targeted financial results,” stated Vince McMahon, Chairman and Chief Executive Officer. “While engagement metrics over the past two quarters were impacted by Superstar absences, we believe they will improve as our talent return and we launch our new season following a successful WrestleMania. We remain excited about the future, particularly with our debut on Fox in October.”

George Barrios, Co-President, added “In the quarter, we delivered Adjusted OIBDA within the range of our public guidance and continue to target full-year record revenue of approximately $1 billion and record Adjusted OIBDA of at least $200 million. Our primary focus is to deliver record results while investing in our key priorities: content creation, localization and digitization.”

Revenues were $182.4 million as compared to $187.7 million from the prior year quarter as the increased monetization of content as reflected in the Media segment was more than offset by a reduction in live event ticket revenue and lower merchandise sales.

Operating Income was a loss of $6.8 million as compared to income of $21.8 million in the prior year quarter, reflecting a decline in revenue and increased fixed costs, including strategic investments, as well as higher stock compensation costs driven by the increase in the Company’s stock price. The Company’s Operating income margin declined to (4%) from 12% in the prior year quarter.

Adjusted OIBDA (which excludes stock compensation) was $12.4 million as compared to $35.2 million. The results reflected an anticipated decline and were within the range of the Company’s guidance ($9 million to $14 million). The Company’s Adjusted OIBDA margin decreased to 7% from 19%.

Effective Tax Rate was 26%, consistent with that of the prior year quarter.

Cash flows generated by operating activities reached $6.7 million as compared to $2.6 million in the prior year quarter as favorable changes in working capital more than offset lower operating performance.

Free Cash Flow demonstrated a $10.1 million use of cash as compared to a $1.8 million use of cash in the first quarter of 2018 as the change in operating cash flow was offset by a $12.4 million increase in capital expenditures primarily associated with the Company’s workspace plan.4

Cash, cash equivalents and short-term investments were $338 million as of March 31, 2019, and the Company estimates debt capacity under its revolving line of credit of approximately $100 million.

During the fourth quarter 2018 earnings call, WWE management discussed the absence of several talent and their belief that these absences had a negative impact on the Company’s engagement metrics. Management believes that these absences continued to impact engagement in the first quarter 2019 as domestic TV ratings for Raw and SmackDown declined approximately 14% and 13%, respectively, and average attendance at the Company’s live events in North America declined 11%. WWE Network average paid subscribers increased 2% and digital video consumption increased 23%. Looking to the future, management believes the Company’s engagement metrics will improve with the return of its talent, the emergence of new storylines and new Superstars, and as the Company launches a new season of WWE following a successful WrestleMania. Moreover, management remains excited about the debut of SmackDown Live on Fox in October. The debut will mark the first time WWE will be available live 52 weeks a year on a premier broadcast platform. In addition to absolute performance, management believes relative performance is critically important as it illuminates the value of WWE within the pay TV ecosystem. In the first quarter, when excluding NASCAR’s premier event, The Daytona 500, WWE delivered greater average viewership than any professional sports league other than the NFL.

You can read the full press release on WWE’s Corporate website at this link.