The first match has been announced for this year’s WrestleMania 37 event on April 10-11 at Raymond James Stadium in Tampa Bay, Florida. Roman Reigns will defend the Universal Championship against 2021 Men’s Royal Rumble winner Edge. As the Royal Rumble winner, Edge had a choice of challenging whatever champion he wanted to face at WrestleMania.

Edge made his choice clear earlier tonight at Elimination Chamber when he appeared in the ring after Roman Reigns defeated Elimination Chamber match winner Daniel Bryan. Edge delivered a Spear to Reigns and then Edge pointed at the WrestleMania to make it clear that he was coming for Reigns at WrestleMania. The Spear from Edge was payback for Reigns hitting Edge with a Spear at the end of Smackdown on Friday.

The matchup between Reigns and Edge will be the first time they have ever had a match. It was also the match that was reported by the Wrestling Observer’s Dave Meltzer (we posted about it here) following the Royal Rumble, so kudos to Meltzer for getting it right.

Here’s a WWE.com article about the match becoming official now.

WWE Hall of Famer and 2021 Royal Rumble winner Edge has chosen to go head to head with Universal Champion Roman Reigns in the main event of WrestleMania.

Returning from injury, Edge started this year’s Royal Rumble Match at No. 1 and outlasted 29 other Superstars to earn the right to to challenge the World Champion of his choosing at The Showcase of the Immortals.

In the wake of his Herculean effort, The Rated-R Superstar traveled to Raw, NXT and SmackDown to scope out the World Champions before declaring that he would not announce which World Champion he would challenge until after WWE Elimination Chamber. He then showed up on SmackDown, getting involved in the main event before taking a Spear from The Head of The Table.

At WWE Elimination Chamber, Daniel Bryan outlasted five other Superstars to earn the right to face Reigns for the Universal Title immediately after the career-altering contest. With the Leader of the The “Yes!” Movement nowhere near 100 percent, The Big Dog emerged triumphant over Bryan in swift order. However, as Reigns was beginning the celebration, The Ultimate Opportunist struck with a devastating Spear on Reigns out of nowhere. Looking over the fallen titleholder, the WWE of Famer pointed to the WrestleMania banner and declared that he will challenge Reigns on The Grandest Stage of Them All.

Reigns has repeatedly insisted that he is the ultimate champion in WWE, backing up those claims by establishing himself as one of the most dominant competitors in the ring today. Considering the tremendous legacy that The Rated-R Superstar has built on SmackDown, it only stands to reason that he would target Reigns and attempt to unseat The Head of the Table at The Showcase of the Immortals.

Find out who will walk out of WrestleMania with the Universal Championship in a special two-night event, streaming live on April 10 and April 11, beginning at 7 p.m. ET/4 p.m. PT.

It’s not known right now if Reigns or Edge will be in a match at Fastlane in four weeks time. 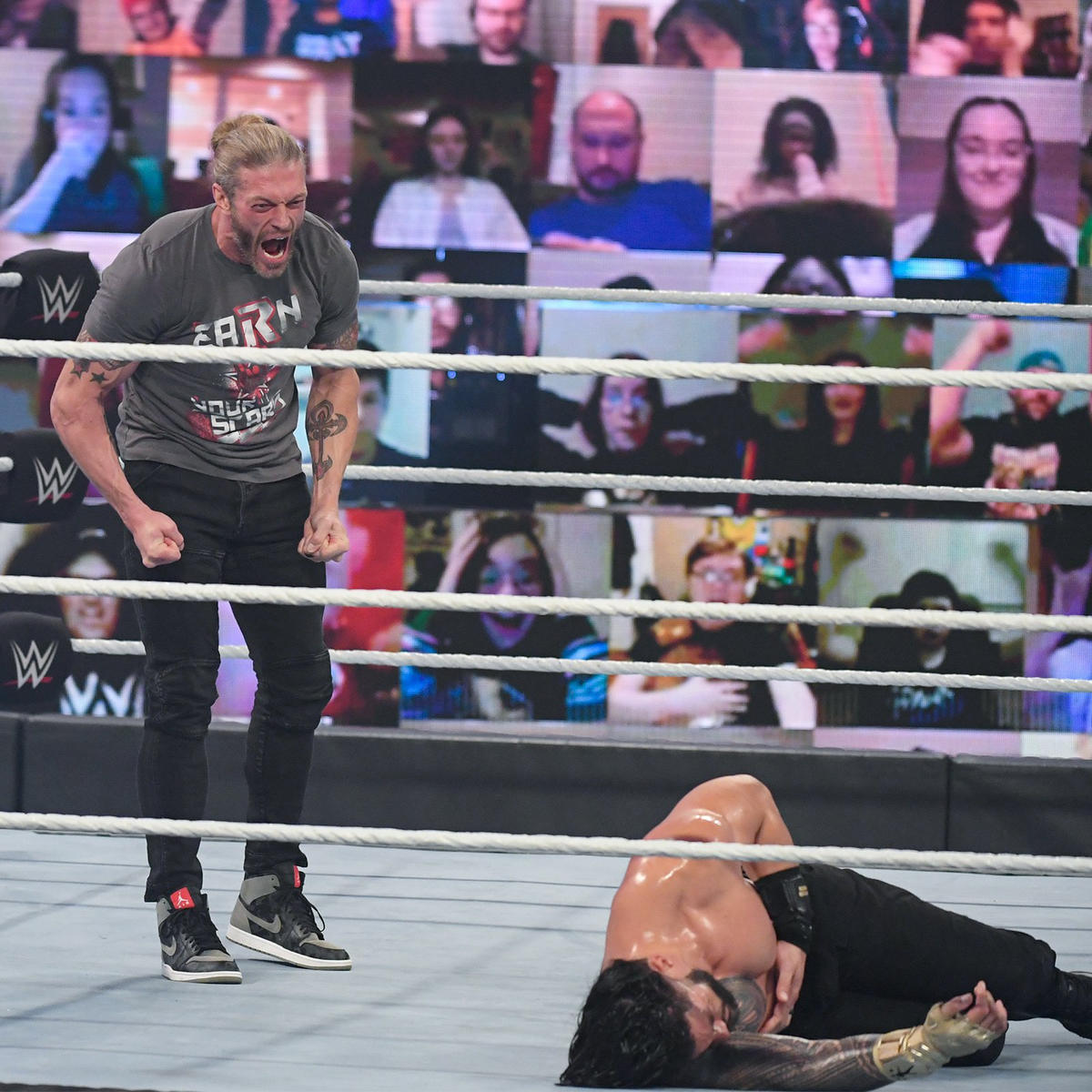