The ending of this past Monday’s edition of Raw saw Intercontinental Champion Dean Ambrose defending his title against Seth Rollins in a Falls Count Anywhere match. Rollins nearly won the title, but an obvious ending happened as Bobby Lashley attacked him and Ambrose got the cheap pin on Rollins to retain.

It was announced today that Ambrose will defend the title on Monday’s Raw in Memphis in a triple threat match against Rollins and Lashley. Here’s more info from WWE.com on the match:

After pinning Dean Ambrose in this past Monday night’s Six-Man Tag Team Match, an increasingly aggressive Seth Rollins earned an Intercontinental Championship that, per Triple H, would be a Falls Count Anywhere Match.

Taking full advantage of the lenient stipulation, The Architect battered the self-proclaimed “Moral Compass of WWE” all over the arena, even ambushing his foe before the match. After hitting Ambrose with a Stomp that would have won the bout, however, Bobby Lashley — who had brawled with The Kingslayer as Raw went on the air — hit the ring and mercilessly pummeled the would-be Intercontinental Champion. After Ambrose scored the pinfall, “The All Mighty One” continued the brutality by driving Rollins through a table.

This coming Monday on Raw, Rollins will once again have a chance to reclaim Team Red’s workhorse title, but he’ll need to battle both Ambrose and Lashley in a Triple Threat Match. Who will walk into the WWE Royal Rumble event as Intercontinental Champion?

It would be a surprise if there was a title change there, but in the “new era” of WWE, you just never know how things may play out. 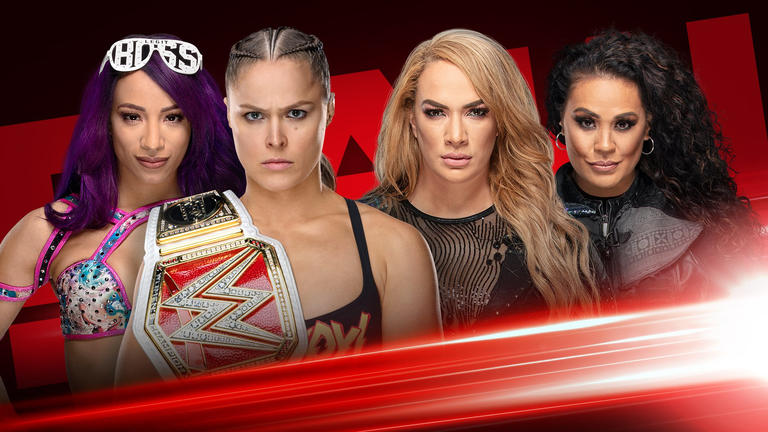 A second match has been announced for Raw as well. It’s a women’s tag team match with Ronda Rousey teaming up with her Royal Rumble opponent Sasha Banks against the evil duo of Nia Jax and Tamina.

That’s all that has been announced for Raw so far. If they announce anything else that’s significant, we will add it to the site before the show. As always, our preview guy Max Grieve will have a Week in Preview article up on Monday looking at the week ahead in WWE.