There was a segment on WWE Friday Night Smackdown last night where Bray Wyatt said that if he gets to have the Universal Title, then “he” gets one too, referring to The Fiend. You can see a photo of it above.

The title was creatied by the “Godfather of Gore” Tom Savini’s Special Effects Studio and Savini tweeted about it last night.

Here’s another photo of the face of it. 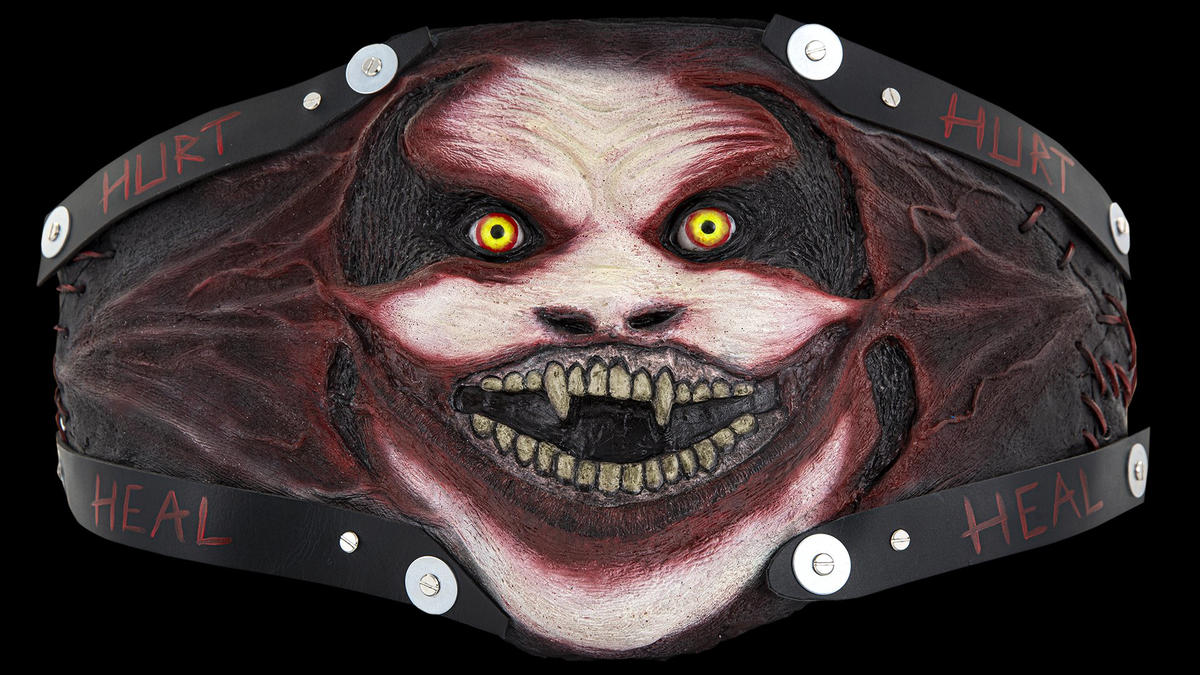 There are more photos of The Fiend’s new title on WWE.com right here as well.

Here’s more info on the title from WWEShop.

Shortly after turning the Universal Championship blue, the titleholder has now unveiled a haunting rendition of the championship especially for “The Fiend” Bray Wyatt.

The new title prominently displays the face of “The Fiend” Bray Wyatt on the front plate. The dark black straps also add to a championship fit for a monster.

Wyatt appeared on Friday Night SmackDown on November 29, 2019 to unveil the title and challenge Daniel Bryan to a rematch.

This work of art was handcrafted and hand painted by Tom Savini Studios. This custom title is made from the same materials and with the same craftsmanship you saw “The Fiend” Bray Wyatt debut on SmackDown on Friday, November 29th 2019.

Designed & Handcrafted by Tom Savini Studios
From the “Godfather of Gore” Tom Savini’s Special Effects Studio (@thetomsavini)
Sculpted with meticulous detail & care
Highly detailed mask made of a latex skin and acrylic eyes that capture the intense stare of “The Fiend” Bray Wyatt.
Length: 64 inches
Height (Chin to Forehead): 12 inches
Weight: 7 lbs, 8 oz.
Individually Numbered & Certified Authentic
Each title will be numbered and includes a Certificate of Authenticity hand-signed by Tom Savini.
Truly Rare & Unique
Due to the hand-made sculpting process, no two titles will be identical. Each will be a truly unique collector’s item!
Genuine Leather Strap
Each title is crafted on a genuine leather strap

On another note about Bray Wyatt, it was reported in the Wrestling Observer Newsletter that Wyatt is now the top merchandise seller in WWE. Becky Lynch was first earlier in the year. This isn’t that surprising since The Fiend is a new character and his merchandise was likely popular around Halloween time.

You can watch the video of the new title here:

The Fiend’s next Universal Title defense is expected to be against Daniel Bryan at the WWE TLC pay-per-view on December 15.