AJ Styles is staying where he’s been for the last three years as part of the WWE Universe. It was reported by PWInsider’s Mike Johnson this morning that Styles has agreed to a new deal to stay in WWE. Styles’ current deal was set to expire in April. Styles later confirmed that he has signed a new deal with WWE.

Styles is being advertised for matches in Europe in May against Samoa Joe. That could change between now and then since WWE is holding their Superstar Shakeup on April 15 and 16, so Styles may not remain a Smackdown guy at that point.

Styles and WWE have agreed on all major points for a new deal, according to Johnson, who cited “several sources” giving him that information.

The next big match in Styles’ WWE career will be at WrestleMania 35 on April when he faces Randy Orton in the first singles match the two men have had on a pay-per-view.

Styles, who made his WWE debut at the 2016 Royal Rumble, has achieved a lot in his first three years in WWE. He became the “face the runs the place” on Smackdown Live when he was drafted to the show in July 2016 and the 41-year-old Styles has been there ever since. Styles is also a two-time WWE Champion that I named the WWE Wrestler of the Year in 2016 and 2017 (in my annual WWE Johnny Awards) because he was…in a word…phenomenal. Yeah, I said it. It’s the right word for him.

Styles confirmed the contract news and announced his family got a new puppy as well.

This is the newest member of my family. Also, I’ve signed a new contract with the WWE. What a cute little guy. pic.twitter.com/PNqh9shgTH

TJR Thoughts: It’s not a surprise that Styles is going to stay where he is in WWE since it took him over 15 years to get there. He’s happy and likely got a raise since WWE has a lot more money today than they did three years ago thanks to $2 billion worth of TV deals they signed last year. At 41 years old with a wife and four kids at home, Styles probably got a deal similar to what Daniel Bryan and Randy Orton have where they get some weekend live events off. If he is wrestling 10-12 days a month instead of something like 18-20 days a month then that’s a nice perk to have and it’s also something that Styles has earned too.

I feel like Styles will be moved to Raw in April just to shake thing up a bit because he’s been a Smackdown guy for three years. Then again, they may want to keep him where he is for when Smackdown moves to Fox in October.

* In other WWE news, Dana Warrior (widow of late WWE Hall of Famer Ultimate Warrior) is now a full-time WWE employee as part of the WWE Creative team, according to PWInsider. You may recall a story from earlier this month that Dana was going to be a part of WWE Creative’s team on a trial basis. Apparently, she did well enough that they are keeping her around full time.

Dana wrote a blog post on the Ultimate Warrior website stating that she has always been a writer and now she’s utilizing those skills in WWE. Good luck to her.

DJZ also was part of the Bromans tag team with Robert Strauss (Robbie E), who recently signed with WWE and is at the Performance Center now.

The real name of DJZ is Michael Paris and he is 32 years old. He’s a talented guy. 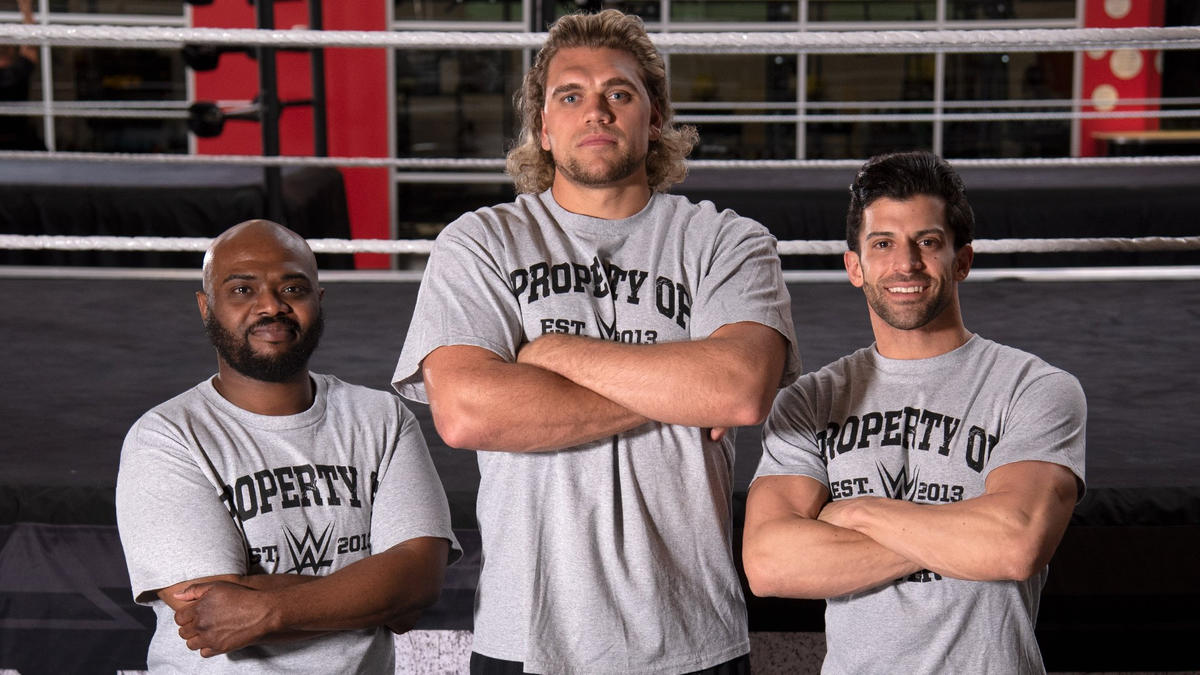 Other recent WWE signees include manager Stokely Hathaway (on the left in the photo above), Cal Bloom (son of former wrestler Wayne Bloom) and then there’s Strauss on the right in that photo.