This week on WWE Friday Night Smackdown, there was a new look for one of WWE’s oldest titles. The Intercontinental Championship debuted 40 years ago when Pat Patterson “won” it in a battle royal that never actually happened although WWE says it was in Rio de Janeiro. It’s been a joke for four decades. Anyway, this week on Smackdown, Sami Zayn presented the champion Shinsuke Nakamura with the new title. It was done in a way where Zayn presented it as a gift to Nakamura as the new official title.

Does this mean that is the full-time, permanent look of the IC Title moving forward even when Nakamura loses it? I think so. I don’t think it’s going to be specific for Nakamura and this was officially the introduction of the new title.

From what I could gather on Twitter during the show, a lot of fans didn’t like the new look for the IC Title. With that said, I feel like any time WWE has debuted a new title, a lot of people just complain about it because they are so used to the former title. I remember it earlier in the decade when they had a new look WWE Title, then a few years later a newer WWE Title. We’ve also seen the red Universal Title, which is now blue and the Raw/Smackdown brand titles have red/blue colors to them.

My personal feeling is it looks fine, but I also wasn’t clamoring for new title design. The previous version of the IC TItle has been around for decades and the only alterations they really made to it were changing the background color. For most of this decade, they have had a white background, which was when Cody Rhodes brought it back. I even had some people ask if WWE changed this title because fans might associate the white strap to Cody, who is now in AEW, but I don’t think that’s an issue.

I think whenever there’s a new look title that it’s usually done because WWE likes to cash in on it. They probably weren’t selling many IC Title designs since it’s such an old design, so now that there’s a new IC Title, perhaps that will lead to more sales. I don’t know if that’s the reason why they did it, but it makes sense to me.

Here’s a look at the three of the designs for the IC Title in the past. 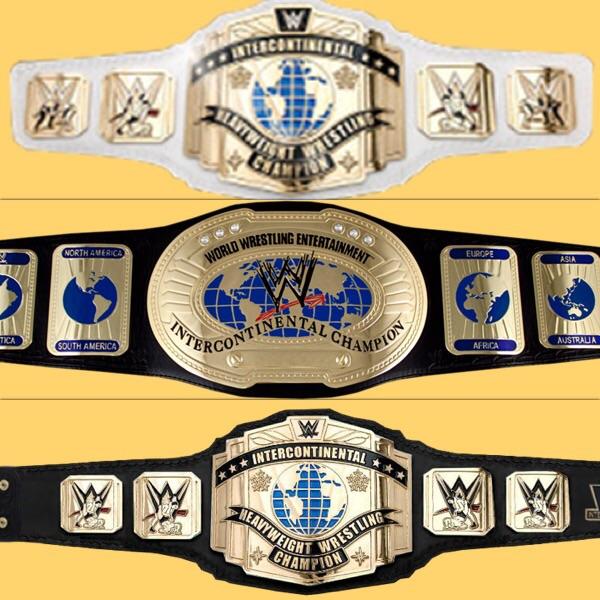 You can read my full WWE Smackdown review here.