There was a big surprise on WWE Smackdown Live from Atlanta tonight. That surprise led to a huge match being announced for the first Smackdown episode on Fox on Friday, October 4 at the Staples Center in Los Angeles. The match will see Kofi Kingston defending the WWE Championship against Brock Lesnar. That episode will also be Smackdown’s 20th-anniversary show featuring several legends from WWE history.

It will be Lesnar’s first match on Smackdown since 2004. It’s actually going to be Lesnar’s first televised match on WWE TV since 2004 as well because he did not wrestle once on Raw in the last seven years since he returned in 2012. Lesnar only wrestled on pay-per-view and live events, some of which were shown on WWE Network.

Lesnar’s appearance on Smackdown this evening was a surprise. He wasn’t advertised and there were no spoilers about his appearance.

Here’s what happened, which I’m going to share from my Smackdown review earlier this evening. This took place right after Kofi Kingston and New Day beat Randy Orton and The Revival in a six-man tag team match where Kingston got the win for his team: 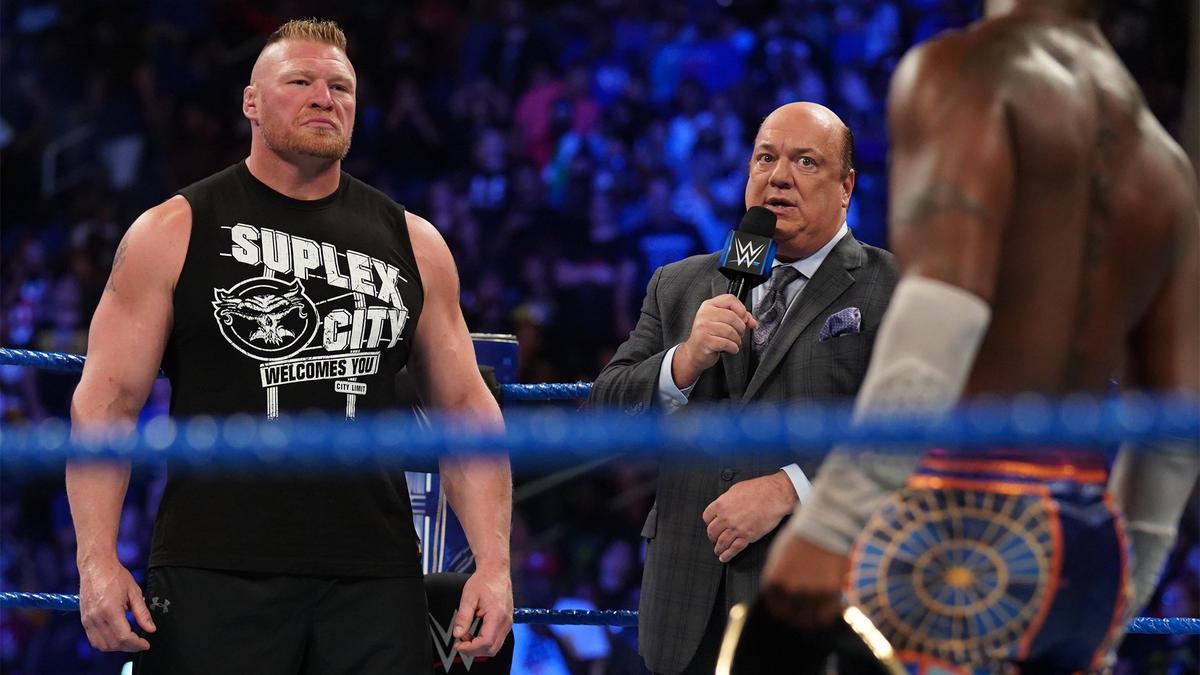 After the match, the music of Brock Lesnar hit and “The Beast” Brock Lesnar was in the arena with his advocate Paul Heyman. They were staring at New Day, especially Kofi Kingston, in the ring. Kingston told Big E and Woods to leave because he’s got this.

Lesnar, who had a bit of a beard, walked on the apron with Heyman while Kingston stood in the ring holding the WWE Title. They went into the ring with Paul Heyman doing his introduction. Heyman said that Lesnar stands in front of Kofi and Lesnar stands in the way of the longevity of Kofi’s title reign. Heyman said it’s a bad day for the New Day…yes it is.

Heyman said that his client Brock Lesnar hereby challenges Kofi to a match for the WWE Championship of the world on Friday, October 4 at the Friday Night Smackdown premiere on Fox.

TJR Thoughts: It’s a big match for the first Smackdown on Fox, which was expected. I think Lesnar will win the WWE Title. I know that pisses off a lot of people that don’t like him, but Lesnar is the biggest name in WWE for casual fans and I think WWE wants to get the WWE Title on him. Lesnar wrestling on TV is rare, so obviously WWE considers the Smackdown on Fox debut to be a huge deal if they are having Lesnar vs. Kingston for the WWE Title.

The next WWE pay-per-view is Hell in a Cell on October 6, so if they do a title change then Lesnar may also wrestle and defend the title two days later as well. Perhaps that could be a reason why Kingston finds a way to retain the title? I’m not sure how they are going to handle the Fox debut and Hell in a Cell two days later, but I think the Fox debut is much more important.