Starting a few weeks ago, the WWE Universe were able to vote on a variety of different awards through social media for NXT, and Triple H has collated those results and revealed the winners. They posted pics of all the winners and videos with speeches, so we’ll include those too.

Tag Team of the Year: Enzo and Cass

Few entertain better than @WWEAallday21 and @BigCassWWE. Congrats on Tag Team of the Year. #YouCantTeachThatpic.twitter.com/iCVRfZZ1AN

Female Competitor of the Year: Bayley

.@itsbayleywwe You've captured the spirit of @WWENXT. Congrats on being Female Competitor of the Year! #ImAHuggerpic.twitter.com/mfSwQ0tREQ

Takeover of the Year: Brooklyn 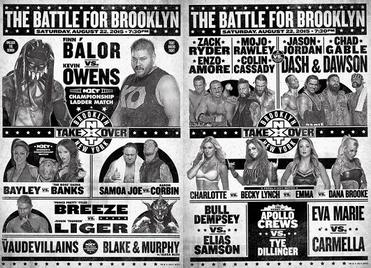 Match of the Year: Bayley/Sasha Banks at NXT Takeover Brooklyn

Congrats to @SashaBanksWWE & @itsbayleywwe. Your Match of Year was history making and changed the business forever. pic.twitter.com/XKnfJNQ5zO

Congrats @WWEBalor on being named made the Overall/Male Competitor of the Year. For you, this is only the beginning. pic.twitter.com/3UDQjcAikW

Award ceremonies never really mean much, especially so in scripted sports entertainment like WWE, but it’s hard to argue against these results. The only real iffy victory is Bayley for the Female Competitor prize, and I’m not saying that because she isn’t deserving. She totally deserves the award, but Sasha Banks carried the division with consistently groundbreaking and amazing matches throughout most of the year.

Like I said though, there’s nothing here to necessarily get upset over. This isn’t the Slammy Awards where we typically just sit back and collectively scratch our heads.

Enzo and Cass are pretty much the most charismatic team down there, Bayley has really developed in the past year and come into her own as a great presence both physically and personality-wise, Brooklyn was a fantastic show that also elevated the entire worth of the NXT brand, Finn Balor rules, and the Iron-woman match between Bayley and Sasha Banks is probably the greatest woman’s wrestling match in WWE history. I’ll go one step further and say it was my favorite match of 2015.

NXT is undoubtedly the hottest aspect of WWE, and that success should continue throughout 2016 as the brand continues to tour to more areas around the world and put on more important, breath-stealing events. Much of the current talent might be getting called up to the main roster this year, but WWE is always on the ball with replacing that talent to keep the brand fresh.