AEW President Tony Khan may have inadvertently given away the card for the company’s November pay-per-view, Full Gear.

In the brief time that AEW has been in existence, Full Gear has become the promotion’s November extravaganza. In previous year’s, it has seen Darby Allin crowned TNT Champion and MJF shockingly betray his one-time ally, Cody Rhodes.

Tony Khan has confirmed that the event will be headlined by an AEW World Championship match between reigning champion Kenny Omega and Hangman Page, who recently made his return to the company won the right to challenge in a Casino Ladder Match. The rest of the card has yet to be announced.

However, recently Tony Khan was photographed holding papers that eagle-eyed fans believe includes a hand-written draft of the matches set to be unveiled for the event. 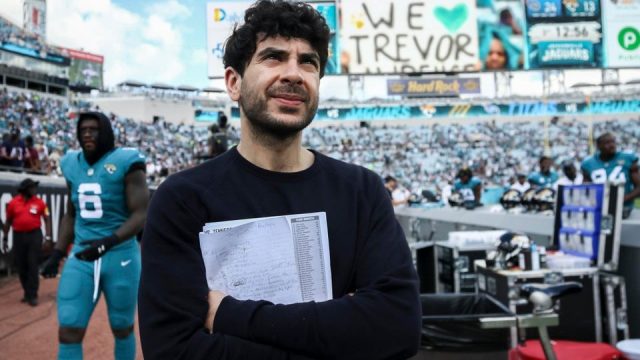 Cody Rhodes’ name also appears but his opponent appears not to have been decided. Names next to his include Malakai Black, Andrade El Idolo, and Miro.

As ever with wrestling events, the card remains subject to change but the list does present a very interesting set of matches which will leave many fans looking forward to AEW Full Gear.