There was a heavy WWE presence at the 2019 ESPYS (or ESPY) Awards last night in Los Angeles. The ESPYS are ESPN’s award show honoring the best in the sports world. This was the first year where there was a WWE category for the best moment of the year over the last twelve months. The nominees were:

Reigns won due to his real life story about overcoming leukemia in about five months to return to the ring. The award was presented during the ESPYS pre-show. They did not say how many votes there were, nor did they announce what the percentage of votes were. I voted for Reigns.

Coming back meant more than just returning to the ring. It meant I was healthy enough to show my gratitude for those who sent their prayers, who continually thought about me, and that I was ready to raise awareness. Thank you for all those who voted, it is an honor. #ESPYS@WWEpic.twitter.com/u2rGTZkVLf

You can watch Roman receiving the award here.

In addition to that, Reigns also presented the Best Coach award to another cancer survivor Jim Calhoun, who is a legendary basketball coach most known for winning three NCAA Titles with the University of Connecticut Huskies. 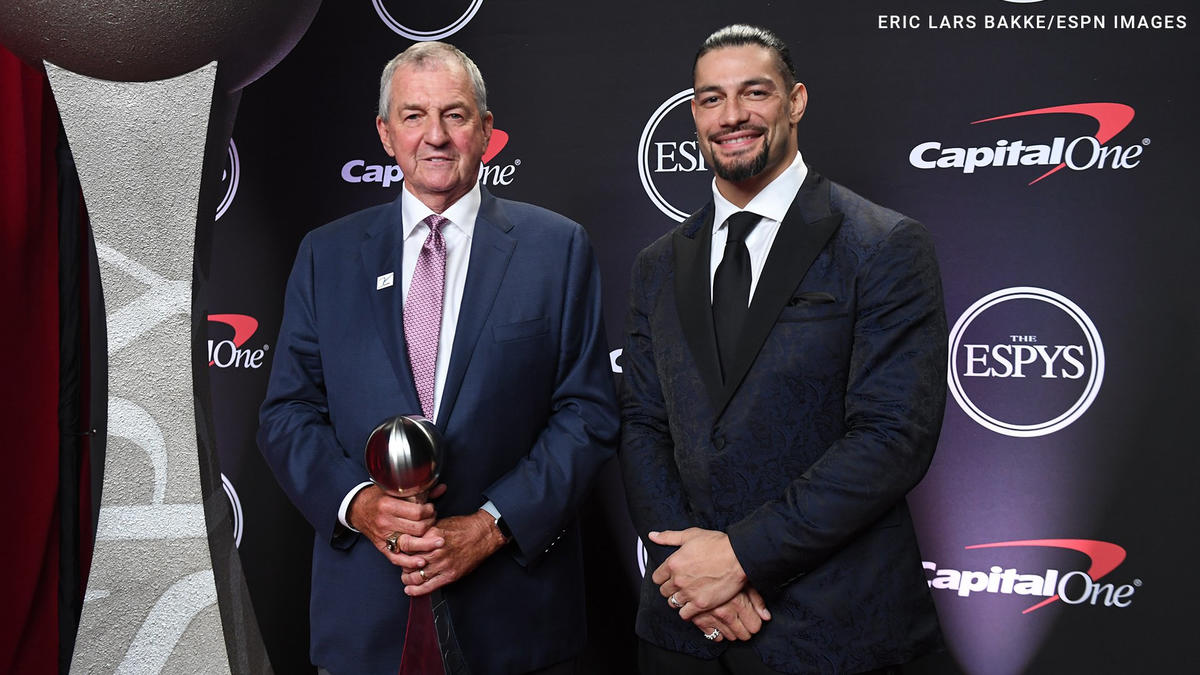 Some of the other WWE names that attended the ESPYS were Triple H, Stephanie McMahon, Seth Rollins, Becky Lynch, Kofi Kingston, Batista (also there to promote his movie Stuber), Titus O’Neil, Lana and Cathy Kelly did the red-carpet interviews that you can check out below. Make sure to watch the end with UFC Champion Daniel Cormier.

The interesting comments from Daniel Cormier saw him talk to Triple H about possibly going to WWE to face Brock Lesnar there since Lesnar has “retired” from UFC and he’s not going to fight Cormier now. There were rumors from last year about Cormier going to WWE when his UFC deal is done because Cormier talked about possibly being an announcer for WWE. Since Cormier plans to retire from UFC later this year or next year, it’s certainly a possibility.

Here are some tweets from WWE people that attended the event.

Congratulations @WWERomanReigns on winning the first-ever @WWE@ESPYS Award! It was an honor to celebrate tonight w/ such inspiring athletes, coaches & influencers who reinforce the spirit of unrelenting perseverance, unbridled passion & the importance of lifting each other up. pic.twitter.com/vowquyeOX6

.@WWERomanReigns return to the ring was incredibly special for the entire @WWE Universe. To have Roman back in the ring and Joe back healthy meant so much to us all and is absolutely deserving of the VERY FIRST #ESPYS Award for best #WWE moment! https://t.co/2pGpiQzcnF

Every day is a reason to celebrate when you’re married to the Game! I Love You Paul! @TripleH You inspire me to be a better person everyday! pic.twitter.com/NTnmfF7Tay

The @WWE was well represented tonight in LA. After a great time at the #ESPYS, @StephMcMahon and I headed to the premiere of #Stuber to support @DaveBautista. Congratulations, Dave!! @StuberMoviepic.twitter.com/OLTy0JBh6A