It’s a huge episode of WWE NXT next week because for the first time ever, NXT will be a two hour live show from Full Sail University in Orlando. However, the entire two-hour broadcast won’t be on USA Network until two weeks on October 2nd.

The first hour on September 18 and September 25 will be on USA Network (for those of you in the US) from 8-9pmET while the second hour will be on WWE Network from 9-10pmET. That’s because USA Network is showing the final two episodes of their long-running TV show Suits at 9pmET. On October 2nd, NXT will be live on USA Network regularly for two hours from 8-10pmET.

For people in other countries, including my fellow Canadians, there’s no news about NXT’s TV broadcast being on TV in Canada. What WWE has said is that the full show will be on WWE Network on Thursday nights at 8pmET and on-demand after that, so we would have to wait a day to watch it. I’m not a fan of that, but it is what it is for now.

On last night’s edition of NXT, which I reviewed here, they set up some big matches for next week although the North American Title match was announced two weeks ago. 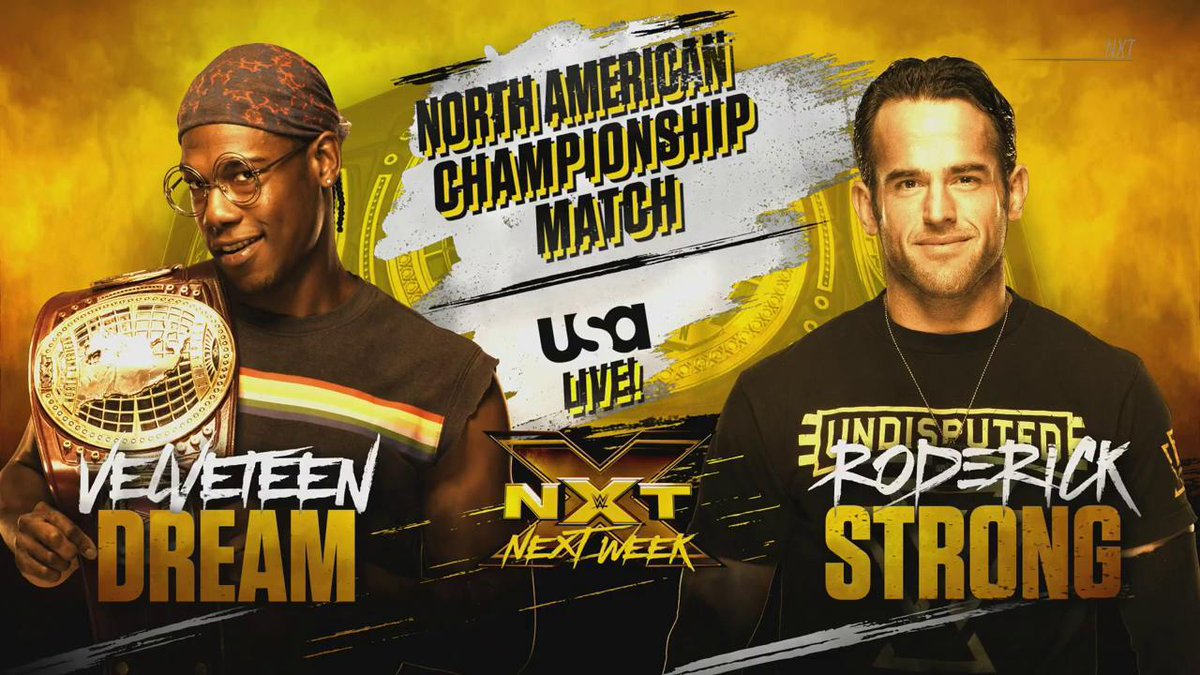 NXT North American Championship: The Velveteen Dream (c) vs. Roderick Strong – They said it will be in hour one on USA Network.

Street Fight: Matt Riddle vs. Killian Dain – They said it will be in hour two on WWE Network.

Fatal Four-Way #1 Contender’s Match: Bianca Belair vs. Mia Yim vs. Candice LeRae vs. Io Shirai – The winner of that match gets a future NXT Women’s Title match against Shayna Baszler.

It’s a great lineup for the first two-hour NXT show with all four matches having the potential to be over four stars out of five, if not higher.

I think Roderick Strong is going to win the North American Title so that NXT can have all four members of the Undisputed Era holding gold with Adam Cole as the NXT Champion, O’Reilly and Fish as the NXT Tag Team Champions and Strong as the North American Champion. It would be similar to Triple H’s Evolution group from 15 years ago holding the main titles on Raw. Then, in the months that follow, they can slowly set up their break up. I don’t want them to break up, but it’s wrestling and it happens…unless you’re the New Day.

It also wouldn’t surprise me if Dream is moved to Raw or Smackdown in October when they do another draft and move the rosters around. I know he’s considered a big deal in NXT, but he has as much potential in WWE as anybody and maybe he needs a fresh start.

I expect The Undisputed Era to retain the NXT Tag Team Titles since they just won them a few weeks ago. I like The Street Profits a lot and if they stay on NXT that’s fine although if they got moved to Raw that would be cool with me too.

The Street Fight between Riddle and Dain should be entertaining. I don’t think it matters too much about the winner, but I’ll pick Riddle just because they could use this victory to get him into that NXT Title picture.

Bianca Belair is my pick as the winner of the Fatal Four Way #1 Contender’s Match and I think she’ll beat Baszler for the NXT Title as well. There’s nothing wrong with a win for LeRae either.

Lastly, Kevin Owens teased going to NXT after he was “fired” by Shane McMahon on Smackdown, so the NXT return of Owens is a possibility. Perhaps he’ll be the next challenger for the NXT Title held by Adam Cole. It would be an awesome rivalry if they did that.