All Elite Wrestling sent out a press release today promoting a special appearance from Mike Tyson on Dynamite this Wednesday.

April 6, 2021 – Ahead of this Wednesday’s action-packed episode of AEW DYNAMITE, All Elite Wrestling announced that boxing legend Mike Tyson will be returning for an appearance during its live show on TNT.

No stranger to the squared circle, Tyson appeared at the DOUBLE OR NOTHING PPV event in May 2020, followed by a memorable AEW DYNAMITE episode where he brawled with Chris Jericho and The Inner Circle. Unlike last May, when there were no fans in attendance at Daily’s Place in Jacksonville, Fla., fans will now have the opportunity to see Tyson in-person this Wednesday night in a safe, live event setting.

“There’s nothing better than an impassioned, live wrestling crowd. Since August 2020, we’ve provided safe, outdoor shows at Daily’s Place, with zero reported transmissions amongst our fans, and we’re so appreciative of the amazing fans who have been joining us week after week,” said Tony Khan, CEO, GM and Head of Creative of AEW. “It’s been incredible for our wrestlers, and for those watching at home, to hear the live reactions. This includes historic events like Kenny Omega winning the AEW World Title, Sting’s surprise arrival, Shaq teaming with Jade Cargill against Cody Rhodes and Red Velvet, The Young Bucks and Darby Allin’s respective championship wins at FULL GEAR, and so many other magic moments. Likewise, Mike Tyson always commands a massive ovation and the attention of fans worldwide. I’m excited for everyone here in Jacksonville, and for those watching on TNT and around the world, to see what Mike Tyson has in store for AEW.”

Last seen in the boxing ring in November 2020, Tyson competed in an eight-round exhibition match against Roy Jones Jr., which ended in a split draw. Tyson joins a stacked lineup on this week’s DYNAMITE, including Darby Allin defending the TNT Championship against JD Drake, #1 ranked wrestler Hangman Page defending that position against the surging “Platinum” Max Caster, and Jon Moxley teaming with AEW World Tag Team Champions The Young Bucks to take on AEW World Champion Kenny Omega and The Good Brothers.

Tickets for Wednesday’s show are on-sale at AEWTIX.com, and AEW’s stringent COVID-19 policies for fans will remain intact for this event.

As AEW continues to kick open the “Forbidden Door” with industry-wide cooperation and co-promotion, along with huge surprises and a deep talent roster that is delivering the best matches and most entertaining moments in professional wrestling today, be sure to tune into AEW DYNAMITE this Wednesday at 8 p.m. ET / 5 p.m. PT live on TNT. 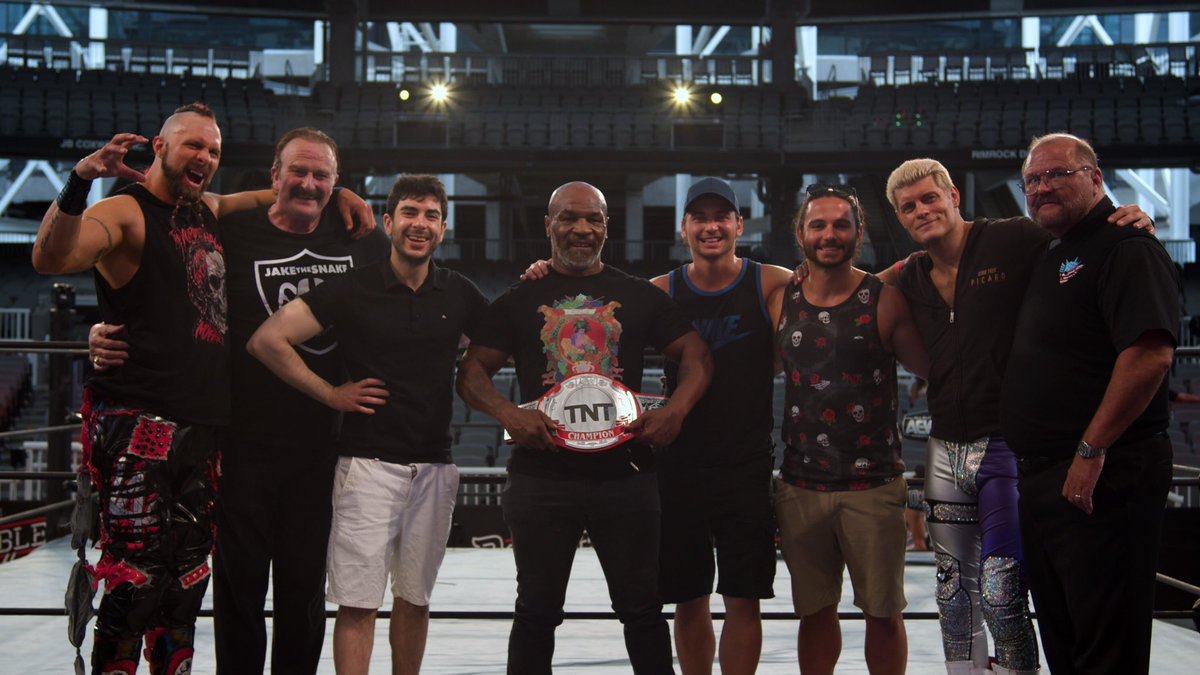 Here are some comments from a Sports Illustrated interview with AEW CEO, GM and Head of Creative Tony Khan on AEW bringing back Mike Tyson this week.

“There are many reasons I wanted Mike to come back. He made a huge impact last year at Double or Nothing, and we’re at a point where we can bring him back in front of our fans. The fans who have come to the shows in Jacksonville have added so much to AEW, and it’s important for me that our fans get to see him live. We’re excited to have Mike back.”

“This is going to be a big deal. With Mike coming to town, he’s going to have a real impact on Dynamite.”

Tony Khan also had a lot of praise for Basketball Hall of Famer Shaquille O’Neal, who wrestled in an AEW ring for the first time last month.

“Shaq is the greatest celebrity wrestler of all time. Backstage, I’ve never seen anyone come in and be more genuine, spend more time working on the craft for months, as well as paying respect to the wrestlers. This is one of the biggest stars in the world, and he came in to help us. He gave to the wrestling business in a way that was incredible, and I’d be remiss not to mention that.”

With regards to WWE NXT moving off Wednesday nights to Tuesdays and leaving Dynamite unopposed on Wednesdays, Tony Khan had this to say.

“I’m always very excited for Dynamite every Wednesday, and now there is more wrestling on TV every night of the week for people to watch. We’d love to have all people check out Dynamite on Wednesdays, and we really want all fans to check out the show. That’s why we’re so open to working with other companies, which you’ve seen as we’ve agreed to collaborate with companies like New Japan Pro-Wrestling, AAA, Impact and the NWA.”

Check out more of Tony’s interview with Sports Illustrated here.