The AEW Full Gear pay-per-view takes place on Saturday, November 13 and after AEW Rampage this week, CM Punk vs. Eddie Kingston was added to the card.

It will be CM Punk’s second AEW pay-per-view match after defeating Darby Allin at AEW All Out in September. Punk is undefeated in his AEW career with a 5-0 record.

As for Kingston, he lost to Bryan Danielson in the AEW World Title Eliminator tournament last week (October 29) on Rampage and after that match, Eddie interrupted a CM Punk interview. Punk wasn’t happy about that, Kingston missed Dynamite on Wednesday this past week and then on Friday’s Rampage, the sh*t hit the fan, so to speak.

The November 5th AEW Rampage segment between CM Punk and Eddie Kingston on Rampage was a classic promo exchange that led to a wild brawl that saw dozens of people get into the ring to try to break them up. Each guy fired personal shots at the other with Kingston claiming that Punk didn’t show him respect when Kingston was breaking into wrestling (Punk is a few years older than Kingston). Punk told Kingston it’s because he’s a bum. Kingston called Punk a “lowlife, scumbag, two-faced, narcissistic bitch” at one point. After they agreed to a match at Full Gear, Punk was ready to leave, but then Kingston made it personal again. Kingston said: “Do me a favor, quit again and leave for seven years!” Punk responded with a headbutt and the brawl was on from there.

Punk and Kingston had a pull-apart brawl that saw AEW referees, backstage officials and members of the locker room pouring into the ring to try to break it up. The crowd in St. Louis lost their minds since they are two of the most popular wrestlers in AEW, but it felt like it was a real issue between the two men. The crowd loved it. Later in the show, AEW announced that Punk vs. Kingston was official for Full Gear on November 13.

There was another match that was made official for Full Gear: The Superkliq (The Young Bucks & Adam Cole) vs. Christian Cage, Luchasaurus & Jungle Boy in a Falls Count Anywhere Match. There have been issues between those wrestlers for several weeks now, so it made sense to add them to the card and the Falls Count Anywhere stipulation should lead to a chaotic and fun match to watch.

The AEW Full Gear lineup for next Saturday, November 13 looks like this right now with eight matches: 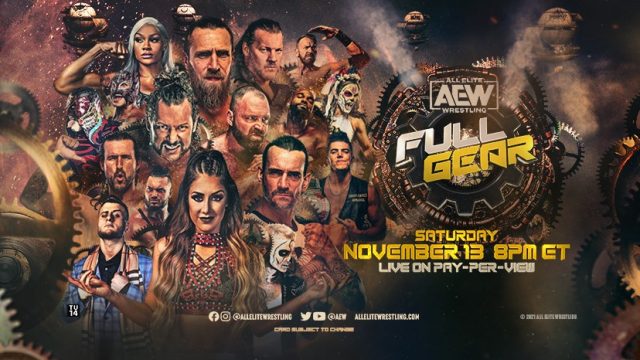 For information on how to order AEW Full Gear on Pay-Per-View, visit AEW’s website for more info.