Insanity is always defined as the act of doing something over and over again, and expecting a different result. In a trend that started as best I can tell, when The Rock defeated the hottest act in WWE in CM Punk for the WWE Title at Royal Rumble 2013, WWE’s insistent insanity of putting over “part-time” guys at the expense of their full time roster. When The Rock defeated CM Punk, I truly believe that was actually the day Punk decided he would be leaving the company sooner rather than later. The ironic thing is, the crowd was solidly behind Punk at the time. He was “their guy.” All these years later, CM Punk is more over than any full-time member of the current WWE roster. How’s that for irony? Punk would be the biggest “part-time” star WWE has.

That brings us to Super Showdown. That insanity of WWE reared its ugly head once again. Not once, not twice, but three times. In a mere few moments of a Chokeslam, “The Face that Runs the Place” was proven to be just a face in the company. In less than 90 seconds, “The One & Only” was proven to just be one of many that fall to Vince’s obsession with Brock Lesnar. Then the grand finale… The Fiend, who had spent months and months and months to reclaim his name after being scorched earth due to never winning the big matches, didn’t win the big match again as four sloppy spears and a bad Jackhammer was apparently enough to stop the seemingly unstoppable. Let Me In turned into Left Out. 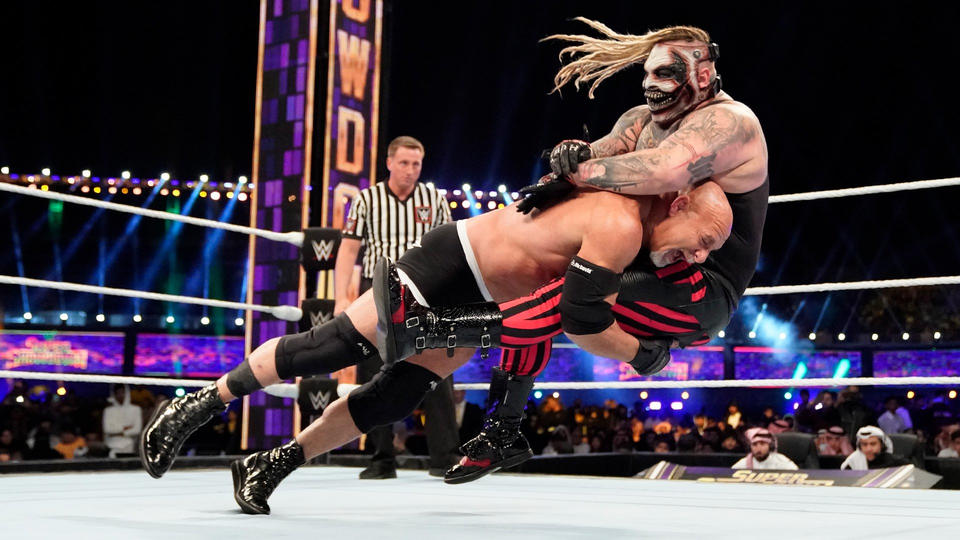 The crazy thing is, I can actually make sense of the last one. WWE has made me insane to the point that I can justify Goldberg squashing The Fiend, and I bet I can make it make sense to you too. These two things I hold to be true:

1. Roman Reigns is winning the Universal Title at WrestleMania.

2. The Fiend was walking a thin line on going from cool to being turned on.

The red light was ruining The Fiend’s matches, and it seems like we’ve moved past that. Then in his matches, there was no stopping him. It was to the point that it was ridiculous how much he was coming back from. That had to stop at some point.

You can believe that it’s ridiculous Goldberg was the one that stopped it, but the point is, someone had to. Then you bring Roman into the equation. If you’re one of the “fans” that still boo Roman Reigns, please stop reading. This column isn’t for you. Roman has been away from the title picture for a LONG, LONG time. The time is right to put him back at the top. But if you have him be the one to stop The Fiend, there is a 0% chance the crowd responds positively to it. WWE is trying to put Roman in the most favorable position possible for his title win, and I totally get it. Kudos to them for getting that right.

I don’t think the fans will trash the Goldberg/Reigns match at Mania. I think it’s a fun matchup that people will enjoy for what it is. Reigns isn’t defying crazy odds and isn’t defeating the Internet’s darling.

Bray will be fine if he has a good showing and a quality win at WrestleMania. This is a small step back to take two steps forward. What’s that you say? Bray is rumored to face John Cena at WrestleMania? Well… this might not be good then. Surely they wouldn’t have Cena beat The Fiend, would they? Answer me this, do you really think John Cena is coming back after a year plus away, just to put someone over? Especially someone he’s already defeated at a WrestleMania? I don’t.

Where does that leave the likes of Bray and Ricochet, and even Royal Rumble winner Drew McIntyre? It’s not that far fetched to think Cena, Lesnar and Goldberg will win the three biggest matches at WrestleMania. With everything I just said about Reigns winning the Universal Title, there is no doubt that WWE and Vince McMahon could overthink it and think that keeping the title off Reigns is a good thing, not understanding what the damage is to lose to part-time guys. Reigns wouldn’t get booed after that match if he were to lose it. He wouldn’t get cheered either. He would get the indifferent treatment. He would be Seth Rollins. He would be Kevin Owens. He would be Samoa Joe. He’ll be what Ricochet and AJ are now after Super Showdown. Just guys.

We’ve been all led to believe that Paul Heyman is high on Ricochet. Clearly Vince is higher on Brock Lesnar. Ricochet getting a Universal Title match, on paper, is a good thing. If you make him look good. He could’ve climbed to that next level with a good showing. Instead, he didn’t get one offensive move in. So now he’s just a guy that’ll do cool spots that’ll get a reaction and then never be remembered.

AJ Styles ruled Smackdown for three years solid making himself a household name in WWE, which people thought would never happen. You could argue that with how good that run on Smackdown was for AJ, that when you think of his name, you think of WWE instead of Impact/TNA now. That says something about him. Then he moved to Raw, and all that goodwill was undone in a matter of months. Now, he’s on a “collision course” with The Undertaker at WrestleMania. Again, something that on paper makes sense. The Face That Runs The Place vs. The Face of WWE. The Phenomenal One vs. The Phenom. Perception is reality, though. The perception now is that Taker can easily dispose of AJ without even taking off his hat and coat. Why would we want to see that match at WrestleMania now? Only two men have ever defeated Undertaker at WrestleMania (Lesnar and Reigns), and AJ is clearly not either of those two guys. So if you think AJ is going to beat Taker at Mania, I have some oceanfront property in Arizona to sell you. 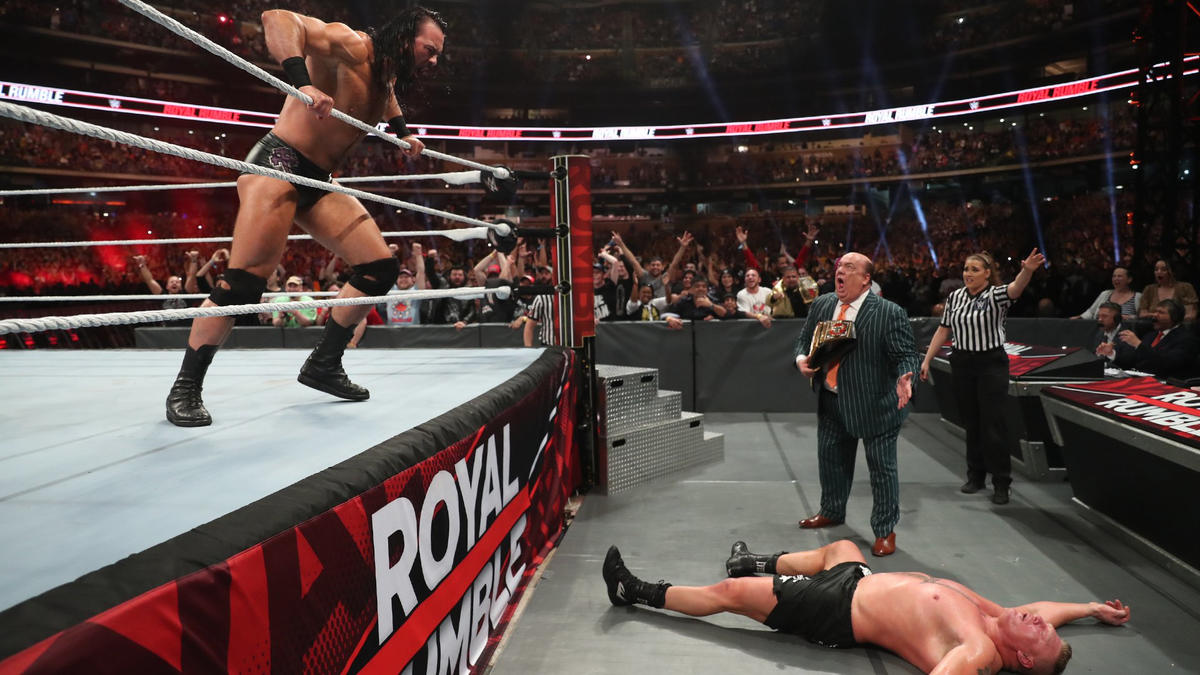 That leaves the one guy that somehow managed to avoid getting tarnished in Saudi Arabia, Drew McIntyre. I say this with all sincerity, there is no one more deserving of the push that he’s getting, than Drew. He left WWE, reinvented himself, and MADE WWE put him in this position. It was undeniable. However, he’s in an unwinnable position now. The skeptic in me says he’s most likely going to lose to Lesnar. Even if he does win though, what does it mean? Does it mean anything to beat Brock Lesnar? Ask Seth Rollins.

It was one year ago that Rollins was on his own path to slay the Beast. And he did. A year later, and Rollins is toiling away in yet another tag team built out of yet another stable. Rollins is never allowed to be on his own long enough to be “The Guy.” Not to mention, let’s not forget that evidentally now 4 spears + 1 Jackhammer > 15 (FIFTEEN!) Curb Stomps. McIntyre has the look and build to be “The Guy,” but a win against Lesnar isn’t going to do it. WWE has only one guy on the roster that getting a win over, means something, and we’re right back to Roman Reigns. So once McIntyre wins the title, yes the crowd will pop. Yes, it will be a great moment on a 7-hour show. But then McIntyre will have to carry the brand and defend the title against…just guys. So Vince will call Brock back up, and round and round we go.

That’s the problem with WWE – the definition of insanity. We’re right back to part-time guys and dependency on one guy. It was John Cena, now it’s Roman Reigns. Everything goes round and round and weeks turn into months and turn into years with nothing memorable happening. We don’t have Hell in a Cell matches to end rivalries. We have Hell in a Cell matches because it’s October. WWE constantly does the same thing over and over again and clearly expects a different result. If you’re as tired about it as I am, let me tell you about this show Revolution that’s happening on February 29th.