Happy Monday, TJRWrestling faithful! Are you sitting comfortably? Do you enjoy watching Monday Night Raw? Are you aware that Brock Lesnar probably hates you? Good, then let’s begin. Welcome to the Week In Preview for World Wrestling Entertainment, August 6th 2018.

What to expect: No Brock Lesnar tonight – he’s back for the go-home Raw before SummerSlam next week (yep, it’s coming around already) – so the floor belongs to Roman Reigns; look for his reaction to Lesnar’s assault of General Manager Kurt Angle and spurning of advocate Paul Heyman. Seth Rollins vs Dolph Ziggler is set for SummerSlam, but Rollins finding a way to neutralize Drew McIntyre’s influence could be a theme this week. Braun Strowman took a countout loss to Jinder Mahal last week; Mahal’s celebrations make me suspect there’ll be a rematch this week – which Kevin Owens may cost Strowman again (to further highlight their stipulation for SummerSlam over the Money in the Bank contract). Confirmation of the Tag Team Championships match for SummerSlam may also come – The B-Team, The Revival and Matt Hardy and Bray Wyatt are the men in the frame.

In tonight’s announced matches, Alexa Bliss may try to interfere in Ronda Rousey vs Alicia Fox but it’ll only delay the inevitable Rousey win (and possibly not delay it by too much). Bobby Roode and Mojo Rawley originally looked destined for the SummerSlam pre-show, so how tonight’s match – probably another short one – is resolved may be a point of interest. In other feuds that’ll figure, Finn Balor will likely seek another match with Baron Corbin after Corbin’s post-match attack last week, The Authors of Pain and Titus Worldwide will probably clash again (Rezar vs Titus O’Neil is a possibility), Elias vs Bobby Lashley looks like being a possible late addition to the SummerSlam lineup, while Sasha Banks and Bayley…… Insert the usual question mark over what’s going on with Sasha Banks and Bayley here.

Spotlight: The definition of insanity is using the same clichés over and over again and expecting to write something different about Roman Reigns vs Brock Lesnar, so you find me in a tricky spot this week. Again WWE has a Reigns/Lesnar main event scheduled for one of its biggest shows, despite popular reaction to those matches deteriorating with each showing in front of hardcore audiences. The latest in the series is locked in for SummerSlam – in front of a New York area crowd – and the storyline and motivations are largely unchanged. Will WWE get the different result they’re after from the Brooklyn crowd?

Last week’s Raw angle found new options to exhaust in making Brock Lesnar unlikable, ripping on the product from backstage, delivering an unprovoked F-5 to the show’s General Manager and half-turning on his only ally (and doyen of promos in the eyes of the ‘smart’ markets) Paul Heyman. However, this presents little change to the previous high-risk strategy – convincing people to dislike or feel bored of Lesnar hasn’t automatically made them like or feel enthusiastic for Reigns in the past. WWE’s producers would’ve been heartened to hear the ‘we want Roman’ chants in the main event segment, but surely they know better than to rest on their laurels.

Speaking of resting on laurels, I feel like last week’s version of Brock Lesnar was, at least, an improvement on the version that was written off television appearances as a ‘no-show’ when we were last served this program. Showing the character’s disrespect and arrogance is so much more compelling, especially as Lesnar aces putting out that kind of image. To be honest, I’d go further and say I wish this was the presentation of Lesnar we’d got on all those previous occasions he merely stood in the ring while Heyman did the mic work. It’s in contrast to how Raw has got off on the right foot with Ronda Rousey, by adding to her reputation rather than coasting on it.

SummerSlam will, surely, be the final time around for Lesnar and Reigns. Not only is it old news that Brock Lesnar’s heading off to focus on UFC again, but Roman Reigns and the Universal Championship both need to be broken out of this death spiral. With Lesnar not due at television this week, we’ll now see whether WWE is changing its approach with Reigns; being sent home from the arena by an authority figure last week again started out by covering old ground (the ‘suspension’ angle before WrestleMania). If all else fails and it looks like the SummerSlam crowd won’t buy Reigns-Lesnar Part 94 – and one would think the chances remain substantial – there is at least a Money in the Bank briefcase in play. Two weeks out, a cash-in looks inevitable. 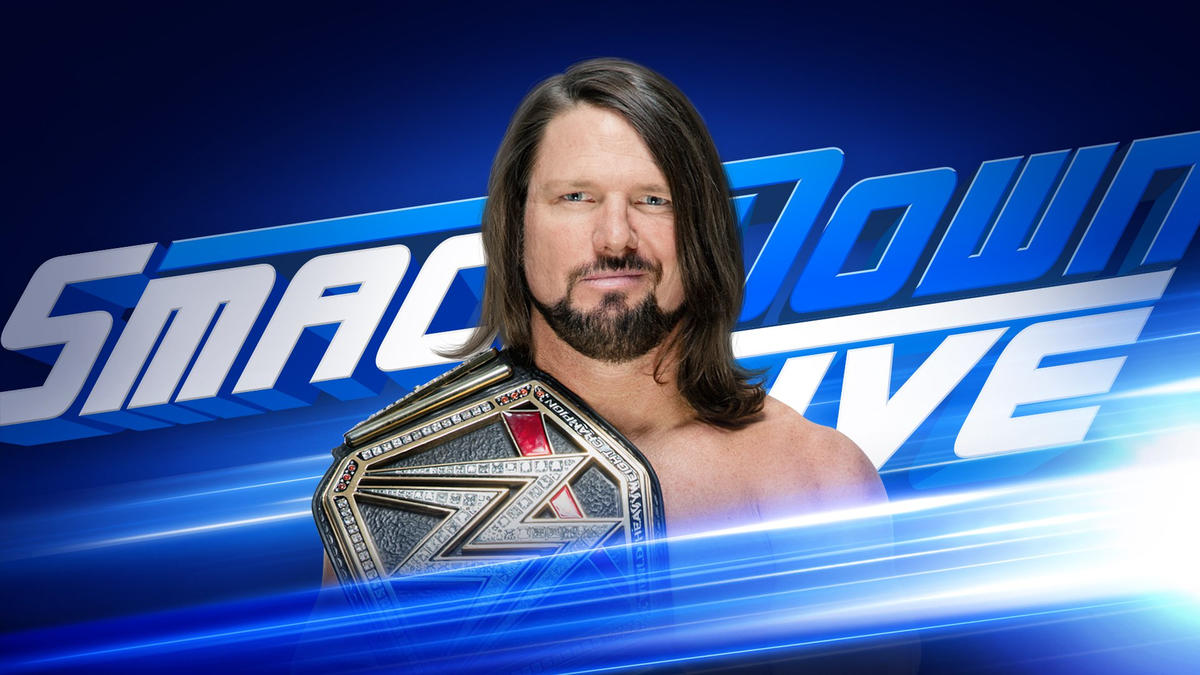 Announced: The New Day vs. The Bar to name the number one contenders for the SmackDown Tag Team Championships at SummerSlam. Charlotte Flair and Becky Lynch vs. Billie Kay and Peyton Royce.

What to expect: Top of the wishlist for SmackDown Live this week is that The New Day vs The Bar gets time to shine – which it almost certainly will. Expect possibly 15-20 minutes, with The New Day favorites to win. It’s been noted that AJ Styles will be back on this week’s episode, likely to respond to Samoa Joe’s promo last week; the general rule about becoming more hostile when your opponent brings up your family applies here as usual. Meanwhile in the Women’s Championship scene, expect the focus to be on emerging tensions between Charlotte Flair and Becky Lynch during their tag match after the former inadvertently hustled in on the latter’s championship shot last week.

Rusev and Lana are in an interesting spot at the moment, with it being unclear whether their program with Andrade ‘Cien’ Almas and Zelina Vega has further to run or if they’re likely to pivot towards dealing with the failings of Aiden English, which will surely become a flashpoint soon. In the United States Championship scene, a singles match has now been announced for SummerSlam between Shinsuke Nakamura and Jeff Hardy, but Randy Orton will surely find a way to add himself into that this week (while Hardy could really benefit from getting a measure of payback). Finally, The Miz and Daniel Bryan will continue to trade barbs and, possibly, babies. In fact, let’s move on to talk about my hopes for that in a little more detail now.

Spotlight: While Raw pummels away at making Roman Reigns vs Brock Lesnar work, SmackDown Live is in receipt of the absolute gift that is Daniel Bryan vs The Miz. By comparison, the program between Bryan and Miz only needs the lightest of light-touch management. There’s no need to paint character motivations in bright primary colors, attempting to shift viewer perception about the people they’re seeing, because the roles both men are playing are informed by everything they’ve previously done in the WWE; Miz was made by WWE, allured by fame and badly hiding insecurity, Bryan’s always had the pedigree but had to fight from beneath. Every promo in this feud is simply adding garnish rather than trying to hammer a nail into a wall.

I could live without all the baby references, but I suspect that’s an unrealistic expectation. WWE being what it is, any chance to shoehorn in a topical cross-promotional reference will be seized; the existence of Miz and Maryse’s reality show brings a requirement to throw more light on their new family than would otherwise be the case (and on a side note, surely the ‘look at our happy family’ angle would be dynamite if Miz were to save it for another go-around with John Cena; it feels like he’s got the wrong Bella Hubby here). That said, it still works for two reasons: Firstly, Miz sells even the shallowest angles so well on the mic. Secondly, celebrity self-obsession fits Miz’s character and – most importantly – throws the differences between the two men into sharp relief.

What I think I like about this program most is how it has recognized, the odd blindside attack notwithstanding, that there’s virtually no need for any physicality. Sure, Daniel Bryan may now be in a position where he can take a Skullcrushing Finale, but this feud was forged and gotten over – gotten huge, in fact, with rave reviews – back when he wasn’t allowed to. That episode of Talking Smack was two years ago this month and not a single strike has been thrown between the two men until very recently. The realization that the audience, having come this far and stayed interested, would surely be prepared to wait a few weeks longer for the fireworks is smart and correct judgment.

With two Tuesday night shows still to book with content before SummerSlam I accept this might be an unlikely course of action, but I can see no reason why this couldn’t be taken to its extreme; more than just not coming to blows with each other, I’d really like to see Daniel Bryan and The Miz not wrestle at all on television this side of Brooklyn. Not even against other people. To revisit Brock Lesnar, the selling point of a ‘special attraction’ isn’t a high profile name but the preciousness of their performance. Right now, the only people Miz and Bryan need to be fighting are each other. Nobody else needs to get in the way and we just need to be kept hungry for two more weeks. Surely the moment has come for an all-time masterpiece from WWE’s video package team.

Just in case you were worried that NXT (Wednesday) was standing still in the development of its roster – a concern that I’d imagine very few people have – another notable signing from the independent circuit, Keith Lee, makes his debut this week. Ricochet, a grizzled Full Sail veteran now by comparison, is also billed as being ‘in action’.

Nothing fixed ahead of time for 205 Live (Tuesday) again, though I’ll note it was good to see Cedric Alexander vs Drew Gulak get slated for SummerSlam, even if it might well end up being on the pre-show.

Some of this week’s most pressing but least publicized talking points. Throw down your answers in the comments section as usual!

Until next week, strap in, enjoy the ride and remember to stick with TJRWrestling.net for your show recaps and analysis.