The rematch. It’s not just any rematch, though. It may be the best rematch in WWE history. That’s up for debate for another time. After seeing their epic, five star WrestleMania 10 ladder match I had no idea what to expect in the second ladder match between Shawn Michaels and Razor Ramon. It took place at the Pittsburgh Civic Center in Pittsburgh, Pennsylvania on August 27, 1995. 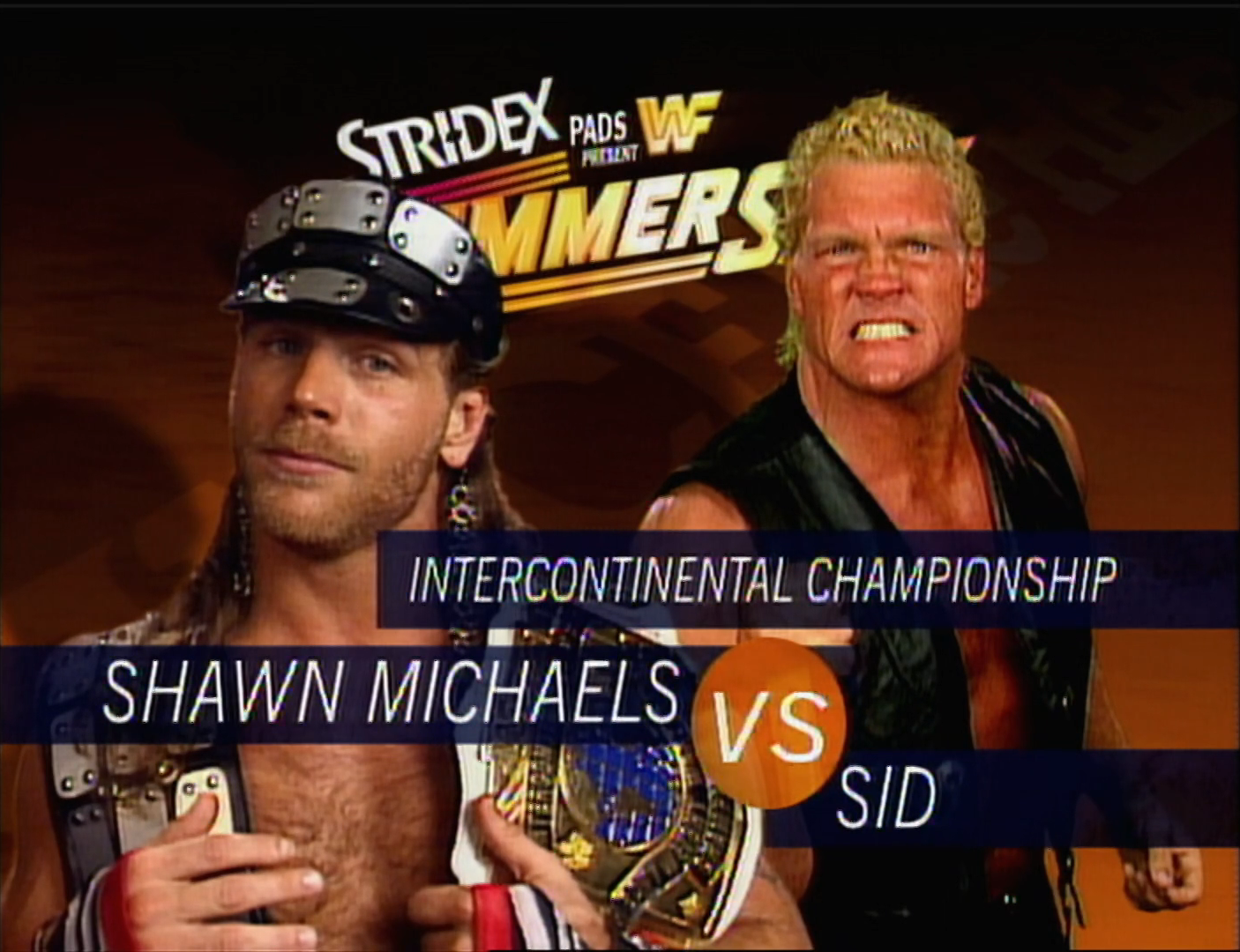 There was not much of a feud heading into this one as both guys were fan favorites at the time. Michaels was apparently going to face Sid (see the match graphic above), but that idea was changed and they decided to have a ladder match rematch because Summerslam 1995 was a weak show.

Shawn was very popular and about to be pushed as the top babyface/hero in the company while Razor was doing solid work as somebody that was always around the Intercontinental Title.

The action in the match was spectacular right from the start. There’s a spot where Razor suplexes Shawn over to the top to the floor that HBK takes on the knees, which is crazy to do and it’s no shock that he had knee injuries throughout his career when you see a bump like that.

There were some cool counters by Razor where he avoids the baseball slide ladder shot to the ribs and the splash off the ladder, which were both prominent spots in the WrestleMania 10 ladder match. Razor also focused his attack on Shawn’s knee for much of the match, which makes sense because if his knee is hurt he can’t climb the ladder quickly.

I really liked the finishing sequence. Razor brought in a spare ladder from under the ring, which led to Vince McMahon (the play-by-play announcer during the match) asking what one was the legal ladder. Yes folks, a legal ladder. Both were legal, but the ladder match was a new concept so it was a fair question.

Razor set him up for another Razor’s Edge so Michaels’ backdropped him over the top rope in a bump reminiscent to the one Razor took at WM10 on the exposed concrete. Shawn went up again, missed on his first grab and then finally grabbed the belt to retain his Intercontinental Title after 25 minutes of amazing action.

If you want to be picking about this match, Shawn failed to grab the title on his first try in this one. That’s a very valid point, but I don’t see why one small gaffe should mean that this match was worse.

This match went seven minutes longer than the WrestleMania 10 match, the time was used wisely, they told more of a story (Razor attacking Shawn’s knee for example), they built off history and the crowd was hot the entire time.

No matter how you rank it or whether you think their WrestleMania 10 match was better, there’s no denying that Shawn Michaels vs. Razor Ramon at SummerSlam 1995 will always be remembered as a true classic.

Here’s my full review of the match from SummerSlam 1995. Just a reminder that all of our SummerSlam reviews are in the SummerSlam section right here on TJRWrestling.

(Pre-match notes: Both guys were faces. The original plan for this match was Shawn Michaels vs. Sid, which was advertised a few weeks before. WWE changed it because they realized they needed a great match and doing a Ladder Match rematch was a smart idea.)

They went at a fast pace early with Shawn nearly hitting a superkick and Razor nearly going for the Razor’s Edge, but they were each able to avoid the big moves. Hard whip into the corner by Ramon sent Michaels over the top to the floor. Michaels went after him in the aisle and they battled on the apron with Ramon hitting a suplex that caused Shawn’s left leg to hit the railing. That looked nasty, but Shawn was fine. Back in the ring, each guy went for finishers and did a double clothesline to knock down both guys. Ramon used his power to take control and hit a fallaway slam off the middle rope. That allowed Razor to grab the ladder that was in the aisle as Sid was shown watching backstage. Ramon set up the ladder and Michaels knocked him down. Michaels picked up the ladder to set it up and did it so that he inadvertently hit Ramon with it. They did the full moon spot with Razor pulling down the tights when Shawn was climbing and then Razor pulled Michaels off the ladder leading to a hard bump to the floor. Ramon stomped on the knee and also slammed the left knee of Michaels against the ladder, which was on the mat. Razor hit Michaels in the back of the leg with the ladder in another one of those inadvertent ladder shots. Ramon slammed Michaels onto the ladder so that his left knee hit hard against the ladder. As Ramon worked on the leg, Michaels kicked him away and sent him into the ladder that was up against the turnbuckle, so Ramon came back by tossing Michaels knee first into the ladder. Ramon kept on attacking the left knee for another few minutes. Ramon teased setting up the ladder and ended up shoving it onto Shawn’s left leg. Ramon set up the ladder, went to climb and Michaels went to the middle rope and connected with a double axehandle to the back.

Ramon brought a second ladder from under the ring. Michaels set up the original ladder. Vince was freaking out about how he had never seen this before. It was the first time they had done this in a match. Michaels went up the ladder, Ramon hit him in the back and Ramon hit a Razor’s Edge that took him down. Vince wondered if there was a “legal ladder” and if it matters. Each guy set up a ladder to climb with Razor starting his climb first. Razor got his hand on it, but Michaels hit a superkick to knock him down. Shawn made it to the top of the ladder and reached up for it, but he couldn’t reach it. Shawn went crashing to the mat. Razor teased a Razor’s Edge, but Shawn countered with a back body drop to send him over the top to the floor. Shawn set up the second ladder, did a slow climb and grabbed the title. Shawn couldn’t grab it, so he was pissed as he tossed the second ladder down. Shawn climbed up again and you can tell the ladder was lowered for him because Shawn reached it from the third step from the top. Michaels reached up and grabbed the title to a huge pop to retain the gold at 25:04.

Analysis: ***** Amazing match. Five stars out of five. I’ve seen it many times and enjoy it just as much as I did the first time. The action in the match was spectacular right from the start. There’s a spot where Razor suplexes Shawn over to the top to the floor that HBK takes on the knees, which is crazy to do and it’s no shock that he had knee injuries when you see a bump like that. There were some cool counters by Razor where he avoids the baseball slide ladder shot to the ribs and the splash off the ladder, which were both prominent spots in the WM10 ladder match. They also mixed in psychology with Michaels hurting his knee and Razor worked it over very well. If you want to be picky about this match, Shawn failed to grab the title on his first try. That’s a very valid point, but I don’t see why one small gaffe should mean that this match wasn’t a near perfect wrestling match. I love this match.

Analysis Bonus: The ladder match between them at WM10 gets more praise, but I think this is the better match. I think one of the reasons why people like the WM10 match more is because it happened first, plus things at WrestleMania are usually glorified more. Others point out that Shawn failed to grab the belt on his first try in this one. That’s a very valid point, but I don’t see why one small gaffe should mean that this match was worse. This one went seven minutes longer, the time was used wisely, they told more of a story (working over Shawn’s knee for example), they built off history and the crowd was hot the entire time. A true classic.

You can watch the full match below.