Welcome one and all to a special edition of the NXT Spotlight here at TJRWrestling. This past Saturday, NXT had their latest Takeover event, and from all accounts, they once again knocked it out of the park. Our fearless leader, John Canton, gave another 5 star rating to Gargano vs. Ciampa in his detailed NXT Takeover Chicago Review and had two other matches ranked very highly. Since I wasn’t able to cover it live, I wanted to put some thoughts down on the show and where the brand goes from here as we head towards the biggest show of the year for NXT, Brooklyn. I’ll also touch on the two TV matches that took place this week on NXT TV. The shows immediately after a Takeover are 80-90% filler, so I don’t need to dedicate a full column to it. Let’s get the show on the road. 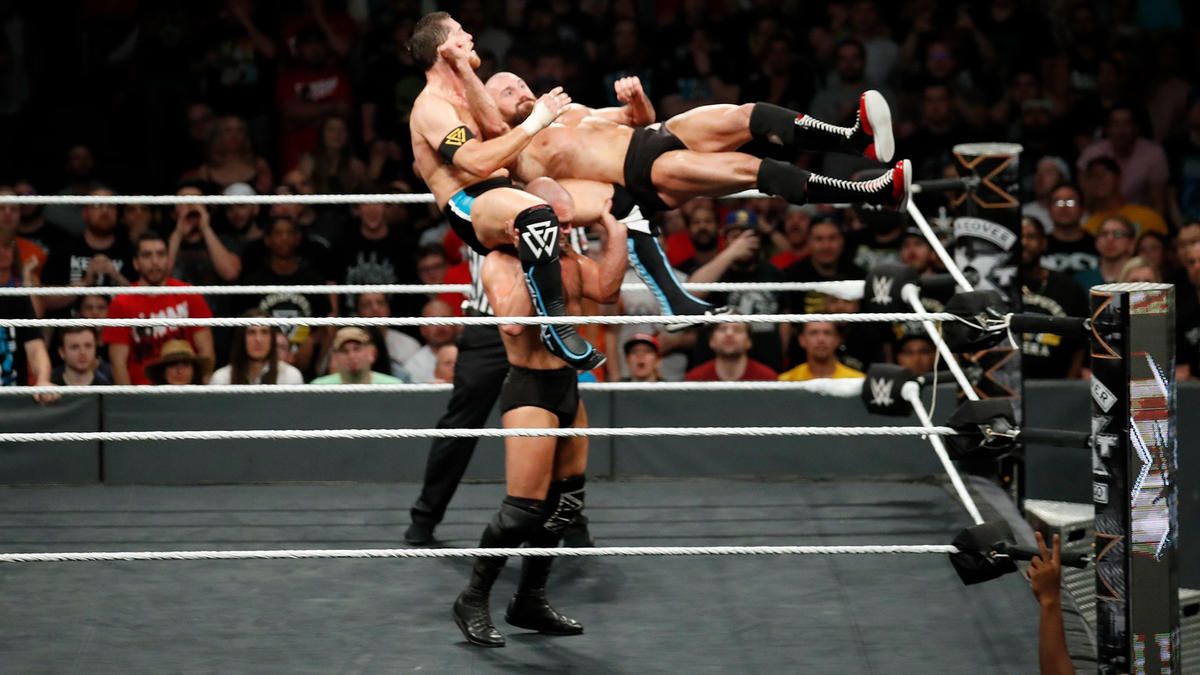 John gave this match 4 stars and I would give it the same. Although based on recent events that took place after Takeover (I will not spoil anything for those that plan to watch the UK Tournament next week) I feel less strongly about this match. It really felt like it made Burch and Lorcan as a credible team and they could be on to a long, successful run. Hopefully, that’s still the case. I really appreciated the production call to leave the camera on the challengers after the match and let the standing ovation be seen. After a performance like theirs, the ovation was a given, and I’m glad the Chicago crowd did not disappoint. I noted in our preview that I thought this would be the hardest hitting match besides the Street Fight and that held true. Burch was bleeding from the top of his head at one point and all 4 men were sweating profusely, a sign that they were leaving every ounce of energy they had in that ring. Lorcan’s bump off the top rope onto the apron looked incredibly painful. They were pulling out all the stops for sure.

The nearfall with Cole interfering and ultimately getting ejected was done brilliantly. The only problem is, Cole was already not on the card so the crowd wanted to see him in any capacity, and when he gets ejected, the crowd reaction isn’t what you want it to me. The men in the ring worked hard to get the crowd back focused on what they needed though, and that’s a credit to their work rate. I hope these four get more chances against each other, but HHH may have other ideas. Time will tell. 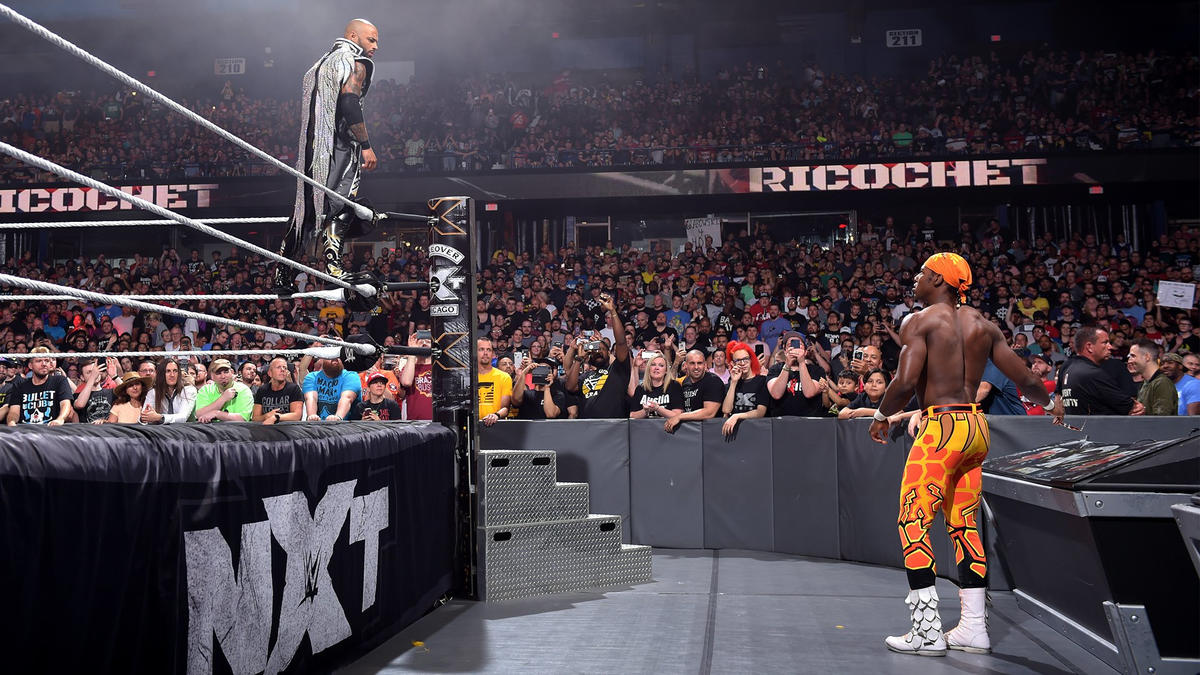 John had this match at 4.5 stars and I’d have to agree with that as well. I was tempted to say this is a five star match, but this is only the first encounter. They’re only going to get better against each other and so I want to leave room for improvement. This was borderline perfect though. Right from the jump, Dream coming out like Hogan and then Ricochet, who idolizes The Rock and is a personal favorite of The Rock, doing the Hogan/Rock staredown from WM18 was tremendous. Just pure charisma and great storytelling. Everything about this match was “what you can do, I can do better”, and they did an incredible job telling that story. Dream going for the cartwheel DVD off the turnbuckles was incredible, and I know he can land that cleanly at some point. When he does, the pop will be off the charts. As painful as Lorcan’s bump on the apron looked, the superplex off the turnbuckles to the floor outside made that one look like a normal flat back bump. There is so much trust involved in a spot like that and a credit to both men willing to do that to add to the story. The finish was jaw dropping with the distance both men were trying to cover from the top rope, and then Ricochet punctuating it with a 630.

I said in the preview I hope this becomes our version of Austin/Rock or Cena/Orton in terms of length and two men that just can’t be separated from each other for long. If we’re that lucky, we’re off to a great start. 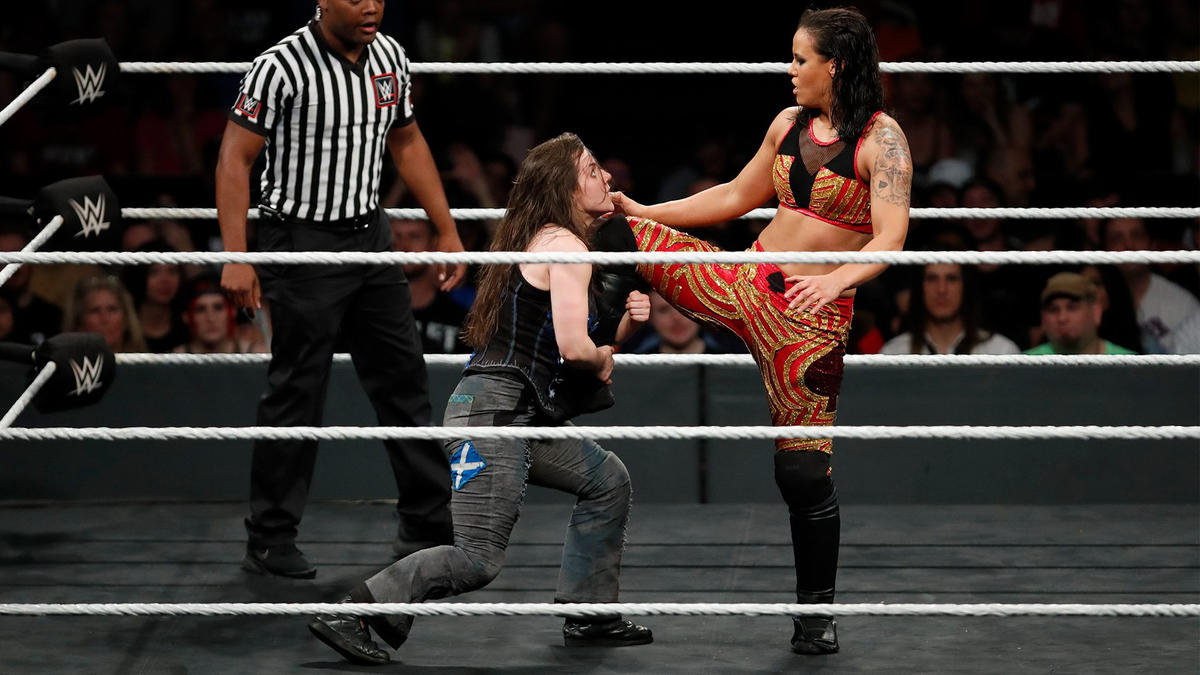 This is the one match on the card I had a serious problem with. John gave it 2.5 stars and I’d be hard pressed to give it two. The only reason I’d give it that much is because of how great Nikki is at her character. There was nothing wrong with the workrate either, as I thought both women did their best. My problem is we’re in the middle of this huge women’s revolution and at every turn, something new and historic is happening. But on a show that went 2:37 with only 5 matches, we can only give these two eight minutes? We can’t find a way to give them at least 10 minutes? That’s a real shame to me. It’s obviously hard to tell Gargano/Ciampa to take 3 or 4 minutes off their match given what they did, but I think between the tag titles, Dream/Ricochet and main event, there’s five minutes we can give to these women to really dig into their story. Another brilliant ending with Nikki embracing her fate and enjoying the sweet surrender to Shayna. Shayna did a great job of acting like she had been taken to her limit despite the short match length. The crowd wanted Nikki to win and there’s no denying how popular she is.

The more I thought about it, the more I was glad Nikki didn’t debut on Smackdown with Sanity. She’s her own entity and doesn’t really fit with where that group is headed now. I’m hopeful with the fact that she didn’t tap out and she didn’t immediately go to Smackdown, that there’s another title shot in her future. I’d love to see her in another Last Woman Standing type situation against Shayna, as her match with Asuka is when she had her breakout moment. 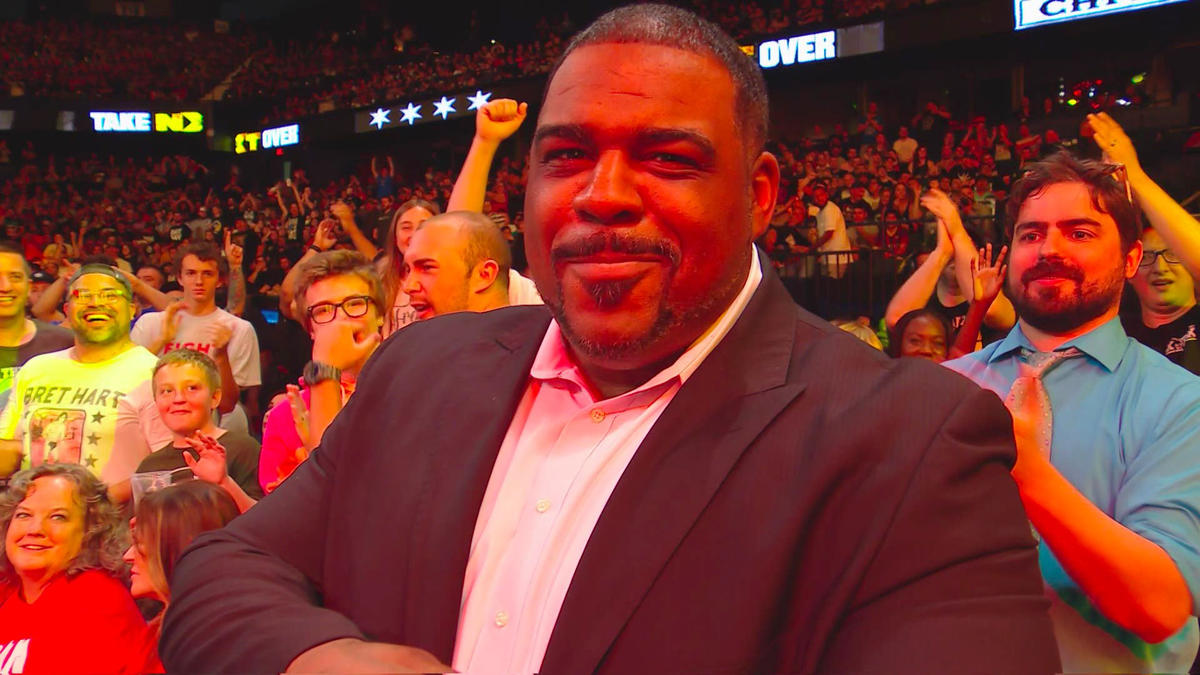 In between these two matches was possibly my favorite moment of the show. Bask in His Glory, as Keith Lee has debuted with NXT. For long time readers of mine, you may remember him as a guest on The Match Beyond podcast. I have been a fan of this guy for quite a while and have been fortunate to stay in touch with him since that interview. He’s one of the genuine good guys in the business and someone that is very easy to root for. He adds so much to an already loaded roster and I immediately go to the possibilities of what he can do. He’s battled the likes of Ricochet before, he and Donovan (Chris) Dijak had matches that you absolutely need to go out of your way to see, and then there’s the likes of Lars Sullivan that he’s never faced, but you would think could be an epic encounter between these two. I’m so ridiculously happy for him and can’t wait to see how NXT uses him. 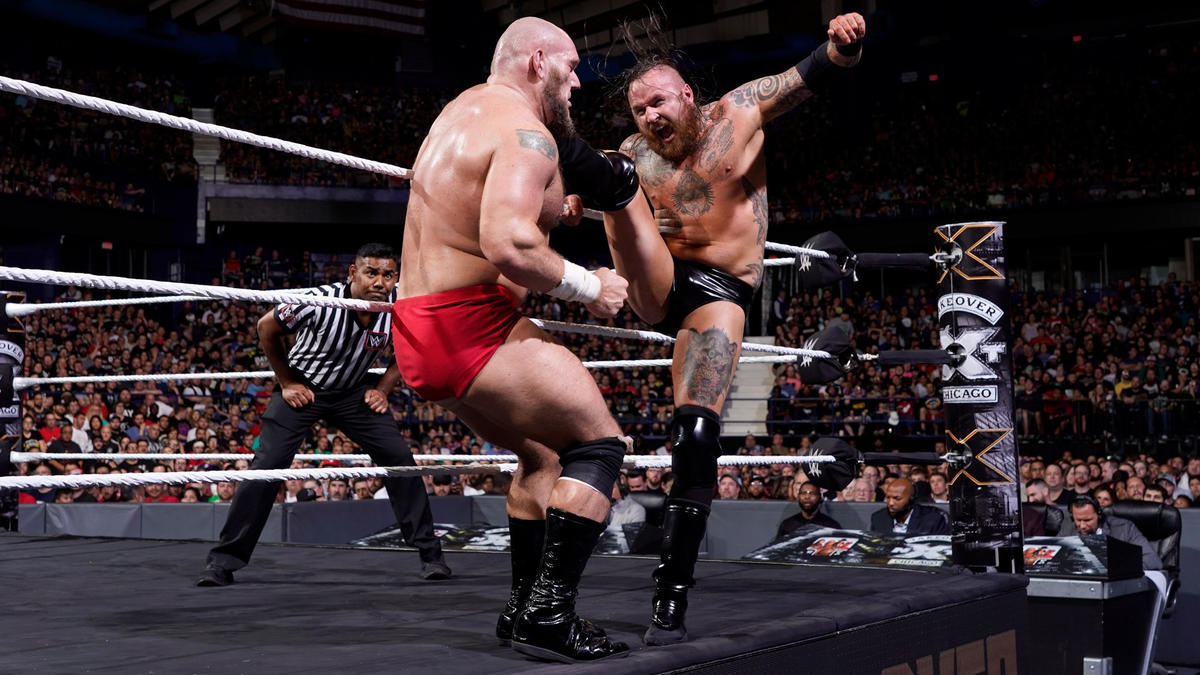 John gave this 3.25 stars and I would probably go with just an even 3, if not a tad less. I felt like these two worked hard and there’s some potential for great chemistry between the two, but it felt a little clunky to me and felt like both men were working uphill the entire time. Rough spot when Black went for Black Mass and whiffed completely. Lars tried selling it, but it just didn’t look good and the crowd let them know that. It felt like the air was let out of the crowd after that spot. Lars has a ton of potential and I expect big things from him still, but I still stick to my original thoughts before the match, that he just wasn’t ready for a title shot. Hopefully, EC3 can step up in that challenging role now, since he was shown before the match. I just don’t sense, even as popular as he is, that the NXT crowd senses him as “the guy”. I think the majority of them expect Johnny Gargano to win the feud with Tomasso Ciampa and then go for the title. That almost makes Black feel like a transitional champion, even though he’ll have the title for a few months. 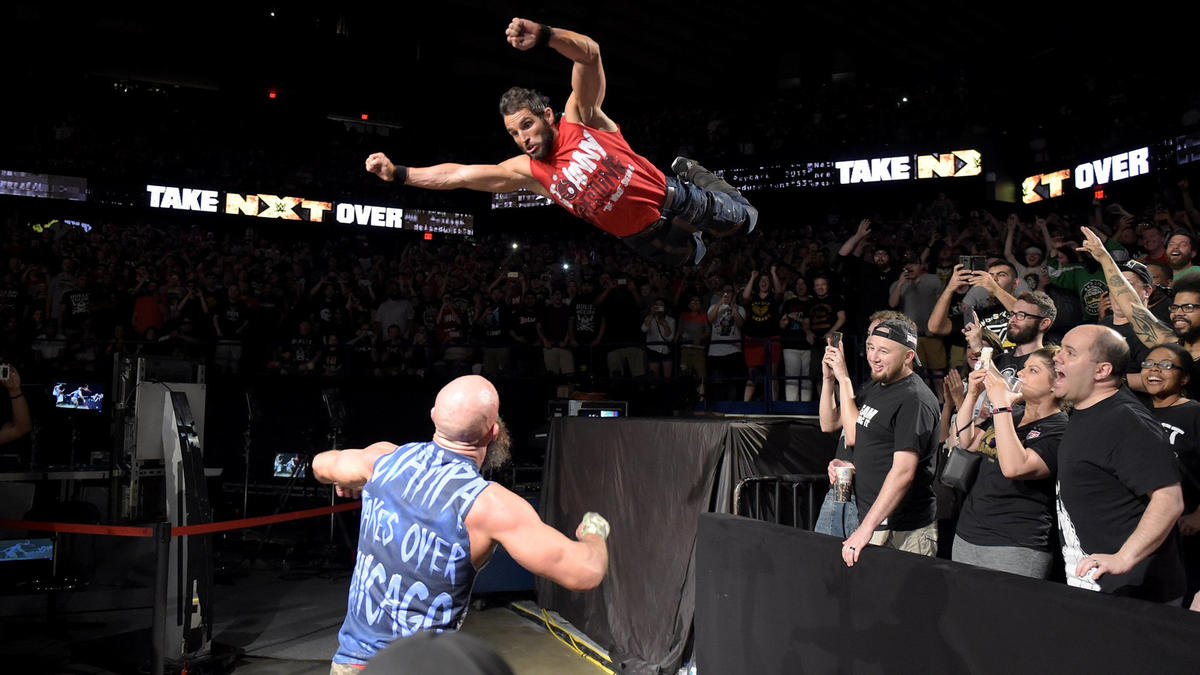 Five stars, 6 stars, give this as many stars as you want. These men gave you everything they had in their bodies for 36 straight minutes. They hit the gas from the opening bell and never stepped off it. The no blood policy really hurts in situations like these. Maybe a lot of you will disagree with me, but as great as that match was…and it was GREAT… one of my first thoughts after the match was, “I can’t believe no one bled in that.” I’ve gotten accustomed to the no blood policy, even though I shouldn’t have to, but in a match this violent and personal, there just should be blood in it. The greatest attribute of these two men is they make you feel everything they do and say. The moment when Ciampa spit on the wedding ring of Gargano and tossed it, it made the hair on my neck stand up. I’m surprised Candice didn’t play more of a role in the match, but it’s probably better that she didn’t. The finish was predictable in the sense that they would’ve have exposed the ring without using it for something, so you knew the stretcher job wouldn’t be the end. But the set up was outstanding and getting Gargano in the perfect position to looking like nothing will stop him in that match but in a split second everything changed… I’d like to think HBK’s hands were all over that finish.

We’re clearly headed for a 3rd and decisive match, so I’ll say it again. Please let it be the first NXT Hell in a Cell. Another option I thought about that WWE doesn’t do very often, but would be perfect for NXT, 3 Stages of Hell. Watch HHH vs. Austin from No Way Out 2001 or HHH vs. HBK from Armageddon 2002 if you haven’t seen one of these matches. 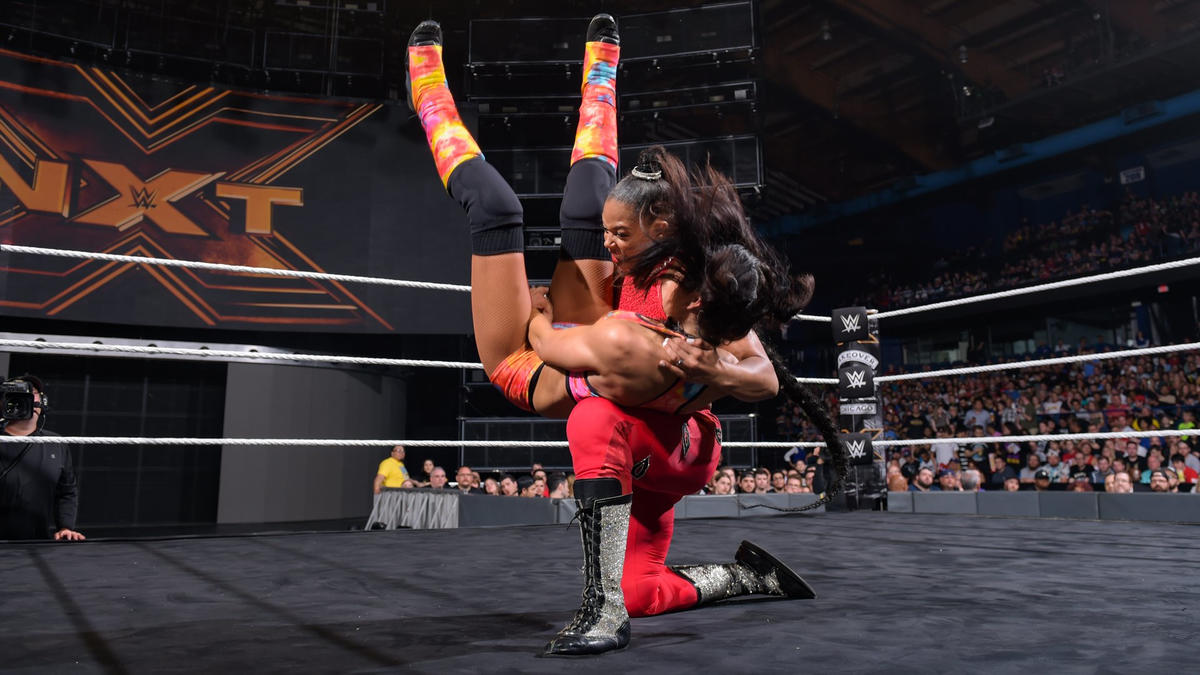 The two matches were War Raiders vs. The Mighty and Bianca Belair vs. Dakota Kai. Both matches went as you would expect. The Mighty had a new look to match their name and personality change, but War Raiders took care of them pretty decisively. I would expect this pairing to continue against one another though. Bianca Belair defeated Dakota Kai, which is no surprise with Belair clearly in the middle of her first push. Belair brought back her hair whip, which had been noticeably missing as of late. I’m interested to see how long they hold off on Belair challenging for the title as there’s no real established babyface women on the roster that can keep her occupied.

That’s it for this week. I appreciate you all stopping by and checking out my thoughts on a successful venture to Chicago for NXT. I’ll be back next week, which will take place after the UK Tournament, so there will be news there and new shows from Full Sail. Until next time, don’t do anything I wouldn’t do, but if you do… name it after me!