Worry not for I have returned with another edition of the Top Ten Wrestling Stories of the Week.

10. WWE Reportedly Only Signing Women who are 25 or Under

WWE is reportedly starting a new controversial recruitment directive. This week it was reported by the Wrestling Observer that WWE will only be recruiting female talent that are 25 years of age or younger. WWE just released seven women who were all in their 30’s last Thursday. This report, of course, angered many people including Jerry Lawler, who thought 25 was way too old. (TJRWrestling)

9. Liv Morgan Becomes the Number One Contender for the Raw Women’s Championship

Becky Lynch has a new contender for her Raw Women’s Championship. This past Monday, the Raw Women’s Survivor Series Team of Bianca Belair, Carmella, Liv Morgan, Queen Zelina Vega and Rhea Ripley faced each other in a Fatal 5-Way to decide a new number one contender for the Raw Women’s Championship. The finish of the match saw Morgan pin Carmella to get the win. Morgan winning the match was unquestionably surprising, as she is 27 years old and therefore seemingly too old to be suddenly getting a push.

One of the biggest names in Japanese wrestling history may be coming to AEW. This week before Dynamite, AEW tweeted out a backstage segment between The Best Friends and Rocky Romero. During the segment Romero let The Best Friends know that he had been talking to NJPW’s Kazuchika Okada and wanted to invite them to join the NJPW faction CHAOS. The Best Friends accepted the offer. With Tony Khan later confirming on Twitter that the Best Friends have joined CHAOS, while name dropping Okada. We will have to wait and see if Tony Khan can now figure out how to convert the US Dollar to Yen with his father’s checkbook, so we can finally see Okada in AEW.

Okada has spoken. @orangecassidy + the Best Friends are in CHAOS. Rocky, think this is the beginning of a beautiful friendship.
Thank you to you fans who support pro wrestling! See you all TONIGHT for some great wrestling on #AEWDynamite LIVE on TNT @ 8pm ET/7pm CT/6pm MT/5pm PT!

7. The Rock Says He May Wrestle Another Match

The Most Electrifying Man in Sports Entertainment may compete in the ring once again. This week Rock did an interview with comicbook.com where he stated: “I think possibly, you know, there might be another match down the road. It would have to make sense.” The Rock hasn’t competed in an official match since beating Eric Rowan in six seconds at Wrestlemania 32 in 2016. His last real match was three years earlier at WrestleMania 29 against John Cena. Unquestionably the match that makes the most “sense” for The Rock right now is with his cousin and Universal Champion Roman Reigns. We shall have to wait and see if The Rock and Reigns ever happens, or if The Rock will just choose to come back to completely squash a young superstar’s career in six seconds again instead. (TJRWrestling)

6. Becky Lynch Says She Does Not Trust Charlotte Flair

At least one scheduled match at Survivor Series may be interesting this year. This week in an interview with Sports Illustrated, Becky Lynch stated that things backstage are difficult between her and Charlotte Flair and she does not trust her right now. Lynch when on to state that they used to be friends, but aren’t anymore.

“When you’ve got two people that are wanting to work together to make magic, then you make magic. Sometimes when there’s hostility, when you can’t trust the person, then you never know what’s going to happen. You always have to be on guard. It’s like a game of chess. You have to be thinking two steps, three steps, four steps ahead. What are they gonna do? How am I gonna handle it? If they do this, if they do that, whatever.” – Becky Lynch

Lynch and Flair recently reportedly got into a backstage argument after the two exchanged championship titles on Smackdown. Lynch and Flair will now have to try to put their differences aside as they face each other on November 21 at Survivor Series. To make this situation even worse, WWE just released the two other best women wrestlers in their company in Nia Jax and Eva Marie, so they have nothing to fall back on if Lynch and Charlotte can’t get along. (TJRWrestling)

NXT 2.0 is set to have its first PPV. This week during NXT 2.0 it was announced that NXT: War Games will be taking place on Sunday, December 5th. Noticeably missing from the announcement was the “Takeover” name which for the first time is not in the title of an NXT PPV. Also missing from the announcement was which of NXT’s 50 new wrestlers will be competing on the show. (TJRWrestling)

It looks like Kevin Owens will be a heel at least until his WWE contract is up in January. This past Monday on Raw saw Owens facing Seth Rollins in the main event, while Big E watched from ringside. The finish of the match saw Owens get counted out when Big E accidentally blocked him from getting back in the ring. After the match, Owens snapped and brutally attacked Big E. We will have to see if this heel turns leads to a push and possible title run for Owens, or if Tony Khan is getting another big present under the Christmas Tree this year. (TJRWrestling)

3. WWE Announces The Men’s and Women’s Elimination Matches on Twitter

WWE has decided to do the build up for Survivor Series a little differently this year. Usually, the Raw and Smackdown before Survivor Series are filled with qualifying matches to find out who will be representing their brands in the elimination matches. Last week on both Raw and Smackdown, Survivor Series was pretty much ignored, with no mentions being made about the elimination matches. This suddenly changed on Saturday, however, when WWE suddenly announced both teams for the Men’s and Women’s Elimination Match on Twitter.

For the women, it will be Bianca Belair, Rhea Ripley, Liv Morgan, Carmella and Queen Zelina Vega representing Raw to go against Sasha Banks, Shayna Baszler, Shotzi, Natalya, and Aliyah who are representing Smackdown.

For the men, it is Seth Rollins, Finn Bálor, Kevin Owens, Rey Mysterio and Bobby Lashley for Raw going against Drew McIntyre, Jeff Hardy, King Xavier Woods, Sami Zayn and Happy Corbin representing Smackdown. Dominik Mysterio was originally on the team, but lost his spot to Lashley this week on Raw. Announcing the teams on Twitter may seem lazy and anticlimactic, but please try to remember that the writing teams probably don’t know who will still be on the roster in two weeks. (TJRWrestling)

It took a while for WWE to get around to it, but they announced this week that Survivor Series on November 21st will once again feature champion vs. champion matches. Smackdown Women’s Champion Charlotte Flair will face off against Raw Women’s Champion Becky Lynch. Also, WWE Champion Big E will go one on one with Universal Champion Roman Reigns. It is also likely but not yet official that United States Champion Damian Priest is facing Intercontinental Champion Shinsuke Nakamura as well as Smackdown Tag Team Champions The Usos facing Raw Tag Team Champions RK-Bro. There is also a chance that the 24/7 championship will be defended against its greatest rival – the audience’s intelligence. 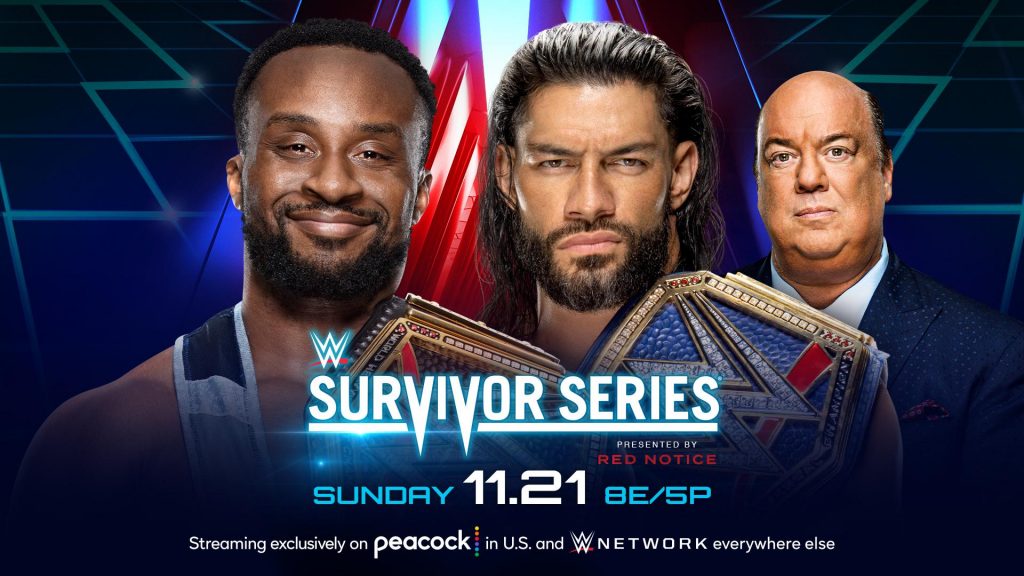 All Elite Wrestling’s PPV Full Gear is set to take place this Saturday, November 13th at 8 PM ET. The show is jam-packed with great matches including Bryan Danielson facing Miro in a number one contender match. CM Punk will try to continue his undefeated streak against Eddie Kingston. MJF and Darby Allin will compete to see who is the true future of AEW. Christian, Jungle Boy and Luchasaurus will challenge Adam Cole and The Young Bucks in a Falls Count Anywhere Match. The Inner Circle will challenge Ethan Page, Scorpio Sky and American Top Team in a Minneapolis Street Fight.

Besides these matches, there will be three title matches. The Lucha Bros will attempt to defend the AEW World Tag Team Championships against FTR. Also, Britt Baker will defend the AEW Women’s Championship against Tay Conti. Finally, Hangman Adam Page will try to finally become AEW World Champion when he faces Kenny Omega. Interestingly this will also be the first AEW PPV to not have a former WWE superstar in the main event. Of course, that could change if Tony Khan can pull off the ultimate Hail Mary, and somehow gets the biggest free agent in wrestling Eva Marie to show up. (TJRWrestling)

That will conclude another edition of The Top Ten Wrestling Stories of the Week. Thank you for taking the time to read this each week. Although I often joke, I have recently started refereeing with NYCW and respect more than ever what wrestlers do every week. I wrote an article all about it earlier in the week too. If you like what I do, despite my jokes being almost as bad as the build for Survivor Series, then feel free to listen to my brand new podcast The Smark and the Noob and follow me on Twitter @Fowlerwrestlin1 as well.