I attended the WWE Raw “Road to WrestleMania” live event in my hometown of London, Ontario on Sunday night. We usually get one or two house shows per year. The Raw crew was in Oshawa, Ontario the night before (about 2.5 hours away) and headed to Detroit after the show for Raw, which was a 2-hour drive for them.

The crowd was lively all night long for a show that started at 5pmET. The start time is a bit early, but it was Sunday and the Fastlane PPV was starting on WWE Network at 8pmET, so it’s understandable why it started at 5pm. Due to it not being a night show and it’s March break week for kids, there were a lot of kids in the crowd.

I would guess the attendance at around 6,000 people in an arena that holds about 10,000 for hockey. It’s a good crowd every time WWE comes here. We were fortunate enough to sit in row two (thanks to a connection in WWE that I have) for the first half and since nobody sat in row one, we moved up for the second half of the show. Here’s a rundown of the eight matches with photos from me and Steve “Melo Man” who does my graphics for this site.

The ring announcer for the show was Vic Joseph of 205 Live.

Goldust started the show with a promo. He talked about his career, spoke about wrestling John Cena last week and then did a heel promo against the fans. Matt Hardy was the opponent. It was a standard match between two veterans. Hardy was over with the “delete” chants of course. Hardy won clean with the Twist of Fate. 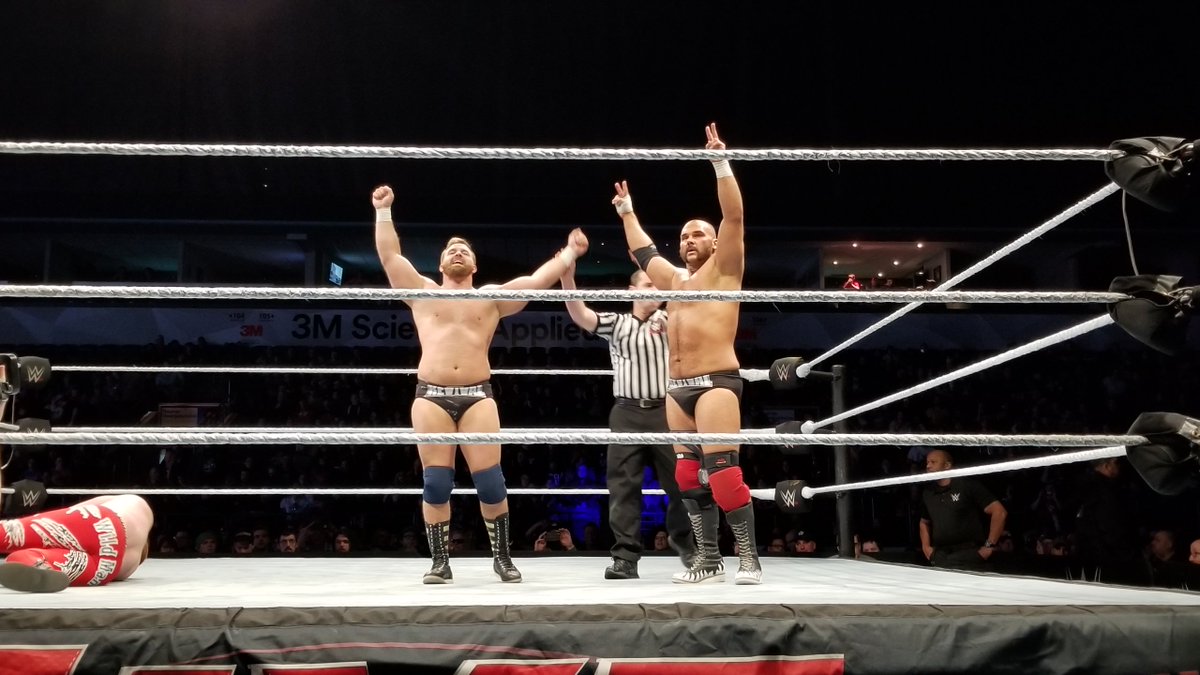 The crowd was supportive of Slater early on with “He’s Got Kids” chants. Plenty of old school heel tricks by The Revival. There was a funny moment when Dash Wilder of The Revival said “piss off” to one of my friends. The end of the match saw The Revival win clean with the Shatter Machine double team move. It’s one of the best finishers in the business.

This was the lone cruiserweight match on the card. They wrestled at a slow pace early with a lot of holds on the mat and there wasn’t much of a reaction. As they got going some more, they did some more aerial stuff. Alexander hit the only suicide dive of the show as he took out TJP on the floor. Some fans chanted “this is awesome” for them, which was a little much because while it was good, I wouldn’t go that far. Alexander won with the Lumbar Check. It felt like it went about 15 minutes, which was one of the longest matches of the show.

The heels isolated Anderson for most of the match. Great tag team work from Sheamus and Cesaro like usual. My buddy Steve told Sheamus he loved his work in the Teenage Mutant Ninja Turtles movie and Sheamus said “thank you” so that was funny. Wrestlers like that stuff. You can’t do that with the wrestlers on TV, but at a live event it’s fun. Gallows got the hot tag for his team, so things picked up from there. In the end, Sheamus hit a Brogue Kick on Anderson while Gallows was chasing Cesaro in the aisle. Sheamus covered Anderson for the win.

Elias did a song pre-match ripping on the city and the people in it. The crowd was definitely into cheering when he asked “who wants to walk with Elias?” and when he asked what WWE stands for everybody was chanting “Walk With Elias” like usual. Braun Strowman got a massive response from the crowd.

The match went about five minutes with Elias getting in a bit more offense than I expected. Strowman won clean with a Running Powerslam. After the match was over, the crowd chanted for Strowman to do it again, so Strowman grabbed Elias in the aisle, he sent Elias back into the ring and Strowman hit another Running Powerslam. The crowd loved that.

There was a kid beside us that had a sign saying it was his first WWE live event. After the match, Strowman walked over and signed it for the kid. Strowman was great with the kids around ringside. Love to see stuff like this. I tweeted Strowman about it and he replied.

There was a 15-minute intermission after that match. That meant five matches before the break and three matches after the break.

The result was no surprise with Hawkins involved. There was no Titus O’Neil with Apollo representing Titus Worldwide, but Dana Brooke was there looking incredible. There were some funny moments where Brooke teased kissing Hawkins and Apollo punched Hawkins when she got Hawkins to close his eyes. Apollo got the win with his spinout spinebuster. After the match, Dana kissed the ref on the cheek.

The pic above is the ref getting the kiss on the cheek. It also shows Hawkins in that position for about one minute after the match. It was pretty funny.

The champ @AlexaBliss_WWE and the legend @MickieJames the others don’t matter. #WWELondon#WWELondonONpic.twitter.com/nrm6vvYIrU

It was disappointing that this wasn’t a tag match, but I assume they opted for the 3-Way to get another title match on the card since they had so many other tag matches. Mickie (my fave person on the show, of course) was looking amazing in regular clothes at ringside. At one point, Mickie grabbed Bayley in front of the ref and Mickie broke up a pin later. One of the faces (I think Banks) knocked Mickie out of the ring, so Mickie tumbled to the floor. Bliss managed to get the win by getting the ROLLUP OF DEATH~! on Banks.

After the match, the crowd was cheering for Bayley to hug Banks. Bayley was right in front of us saying “no” to that. Banks wanted a hug from Bayley, but Bayley just shoved her away and left on her own. The crowd was really into this match treating the women like major stars, which is great to see.

Great pic of @WWERollins@FinnBalor@WWERomanReigns noticing the sign of the kid beside us telling them it was his first live event. #WWELondon#WWELondonONpic.twitter.com/TjxkSKIwde

The Miz got the most boos of the night. Balor and Rollins got good ovations. There was a mixed reaction for Reigns, but it was loud as usual. As the match went on, Reigns was cheered a lot by the crowd wanting him to make the hot tag. The funny thing about this match was that The Miz kept teasing taking off his jacket and the crowd booed him for taking so long. Throughout the match, Miz kept doing comedy muscle poses. Reigns, Balor and Rollins were laughing while on the apron. That’s the kind of thing that I love at a house show where guys can just have fun and joke around. Reigns got the win for his team with a Spear. I didn’t time it, but it felt like it went around 15 minutes. All six guys had black gear on, which is not uncommon in today’s WWE. The result of this match was no surprise obviously.

After the match, Reigns, Balor and Rollins went around the ringside area to shake hands with fans, take selfies and sign autographs as well. Every time I go to a WWE live event, whoever goes on last does that and it’s great to see them make the kids happy to end the night. The show ended right around the 3-hour mark.

It was a good show. It wasn’t the best house show I’ve been to, nor was it the worst, but we had a great time and that’s what matters more than anything. The show was bit tag match heavy with three matches out of the eight as tag team matches. It gets repetitive after a while. I get why WWE does it to get more people on the shows and it allows the talent to have an easier night if they wrestle in tags.