They aren’t friends. They aren’t even partners. They are brothers. And at All Elite Wrestling’s inaugural event Double or Nothing on Saturday, May 25th, the story fans were witness to involving Cody and Dustin Rhodes couldn’t have been told any better. The match wasn’t the greatest match ever, but in the minds of some, it was the best match they’ve ever seen from Cody and was also the best match they had seen from the man formerly known as Goldust in some time. This match was more than just a do-over of a match that took place four years ago.

Before the match began, we saw promos that had previously been on the Nightmare Family YouTube channel explaining the legacy of Dustin and Cody, how they each had their own dreams of grandeur and success. The poignant video showcased the brothers through the years as music played. The video immediately preceded the match, which took place about an hour and a half into the show.

Operatic music played with the lights out as a spotlight then illuminated a throne with a familiar-looking symbol forming the back and skulls on poles surrounding it.

The symbolism could not be missed and the message being sent was clear. On the screen, it said ‘Wrestling has more than one royal family’. Cody came to the stage, studied the throne and then looked at his wife Brandi, who was accompanying him. While he soaked in the adulation from the fans, Brandi got a sledgehammer from under the ring and handed it to her husband, who used it to destroy the throne.

As he stood in the ring the fans chanted his name, but his focus was on someone that wasn’t just his opposition, but a legend. Dustin Rhodes came to the ring, a veteran of thirty years, seeking respect from someone he believed looked up to him when he was younger. The story being told here ignores the fact that these two faced each other in 2015 while with WWE. Clearly, the match that happened then didn’t tell the kind of story they knew could be told.

For anyone that has ever had an older sibling they felt pressured to not only match but surpass, this match was their story writ large. It pulled from their past and had emotion throughout. Brandi was an active part, and when she came to Cody’s aid, Dustin’s sister in law being apart just added another layer to the issues between the brothers. But after she delivered a spear to Dustin outside the ring with her ‘bionic’ shoulder, referee Earl Hebner ejected her from the ringside area. Diamond Dallas Page then came out and carried her to the back when she was slow to exit.

Adding to the nasty, personal tone of the match, Dustin was busted open early and bled profusely throughout. This was a result of Cody removing the middle turnbuckle pad and his brother hitting his head on the exposed steel. As he administered a beating to his older sibling, Cody wiped blood across his own chest. The liberal flow of blood was like you would expect to see in one of Dusty Rhodes’ legendary matches with Ric Flair. Dustin was seemingly blinded and thus easy prey for his little brother. However, after Cody missed with a double ax handle, Dustin caught him with a power slam. Cody came back with a figure four, something else that was frequently featured in their father’s matches.

The blood spilled seemed to be staining the entire canvas. Cody removed the weightlifting belt he had worn throughout the match and was going to whip his older brother.

However, Dustin turned the table and we got a bare-bottomed Cody whipped by his older brother. The symbolism of the older brother spanking the younger one played well into the overall story. The ageless Dustin hit Cody with more contemporary moves, such a ‘Code Red,’ which is a sunset flip into a powerbomb. He then followed that up with a superplex off the top rope. Cody recovered and utilized some dastardly tactics to slow his brother’s momentum, hit a disaster kick and then a crossroads, but when he went for the pin, Dustin kicked out! Blood, sweat, and tears couldn’t be more fitting to describe this match.

Dustin hit a crossroads of his own and his younger brother kicked out. Both men got to their feet and exchanged punches and kicks. The fans in attendance chanted them to ‘fight forever.’ Cody picked up Dustin and dropped him with a vertebreaker type maneuver. He hit another crossroads and pinned his older brother for the three count. Cody rolled out of the ring and started to walk up the ramp, but then looked back to the ring with the blood of his brother on his hands.

He returned to the ring as Dustin sat in the corner, having been in the midst of unlacing his boots, and Cody asked for a microphone.

Fans applauded, thanking Dustin. Cody asked for quiet and then said to his brother ‘You don’t get to retire here,’ and said he has to ask him for a favor in front of God and the whole world. He told Dustin that before there was an AEW, he put his name down for a tag team match pitting himself and a partner of his choosing against the Young Bucks. His voice choked with emotion Cody said he doesn’t need a partner or even a friend, he needs his big brother. As they left the ring, Cody held the ropes open for his brother as a show of respect, and the two went up the ramp with arms around each other’s shoulders with the fans cheering on in the background.

How did it happen? How can a match that fans weren’t looking forward to universally get loudly cheered throughout? A number of different factors come into play here. One factor is a patriarch and legend to whose memory the match was dedicated. The late Dusty Rhodes had been part of the rivalry between Cody and Dustin back in 2015. But that was paid off in a match that went less than eleven minutes and didn’t fully capture what both are capable of doing. On Saturday, May 25th, these sons of a son of a plumber did just what they had set out to do, and more. They evoked emotion and made fans care. This match was everything the Stardust/Goldust match should have been and more.

There was symbolism throughout the match, like the blood spilled by the older Rhodes at the hands of the younger one. How often do older siblings beat up their younger pesky brothers? Younger siblings that have been pushed around could find redemption in Cody’s actions. And Brandi Rhodes’ involvement could be reflective of a spouse getting between siblings.

This was more than just a match it appeared to be a goodbye letter to their father, and the fans knew it as they chanted ‘Dusty’ at the beginning and again at the end.

While some have opined that it was a love letter, that doesn’t seem completely accurate; the overall message was ‘We love you, Dad, and thank you for all you’ve done for us, we will keep the traditions and values you’ve instilled in us alive and well. Don’t worry, we have this covered and we will do you proud.’

It was a traditional grudge match with all the look and feel of today’s contemporary wrestling. Both men in their exchanges during the match hearkened back to their previous personas, much to the delight of those in attendance, but still were able to create a match that held a much greater meaning. Unlike before when the intent was for Stardust to denounce the Rhodes name, Cody was focused on killing an entire generation, and framed his brother as someone that represented that generation. It is true that during that period Dustin was pushing the envelope, at the risk of being ostracized because of it. What his character of Goldust did in the mid to late 1990s played on the insecurities of many. Today, Cody is a reflection of today’s society, embracing differences and diversity.

In this match, Dustin was fighting for the respect of his younger brother whereas Cody’s issue was not confined to his brother. Some have smartly observed that Cody’s request to Dustin after the match was not unlike when Dusty addressed a young Dustin many years ago, asking a young Natural to team with him, and that agreement was sealed with a hug and a kiss. Cody needed his older brother. Dusty needed his oldest son. While Cody is pushing wrestling into a new era with vision and hope, his older brother remains the go-between. Dustin is steeped in the traditions of his father while showing how proud he is of what his younger brother is doing.

The name of the event was certainly telling. The build for this match, and its presentation and execution, was like going in double or nothing: they would either generate little to no interest from fans and media, or they would create magic.

In the end, they proved that when you have real passion and fire, nothing can extinguish it. It was considered arguably the greatest match of Cody’s career. And it proved that while the blood that runs through the veins of the Rhodes boys is thicker than water, their love for one another makes it thicker than the thickest in any wrestling family today. 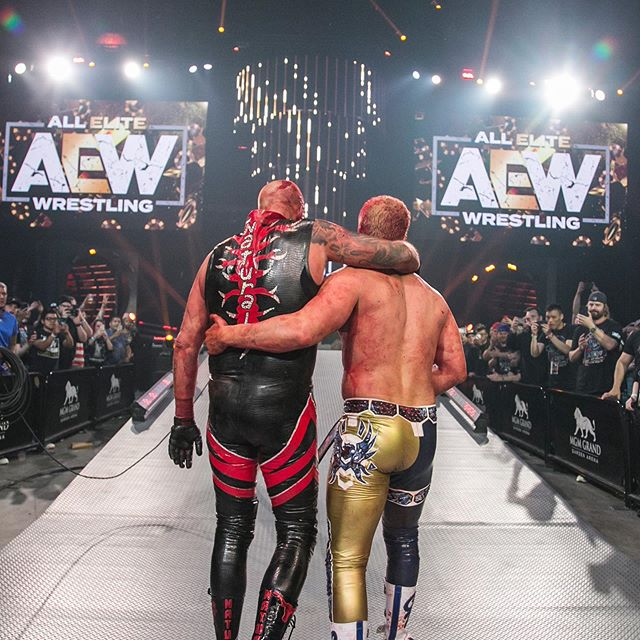