Welcome to the Raw Reaction, where I offer my take on this week’s show in Orlando. As always, you can check out John’s full in-depth review here.

We kick off the show with Promo Time with the returning Randy Orton. Riddle comes out and is happy that Randy is back but Randy is moving on from RKBro. Riddle sold like he just lost his best friend. AJ Styles and Omos come out to make fun of Riddle and Orton challenges Styles to a match. Styles accepts and Orton goes for an RKO on Styles who slips out of the ring. Orton tried to RKO Omos but gets tossed from the ring. Riddle tried and got smooshed into the ring by a chokeslam. Orton told Riddle that wasn’t very bright to close the segment. It’s nice to see Randy back. I would have figured he would have returned last week to save Riddle from Omos but this was okay. I still expect a tag title match at SummerSlam though.

Our first match has Smackdown’s Baron Corbin slumming on Raw for some cash as Jinder Mahal’s hired gun to take on Drew McIntyre. We have a logic break with Finn Balor easily handling Corbin in minutes on Smackdown while it takes McIntyre over ten minutes to dispose of Corbin. I guess you could say that McIntyre was toying with Corbin to make Mahal think McIntyre was going to lose. In the end, Corbin gets Claymored back to Smackdown. After the match, Mahal and company come to the stage but McIntyre has his sword to keep them there. Maybe we will have a sword fight at SummerSlam?

“No More Words” plays signaling that Jeff Hardy is back to give Karrion Kross his win back. This is how Kross’s debut match should have gone with Hardy bumping around while getting a little bit of offense in. The match was decent and Hardy made Kross look good.

The birthday girl, Alexa Bliss, is out next with Lilly only to be forgotten about for a good two minutes or so recapping the RKOBro history and a promo with the despondent Riddle. When we actually go back to the ring, Bliss is playing with Lilly in the ring. Doudrop entered with Eva Marie as Bliss’s opponent. The match was okay, given Bliss being involved. Sadly, Doudrop had to sell Lilly winking at her to get a sloppy roll up loss. I’m dreading when Eva and Alexa square off. Poor Doudrop. Free Piper. 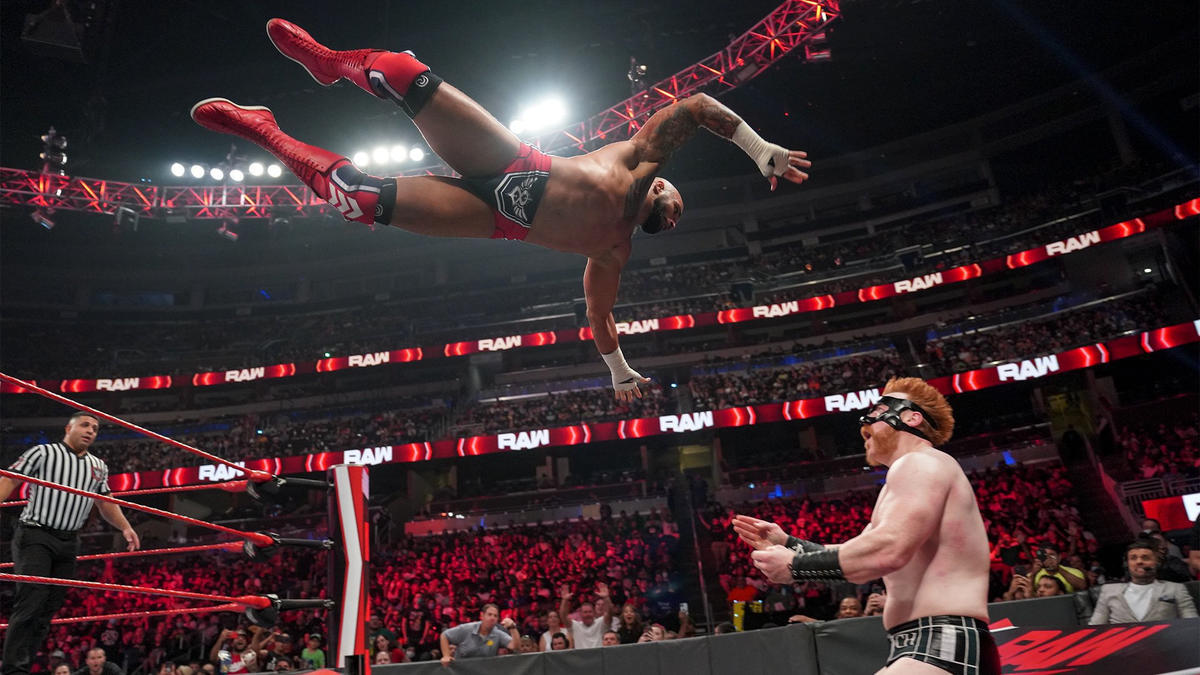 Sheamus takes on Ricochet in a Championship Contenders Match next. The match was really good, given their past history in the Thuderdome. The Fella needs to stop taking these crazy bumps though. That cross body by Ricochet onto the announce table was crazy, but a really cool visual. Sheamus picked up the win with a Brogue Kick after Ricochet ricocheted off Sheamus’s face mask. Damian Priest showed up to challenge Sheamus to a title match at SummerSlam. I expect a title change.

Damiea Priest hung around to take on John Morrison next. As you would expect, Morrison took the loss again, putting Priest over strong for the title match. After the match, Priest used the drip sticks on Morrison before going after Miz. Miz stood up out of his wheelchair and ran away. Good to see that he was not as injured as badly as had been reported. I expect Miz to job to Priest next week.

Mansoor gave Mustafa Ali a nice matching style jacket before Ali’s match with T-Bar. They deserved better than a Three Minute Raw Special, as both are really talented in the ring. T-Bar picked up the win with his old NXT finisher, Feast Your Eyes. After the match, Mansoor cleared the ring so next week, he should beat Mace and SummerSlam found its preshow tag match.

We get some backstage 24/7 hijinks with Reggie, R-Truth, and Akira Tozawa. Nice flipping escape by Reggie, I guess?

Promo Time with MVP and Bobby Lashley is next. MVP sells the SummerSlam match between Lashley and Goldberg well. We all know Goldberg shouldn’t stand a chance here and is just there to put Lashley over. The promo served its purpose and I’m still not looking forward to the match.

Rhea Ripley gets her shot at Nikki A.S.H. next. We get a really good competitive match between the two in a possible preview of their forthcoming SummerSlam match. In the end, Charlotte Flair seagulls in for the DQ ending, saving either from having to take the loss. Charlotte attacks both and comes out strong in the end because, you know, she gave up a clean win last week. I don’t have high hopes for Nikki’s reign continuing on for much longer.

Elias is getting repackaged. Let’s hope he’s less boring and more interesting. I’m sure (Un)Creative will find a way to screw it up.

Main event time has Randy Orton taking on AJ Styles. We are treated to another good match between these two. Omos was kept to a minimum until the finish where Riddle comes out to try to even the odds. Styles flies across the ring for a Phenomental Forearm, which Orton counters into the RKO from outta nowhere for the win. After the match, Randy makes up with Riddle by dropping him with an RKO to close out the show.

There were several good matches tonight as compared to last week. Sheamus/Ricochet and Orton/Styles are both worth a watch. The in-ring action was pretty solid all night.

It’s good to see Randy Orton back. No idea where’s he’s been or how it figures into the storyline yet. I expect a tag title change at SummerSlam.

I’m good with not seeing the 24/7 title anymore.