Welcome to the Payback Reaction, where I offer my take on tonight’s show live from the WWE Thunderdome. As always, you can check out John’s full in-depth review here.

I missed the opening bout between Apollo Crews and Bobby Lashley for the United States Title. Lashley won, as expected, but where does he go from here? I know he’s running with the US Title because there’s no room for him in the WWE Title scene. He’s been built up too strong to drop the title for a while.

When I finally got to turn on Payback, the next match between Big E and Sheamus was starting. The match itself was pretty good, telling a good story. Both guys are power guys and they showed it off here. Big E continues his impressive run and picked up the win after countering the Brogue Kick with a powerbomb into The Big Ending. I like the push Big E is getting and hope it goes right to a World Championship reign. It would be a well deserved accomplishment for him.

Up next was King Corbin taking on Matt Riddle. I honestly do not get Corbin. He does not have anything interesting about him. I also don’t get the appeal of Matt Riddle, but at least he has some exciting moves that get executed during the match. Riddle picked up the win. After the match, Riddle was getting interviewed backstage and Corbin attacked him from behind to make the feud continue. Let’s hope in the next match, Riddle can kick some interesting into Corbin.

Our second title match is up next, the WWE Women’s Tag Team Titles with the unlikely team of Shayna Baszler and Nia Jax taking on the team of Sasha Banks and Bayley. Two weeks ago, heading into SummerSlam, it was looking like the challengers would be Baszler and Asuka. Bayley and Sasha pinball bumped throughout the match. Nia flung Sasha repeatedly into the barricade like she was a Singh. It was odd seeing Baszler and Jax running the face role here. Baszler would eventually blind tag herself in to set up the very creative finish. Jax got dropped with a double back body drop, impressive by Sasha and Bayley, before Baszler goes into full wrecking mode. She dropped the illegal Sasha and hooked her in a Muta leg lock while grabbing Bayley with the Kirifuda Clutch. When Baszler did the takeout to the mat, Sasha was still locked in the Muta Lock and reached over on Baszler. Baszler grabbed Sasha’s arm and used it on Bayley, who was still in the Kirifuda Clutch, and Bayley tapped out. It was a very creative finish that I think Baszler came up with because it seemed too advanced for Creative to think up. I would have liked to have seen both Sasha and Bayley tap out simultaneously, but I’ll take this unique finish. I’m interested to see where the unlikely duo champs go from here. There is the possibility of making them dominate wrecking machines or just short term transitional champs. As for Sasha and Bayley, their breakup is next.

Keith Lee taking on Randy Orton is up next. They’ve fixed Lee’s song and gear, which is good after the odd Raw debut. I had Lee to win but not in the near squash like manner we got. I can’t remember a Randy Orton match where he lost in under seven minutes. I expected a nice long match and instead Lee dominated Orton. I’m happy for Lee and hope that Creative doesn’t screw him up like all of the others in the past. You are likely looking at the future face of the company in Keith Lee. Let’s see how well it goes for him on the main roster. 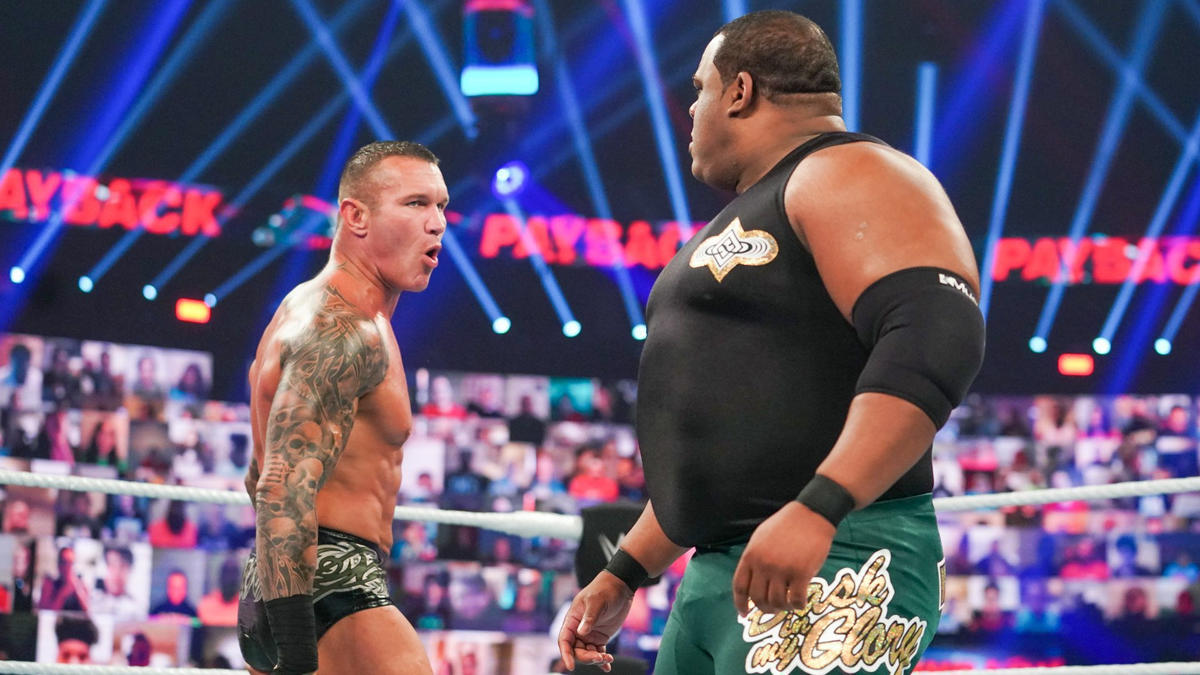 Tag team action is next with the team of Rey and Dominick Mysterio taking on Seth Rollins and Murphy. We got a great fast-paced match that one would expect with Rey Mysterio involved. Dominick continues to impress me. He just gets it, so I’m sure Lance Storm (where Dominick trained) taught him well. I see him holding a couple of singles titles in the future. I know the title doesn’t matter, but let’s do a quick 24/7 title reign just to be able to call him a champion before he wins the tag titles with his dad (WrestleMania perhaps?). Anyway, the Mysterios get their revenge on Rollins and Murphy with Dominick picking up the win for his team by pinning Murphy after a 619/frog splash combo. After the match, Rollins was not happy with Murphy and if Rey wins the match tomorrow on Raw, it’s time to end the Monday Night Messiah gimmick for Rollins. Murphy is the last disciple standing and there really isn’t anywhere else for it to go.

Main Event time with the Universal Title on the line between The Fiend, Braun Strowman, and the returning Roman Reigns. The match starts off between Fiend and Strowman before Reigns comes down. Fiend and Strowman brawl throughout the ringside area while Harley Quinn, err Alexa Bliss, looked on. The superplex spot gets set, with The Fiend superplexing Strowman to blow up the ring. Awesome bump by referee Charles Robinson to tumble out of the ring. That’s the cue for newly turned heel Reigns and his advocate(?) Paul Heyman to appear and take things over. Reigns does a couple of moves before spearing Strowman to capture back his Universal Title to end the show. It’s going to be interesting to see how heel Reigns works. Smackdown is low on top faces at the moment, but I think Big E is the one getting built up to topple The Big Dog, again a likely WrestleMania match. Strowman needs to be that unstoppable monster again while The Fiend/Alexa duo could have some promise on the face side.

The ending to the Women’s Tag Title match was very creative. As I pointed out in my First Time Women’s Champion column, Baszler has the tools if you can build her up as a beast. I think this tag title run could have her come up with some unique match finishes that can do that beast build up.

Dominick Mysterio seems like he is just a natural in the ring. His SummerSlam match was really good and this tag match was great. He seems to know when to be in the right place at the right time to pull off the right outcome. He has a very bright future ahead of him.

Most of the matches were relatively short tonight, clocking in around 10 minutes or so. Granted, SummerSlam was just last week, Payback was over before you knew it. It was easily 30 minutes shorter than SummerSlam. I think a couple of the matches could have gone a tad longer, but they were able to deliver in the time allotted.

Please stay safe as we face our new normal out there.