Welcome to the WWE Hell in a Cell Reaction, where I offer up my take of the PPV. You can check out John’s complete in depth review here.

Quick opener and the pyro goes off, we are ready to go in Sacramento with a new set design.

Becky Lynch and Sasha Banks kick off the show inside the Hell in a Cell structure. After getting the pre-match fighting done outside the cell, they get inside and the car crash begins. These two know each other so well they pull out all the stops in this one. They pull off some crazy spots and, in the end, Becky picks up the win. After the match, the camera focused on a little too much on the fact Sasha was crying in defeat. Could there be a character shift coming?

Up next is the tornado tag with Roman Reigns and Daniel Bryan taking on Luke Harper and Erick Rowan. The tornado tag stipulation made sense for where they were going with the story, but the match didn’t seem to fully utilize it. There was a lot of handicap action with Harper and Rowan wreaking havoc all over the place. Good closing sequence for the babyface victory. A nice touch after the match with Bryan wanting to “hug it out” with Roman. No heel turn yet for Bryan as the mastermind. Maybe Vince forgot that was the direction of the angle.

Unannounced time filling match number one actually made sense in having Ali face Randy Orton. Ali continues to impress and had a good showing against Orton. Ali should have picked the win up after that spectacular counter to the RKO, but took the loss after an impressive counter into the RKO.

I’m not sure what the Kabuki Warriors did to get a Woman’s Tag Title match, but I’m not going to complain. Good showing by the Kabuki Warriors in a do what you can to win type role. Asuka busts out the mist to finally win the titles they should have won months ago. It doesn’t look like the Alexa/Nikki pairing is going to go anywhere, based on how the match went. I was expecting them to do the original Sasha/Bayley storyline with the tag titles. Maybe we’ll see that start on Raw 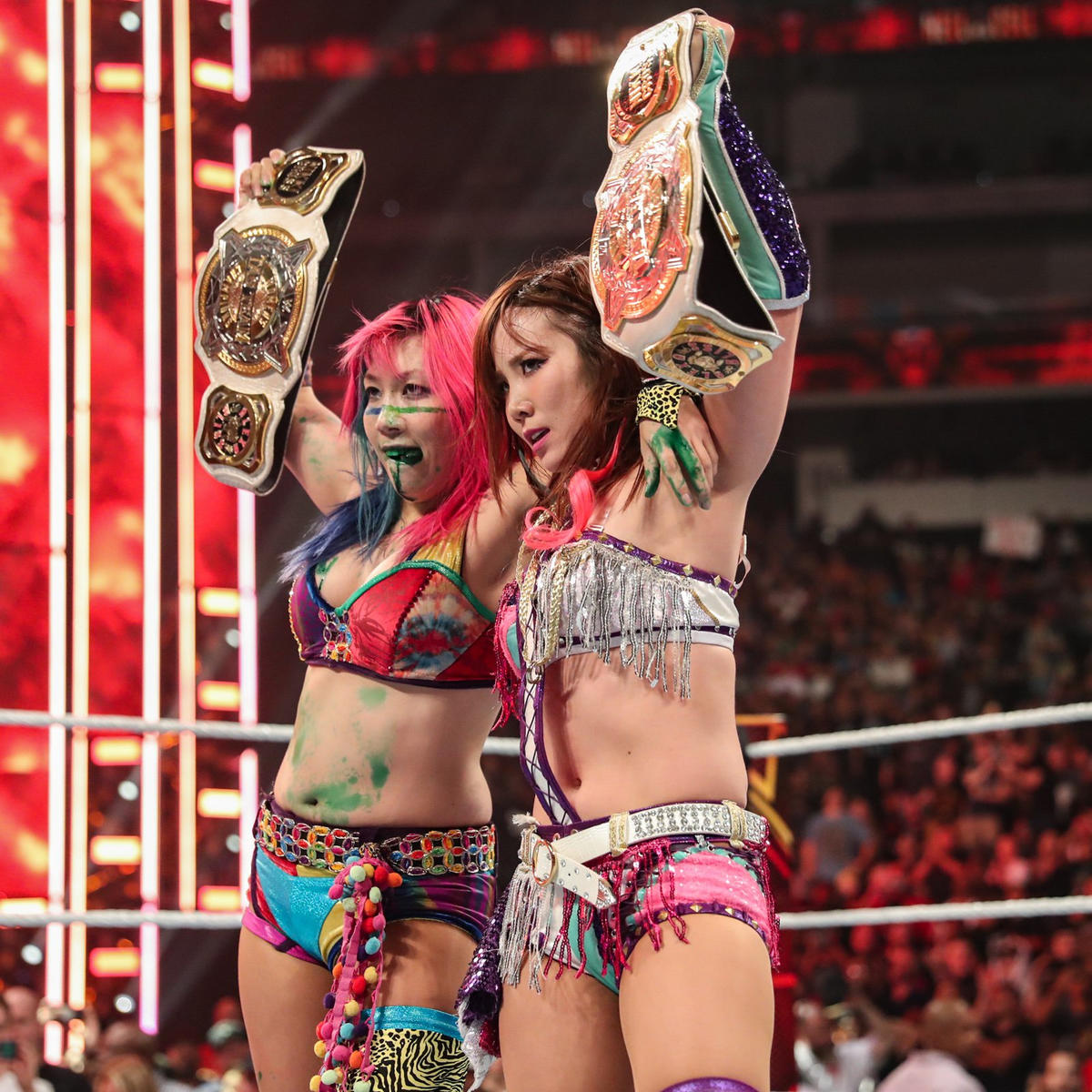 A six-man tag match pits The Viking Raiders and Braun Strowman against The Job Squad aka The OC. I’m glad that The Viking Raiders finally has something meaningful to do and are not suffering from the dreaded 50/50 booking, but what has Gallows and Anderson really done without having AJ with them? Great showing from all involved, but since nobody could really take the loss here, let’s do a DQ ending instead. Everyone gets their spots in after the match and Strowman goes all Big Show on AJ with a right hand. AJ should get an Oscar for the sell job.

Baron Corbin starts off with Vince fed short jokes towards Chad “Shorty” Gable. The match itself was pretty decent but went a few minutes too long. Gable picks up the win, but gets beat down later in the night.

Bayley and Charlotte Flair had a really great match as expected, given their history together. I’m a big fan of the Charlotte victory, but it seemed necessary given the Christian like response Bayley had after the match. Could she be getting a character tweak as well?

Our main event is the Hell in a Cell match between Rollins and The Fiend. The red lighting was different, but boy did the WWE back themselves into a corner with this one. The match was acceptable, but the booking was absolutely terrible. Instead of having Rollins get help in his match, we go with a Dusty Finish by having Rollins get DQ’d (or ruled a no contest) for trying the kill The Fiend with a sledgehammer. The massive facepalming continued as The Fiend popped up about a minute later like nothing happened and destroys Rollins to end the show.

Let’s take a look at the highs and lows from the show.

Ali had a really good match against Orton. The RKO counter into a pin to a move into the RKO was pretty unique.

The opening Hell in a Cell match was the best match of the night. I wonder if there was any significance to the zoomed-in on Sasha crying or if they just forget about it?

Someone needs to tell Charlotte to stop doing moonsaults. She’s not very good at it. She’s too tall to do it into the ring and always overshoots.

The main event was an absolute disaster. This is what happens when WWE books themselves into a corner and hurt both men in the process.

That’s all I’ve got for Hell in a Cell. See you after Raw.