Aside from the wonderful news that Miz and Maryse celebrated the arrival of their baby daughter, Monroe Sky Mizanin, there’s been little big news around WWE this week. There have been a couple of injury stories concerning Shane McMahon and Dean Ambrose, but little else to get stuck into, and it’s no surprise seeing as WWE is fully gearing itself up for Wrestlemania next weekend. I hope that stays the same so the shine isn’t taken off the big event and the fans enjoy the PPV, so with little to stir my mind, I thought about writing something a little light-hearted this week and do a little stirring myself. What if WWE booked a Wrestlemania that managed to piss off the entire WWE Universe? Shall we have some fun? Perhaps one of these may even come true…. 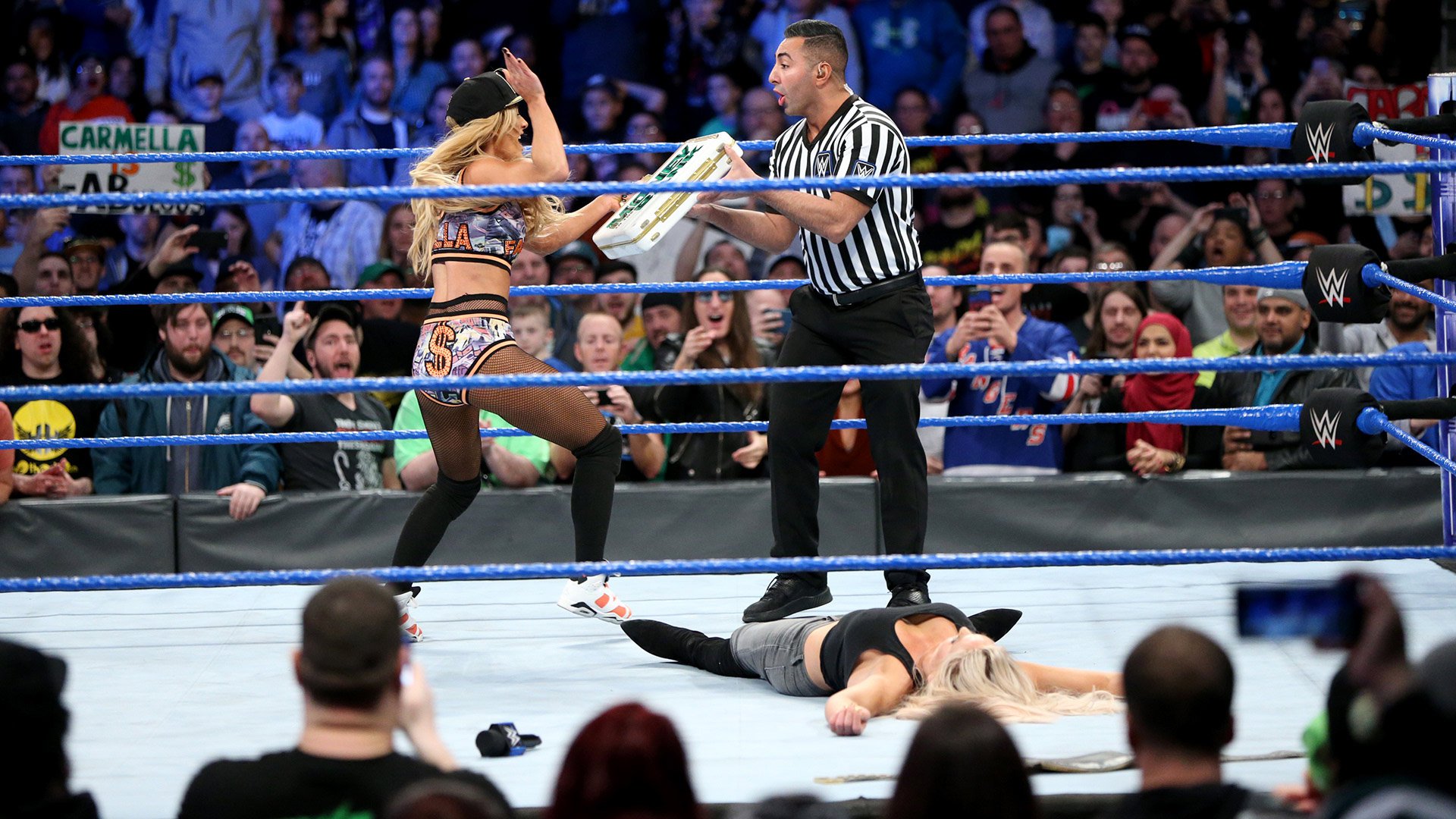 Booking to Upset Fans – Charlotte Flair vs Asuka vs Carmella

Yes folks, you read that right. One the eve of the PPV or right before the bell rings, Carmella decides to emulate Seth Rollins and cashes in her Money in the Bank briefcase to get her title shot. She doesn’t want to wait for one of the best women wrestlers in WWE to be holding a title aloft whilst panting and weak from a tremendous match that has the fans applauding, no she wants in right at the beginning. Would this piss off the fans? I think so. Charlotte vs Asuka has been billed as a dream match and a potential show-stealer. Carmella added to the mix dilutes it a hell of a lot. It would rob us of the match-up we want to see. All that build, all the bravado and bragging ruined in one fell swoop. To make it worse… Carmella wins by pinning Asuka. The Undertaker vs John Cena

Imagine it; finally John Cena gets his reply from the Undertaker – he will face off with him on the grandest stage of them all. With a colorful and raucous entrance done, Cena waits for the Deadman. Whether its old school Taker with long coat and jet black hair, or the return of the American Bad Ass, the crowd are in awe at the iconic moment before them in the ring. Though not the stature of Hogan vs Rock, there is that electricity in the air, and fans breathe it in thinking ‘this may just be a good match and worth all the hype’. Then, as they lock up and trade blows, Cena hits two flying shoulder tackles, treats the thousands in attendance to a five-knuckle-shuffle and then with one swift Attitude Adjustment, pins the Undertaker in the middle of the ring for a count of three. The match is shorter than Undertakers entrance. Would it be worth it? Would it give Cena that much-needed push he so richly deserves? Why did the Undertaker even show up? Stranger things have happened – hell, I almost bet £100 that Taker would beat Brock Lesnar at Wrestlemania a few years back. I’m so glad I didn’t.

Strange as it may seem, this is honestly one scenario I can see happening. With rumors not so long ago of WWE looking to legitimize Steph as a WWE in-ring talent, what better way to do it than have her defeat Ronda Rousey in her debut match? This is a swerve and then some, if true. The build, the anticipation, the entrances, the pedigree (no pun intended) of Angle, Triple H and Rousey all thrown together. It should be great and if rumors of Rousey’s quick adaptation to the WWE ring are true, it should be great show. What could really catch the fans off guard? What would Vince McMahon think would be a good move and a real talking point?

“I’ve got it!” he shrieks at a booking meeting, “We make Steph pin Rousey in the ring.”

“But Vince,” Triple H mutters across the boardroom table, “That’s great and all, but we can’t have Ronda lose her debut match.”

“Huh?” replies Vince, staring wildly at his son in law. “Why not?”

“Because we should think about the long game here.” Triple H replies. “Have Ronda go undefeated for a year, then next year we have her go off against Asuka at Wrestlemania. The fans would love that.”

Vince scowls as he utters his reply.

“I didn’t build this company into a billion dollar industry because I cared what the fans think, dammit. I built it with story-lines and swerves. It’s a rib on the fans, Paul. Don’t you get it? I’ll show the UFC what a PPV is. I’ll show them what their golden girl is like when she faces a McMahon.”

“No buts, Paul.” Vince snaps. “It’s done. Steph over Rousey. Now, onto next week’s business; have we signed Hogan back yet? I want to have AJ Styles face him for the title.”

I shudder to think…..

Well, there you go, dear readers. Three little swerves that would piss off the WWE Universe. I didn’t want to write anything about Roman Reigns or Brock Lesnar’s match, because I think either man winning will irk a big percentage of fans regardless. I hope you enjoyed this little take on what could be and the little Vince dialogue around the booking table. If you did, let me know and I may do some more (if John allows me). If you didn’t, that’s fine too. We’ll forget it ever happened and never speak of it again.

Take it easy everyone, for those enjoying a holiday this time of year, have a great time. My fridge is packed with chocolate Easter Eggs. They’re for the kids, of course, but I’m sure they won’t miss one or three. As always, thanks for reading.