Welcome back TJR readers! Did you spend all day Friday trying to finally buy WWE tickets and miss Smackdown? Perhaps you spent all day Monday morning the loss of a pig and missed Raw. Worry not, for I have returned with another edition of the Top Ten Wrestling Stories of the Week.

Karrion Kross’s opponent for NXT Takeover In Your House 2021 will be decided this week on NXT. This past Tuesday, Kross successfully defended his NXT World Championship against Finn Bálor, in what was an excellent match. Earlier in the show, it was announced that there will be a Triple Threat Match between Kyle O’Reilly, Pete Dunne and Johnny Gargano. The winner of that match will now go on to face Kross at NXT Takeover In Your House. As for Bálor, he stated this week that he feels like he is ready to return to the Raw or Smackdown roster. Bálor clearly feels that he has exorcised any Demons from his last main roster run. (TJRWrestling)

9. Shinsuke Nakamura Gets a Guitarist

Rick Boogs made his debut this week on Smackdown. Boogs came out with his electric guitar and interrupted a pre-match promo by King Corbin. Boogs then told Corbin that he came to rock with the real King of Smackdown. Shinsuke Nakamura then came out, as Boogs played his guitar along with Nakamura’s entrance music. Nakamura then went on to defeat Corbin, while Boogs played his guitar at various times in the match. Boogs is actually officially a two-time 24/7 Champion, as he won the title twice when he played Joseph Average in the WrestleMania 37 Old Spice Commercials. So anyone who thought “Zombie Lumberjacks” was an all-time low, please remember the sentence “won the title twice in an Old Spice Commercial.” (TJRWrestling)

LA Knight now appears to have some big money backing him up. This week on NXT, Cameron Grimes and Ted DiBiase had a Million Dollar Face-Off. Grimes demanded to know why Dibiase had continually embarrassed him over the last few weeks. Dibiase admitted to treating Grimes poorly, before stating that he is in NXT to find the Million Dollar Legacy. Before Grimes could respond to this, LA Knight came down to the ring. Knight then attempted to convince Dibiase that he is the person that he is looking for. Knight then proceeded to attack Grimes, while Dibiase looked on. Dibiase then did his signature laugh over Grimes, before leaving with Knight. WWE may have wanted to bring in Virgil for this storyline as well, but found his asking price of an order of Olive Garden breadsticks and some meat sauce to be too high. (TJRWrestling)

After weeks of waiting, Franky Monet finally debuted on NXT. Monet easily defeated Cora Jade in her debut match. After the show, Monet was interviewed and called out NXT Women’s Champion Raquel Gonzalez. Monet said that the entire NXT Women’s locker room has a target on their back, especially Gonzalez. Although not ideal, having a Target on your back is more desirable and less likely to give you a STD then having a Walmart on your back. (TJRWrestling)

6. Kofi Kingston and Drew McIntyre to Face Off in Number One Contenders Match

Kofi Kingston is officially in the WWE Title picture once again. This past Monday on Raw, Kingston and Drew McIntyre faced off in a number one contenders match. Before a winner could be decided, Bobby Lashley interfered causing a No Contest finish. This prompted an angry McIntyre and Kingston to demand a solution from WWE Official Adam Pearce. Pearce decided that Kingston and McIntyre will once again face off this Monday on Raw with the winner facing Lashley at Hell in a Cell for the WWE Title. Pearce then told Lashley that if he interferes in the match he will be suspended for 90 days, or what feels like three episodes of Raw. (TJRWrestling)

Monday Night Raw is once again going through an announcer change. It was announced this week that WWE had released Adnan Virk. Virk had just recently joined the Raw announce team on April 12th after WrestleMania 37. Virk clearly struggled in his new role, forgetting the name of moves and wrestlers often. Former UFC and American Ninja Warrior announcer Jimmy Smith is taking Virk’s place. Of course, just like anything with Raw, this could change five times before Monday and not be truly decided until twenty minutes into the show. (TJRWrestling)

4. WWE Releases a Large Number of Employees Including Tom Phillips

Somebody had to run to the store and buy more garbage bags for WWE this week. This past Tuesday WWE released more than 60 of their office employees, with WWE Studios reportedly getting hit the hardest. WWE wasn’t done “wishing people the best in their future endeavors”, as they also released former Raw announcer Tom Phillips. Phillips had worked for WWE since 2012, and besides Raw had also worked on Smackdown, NXT, Main Event and 205 Live. Phillips was actually who the previously mentioned Adnan Virk replaced on Raw last April. Phillips also did backstage interviews for WWE, where at 6’0″ tall he was often made to look smaller on camera than the superstars he interviewed. This of course is the complete opposite of most men, who try to look much bigger on camera. (TJRWrestling) 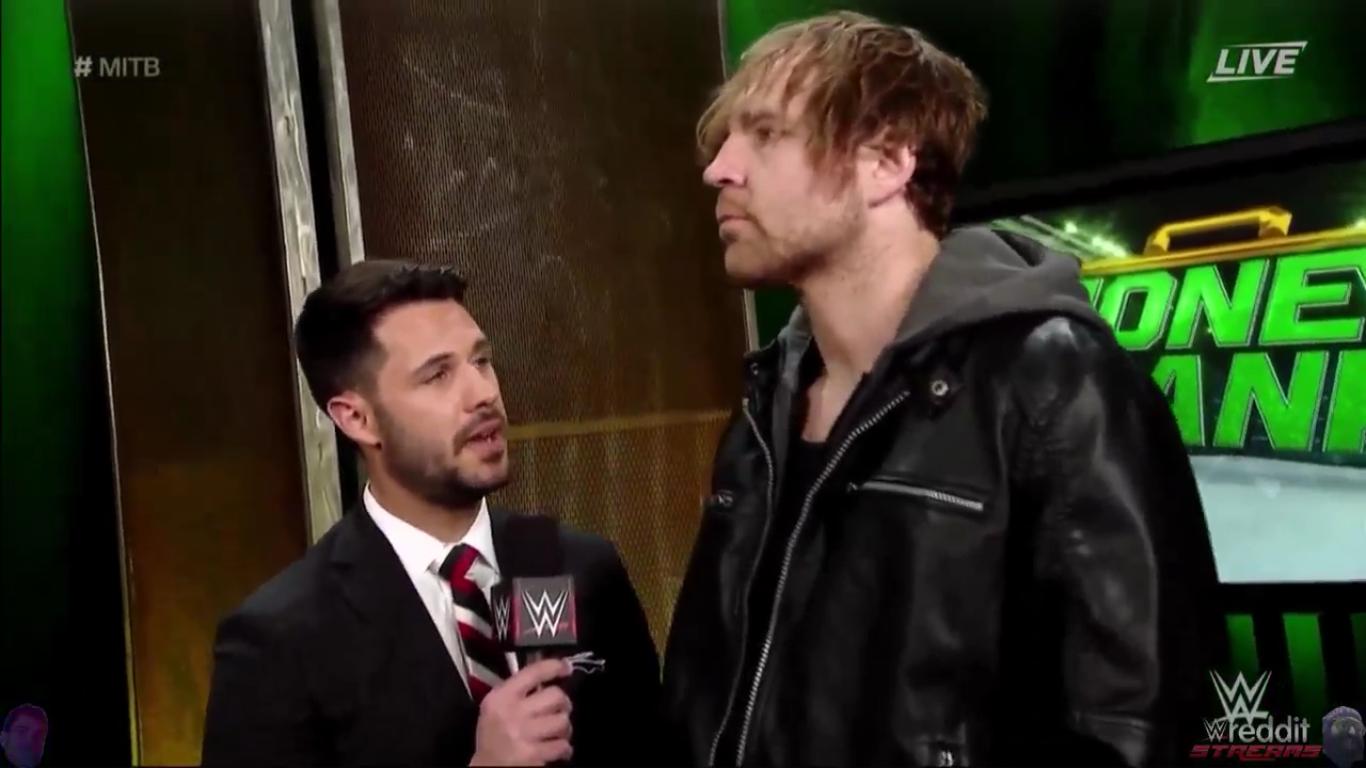 After several weeks of vignettes of Aleister Black reading from “Tales of a Dark Father”, he finally returned to Smackdown. The main event of Smackdown this week saw Apollo Crews defend the Intercontinental Championship against Big E, Sami Zayn and Kevin Owens in a Fatal 4 Way match. Just when it appeared that Big E was going to win the match, the lights went down and fog filled the arena as a hooded Black walked to the ring. Black then removed his hood, before entering the ring. Black then proceeded to hit the Black Mass kick on Big E, allowing Crews to pin him for the win. We will have to see if Black continues to read from “Tales of a Dark Father” or if he had to give the book back to Shane McMahon. (TJRWrestling)

2. WWE Going Back on the Road Starting July 16th

After over a year of waiting, WWE will finally be going back on tour. Starting on July 16th, WWE will be partaking on a 25 city tour. The tour will kick off with a live edition of Smackdown in Houston TX. This will be followed by Money in the Bank which will take place on July 18th from Fort Worth TX. Tickets went on sale for both these events on May 26th. Texas is a smart place to start touring as the WWE will not have to worry about COVID Restrictions and can buy as many Machine Guns as they want. (TJRWrestling)

BREAKING NEWS:@WWE returns to live events with a 25-city tour running through Labor Day. The tour starts with the July 16th Friday Night #SmackDown at the @ToyotaCenter in Houston, TX! pic.twitter.com/TjRAqxv3Bf

1. AEW: Double or Nothing to Take Place This Sunday

AEW’s next big PPV event titled Double or Nothing will take place this Sunday at 8PM ET. The card for the show is stacked, with many huge matches scheduled. There will be a Casino Battle Royal match, with the winner getting an AEW Title Match. Cody Rhodes will go one on one with Anthony Ogogo. “Hangman” Adam Page will face off with Brian Cage. Miro will defend the TNT Championship against Lance Archer. Jon Moxley and Eddie Kingston will attempt to become AEW Tag Team Champions when they face The Young Bucks. Sting will return to the ring when he teams up with Darby Allen to face Scorpio Sky and Ethan Page. Hikaru Shida will defend the AEW Women’s Championship against Dr. Britt Baker. A triple threat match will be held with Kenny Omega defending the AEW Heavyweight Championship against PAC and Orange Cassidy. Finally, The Pinnacle will face The Inner Circle in a Stadium Stampede Match. If The Inner Circle loses this match they must disband. With all these matches scheduled, AEW will have an impressive 18% of their total roster on the show. (TJRWrestling)

That will conclude another edition of The Top Ten Wrestling Stories of the Week. Thank you for taking the time to read this each week. I will be back next week with even more bad jokes! If you like what I do, despite my jokes being as bad as giving Alexa Bliss a BLT, then feel free to listen to my brand new podcast The Smark And The Noob and follow me on Twitter @Fowlerwrestlin1.