Every professional wrestler has this dream of a glorious career where they headline Wrestlemania and win the WWE title in front of 70,000+ people. On a very, VERY rare occasion, that happens relatively exactly as they dream it. There are guys like Brock Lesnar or Hulk Hogan or Goldberg who just walk into the promotion and within months they’re riding high at the top of the mountain. For everyone else, the trip isn’t so straight-forward. The powers that be in the company will look at those guys and say, “You’ve got something, but you still need…something.” What happens to those guys? How do they prove that they deserve a spot at the top of the proverbial mountain?

Let’s look at Daniel Bryan. He’s one of those guys. WWE didn’t know what to do with him, so they basically said, “F*** it, put him in a comedy duo with Kane to keep him busy.” Despite some shoddy writing, Daniel Bryan is one of those guys who can turn a turd into solid gold just because he’s awesome. Team Hell No was born, and it wasn’t long before millions of people found themselves entranced by this unlikely pair who, through some miracle of God, made a ridiculous gimmick of two polar-opposite cartoon characters click. When the day came for the inevitable split, Daniel Bryan was catapulted by the momentum of that tag team and climbed to heights that no superstar had earned in years. Sure, there’s the terribly tragic story of what happened after he made it to the top, but it’s very hard to deny that his brief time at the top was one of the most amazing moments in the history of WWE. 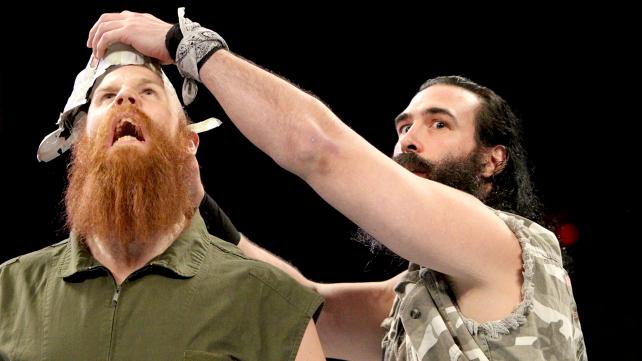 WWE has this habit of tossing two guys together then they have nothing better for them to do. We just saw it last week as Erick Rowan, who had been floundering as a loser midcard babyface, rejoined his former teammate, Luke Harper. Shawn Michaels, Steve Austin, The Shield. All of them were part of a team that was essentially two (or three) guys that needed something to do to earn their pay, but all of them far exceeded what was asked of them and honed their skills and proved themselves to both the fans and the controlling forces of the company. The story of The New Age Outlaws isn’t even the story of one of the guys becoming a huge face of the company, but rather the team itself becoming legendary to the legacy of the Tag Team Championships. The list goes on and on of guys or teams that were made in a tag team. The Dudleyz, Edge and Christian, The Hardys, the Road Warriors, and in the instance of The Rock ‘N’ Sock Connection it’s the story of two already-established top guys trying something new and succeeding in incredible ways.

Aside from that glaring beautiful time when The Shield firmly controlled the tag team division, for years it has been a floundering area in WWE programming. I can’t really pinpoint the exact spot that it began to decline, but the late 2000’s and early 2010’s have had a very small number of memorable teams. There were The Chick Magnets, The Hart Foundation, Big Show/Chris Jericho, and a few others that made a bit of a splash, but overall the teams were a dead spot in the WWE’s lineup. Many times the titles would go weeks or months without being defended, and even more often the tag champions would be beaten in handicap matches by one top guy who needed to look dominant.

This all brings us to 2015, where we somehow don’t yet have self-lacing shoes, hoverboards, flying cars, laser cannons, or rampant artificial intelligence that threatens our very species. The future is so much more boring than I dreamt it would be in 1999. I guess we do have handheld devices that connect us to the entire planet and all the known documented knowledge of human history, but I’m still kinda sad that we don’t have mechsuits or teleporters. What was I even talking about? Oh yeah, tag team wrestling in 2015. If you read my weekly Smackdown reviews (if you don’t then what the Hell are you even doing with your life?), then you’ll know how much praise I consistently have been giving A New Day and the team of Cesaro and Tyson Kidd. On a weekly basis these guys are the absolute highlight of a show that sometimes can be a little tedious to watch, considering it’s 80% replays of other stuff that happened on other shows. A New Day is a group of three midcard guys who really didn’t have anything to do to justify their beefy contracts with WWE. Big E basically disappeared after his split with Dolph Ziggler, with an occasional match here and there that no one can recall. Xavier Woods did something a couple years ago, but I can’t even remember what. I’ll remember it in a minute and not go back and type it in, just to prove my point that he just hasn’t done anything that great. Kofi Kingston is the smiling babyface who has been doing the exact same thing for years and, since 2009, has been losing more and more crowd support and momentum as a performer. Together they are brilliant. They are a group of guys who are reinvigorated by their new gimmick and who have completely reformed themselves as an insanely entertaining threesome of excited, overreacting guys that deliver great matches and promos every time they hit the ring.

Cesaro and Tyson Kidd are the absolute perfect feud for A New Day. Kidd, who had been a part of the Hart Dynasty a few years back, was relegated to the guy who could put on good matches with anyone, sometimes working two or three matches in one night, but always losing because it was his place to make others look good. Cesaro is, in my humble opinion, the most talented in-ring competitor in WWE right now. I’m not the only one who sees his immense talent, but the guys in charge have long been somehow blind to it. Now these two are slapped together, and the result has been every bit as beautiful as we could have imagined.

Now the WWE Tag Team division includes these two teams, The Ascension, The Prime Time Players, Luke Harper and Erick Rowan, Los Matadores, and the Lucha Dragons. That’s a very, very good lineup of performers (Los Matadores is maybe a little outclassed). But it’s not simply a tale of teams who are slapped together with this current roster, but instead it is combinations of guys who really, truly dedicate themselves to the special craft of tag team wrestling. They tag in and out quickly to look like a well-oiled machine, they have detailed group entrances, and, most importantly, they have tag team moves that serve as finishers. These aren’t guys who are hoping they can get a push after their team is split, but instead they are guys who have made tag team wrestling the most entertaining and fun part of WWE programming for the past few months.

All the credit in the world goes to Tyson Kidd and Cesaro for really stepping up as a team, but that was really only the catalyst that sparked new interest in the division. The other teams have always been very good, but now they are being given a chance to shine and a chance to show the world how unbelievably talented they are. Too often we love to complain about what the WWE does wrong because it’s just so easy sometimes. This is an instance where we need to forgive them for a few missteps because they have done such a phenomenal job of making us care about their tag teams again. The least popular of the teams seems to be The Ascension, but anyone who watched them in NXT will know that they have far more to offer than what we have seen since their main roster debut. All of these teams are great talents, and I, for one, am beyond elated to see what they can pull off in the huge upcoming Elimination Chamber match when six of them all get together to cause an unheard-of amount of carnage.

I have an obligation to whore out my social media life because the internet is basically just one, big popularity contest. So do me the honor of giving me just a slight boost so that I can say, “I have so many followers!” on job applications and stuff. @JakobDraper over on Twitter is really the only place you can find me right now, but I’m sure I’ll be joining others at some point and I’ll throw all of those here for you so you can stalk every moment of my every day during every moment of your every day. Also, you should really go for a walk or something. This obsession with me is unhealthy.