Jon Moxley, Jonathon Good or Dean Ambrose; whether we are talking about the wrestler or the individual behind the wrestler, the discussion is the same. It was announced that around the time of the Royal Rumble that the man known as ‘The Lunatic Fringe’ would be leaving the promotion at the end of his contract. Why it wasn’t mentioned until the news of it broke on the WWE’s official website, no one seems to know. This wasn’t a case where there were hints or rumors and speculation online. During the weeks that followed, questions were raised about this announcement and why it was made. One thought is that this is part of a new initiative by WWE to ‘break the fourth wall’. The company has never publicly discussed talent contracts; after all, if they mention it who does it truly benefit? But in this instance, fans are getting a look behind the curtain into what is going on regarding a wrestler’s professional dealings. But perhaps this is all ultimately leading to something completely different altogether.

There was one time when a wrestler shared how he would be leaving the company and taking the WWE championship with him: in 2011, CM Punk was engaged in what was a revision of an old storyline that he was part of while in Ring of Honor. For those that are not aware, the ‘Summer of Punk’ in ROH was based on truth; Punk stated that he was going to leave the company with the championship and head to WWE. Was it a reflection of the highly regarded independent star ‘selling out’ for the greener pastures of Connecticut? As noted, it was rooted in truth to it as he did ultimately depart Ring of Honor for the WWE.

So after a few years in WWE, Punk engaged in a similar angle, in something referred to by wrestling fans as ‘Summer of Punk 2.0.’ At the time he was leading The Nexus, and he stated that he was leaving the company after defeating John Cena for the WWE Championship at Money in the Bank 2011. Vince McMahon did his best to prevent Punk from leaving with the championship, going as far as to try and ‘screw’ him by attempting to have the referee ring the bell, but Cena, as many will recall, did everything he could to prevent that from happening. He wanted to win the match honorably because that reflected who he is, fundamentally. Punk ended up defeating Cena for the WWE Championship, and then in a moment etched in time he blew a kiss to McMahon as he left through the crowd with the title.

With Ambrose, nothing like this has occurred. He has largely been on the periphery, not involved in any storylines too seriously. In his most recent angle, he was embroiled in a feud with his Shield-brother Seth Rollins, something that signified the end of the faction. He wasn’t engaged in a meaningful program after that. Reports have come out that he was unhappy with the creative direction of his character, and felt the stories he has been in have been hokey. But that is a discussion that happened behind the scenes, he hasn’t been publicly quoted as wanting out. Beyond that, the same reports have also said that Bruce Prichard and Roman Reigns are among those that have tried to convince him to stay.

It could very well be that this is the end for Ambrose in WWE. However, we would be remiss if we didn’t wonder why commentators have outright stated that Ambrose’s future is ‘up in the air’. Those comments were made even as he was defending the honor of Roman Reigns. Whether it was a falls count anywhere match or a no holds barred match, Ambrose was an active participant in the build to the Roman Reigns vs Drew McIntryre’s match at Wrestlemania (he put over McIntyre twice on Raw), but he was essentially a tool used in the telling of those men’s story. 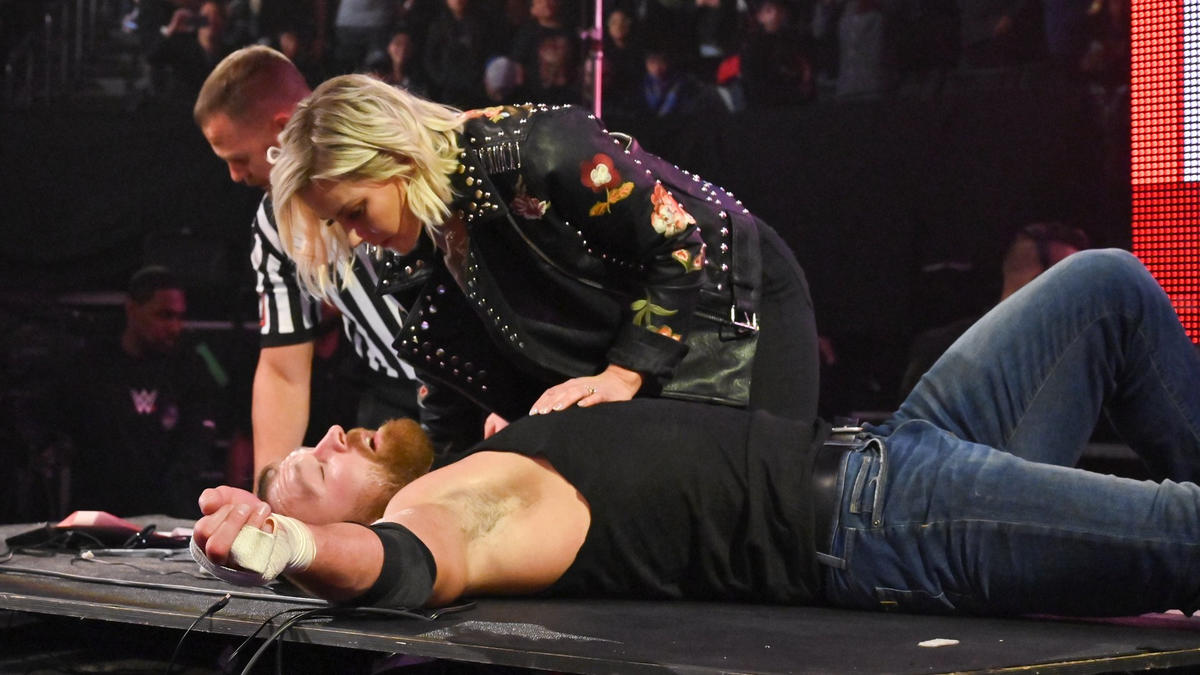 If a Spring departure exodus is going to take place, then why not have him deliver a promo about the entire situation? Whether it is a ‘shoot’ or a ‘work’ or a ‘worked-shoot,’ at the very least he could address the rumors. To leave without a whimper doesn’t reflect his lunatic nature. That said if he is departing, addressing it could be painful for both him and his wife, WWE commentator Renee Young. Young will often go silent while Ambrose is in the ring. At times she did defend his stance during the feud with Seth Rollins, but other times she remained silent and didn’t address his actions.

This Spring of Ambrose tour is wrapping up this Sunday with The Shield’s last match airing on WWE Network. The Superstar Shakeup is over and Ambrose wasn’t mentioned at all. With Fox bringing in Smackdown Live this Fall, and the potential of a third hour appearing on their sister network FS1, Ambrose’s role could have a greater impact on a different WWE related program. There is an opportunity for Ambrose to push current booking boundaries and mention other promotions, not just break the fourth wall but go completely off script. It would certainly hearken back to Punk’s pipebomb promo nearly a half a dozen years ago.

Ambrose’s departure is big as he has played an active role within the company, either in singles or tag team action. While he hasn’t held a major WWE Championship since he lost the WWE Championship to AJ Styles in 2016, that doesn’t mean he will never return to that position. It seems as though the company tends to take their time in giving smaller talent a chance to recapture a major championship. As with Rollins and Finn Balor,Ambrose is coming off major arm surgery, and perhaps that made the company apprehensive. But with that injury behind him, he could prove that he can better direct how his narrative should be told. Ambrose is committed to his craft, and after seeing his recuperation journey on the ‘WWE Chronicle’ program, being away from the ring drove him insane (no pun intended).

As soon as he was physically able, he returned to the ring. After doing so, he rekindled friendships and allegiances but really didn’t have an opportunity to excel on his own. The question arose whether he was going to get a push on his own without any alliances. After his return, he was immediately aligned with Seth Rollins, and from there the Shield came together. It was a few months after that, he fell out of favor with Rollins. One can see how his reported frustration was justified. After his program with Rollins ended, it seemed as though he was positioned to have an intergender feud/match/rivalry with former WWE Raw Women’s champion NiaJax. There may very well have been some level of trepidation in doing so. In hindsight, it could have been a revolutionary opportunity that showed fans that women wrestlers are their male counterparts equal, and should be seen as such. WWE went so far as to advertise an intergender match between Ambrose and Jaxfor live events in some cities, though none ever took place.

What had to be frustrating was that he went from contending to championships to be as far from the titles as he could possibly be. While he did briefly hold the Intercontinental Championship after turning heel, it was so short-lived it is easy to forget. On the eve of Wrestlemania, and on the event itself, Ambrose was nowhere to be seen. It feels like a missed opportunity not to have him address his departure. If given creative freedom, he could speak out about a number of things, including what he is and isn’t happy with as it pertains to his character’s direction. And we could have another case of a commentator walking off during the broadcast, much like Joey Styles did when he took over commentating for the WWE’s ECW brand, with Renee Young playing that part.

With Money in the Bank approaching, there is a chance he could make an unscheduled appearance and insert himself into that match. Though not booked to take part, he could climb the ladder while those actually involved in the match are deemed incapacitated and walk out with the briefcase, which he could then use to get a championship match of his choosing at any point in time. There was never a stipulation that said the contract couldn’t be used by someone that was not contractually signed by WWE. Such a booking would embrace the spirit of the Summer of Punk, just with a different wrinkle.

Ambrose could once again be put that position as being the flagbearer for the company. That is a position that he held well in the past, and fans were responsive. While the hope of many is that he stays, they could play up his departure more and weave in more fourth wall breaking elements. He could reference his time on the independent circuit with promotions such as Heartland Wrestling Alliance and Combat Zone Wrestling. You have to know that if that happened Les Thatcher and DJ Hyde would be smiling. The Spring of Ambrose could certainly take place, the creative team just needs to get behind the idea.